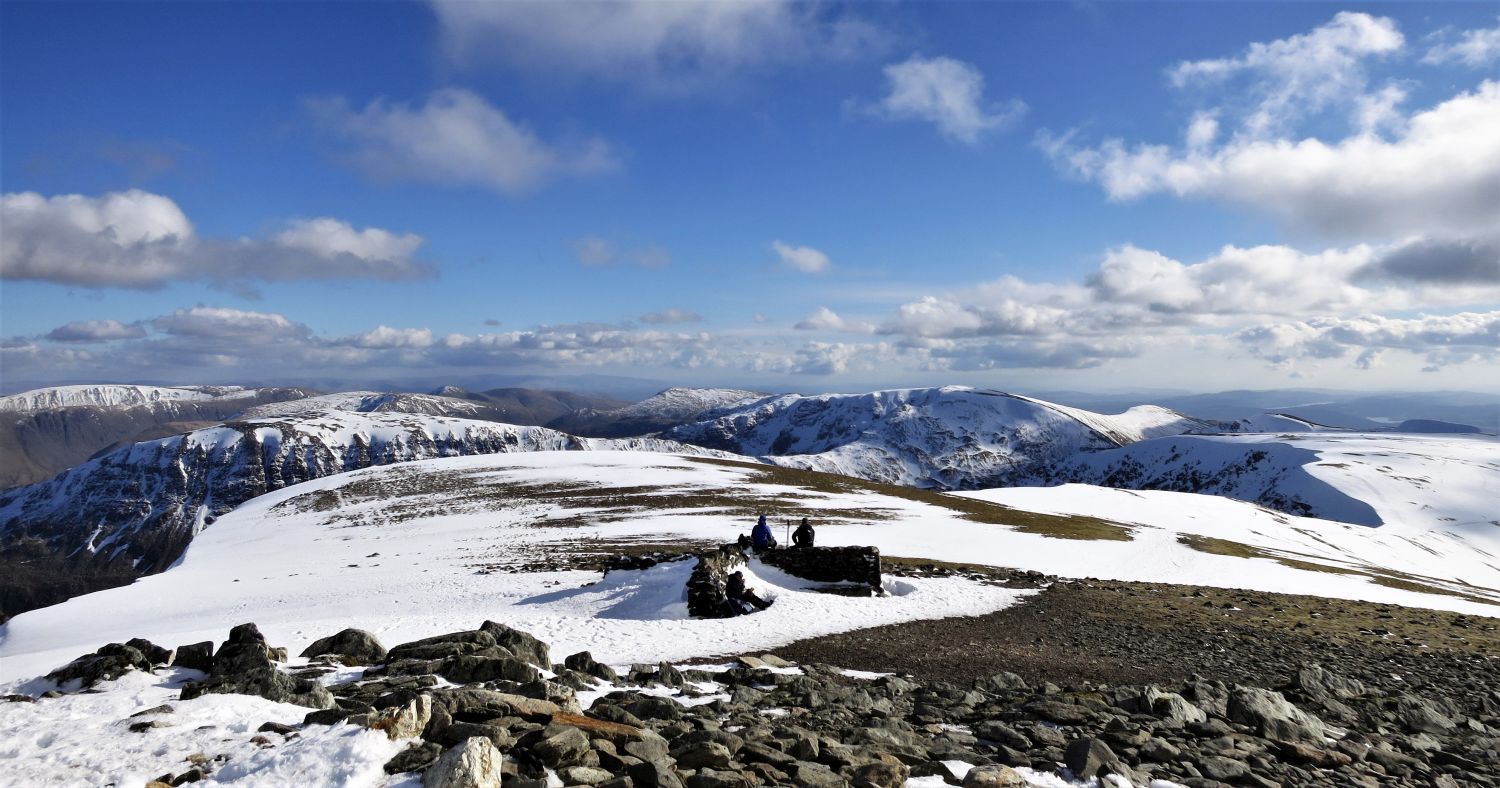 Have you got Seat Sandal and Glenridding Dodd annoyingly left on your Wainwright bagging list? Well I did, and this superb linear route includes them and the Helvellyn Range as a bonus. With Swirral Edge included also, there’s no better time than in full winter conditions, however, please note that Swirral Edge in winter is a serious scramble and suitable clothing, an ice axe and crampons, are essential. The walk from the top of Swirral Edge, over Helvellyn, Nethermost Pike and Dollywaggon Pike, is a nice steady plod compared to the hard ascents up Birkhouse Moor and Seat Sandal.

If you choose to use the bus service, a bus stop is conveniently placed at the start of the ascent into Mossdale, and at the end outside the Travellers Rest on the A591; Keswick would be the perfect base if that method is chosen. 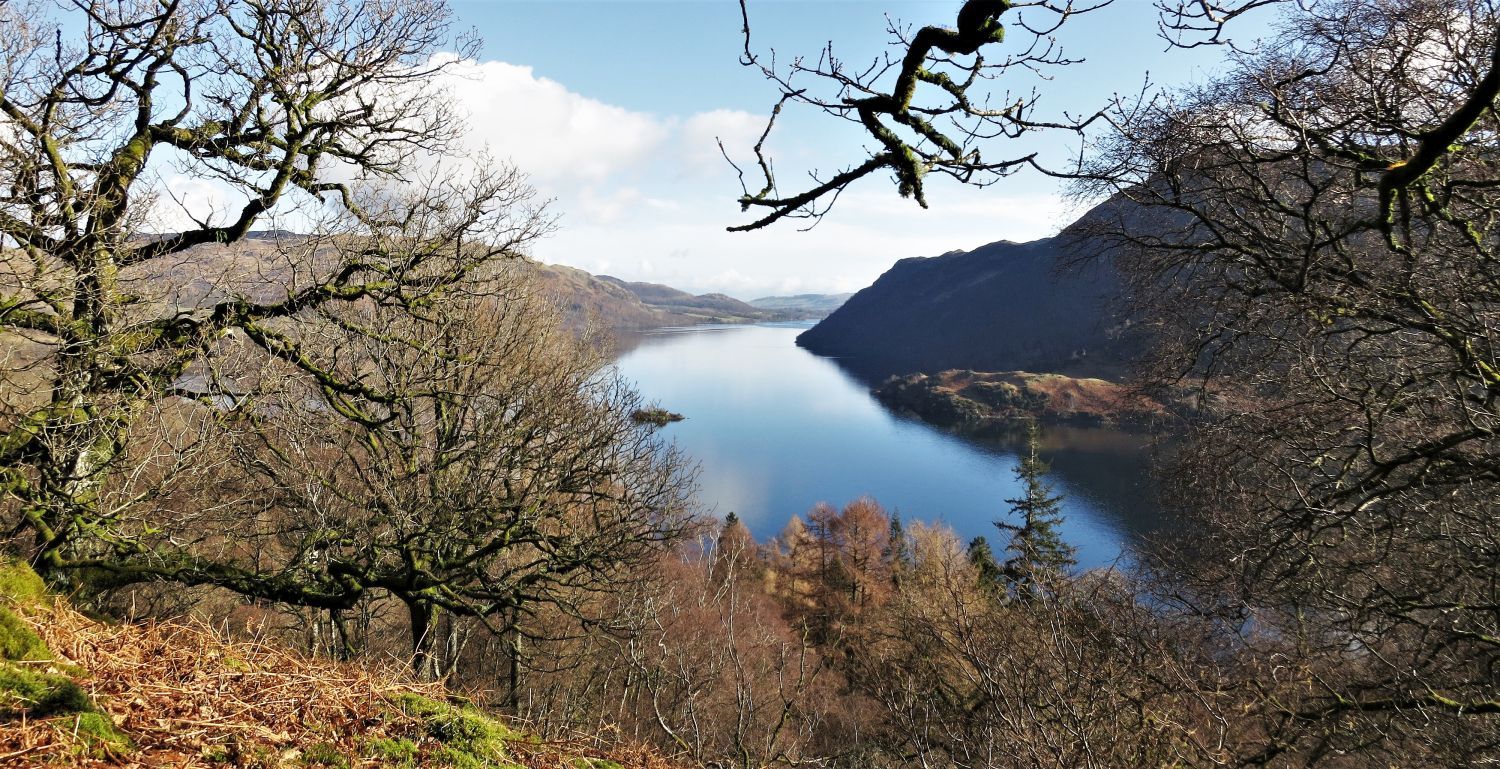 You won’t see a single soul while ascending through Mossdale 🙂 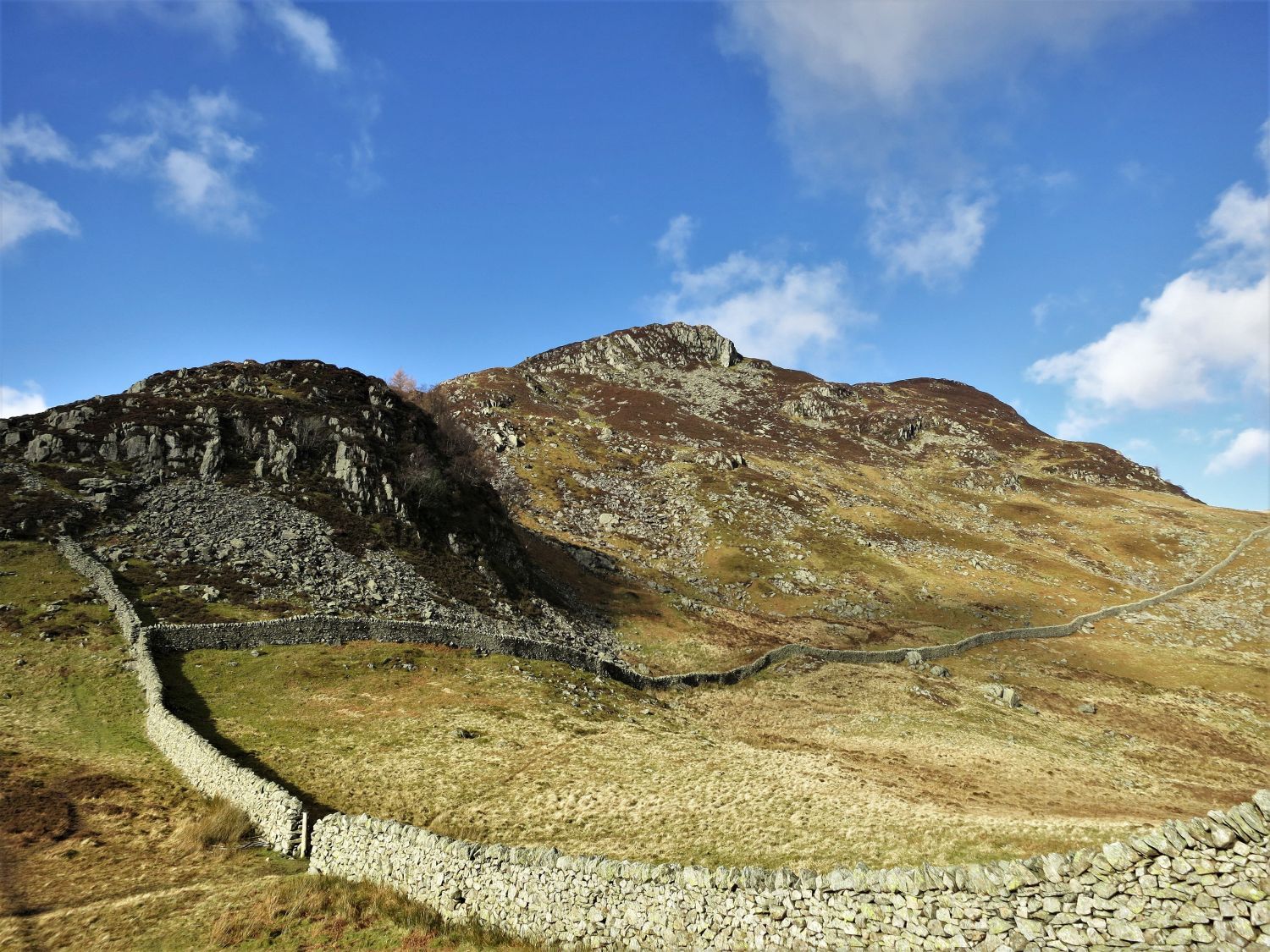 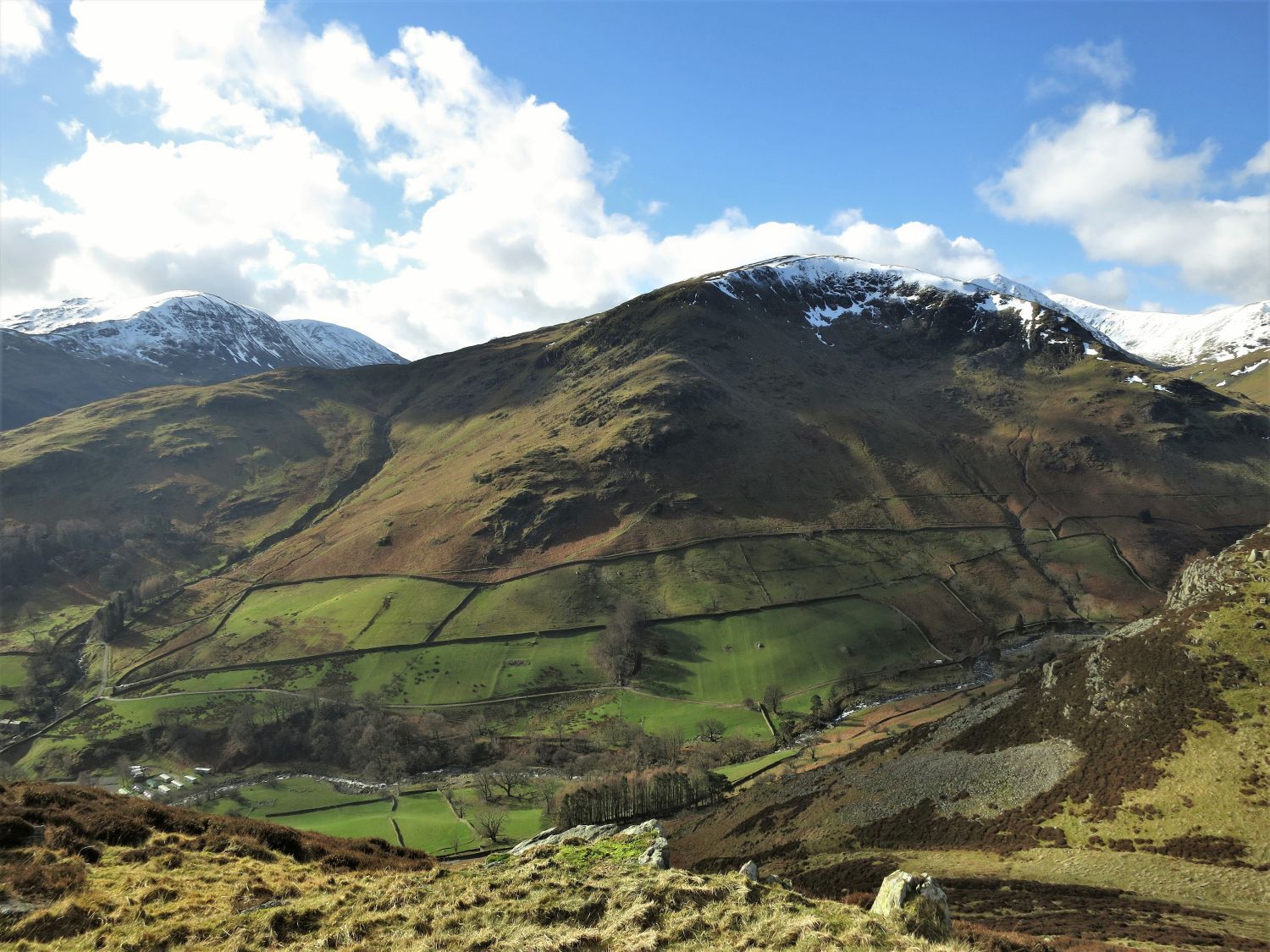 The groove ascending on the left is Mires Beck, which is our destination. 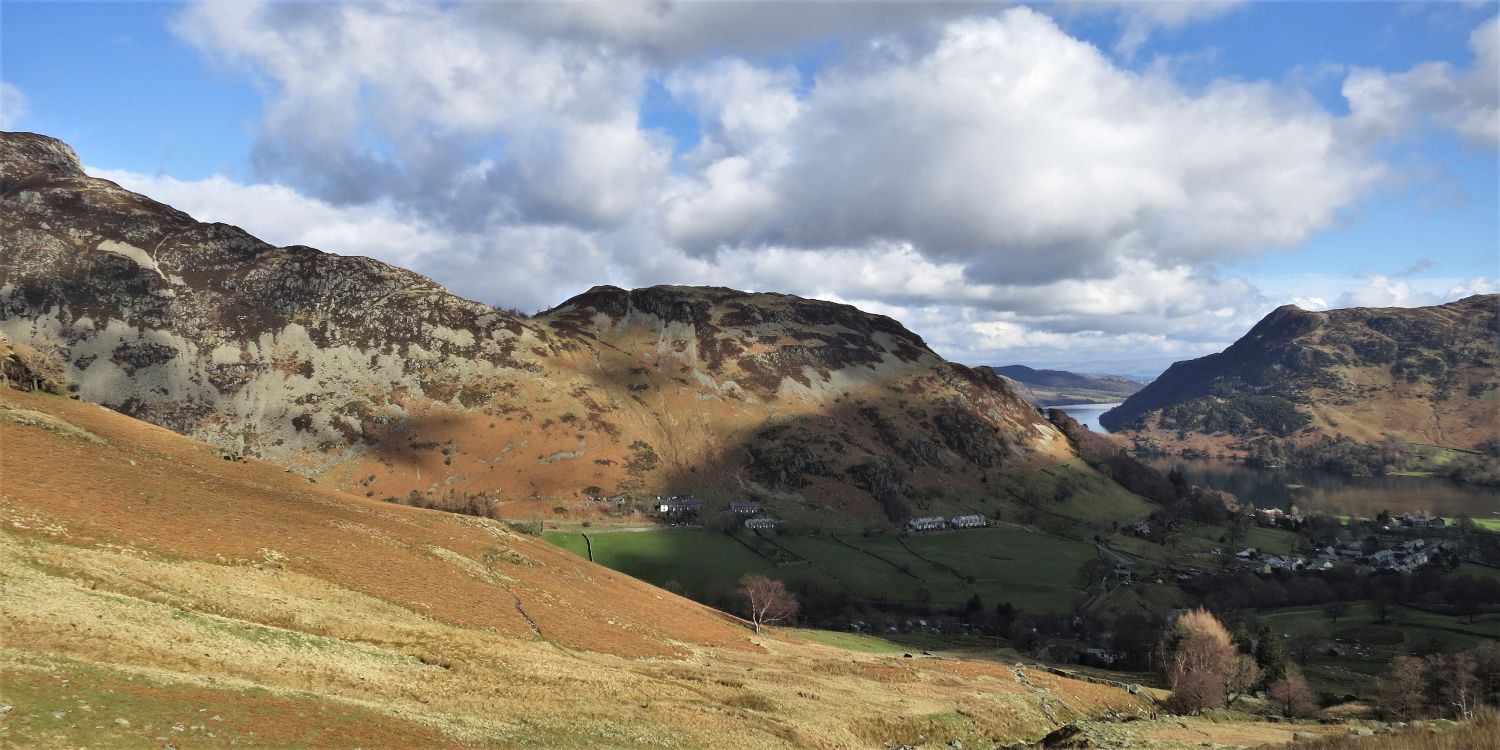 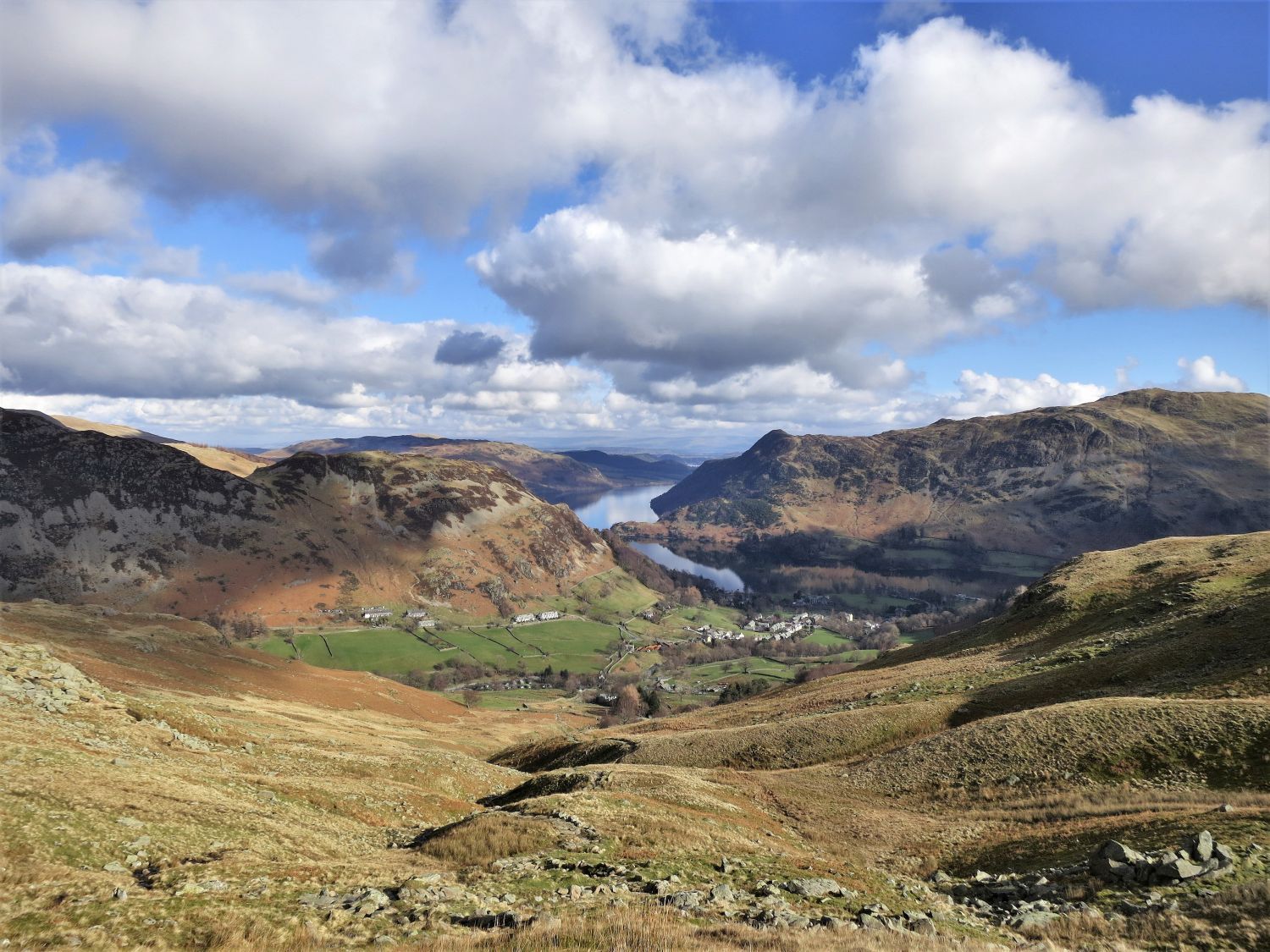 Ullswater and Glenridding from Mires Beck

It’s always a pleasure to look back towards Glenridding from this ascent, no matter what time of year it is.

Birkhouse Moor via Mires Beck is a long ascent, it never seems to end and feels like you are climbing a bigger mountain. 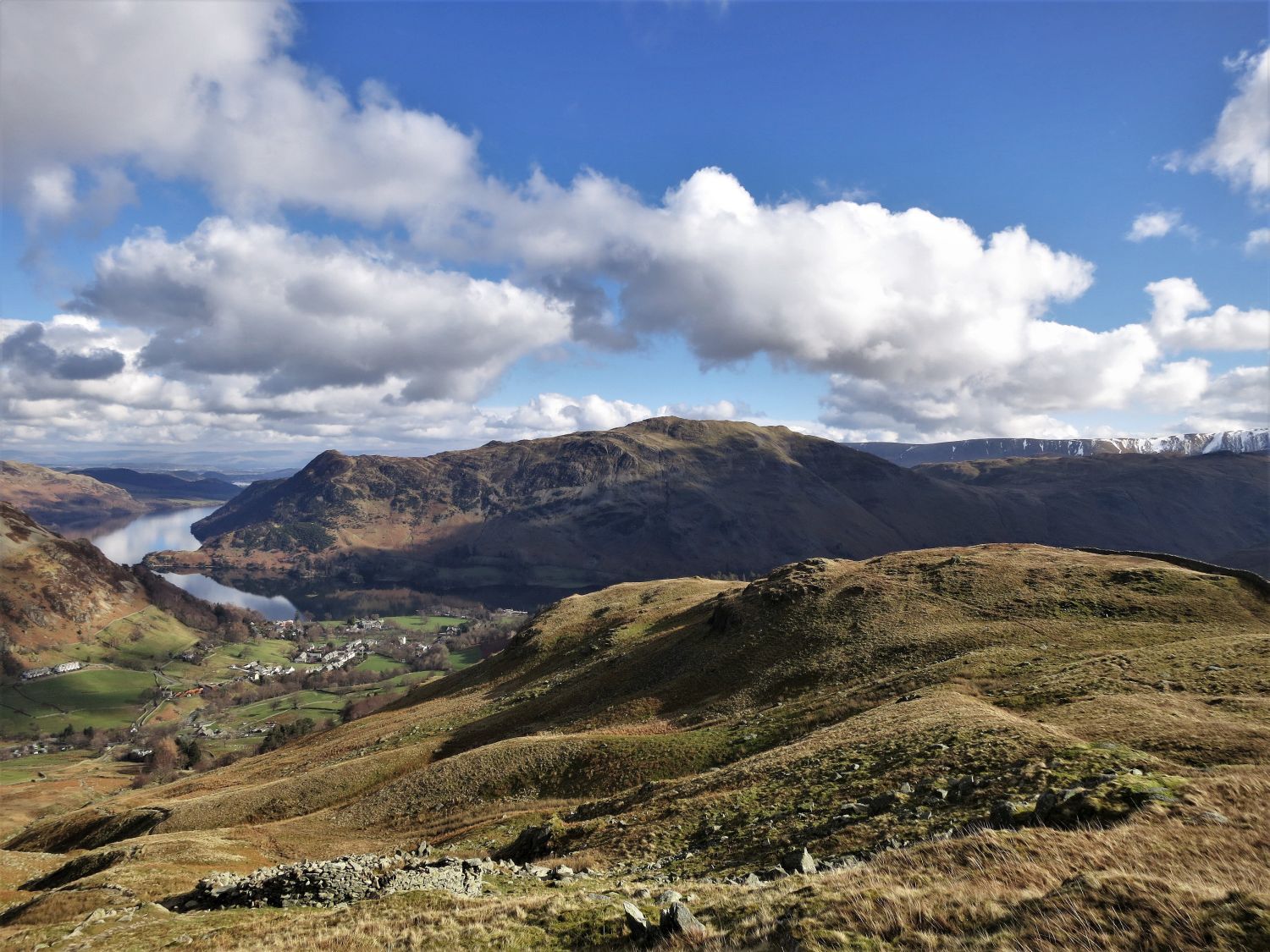 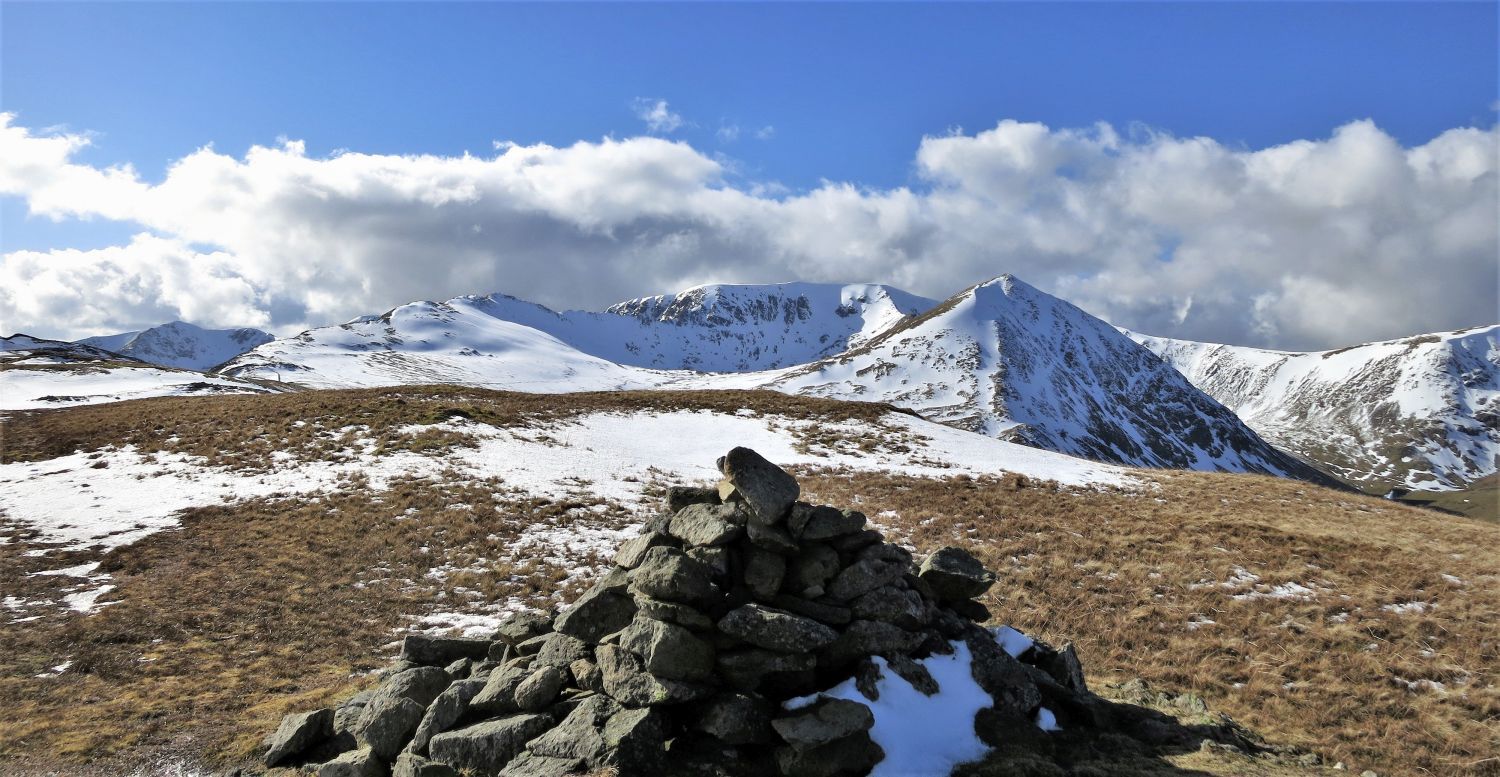 The Helvellyn Range from the summit of Birkhouse Moor

Just like Bessyboot on Rosthwaite Fell and the north-top on Seathwaite Fell, what is generally known as the summit is not always the highest point, especially if the fell is part of a continuing ridge to a parent fell. Personally, Birkhouse Moor comes into that category. The cairn at 2318′ will always be the summit to me, after all, it is the summit of the “moor”, and the highest point at 2356′ being the summit of a ridge that continues to Helvellyn via Striding Edge. Alfred Wainwright himself seemed hesitant, maybe he thought the same but wouldn’t commit to either? Whatever your feelings on this, it’s nice to have the freedom of personal choice. 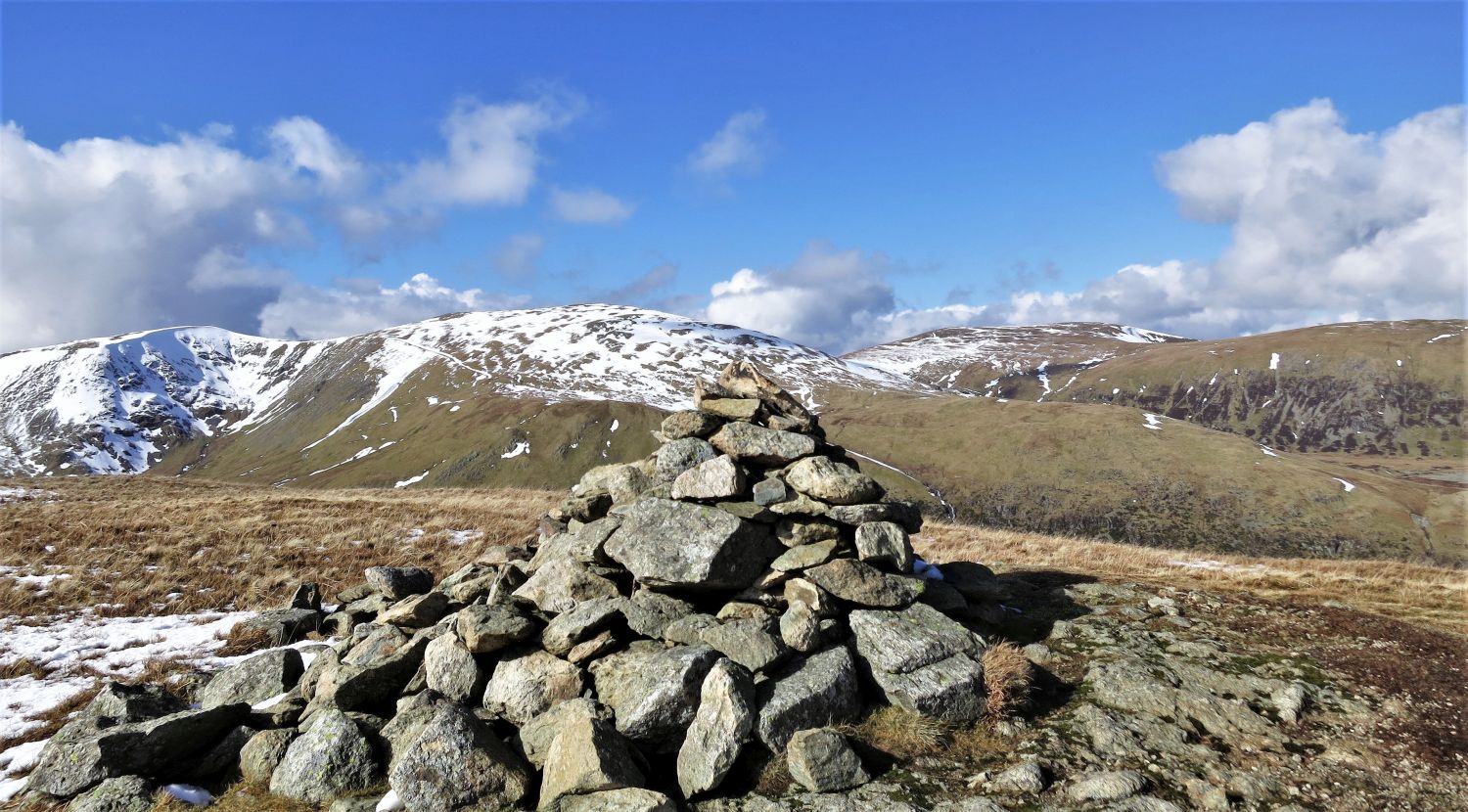 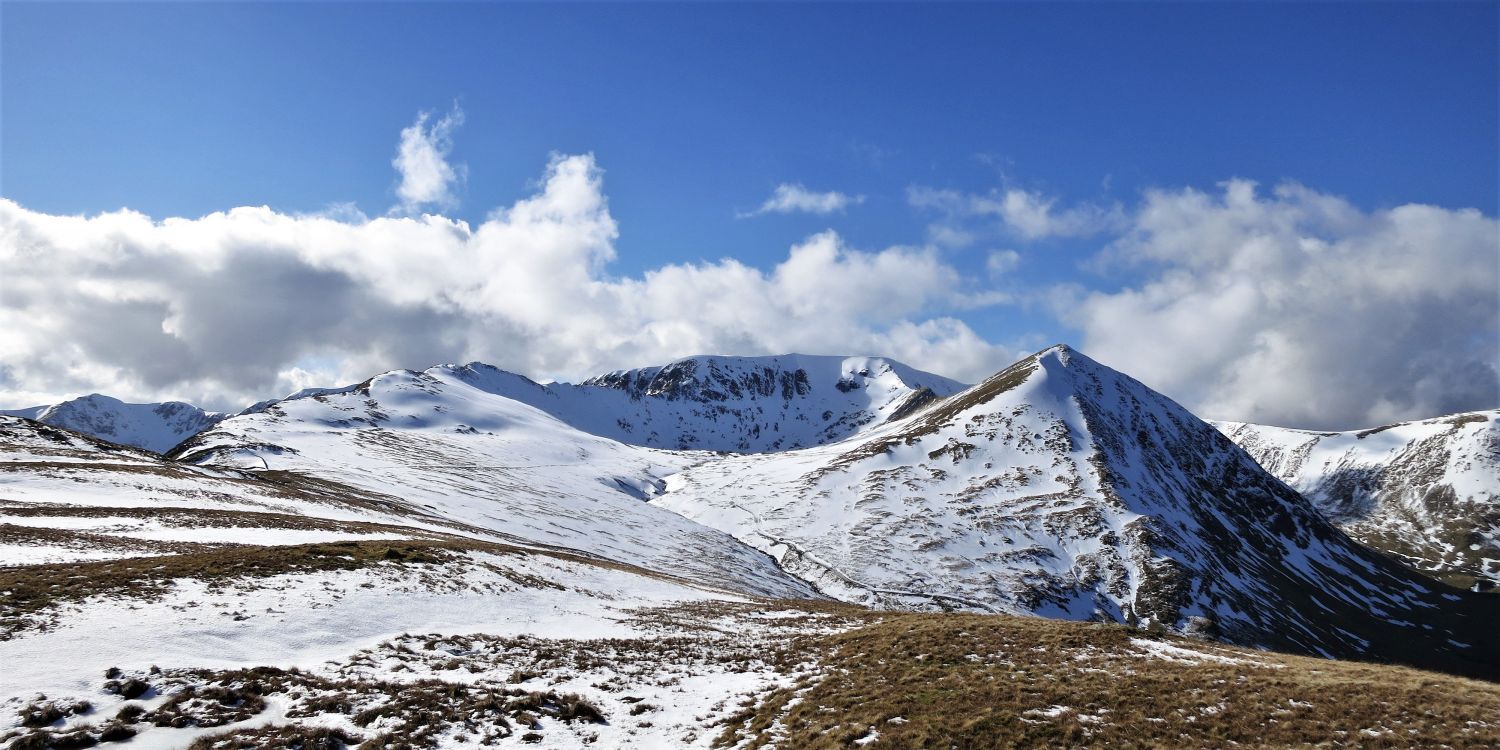 We are finally amongst the big tops, and Helvellyn and its ridges are so inviting from here.

Looking back at Birkhouse Moor 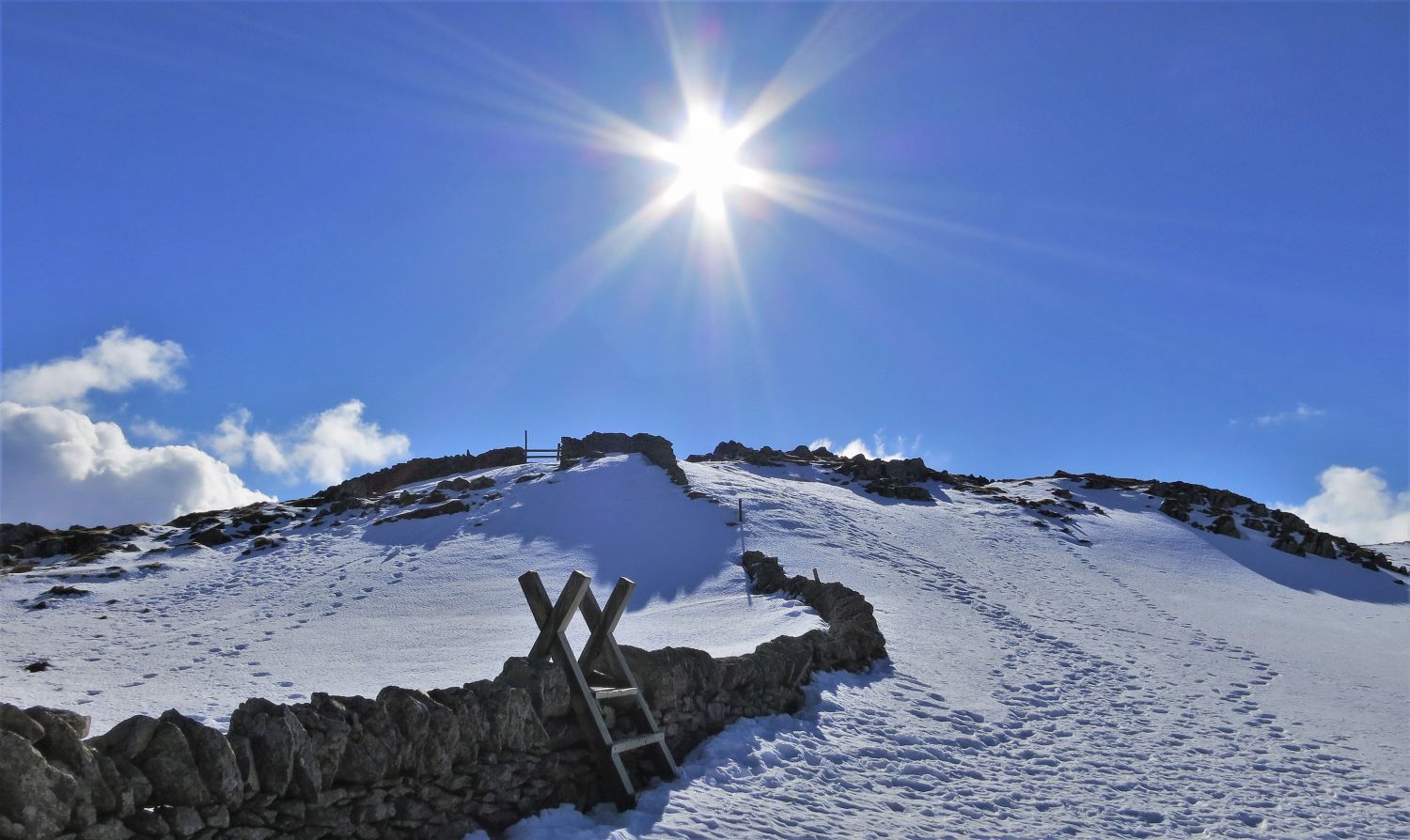 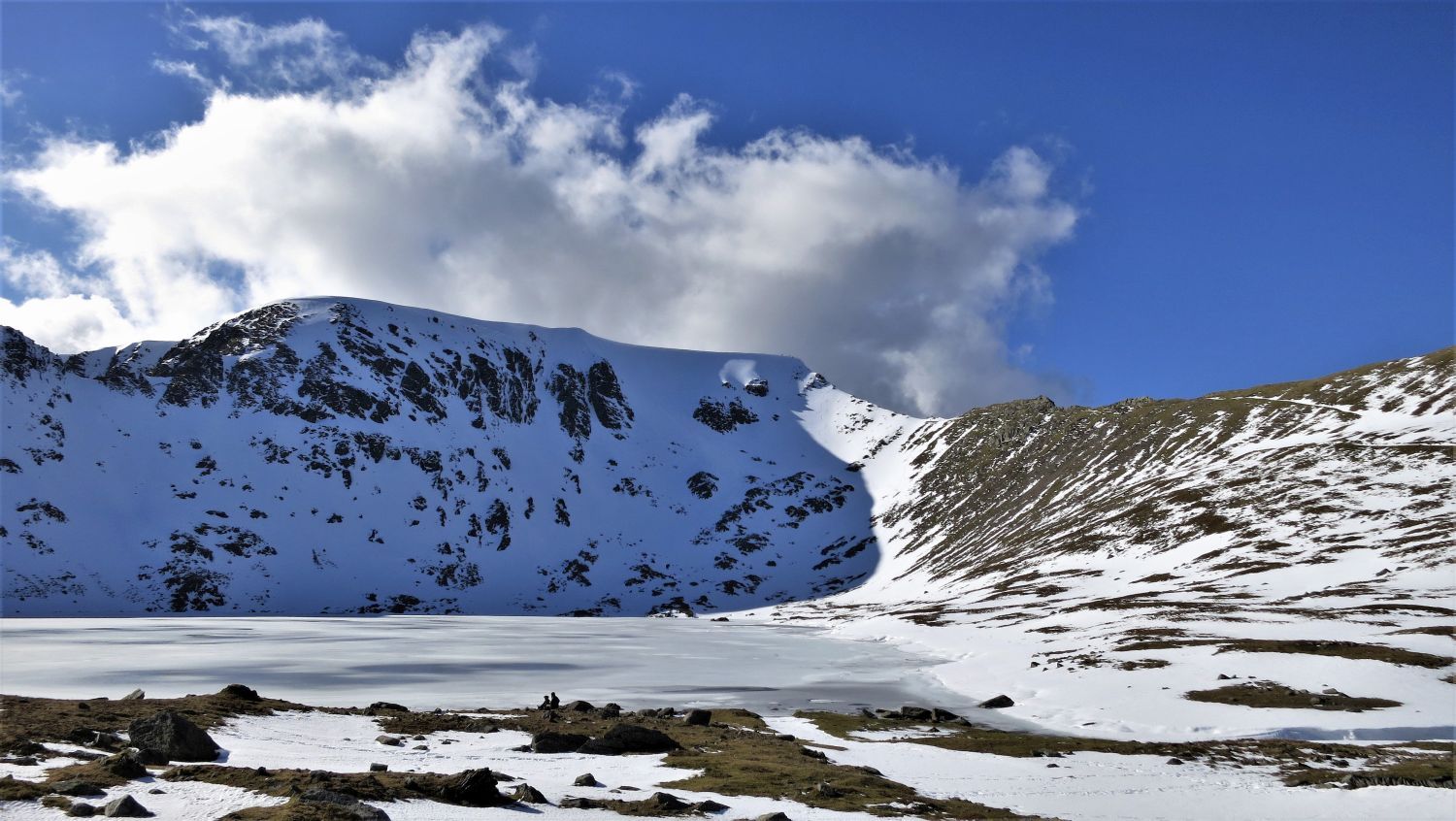 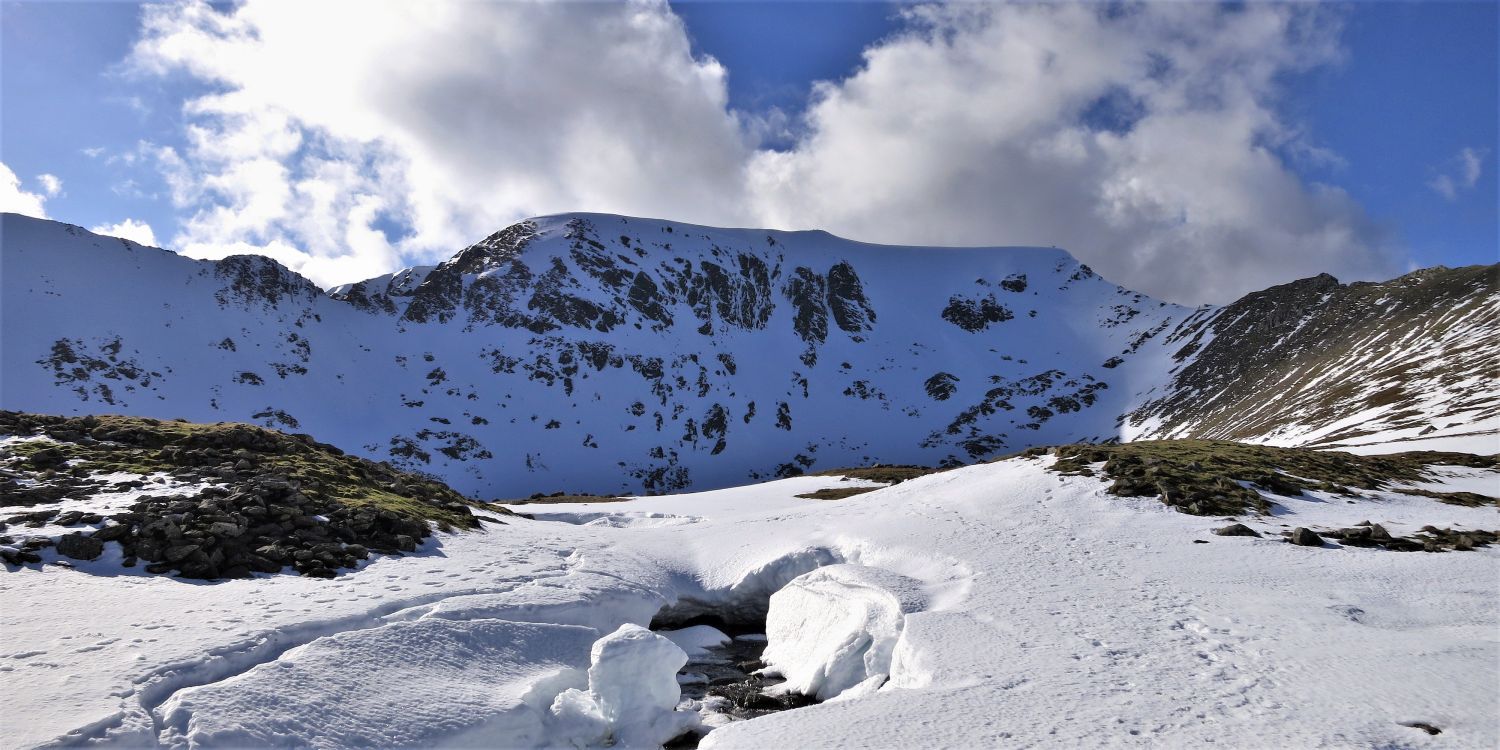 Time to take the microspikes off and put the crampons on me thinks! 🙂 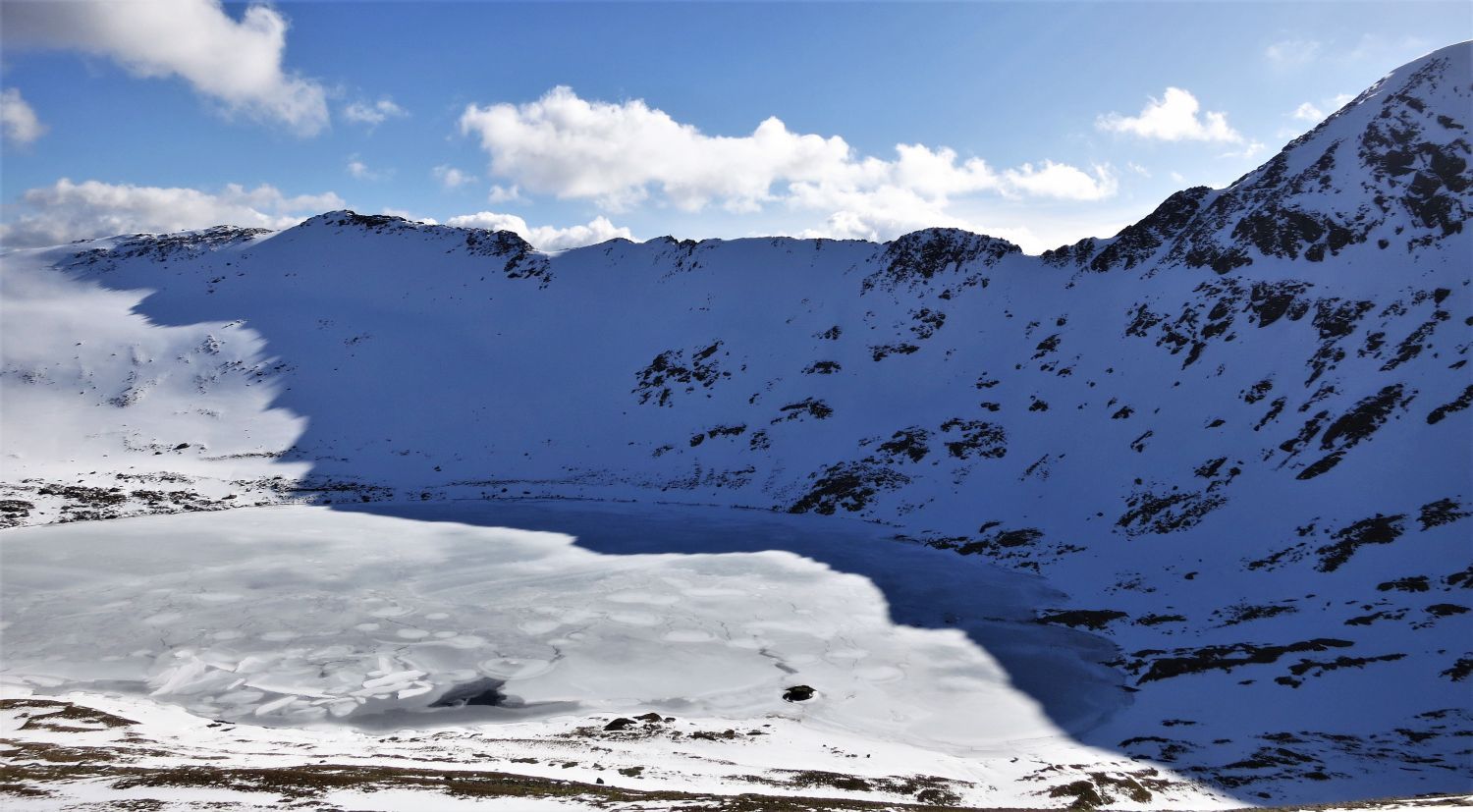 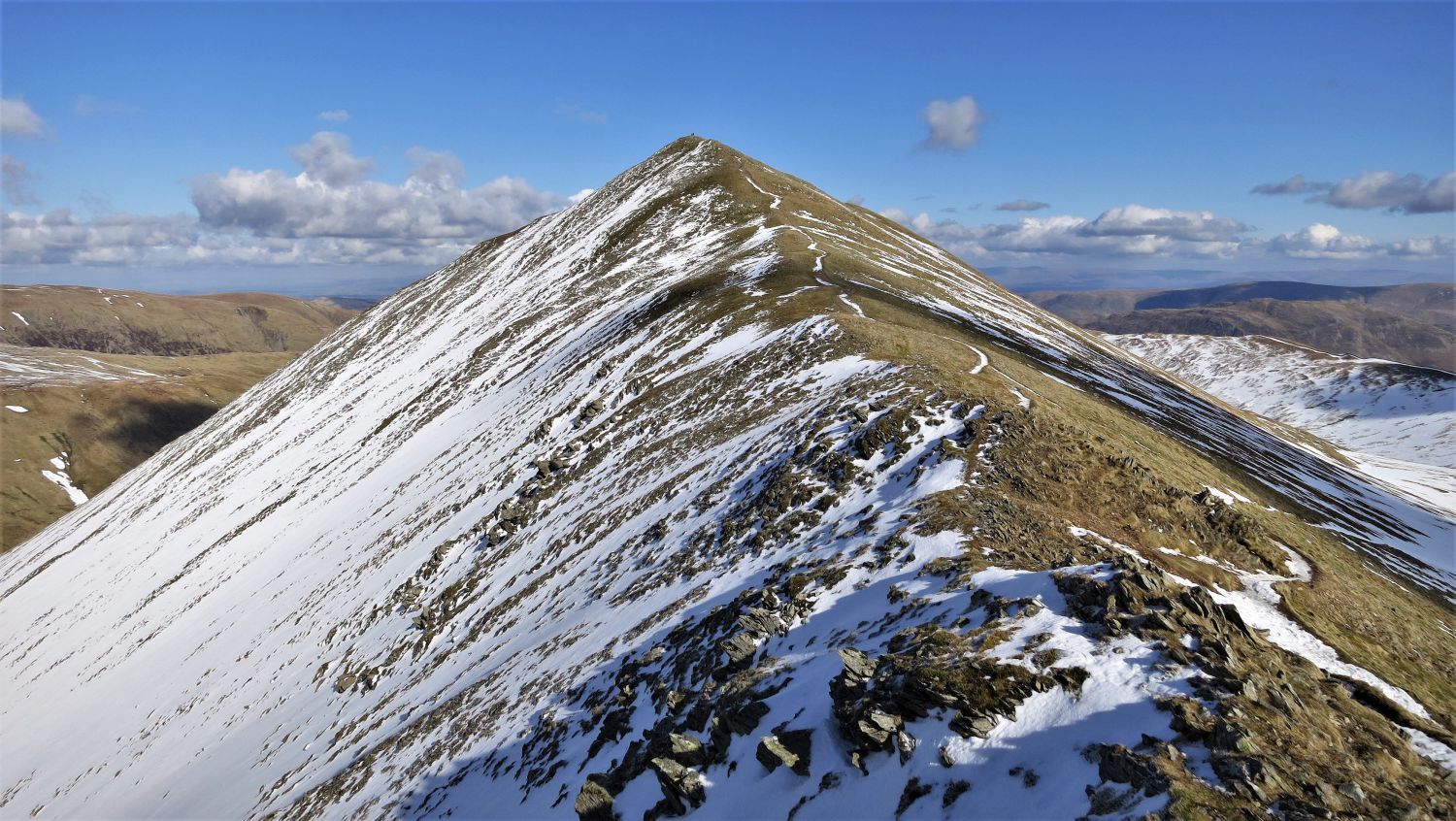 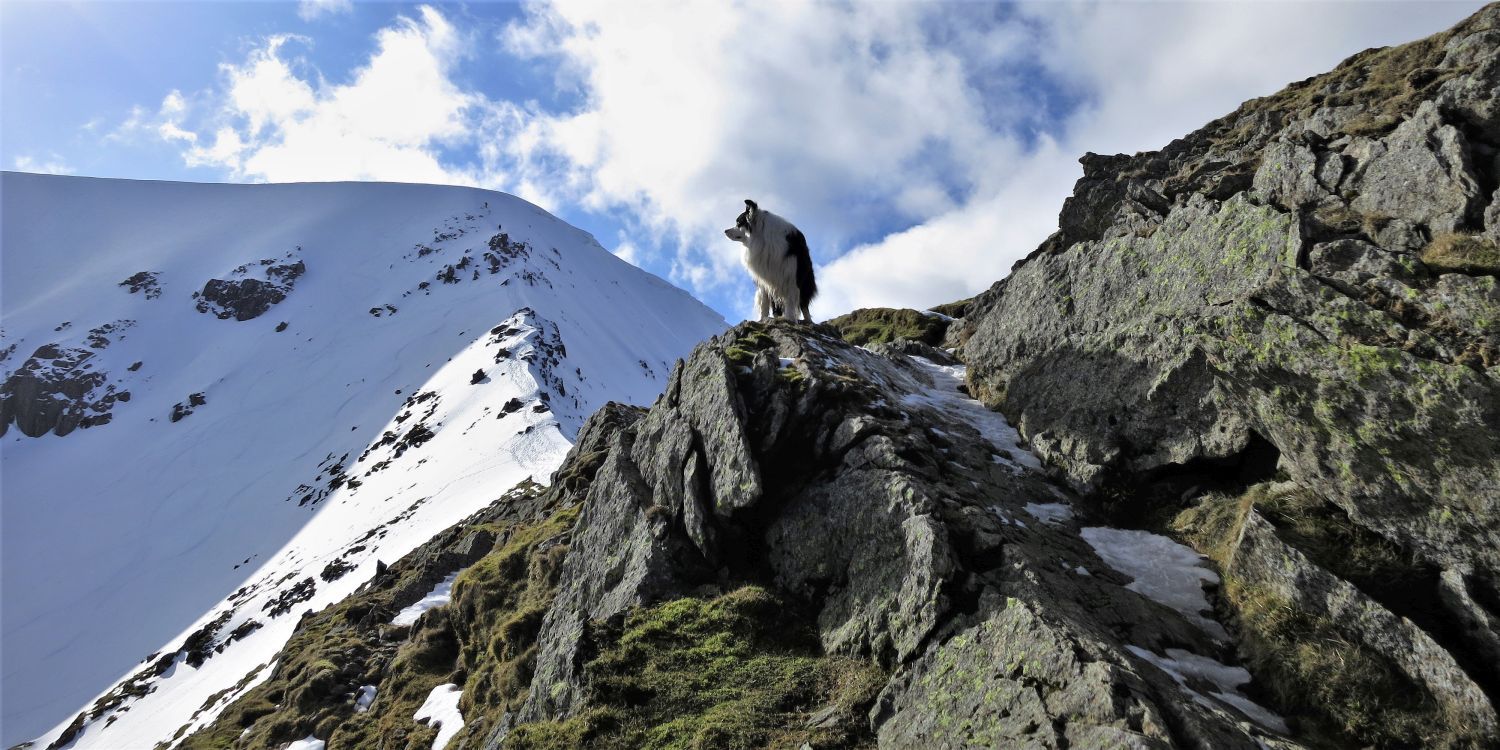 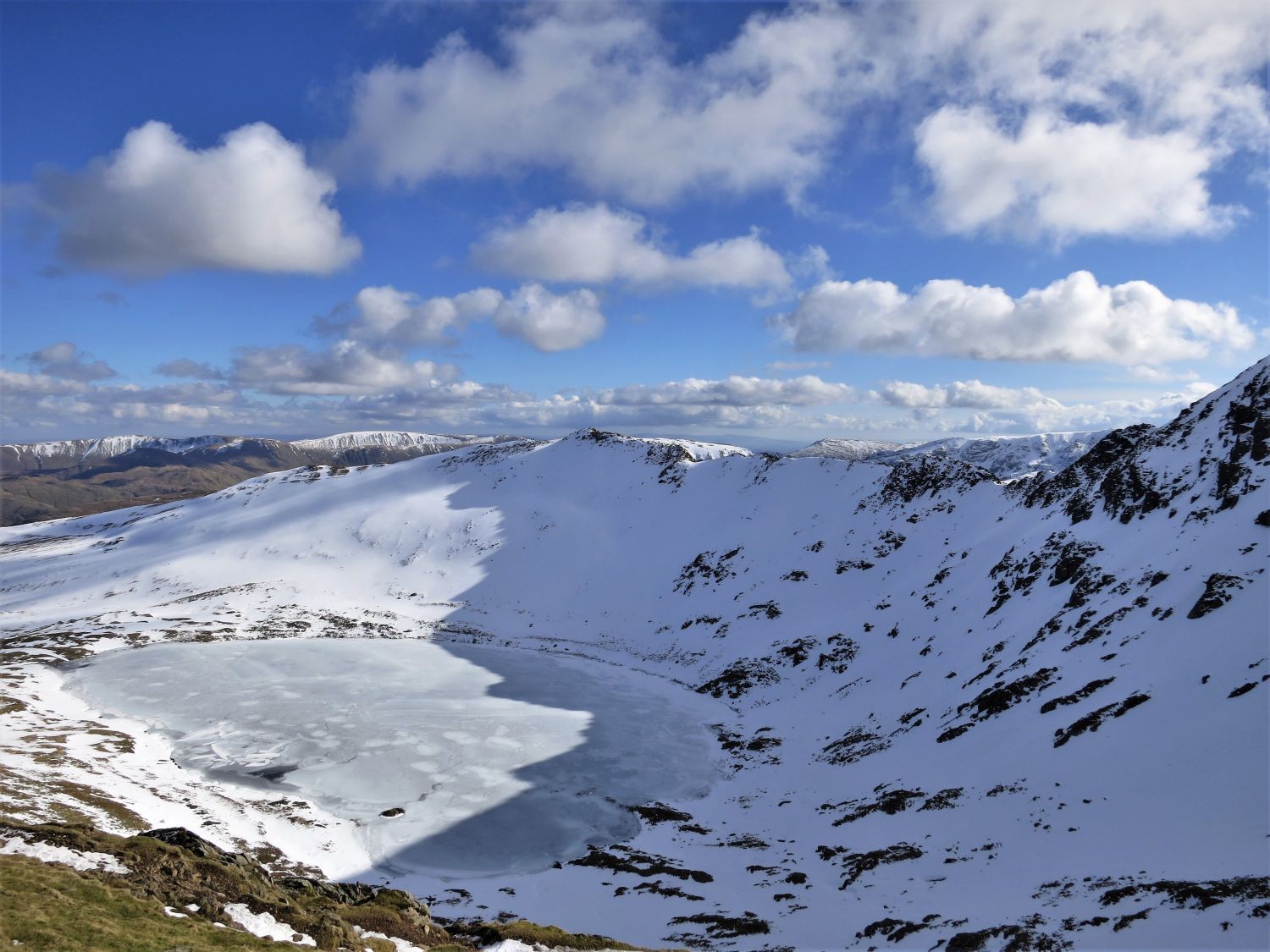 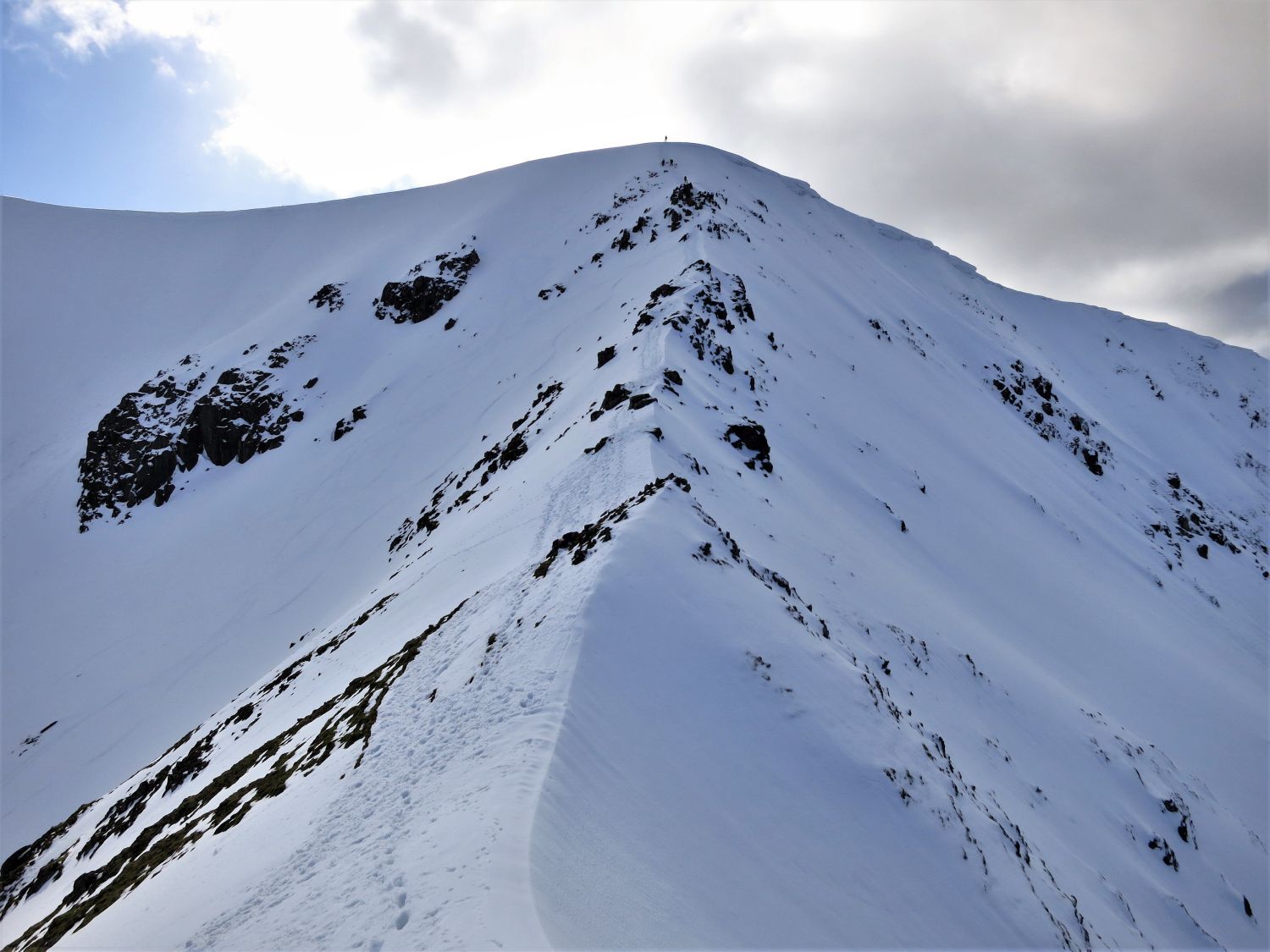 This is it, and on this narrow edge Frankie will have to be on the lead. Many dogs have slipped off this section in recent years due to the build up of snow, so please take care. The very steep last section, where you can see people, I’ll let Frankie off the lead and let him attack the climb on his own; for yourself, an ice axe is essential at that point. 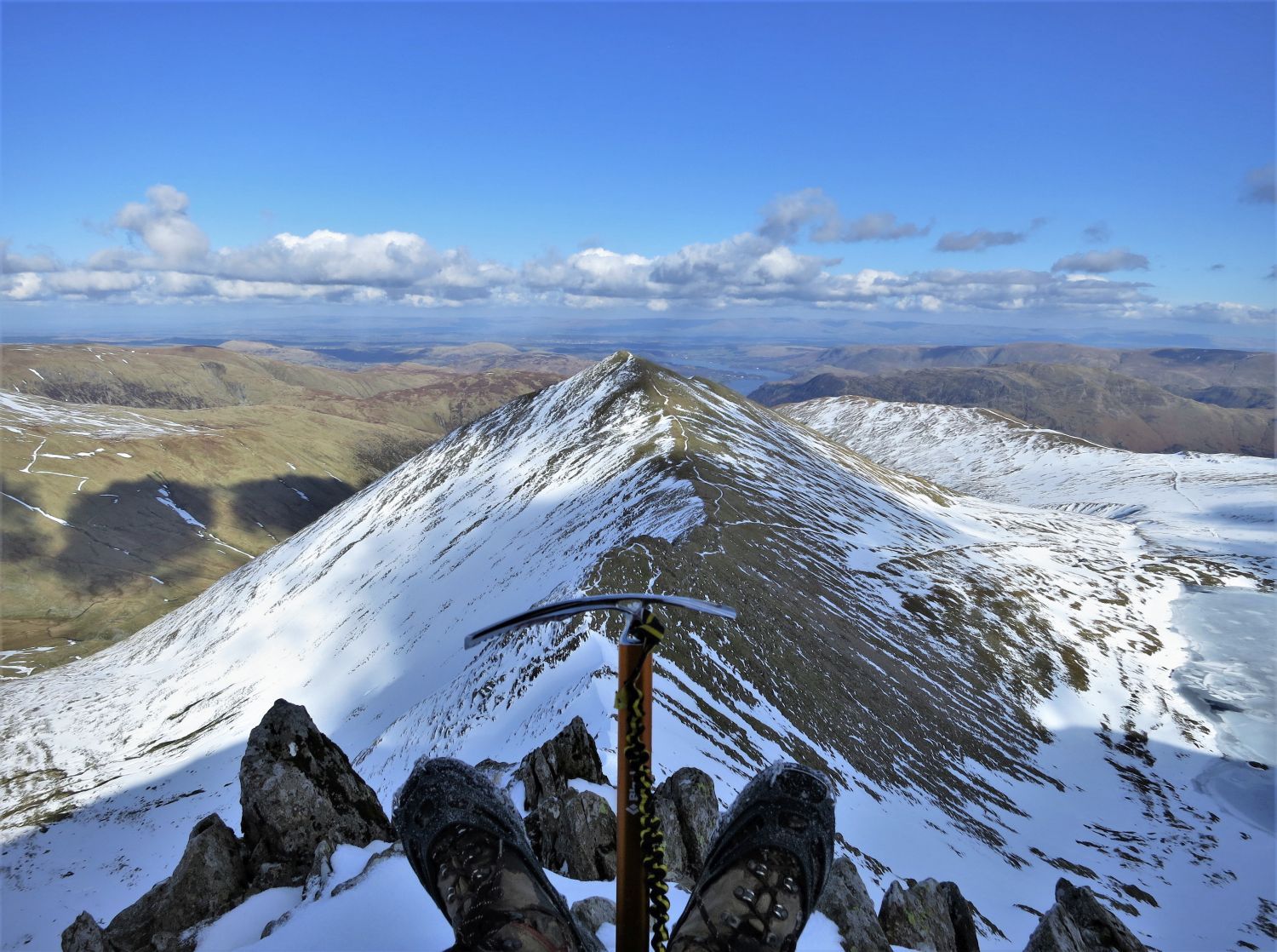 Because of a rocky section midpoint, I decided to put the spikes back on temporarily. 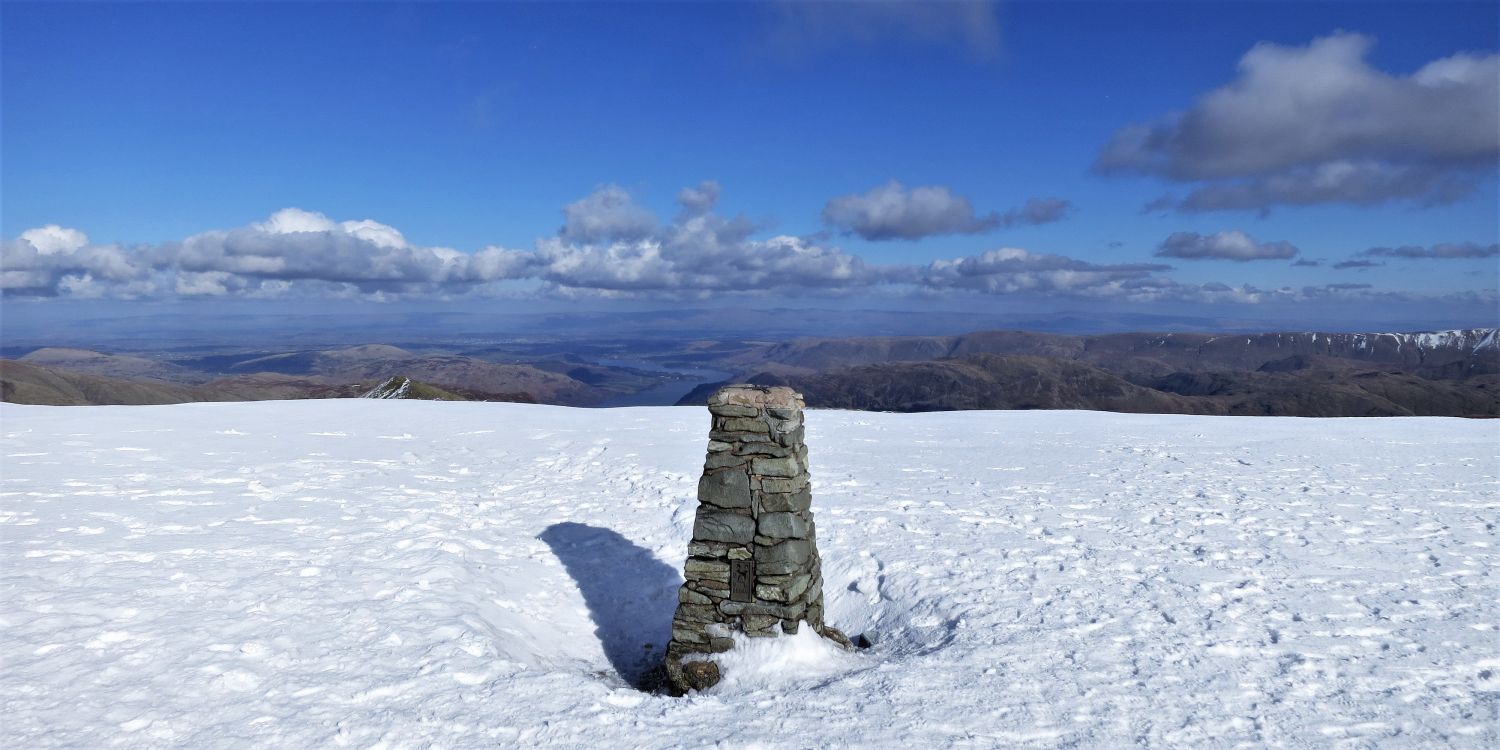 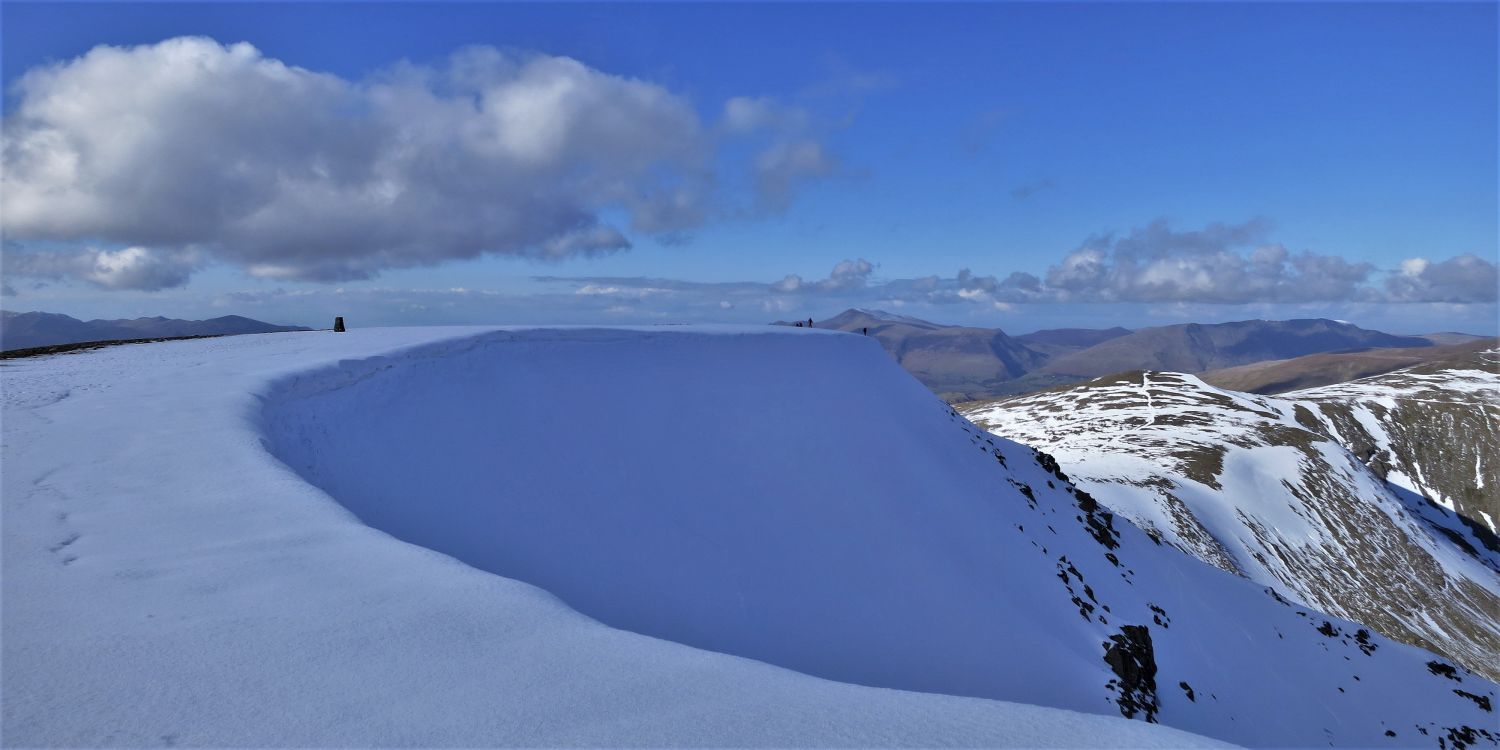 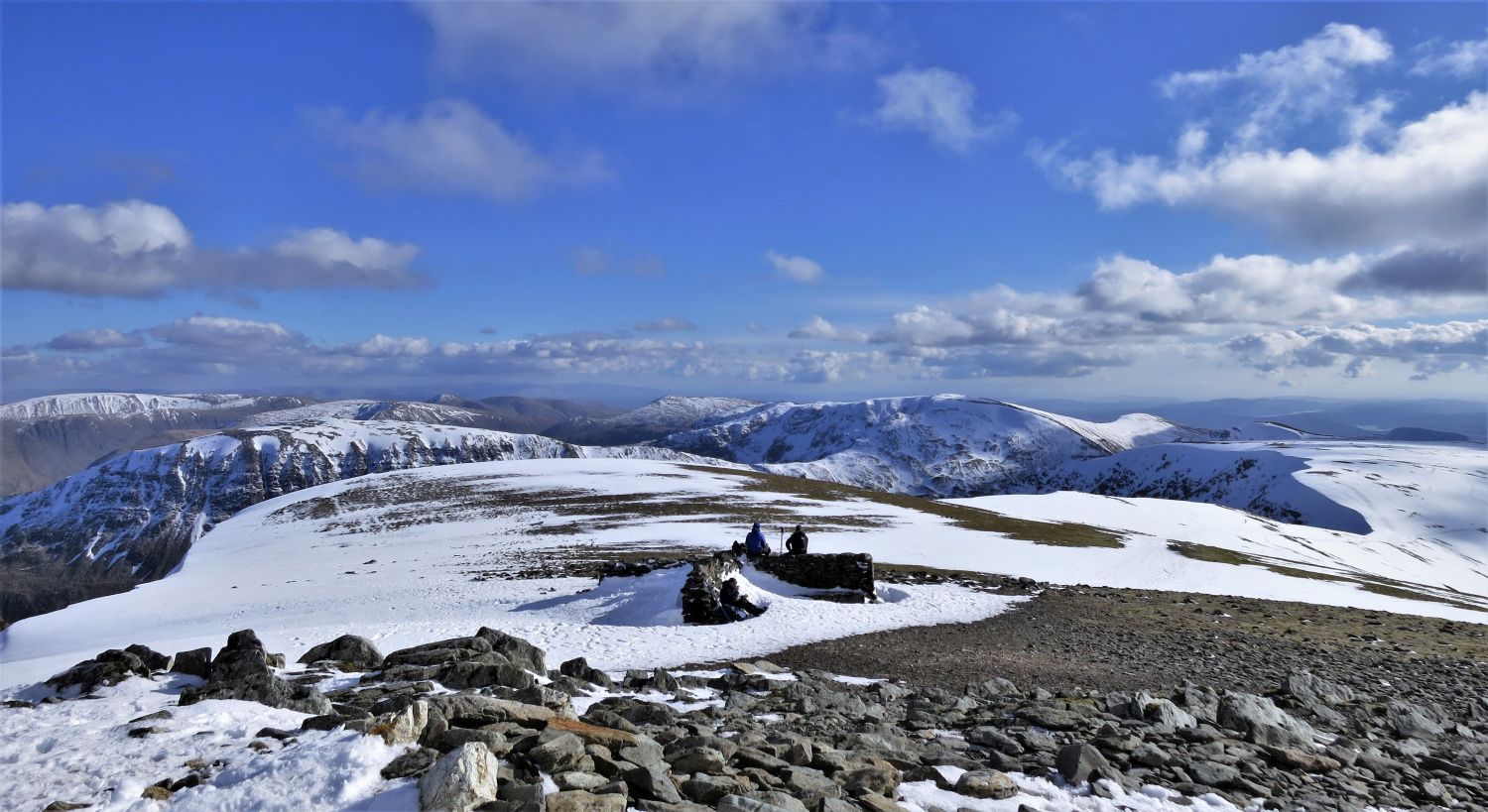 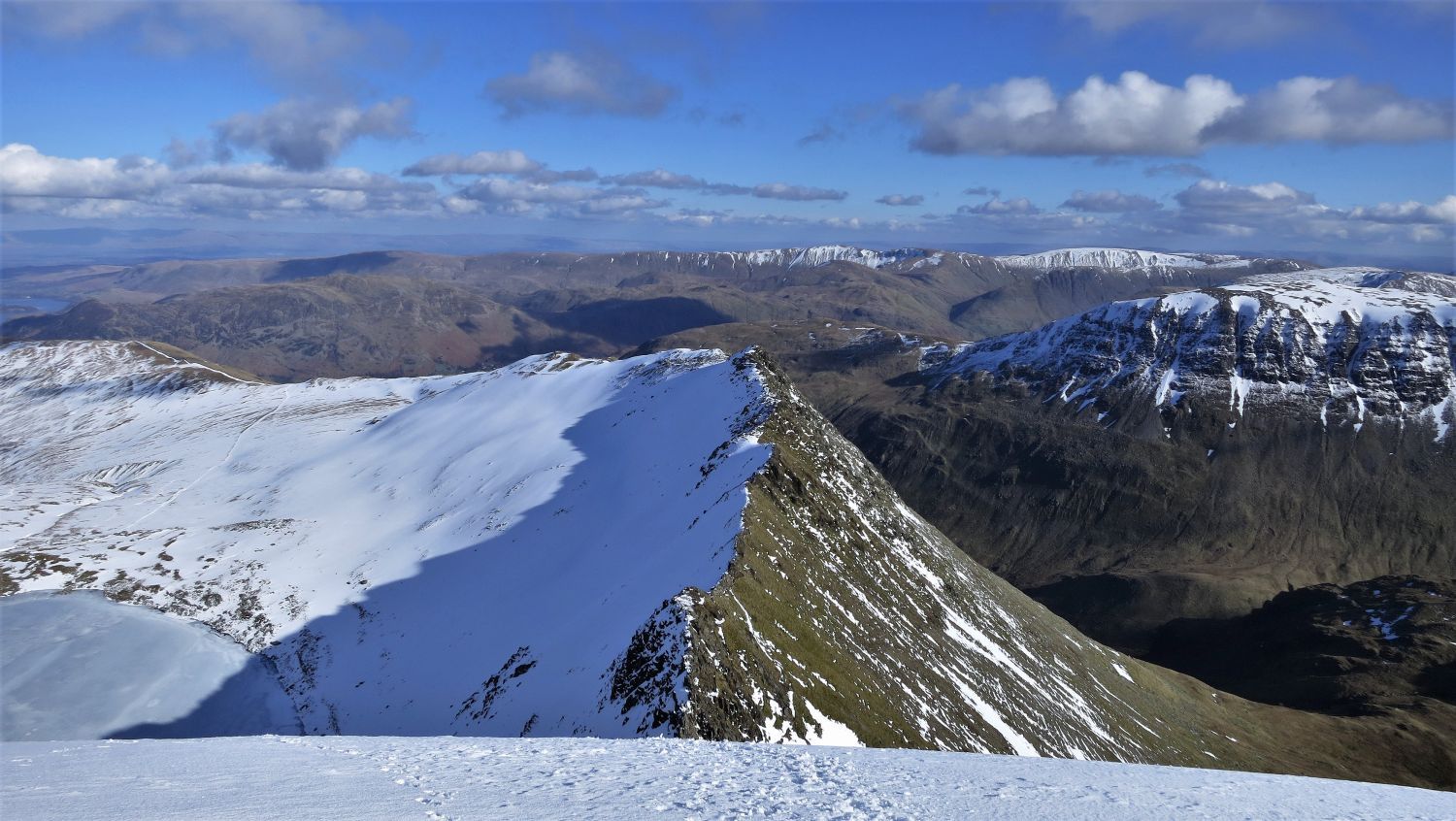 Looking down towards Striding Edge

“Thousands of people cross the flat top of Nethermost Pike every year, and thousands more toil up its western slope. Yet their diaries record “climbed Helvellyn today”. For Helvellyn is the great magnet that draws the crowds to Nethermost Pike: the latter is climbed incidentally, almost unknowingly, only because it is an obstacle in the route to its bigger neighbour.” Nethermost Pike 2
AW

Frankie on the summit of Nethermost Pike 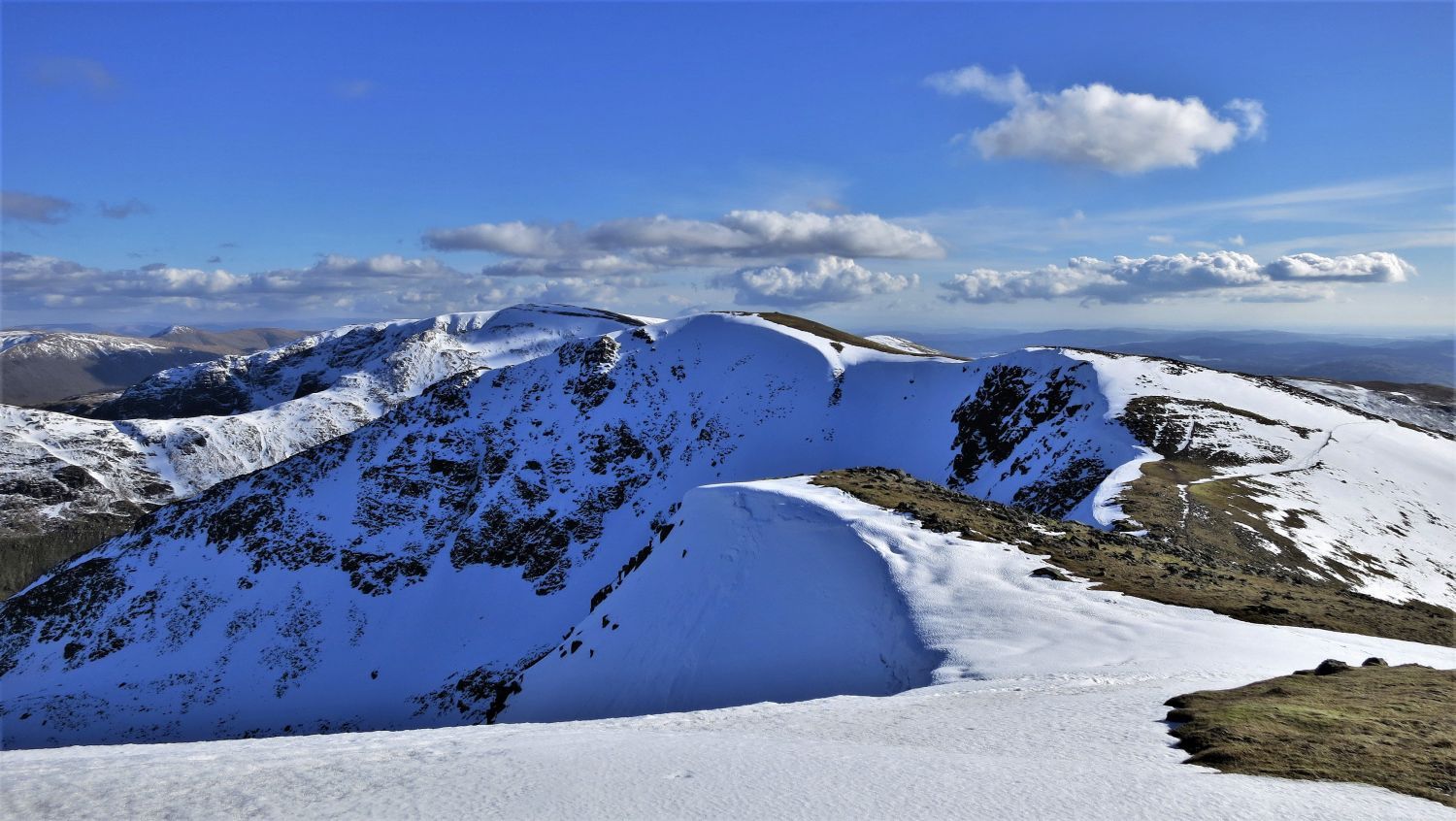 “An excellent path links Dollywaggon Pike and Nethermost Pike, skirting their actual summits to the west. A more interesting route (no path) lies along the edge of the crags overlooking Ruthwaite Cove.” Dollywaggon Pike 12
AW 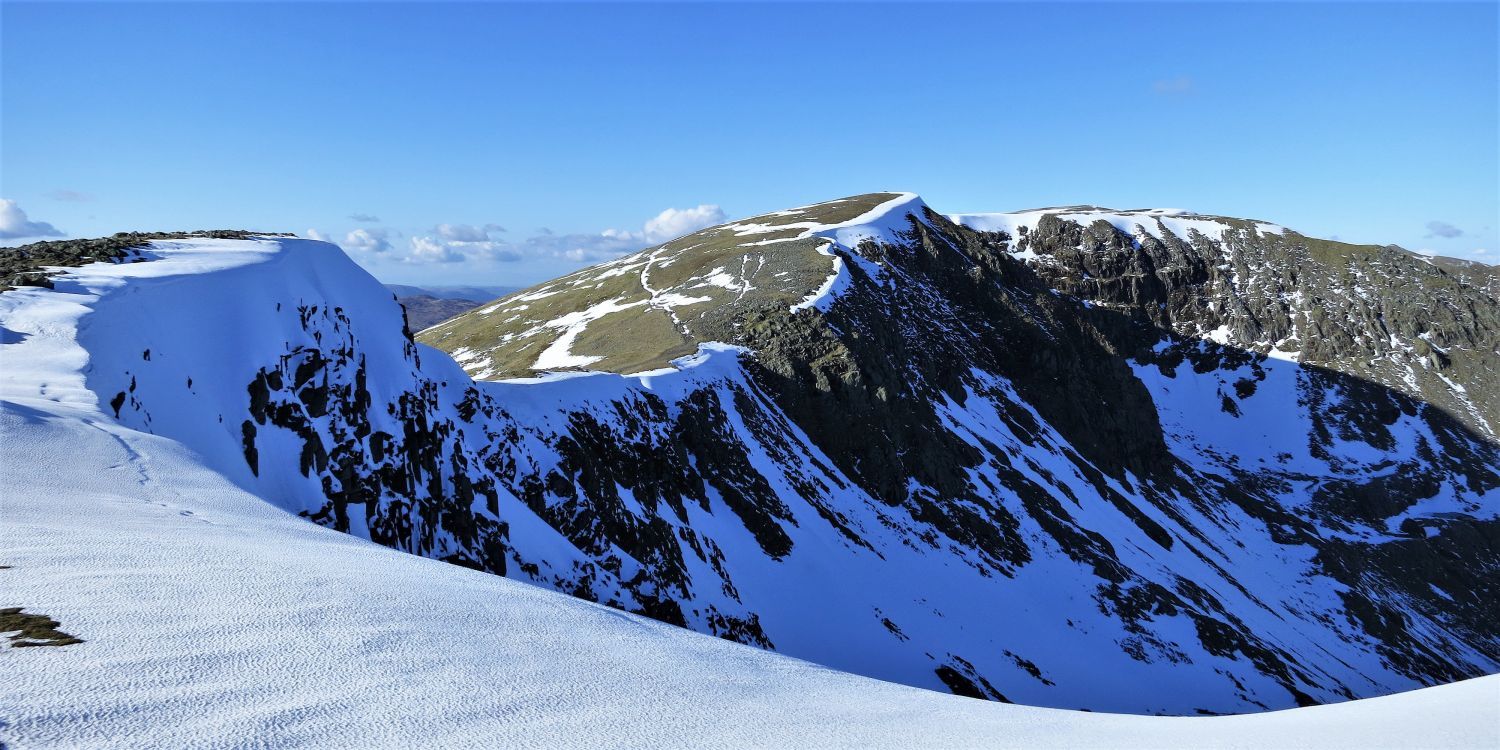 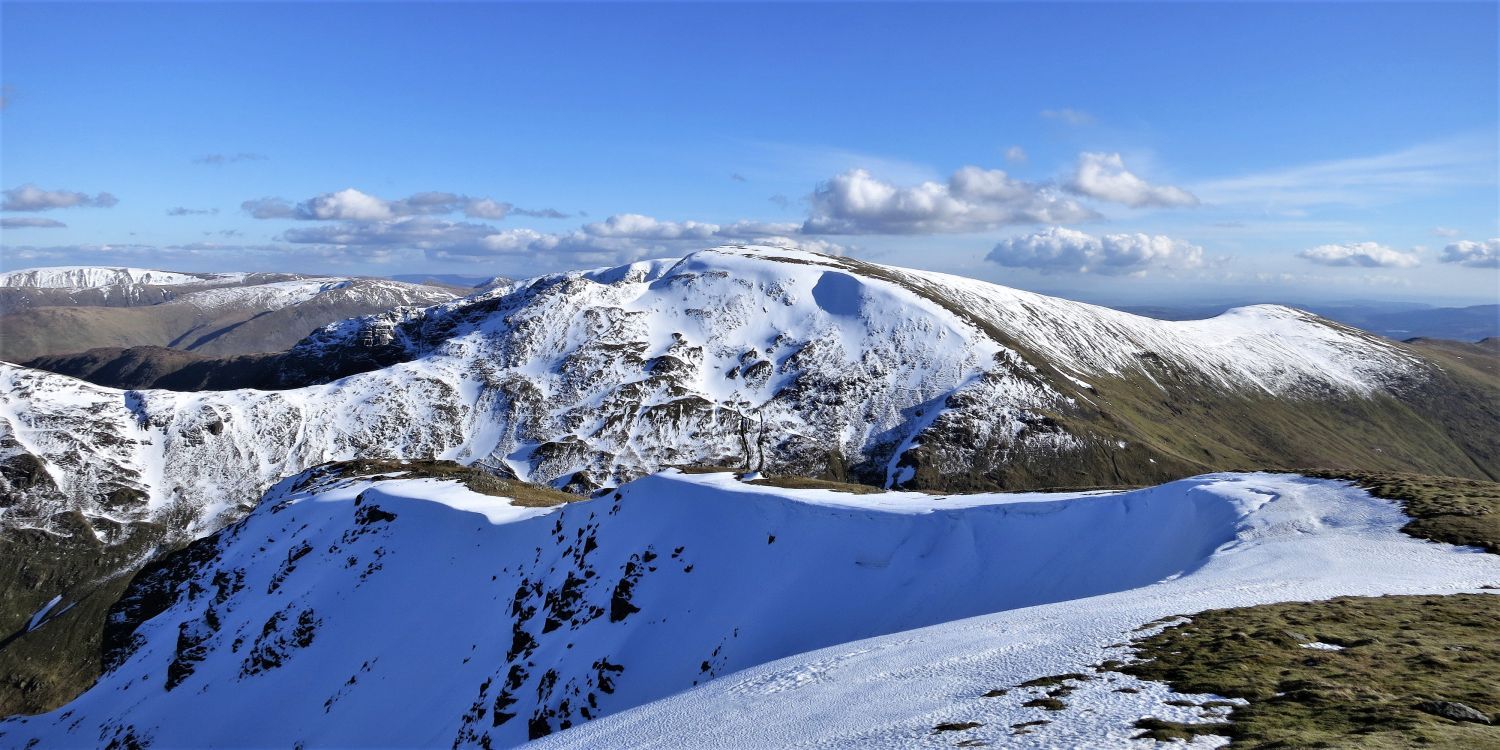 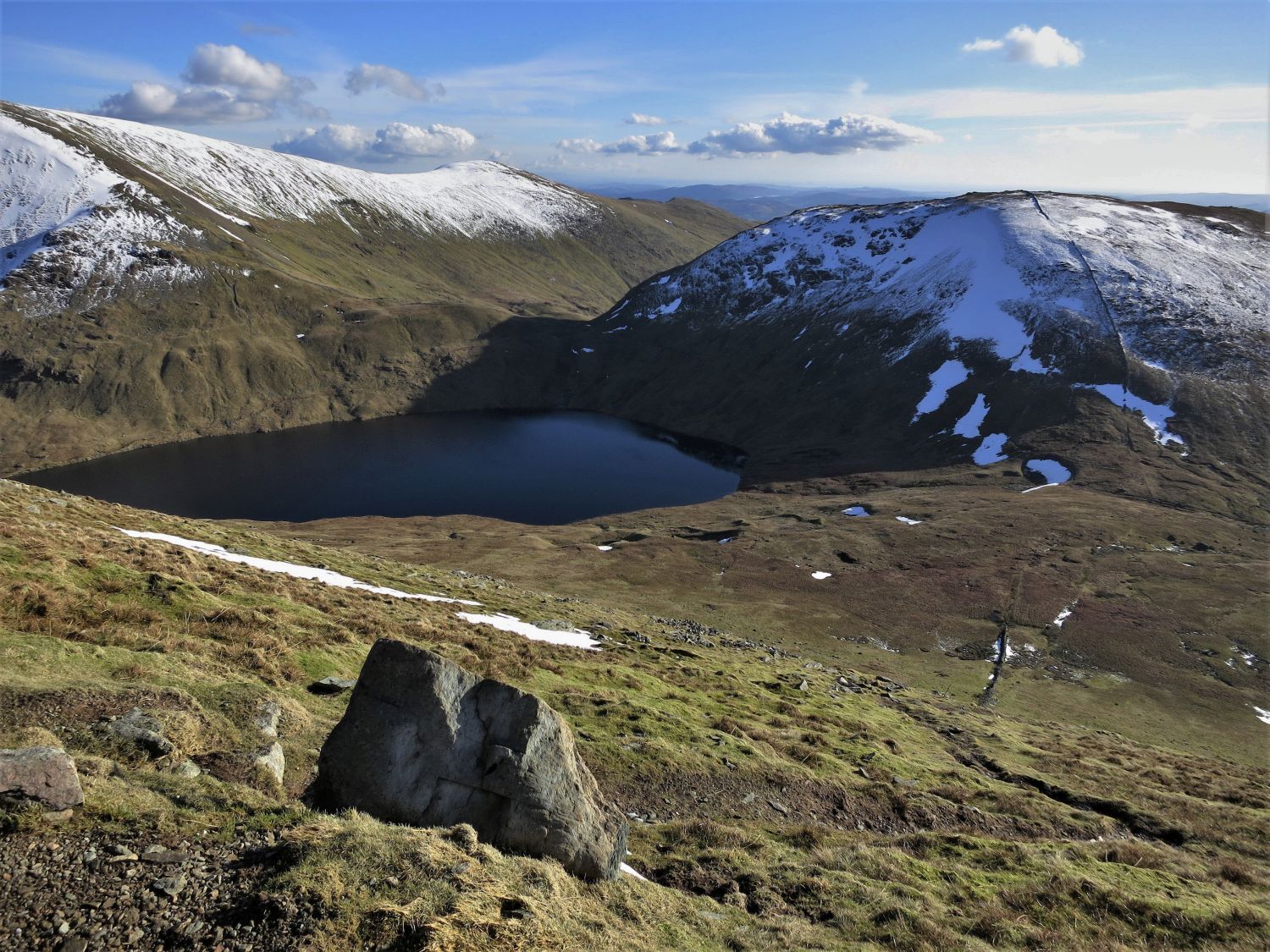 Seat Sandal and Grisedale Tarn from the descent of Dollywaggon Pike

A big drop and a big climb from here, but well worth the effort.
“Seat Sandal is the next fell to the south, but the direct route to it can hardly be called a ridge. There is no path, but the way is indicated by broken fences and walls” Dollywaggon Pike 12
AW 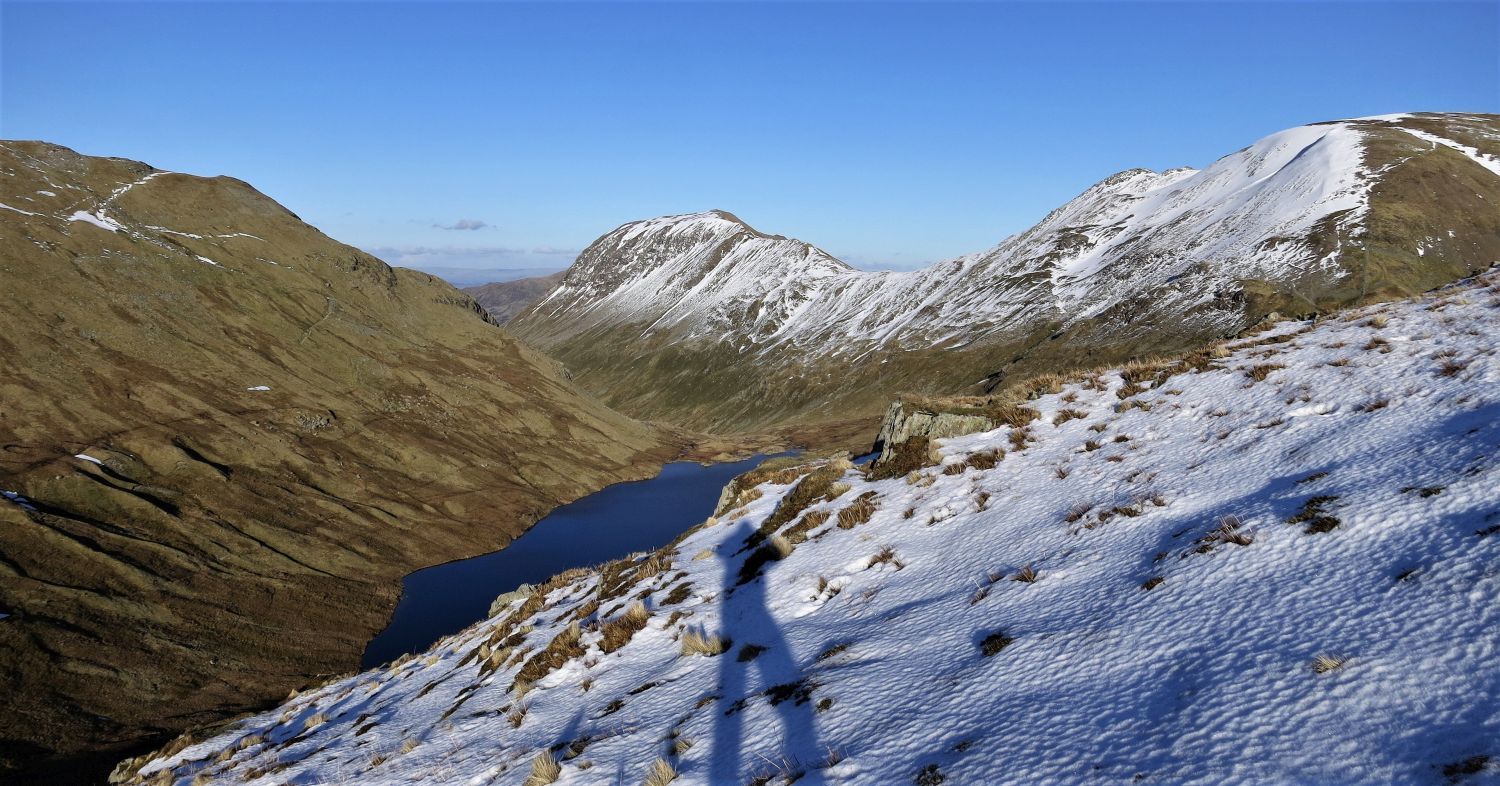 St Sunday Crag from the ascent of Seat Sandal 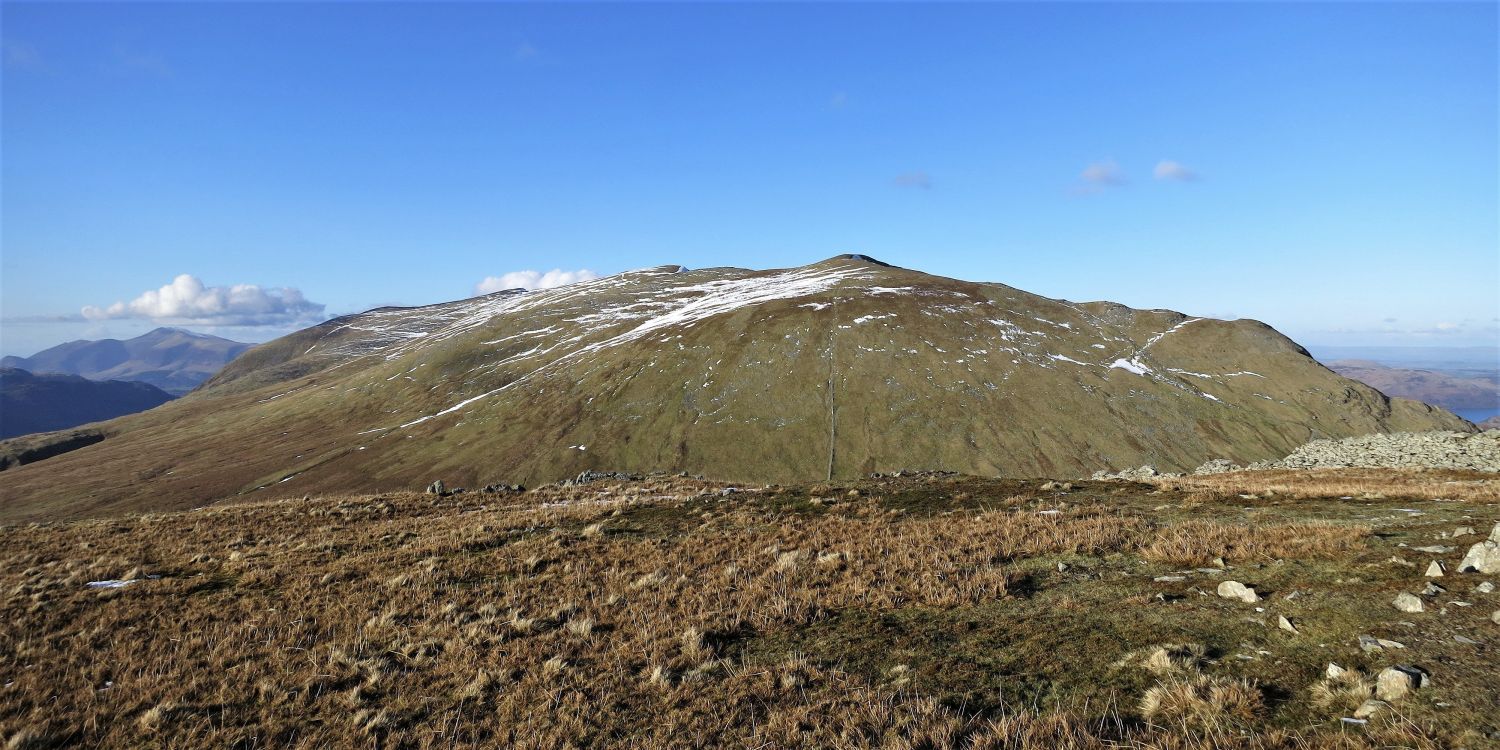 Looking back at Dollywaggon Pike from Seat Sandal

Descent via the south ridge to Grasmere

“The best way off the summit, in clear weather, is by the south ridge to Grasmere, the views being excellent and the gradient exactly right – this is one of the quickest descents in the district.” Seat Sandal 6
AW