Route 22 – The Deepdale Round 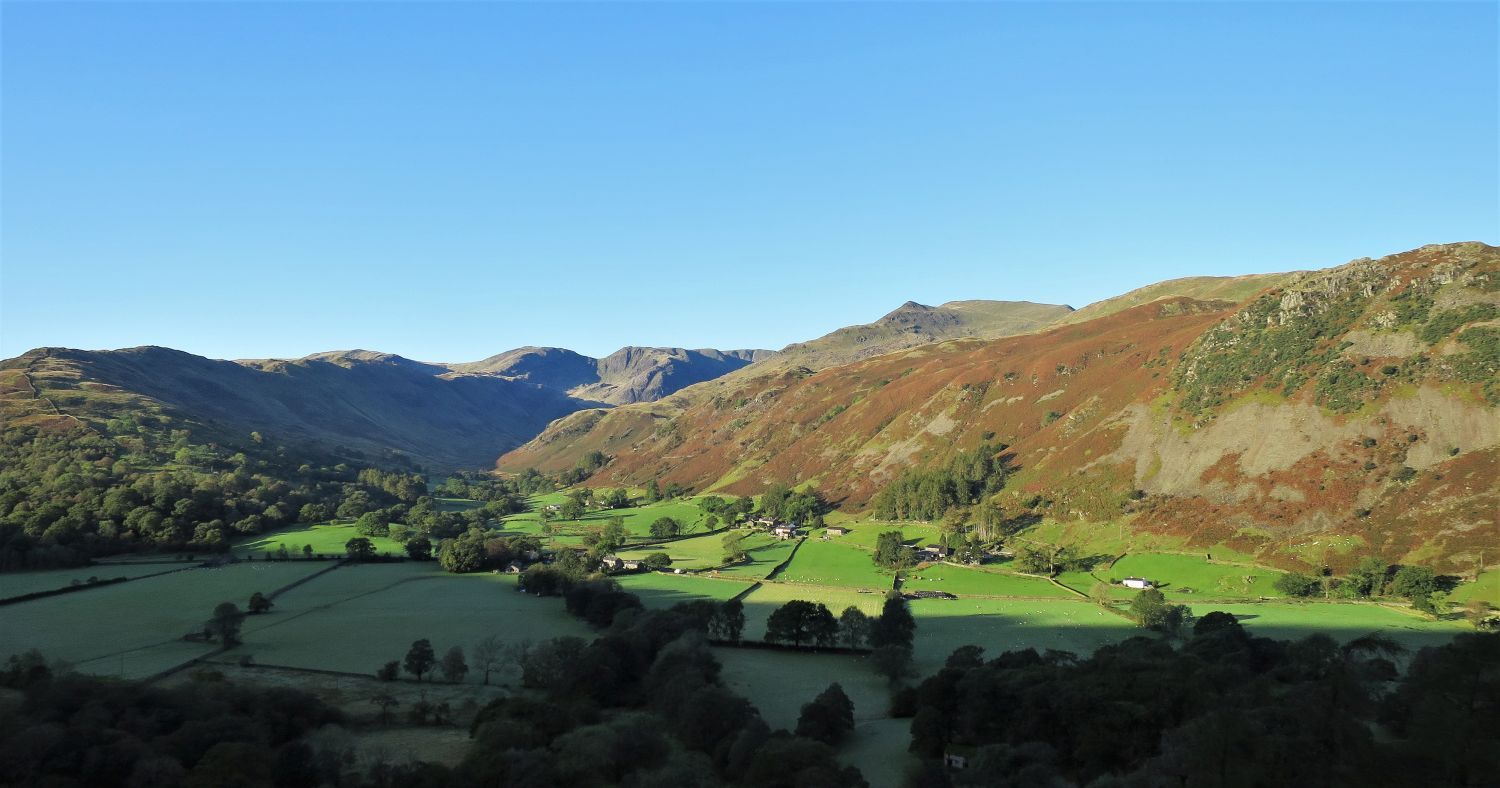 I don’t have a favourite ’round’ as such, basically because I still need to walk them all in all weather conditions, but the Deepdale Round certainly warrants to be in my top five at this point of my exploration of the Lakeland fells. Some parts of this route will not be fun in wet conditions, especially the long ridge of Hartsop above How and some of the rock sections, so a good dry day is highly recommended.

You may have noticed that I’ve described this circular walk a ’round’ and not a ‘horseshoe’, well, I’ve never fully understood the term ‘horseshoe’ in association with a walking route; it obviously describes a general shape of mountain tops, but generally, a walk consists of much more, including the approach and finishing where you started; hence the term ’round’. 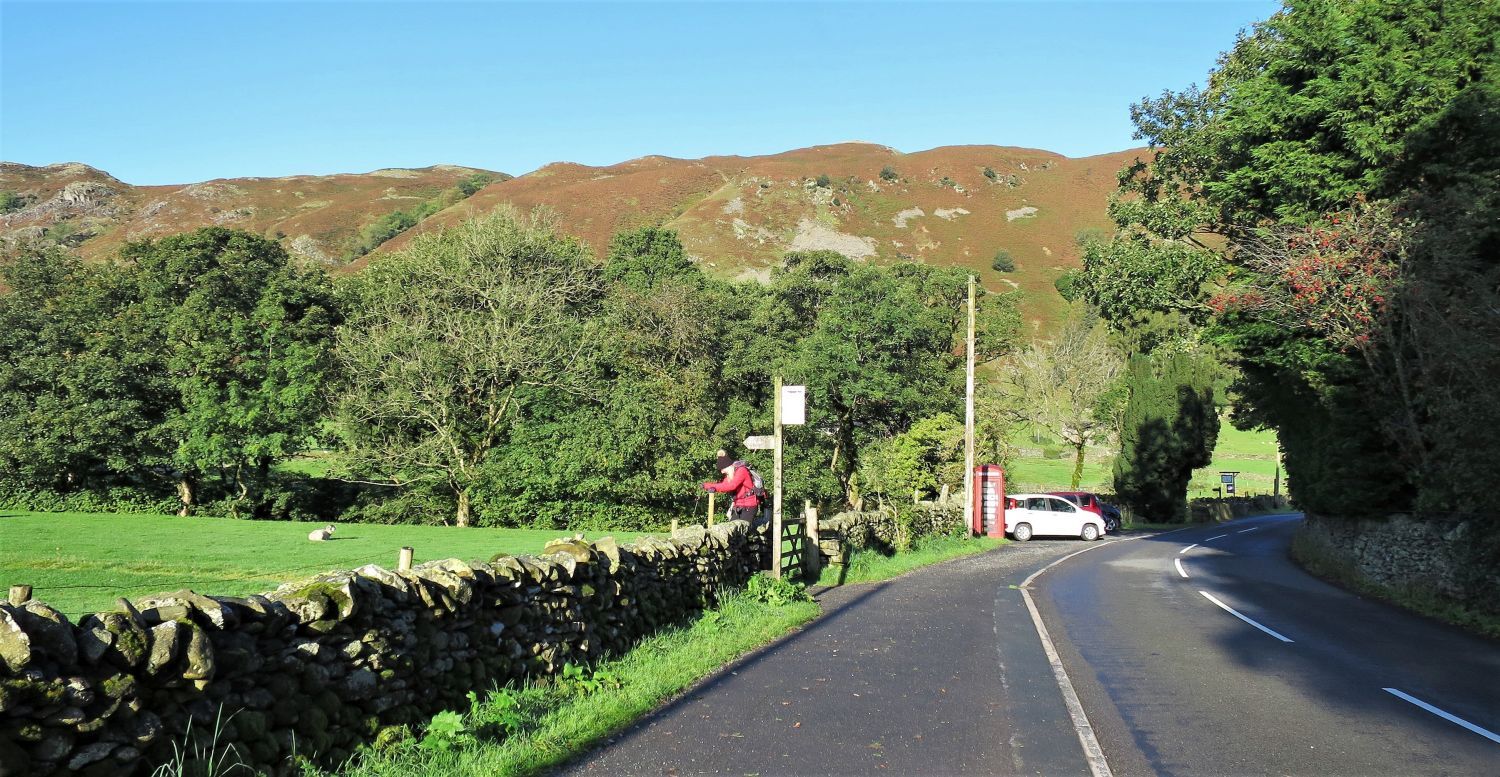 On the A592, where the valleys of Deepdale and Patterdale meet, a parking area provides enough room for about 10 cars. It can soon fill up during the busiest months though, so an early start is recommended. A limited bus service, the 508, runs between Penrith and Windermere, but please note at certain times it only goes to the village of Patterdale from Penrith.

“If taking the track from the parking place at Bridgend, turn left at the sign….”

Our ascent of Hartsop above How begins right from the parking area; initially the ascent is gentle, but the more undulating part of the ridge soon appears over the wooded area of Deepdale Park.

“….slight bumps in the ground in this area mark the boundary of an ancient settlement. Then follow the arrows and cairns up through the wood.” Hartsop above How 3
CJ

It’s not long until some of the main features of the ’round’ appear. Here, the sharp peak of Gavel Pike on the eastern shoulder of St Sunday Crag towers over the valley of Deepdale. 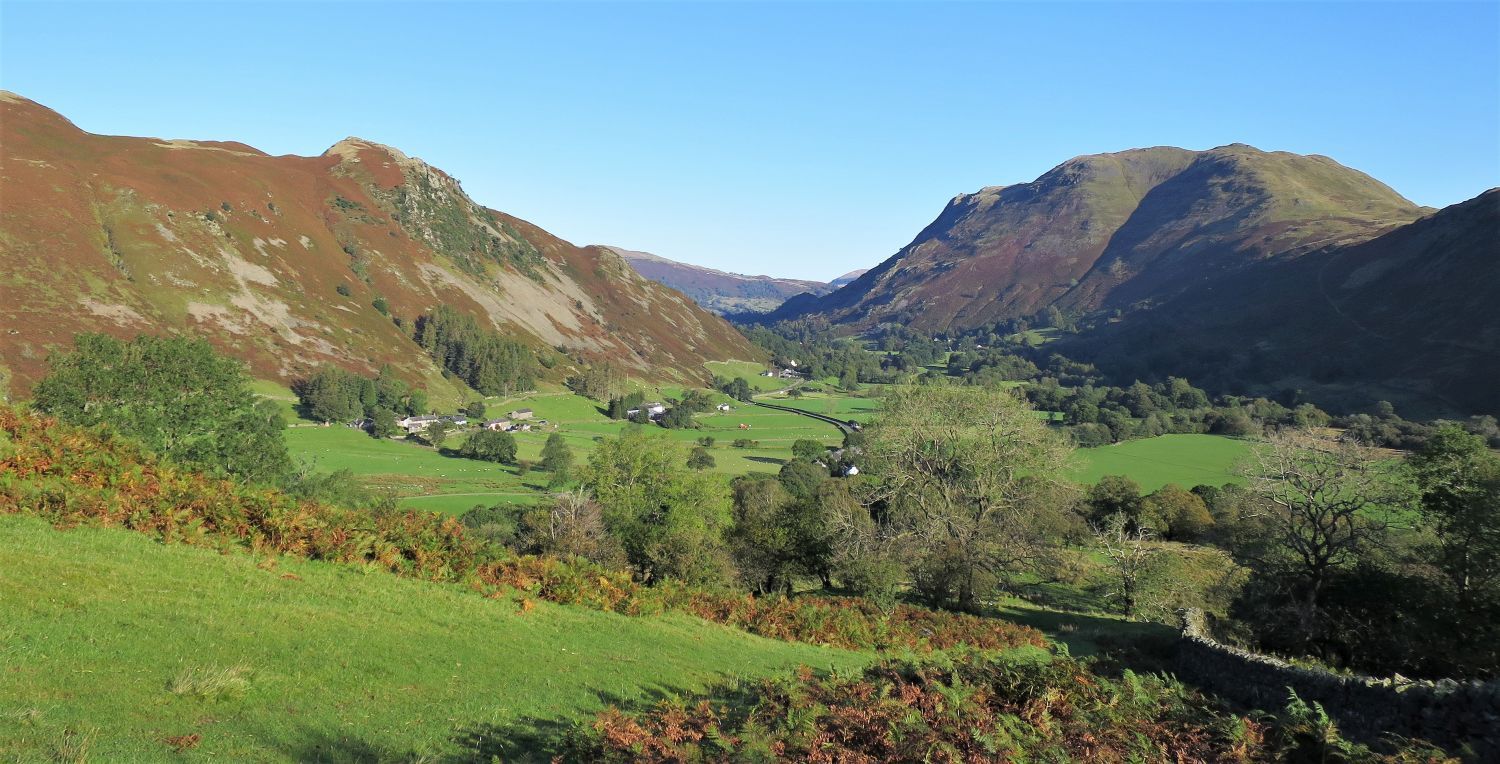 Looking back towards Arnison Crag and Place Fell over Patterdale

We now join a wall which follows the ridgeline for half its length.

The ridgeline above Deepdale Park

The ridge of Hartsop above How is a series of humps, crags and hollows; here is the first of the ‘humps’. 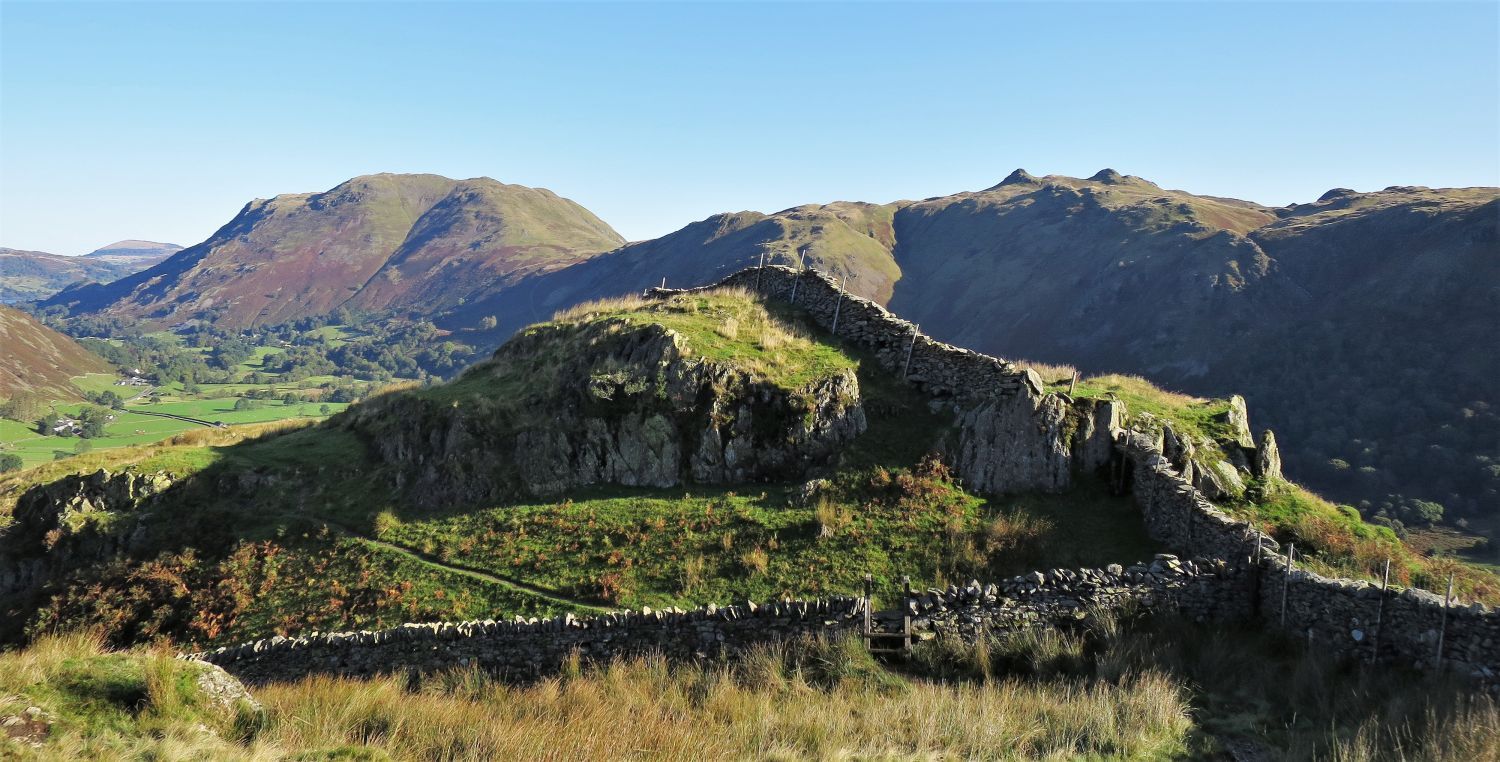 The wall with the ladder stile marks the boundary and exit of Deepdale Park.

The rest of the ridge leading to Hart Crag and Fairfield, with Deepdale on the right 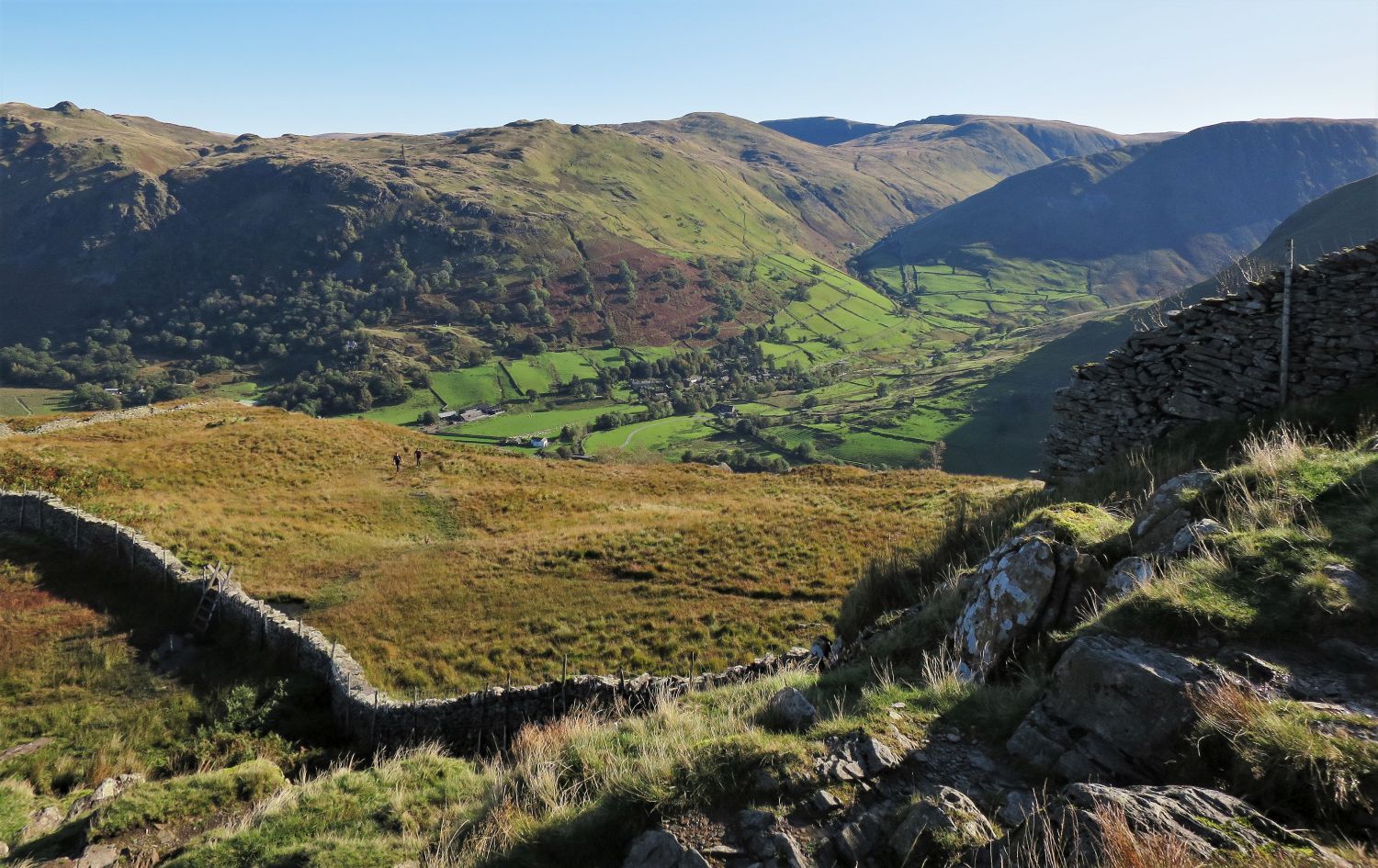 Looking down to the hamlet of Hartsop in upper Patterdale

You can be forgiven to think this second ‘hump’ is Gale Crag, but the latter is much further yet. The two walkers you can see in the picture have arrived from Cow Bridge and via Low Wood.

Hart Crag and Fairfield over Deepdale, from the approach to Gale Crag

Hartsop above How from the summit of Gale Crag

Looking back down the ridge towards Patterdale, with Deepdale on the left

Dove Crag, Hart Crag and Fairfield, from the approach to Hartsop above How over Hoggill Brow

Just before Hartsop above How, which is the main summit of the ridge, the ridge wall veers left and descends steeply into Dovedale.

“Only in the vicinity of the summit is it at all narrow, but both flanks are steep throughout most of its three-mile length, the slopes above Dovedale being especially rough.” Hartsop above How 2
AW

On the approach to Hartsop above How from Hoggill Brow

The author on the ‘true’ summit of Hartsop above How

A rocky knoll to the west of a cleft that splits Gill Crag, is the highest point…. 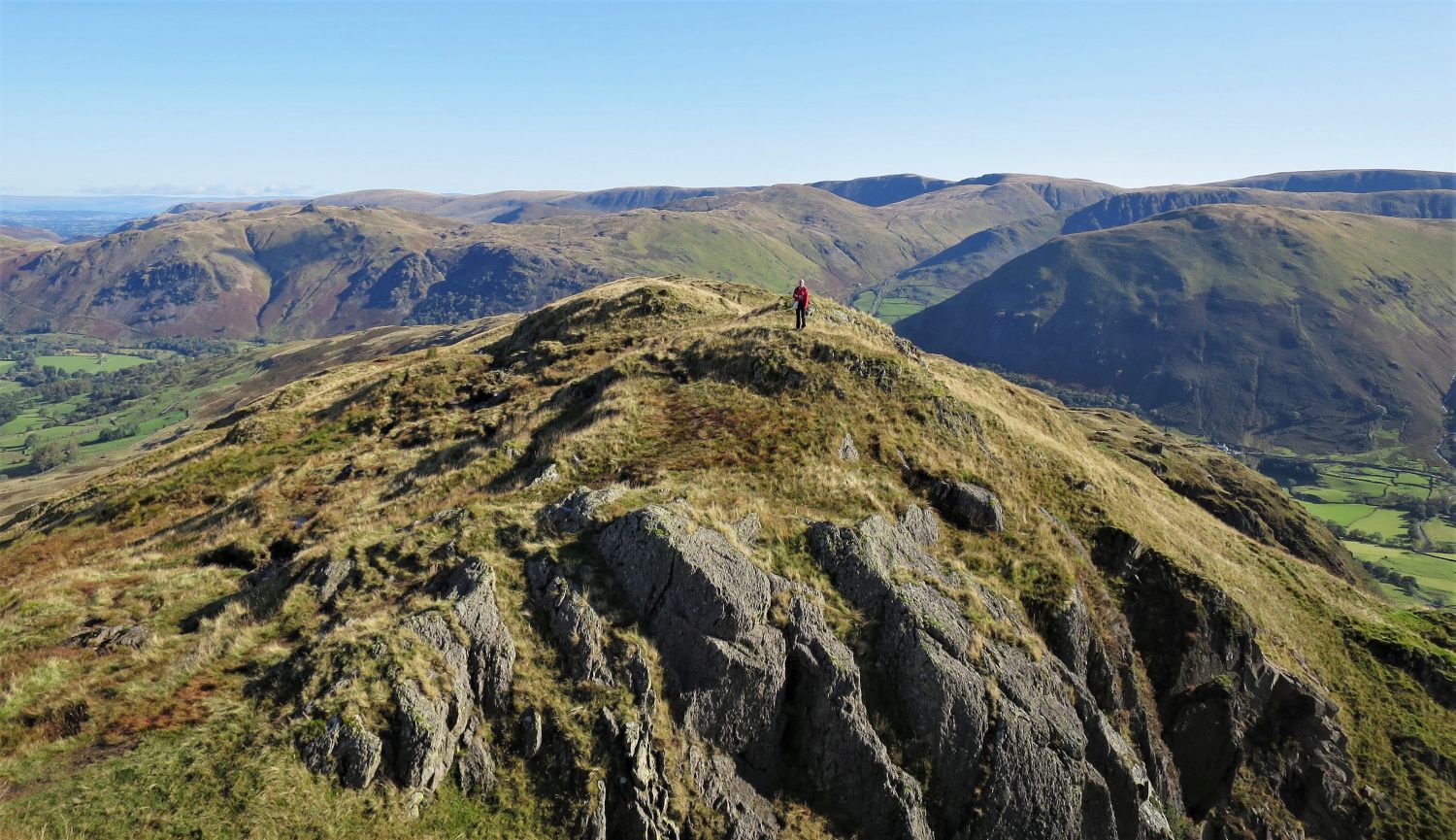 Looking back at the ‘lower’ summits of Hartsop above How

….while three grassy knolls to the east of the cleft are clearly lower. 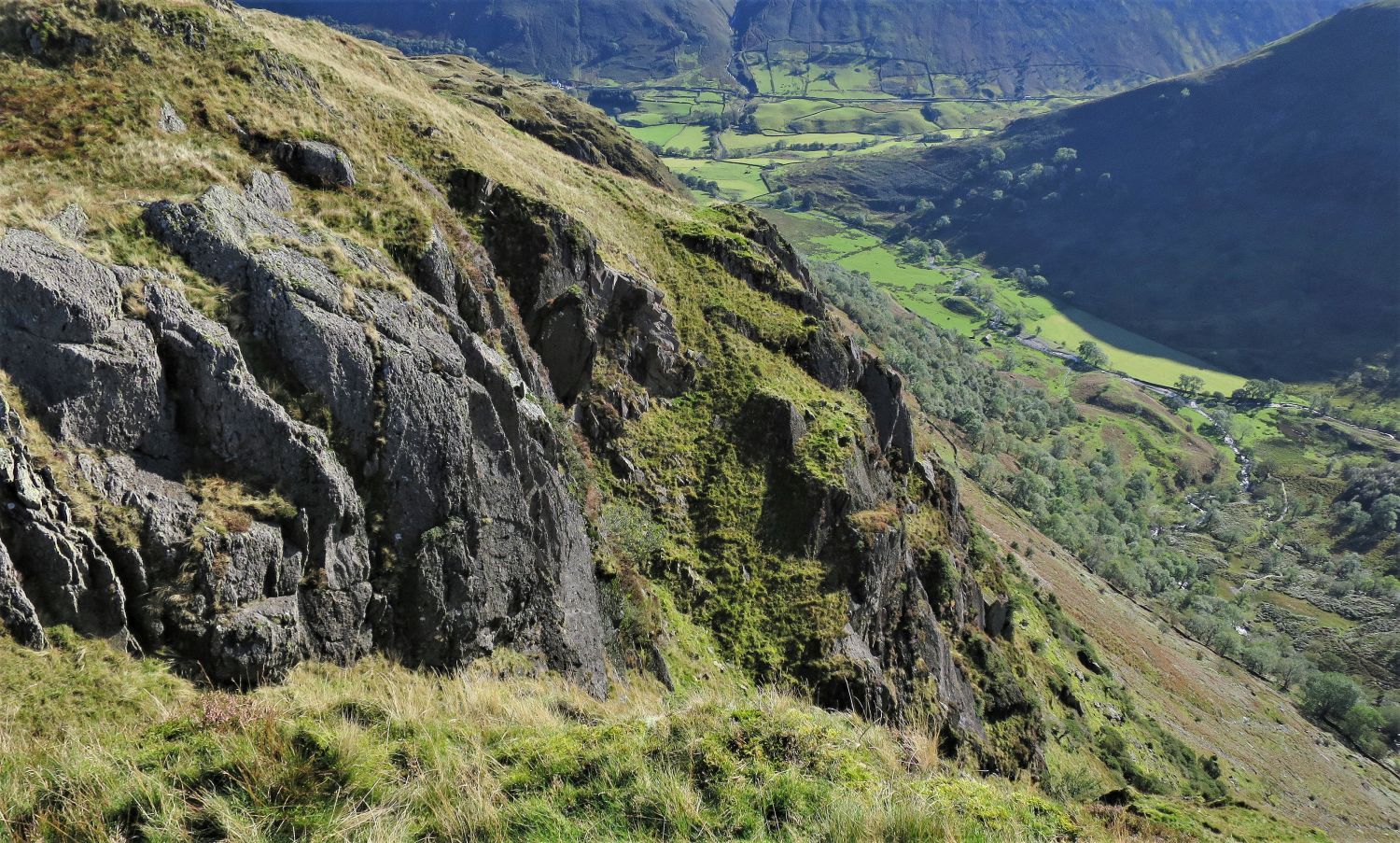 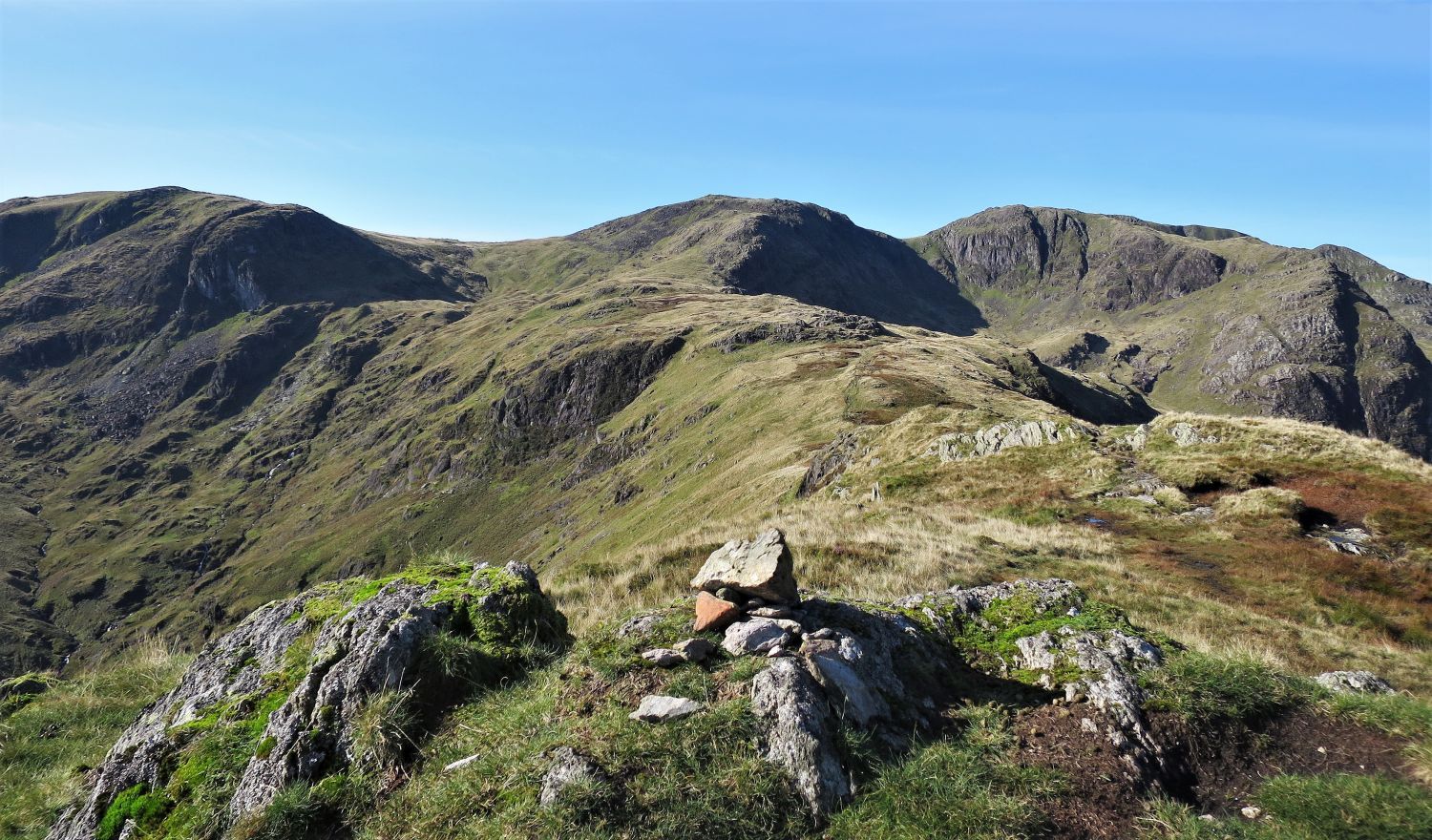 Dove Crag, Hart Crag, Fairfield and Greenhow End from the summit of Hartsop above How

“There is no better place for appraising the ruggedness of the eastern crags and coves of the Fairfield group of fells.” Hartsop above How 4
AW 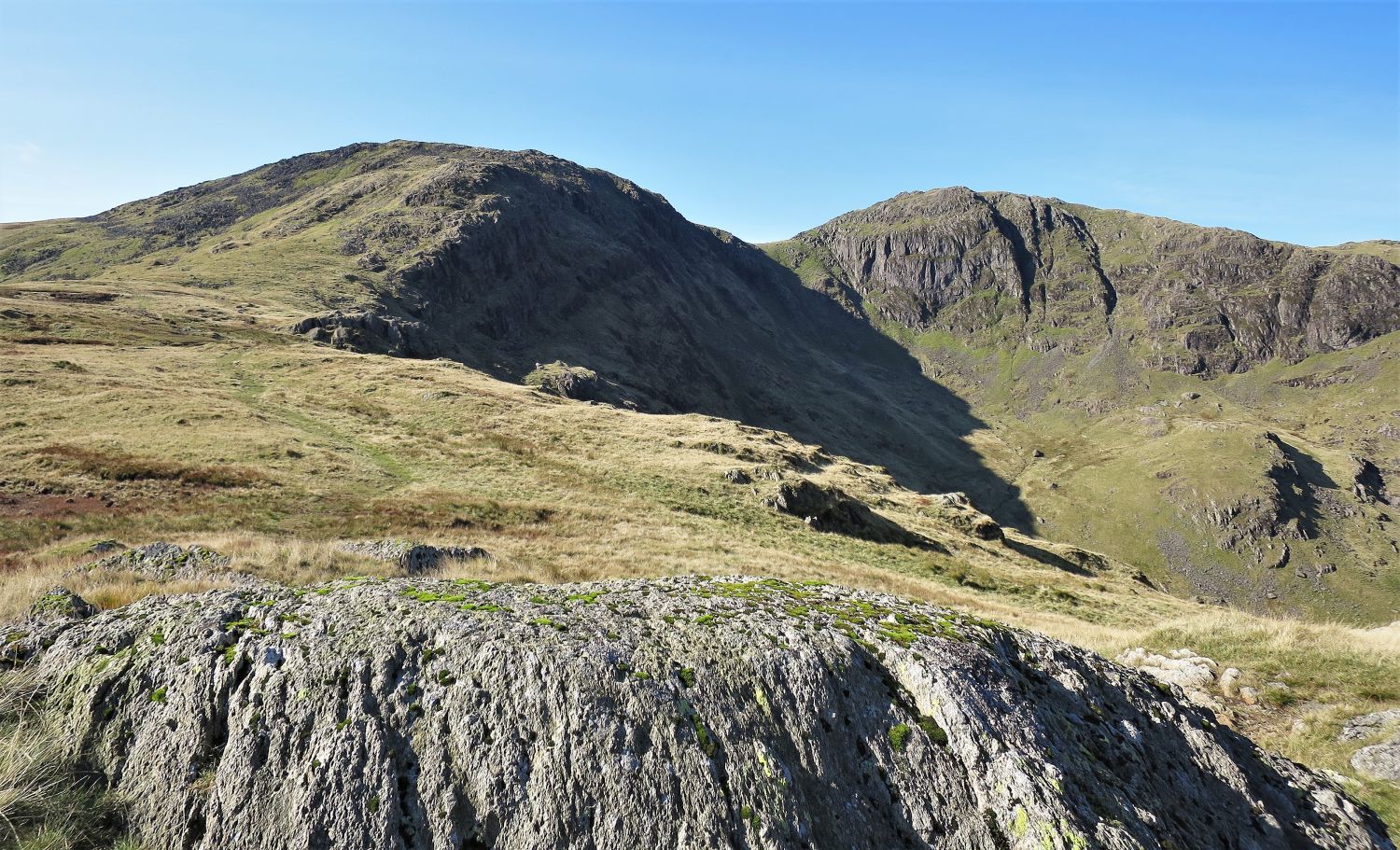 Hart Crag, Scrubby Crag and Link Cove from the summit of Blake Brow 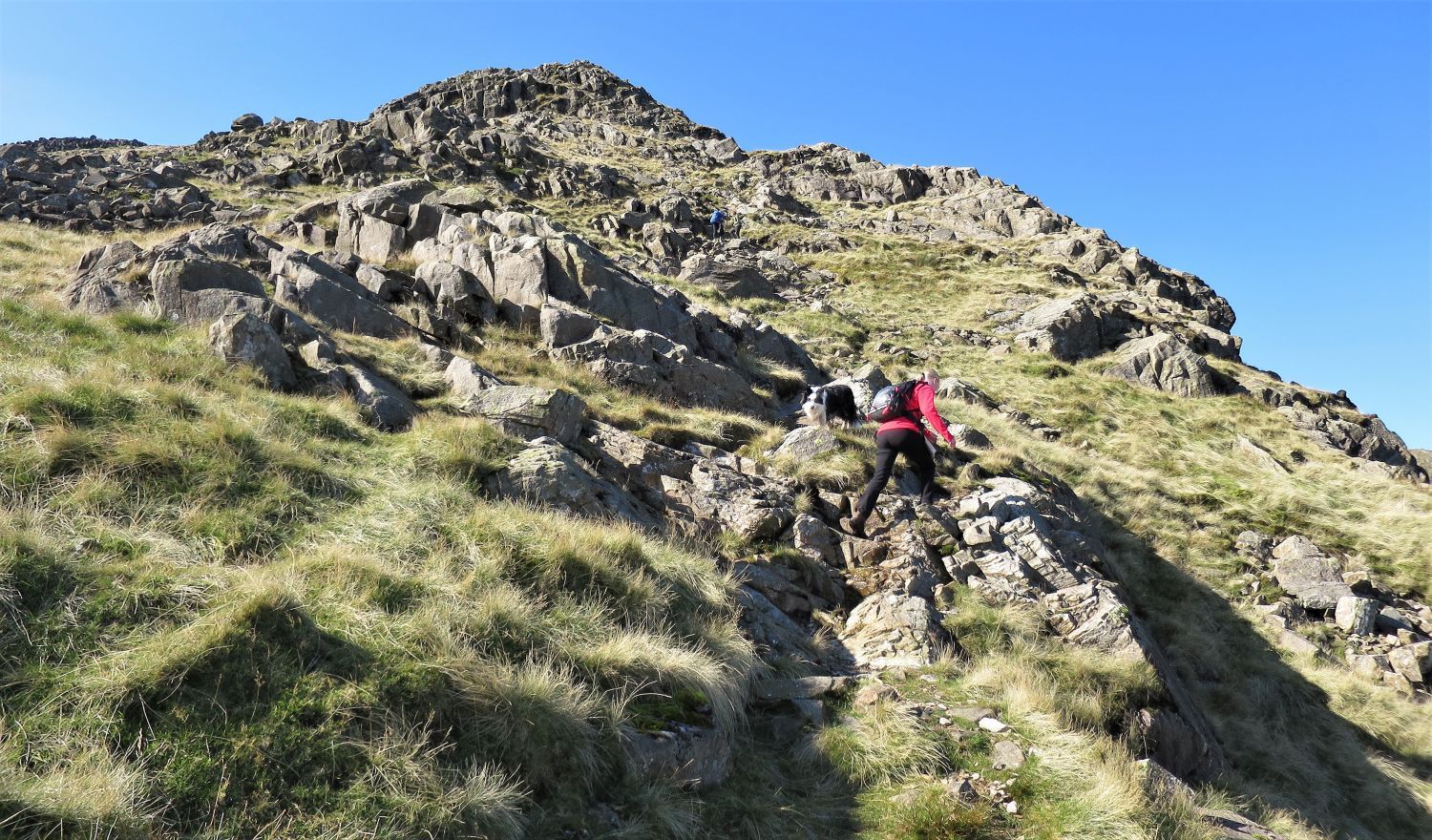 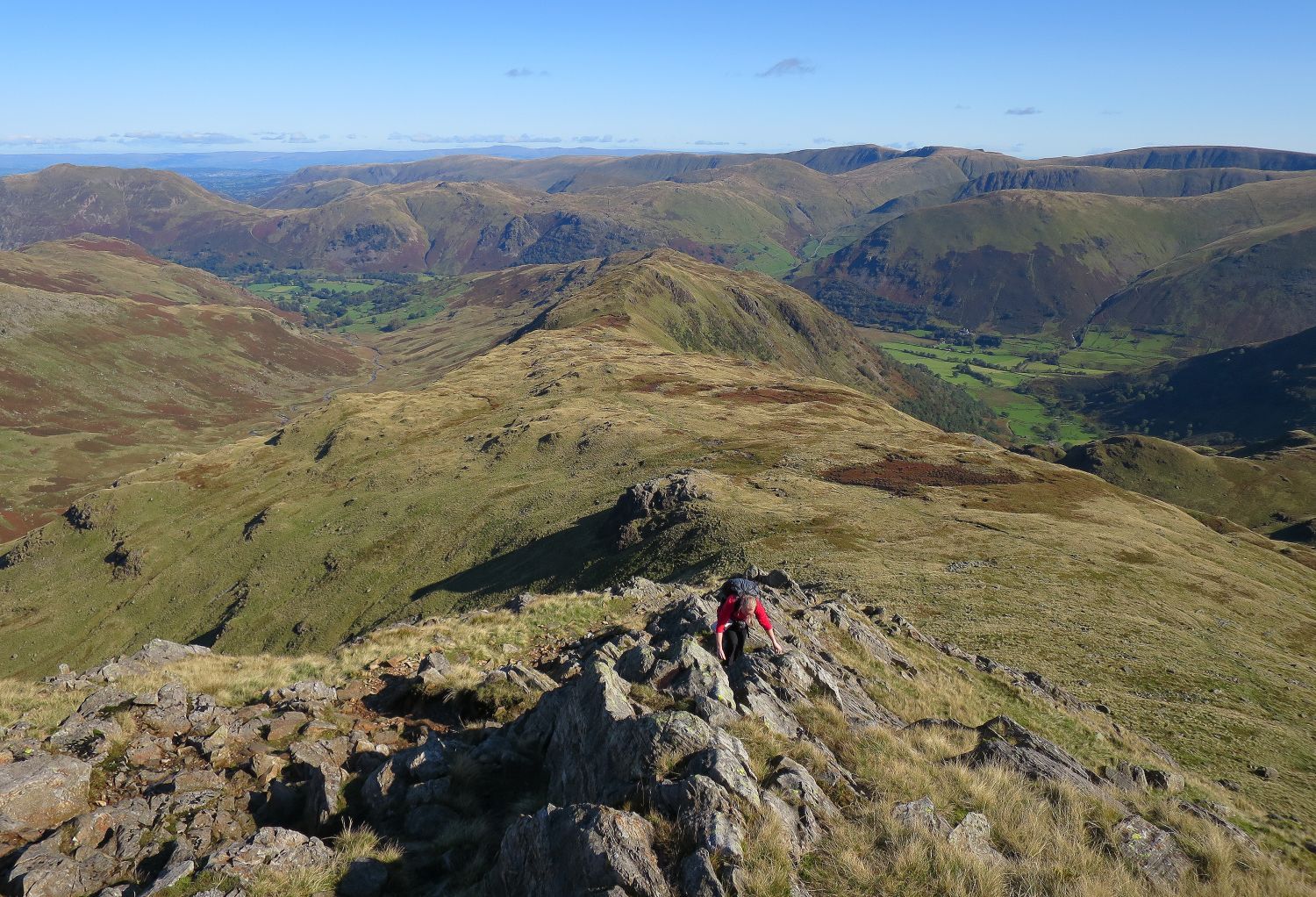 The route to the summit is not in doubt, however, a long crest of rock on the upper section, that ascends parallel to the path, is much more fun.

“To the north-east, Hart Crag follows usual mountain structure by sending out a long declining ridge, which forms a high barrier between desolate Deepdale and delectable Dovedale.” Hart Crag 2
AW

Fairfield from the summit of Hart Crag 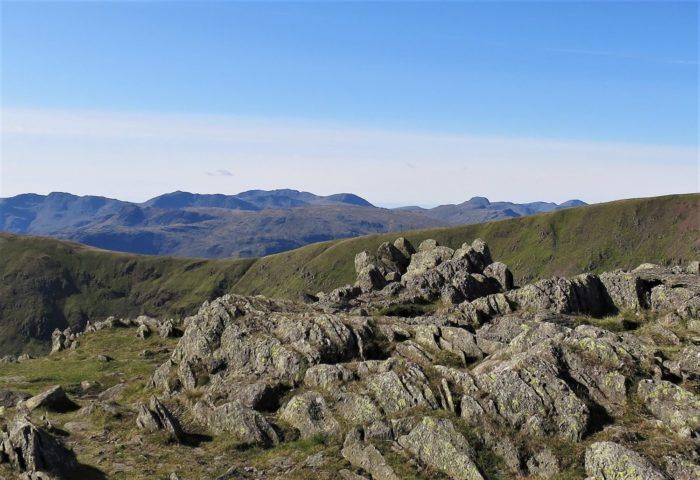 “Hart Crag is a little too near to the great mass of Fairfield to provide a well balanced view. The panorama in other directions is extensive, but the picture as a whole is disappointing.” Hart Crag 8
AW 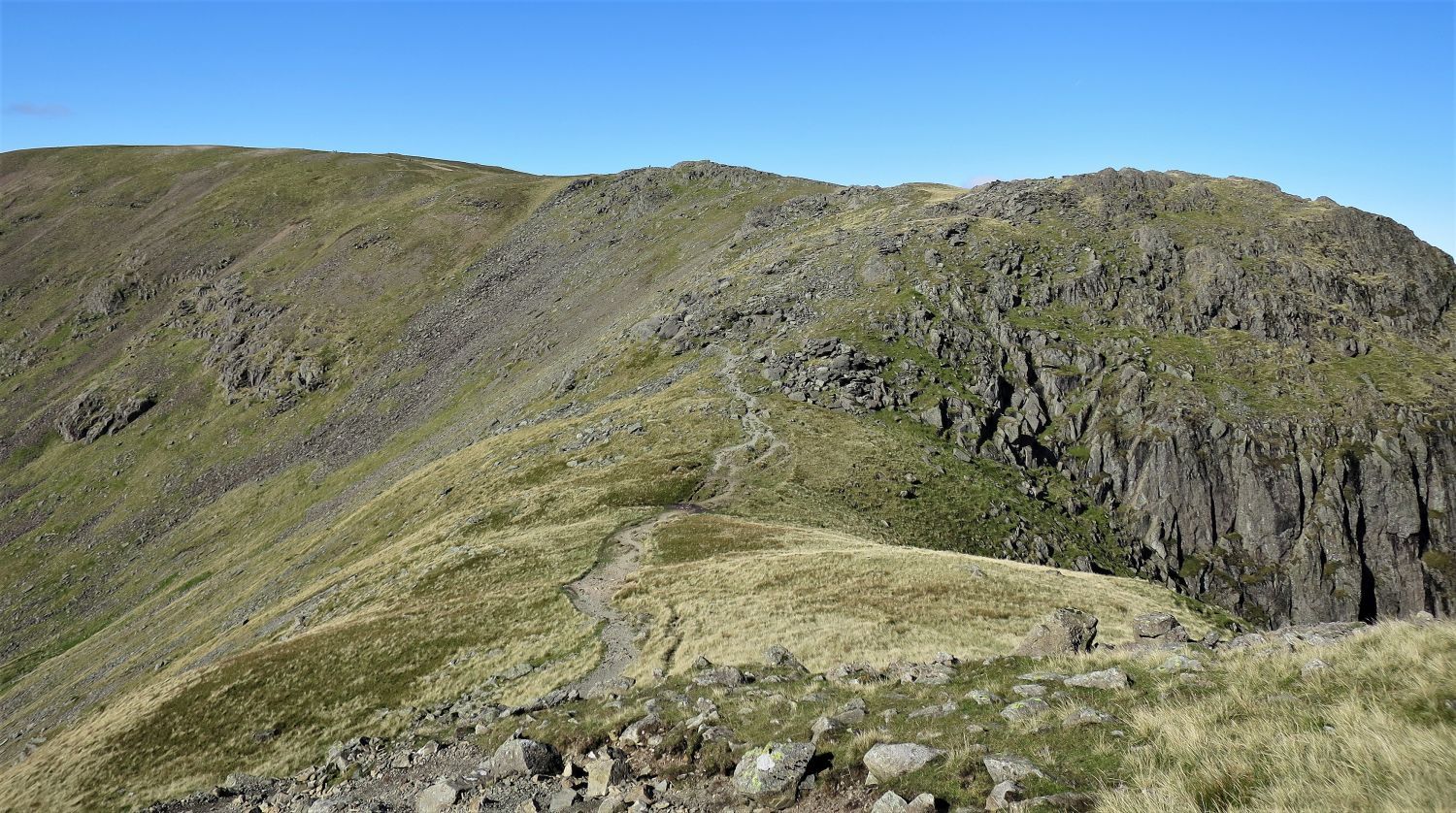 Fairfield and Scrubby Crag from above Link Hause

The slope to the left is Rydal Head (or correctly, the head of Rydale), and the gully on the right is the head of Link Cove. 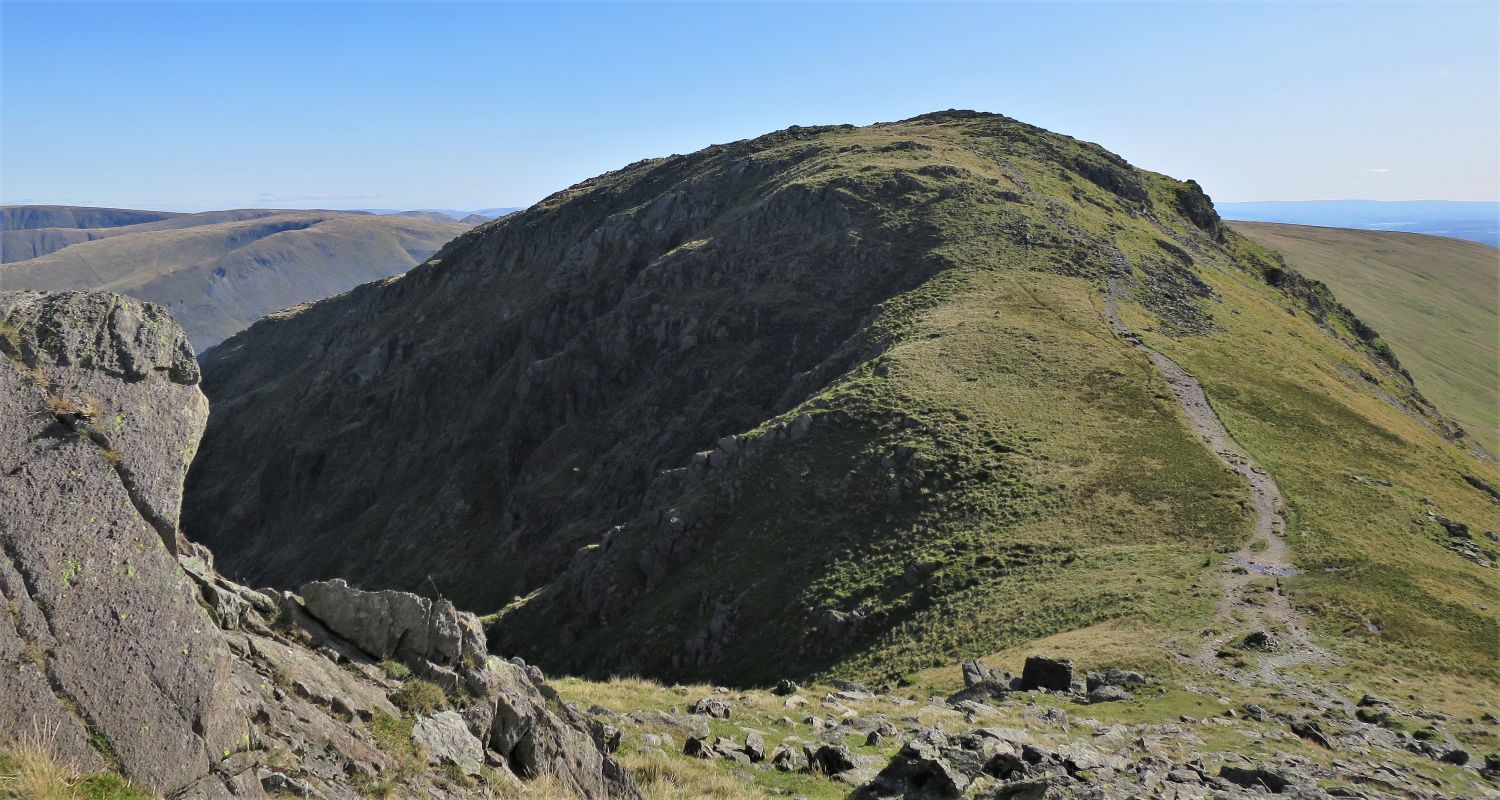 The summit plateau of Fairfield

“The summit of Fairfield is an extensive grassy plateau. The absence of distinguishing natural features makes it, in mist, particularly confusing, and the abundance of cairns is then a hindrance rather than a help. The actual top is flat and its surface is too rough to bear the imprint of paths, and the one definable is a tumbledown windbreak of stones, built as a short wall and offering shelter only to persons of imagination….”

Book One
The Eastern Fells
Fairfield 9
“The Summit”

“….Thirty yards in front of the shelter is the principal and largest cairn, which has five alcoves scooped out of it. Mention should be made of the excellent turf on this wide top; weary feet will judge it delightful.” Fairfield 9
AW (revised by CJ) 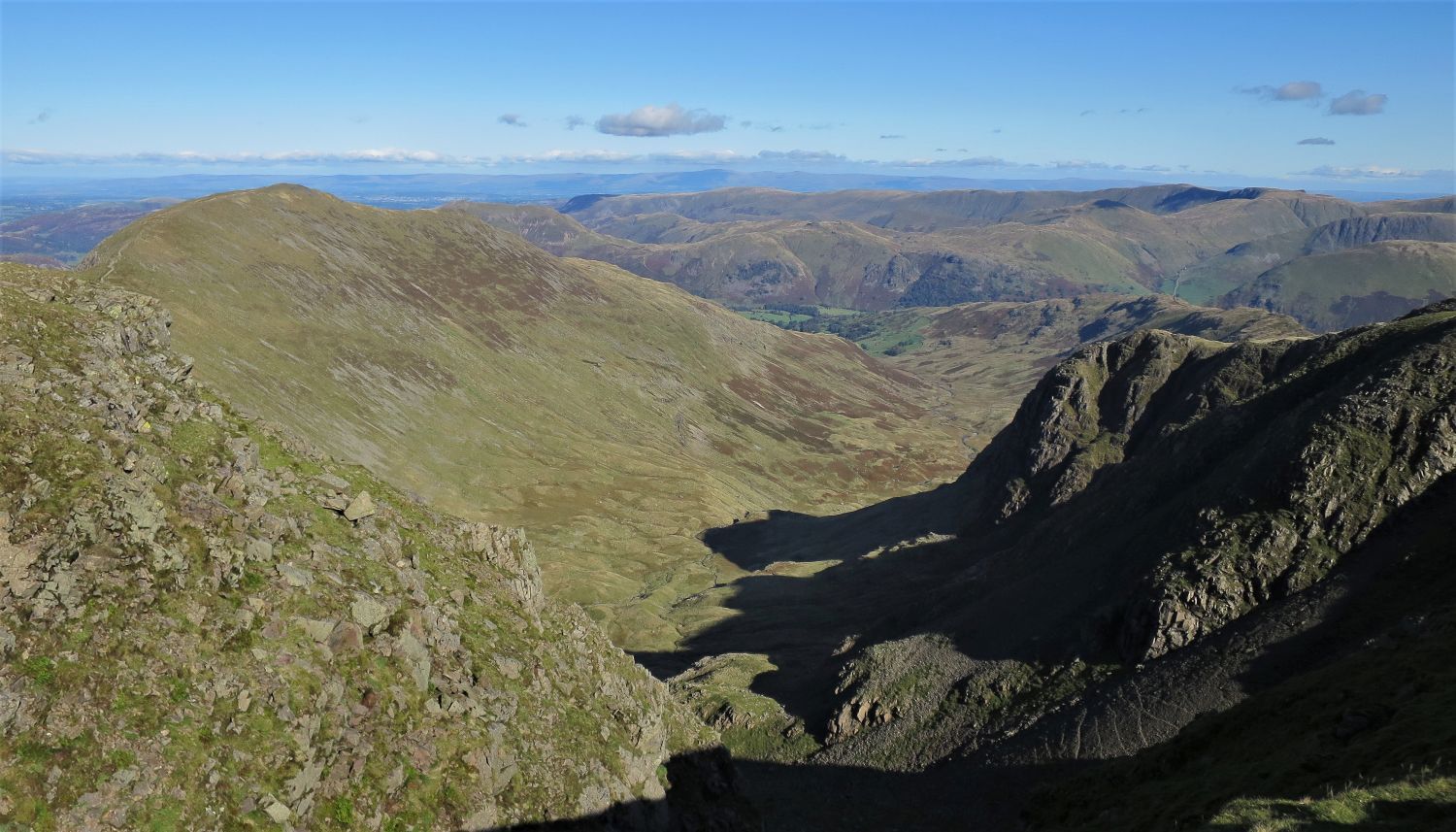 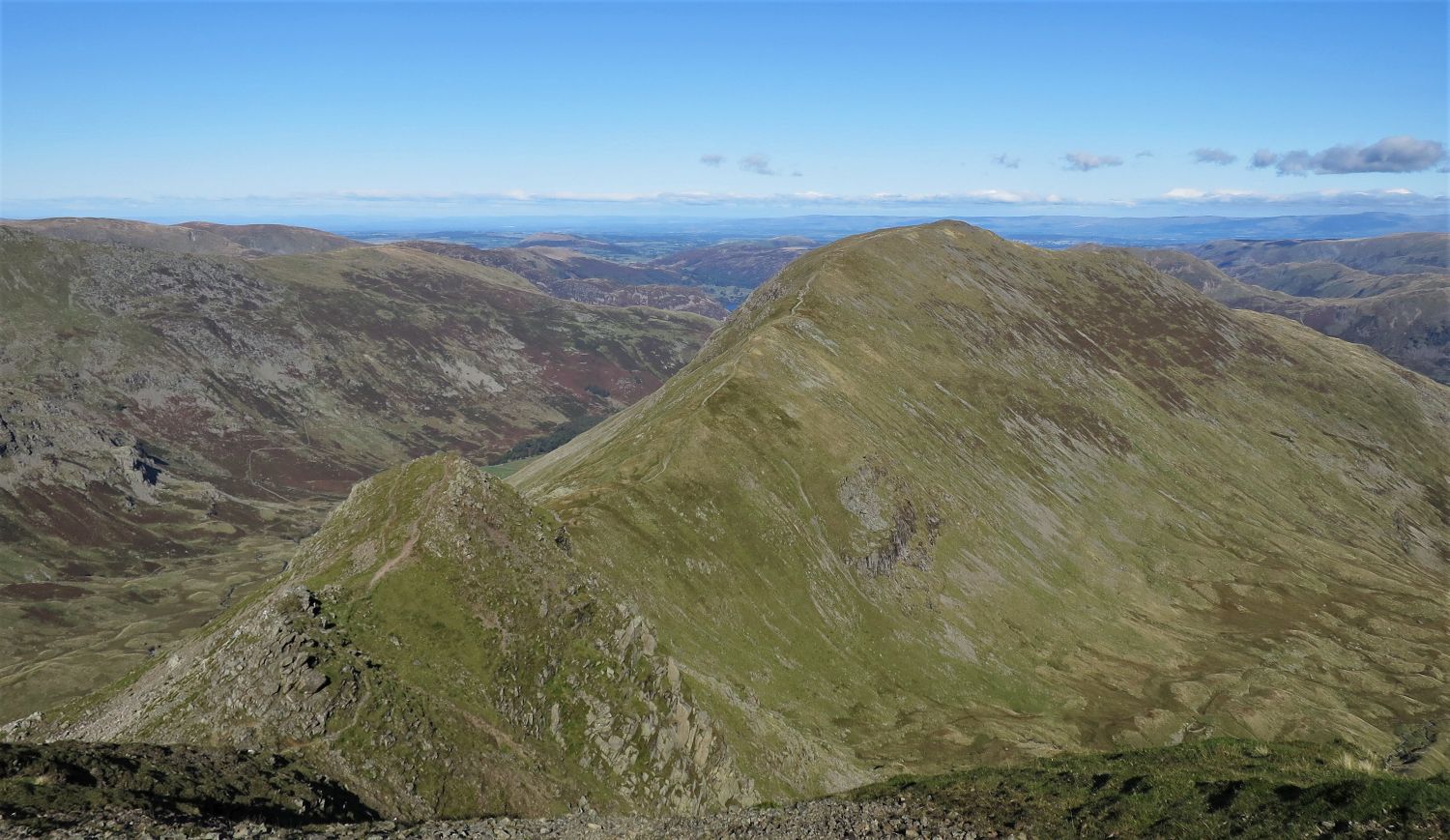 “There is no trouble in clear weather in identifying the various routes of descent, the best of which lies over Cofa Pike and St Sunday Crag to Patterdale: an exhilarating and beautiful walk.” Fairfield 9
AW

The Helvellyn range from the descent to Cofa Pike

The approach to Cofa Pike

“Three ridges leave the top of Fairfield: one goes south over Great Rigg to end abruptly at Nab Scar above Rydal Water; another, the spine of the Fairfield system, keeps a high level to Dove Crag, traversing Hart Crag on the way, and the third, and best, runs north inclining east over the splintered crest of Cofa Pike and on to St Sunday Crag.” Fairfield 3
AW 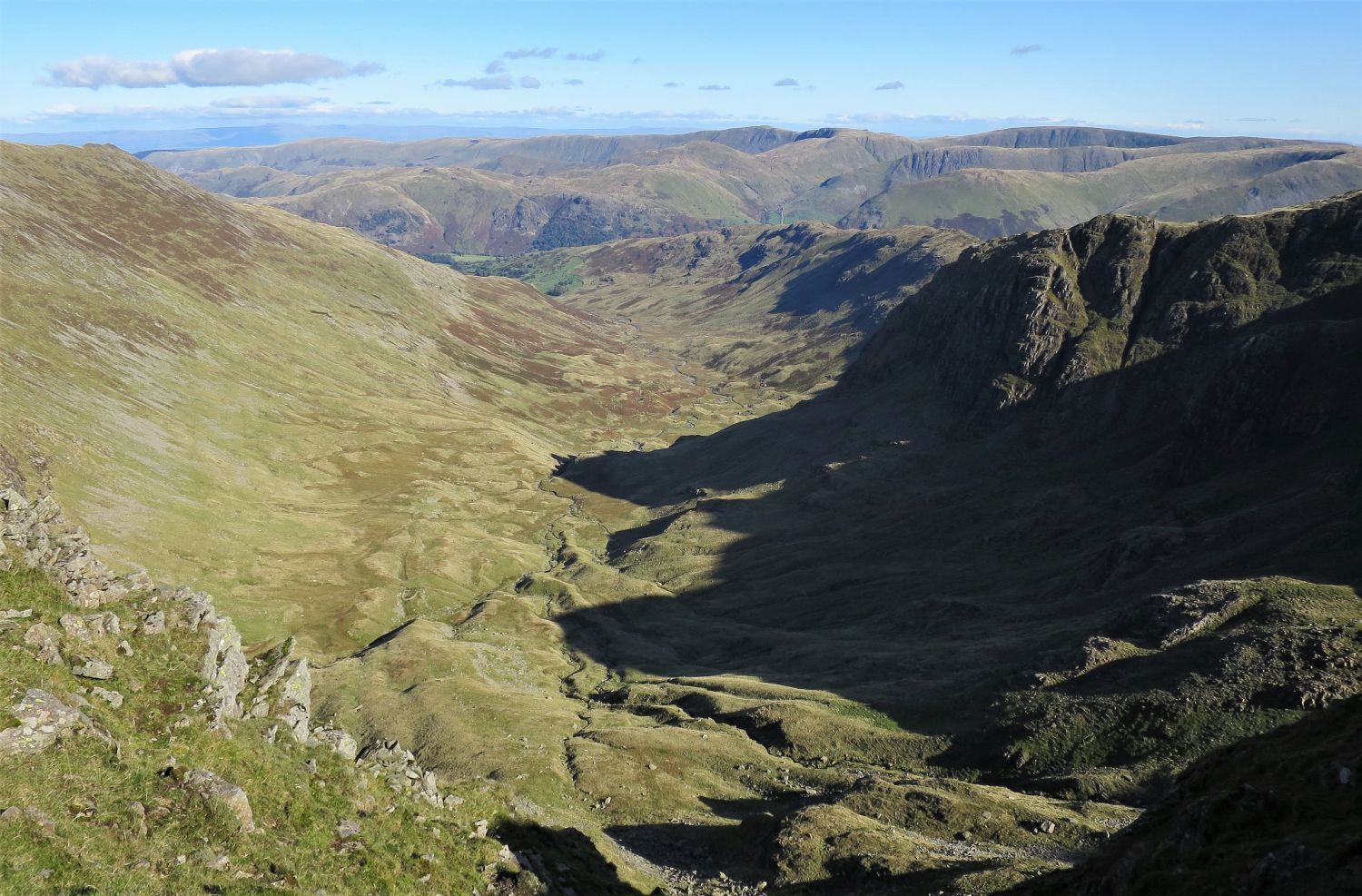 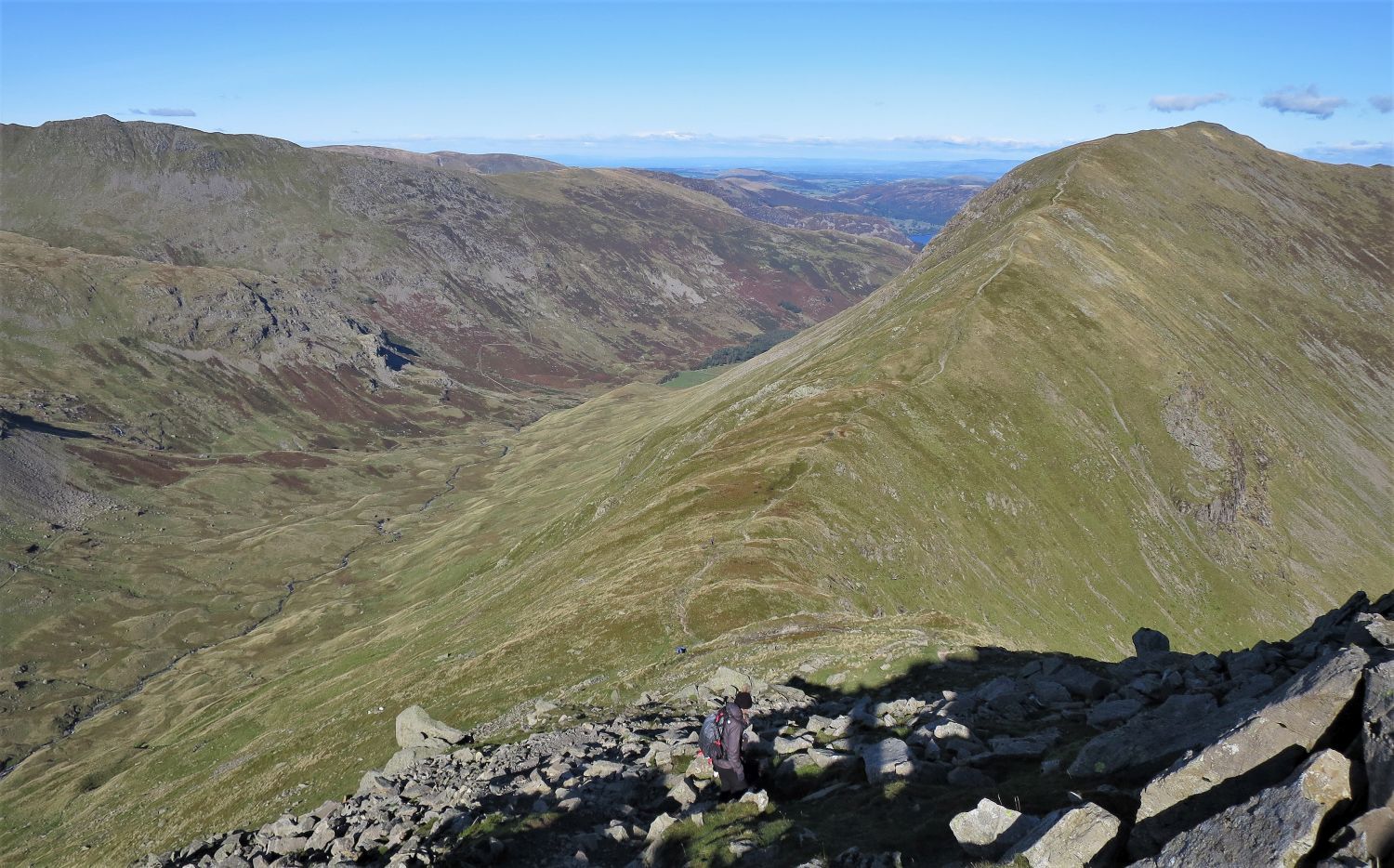 Grisedale and St Sunday Crag from the descent to Deepdale Hause

“Every walker who aspires to high places and looks up at the remote summit of St Sunday Crag will experience an urge to go forth and climb up to it, for its challenge is very strong. Its rewards are equally generous, and altogether this is a noble fell. Saint Sunday must surely look down on his memorial with profound gratification.” St Sunday Crag 2
AW

The ascent of St Sunday Crag from Deepdale Hause

Although slender in steepness, tired legs will find the ascent of the south-east ridge a long slog; false summits don’t help the mind either! 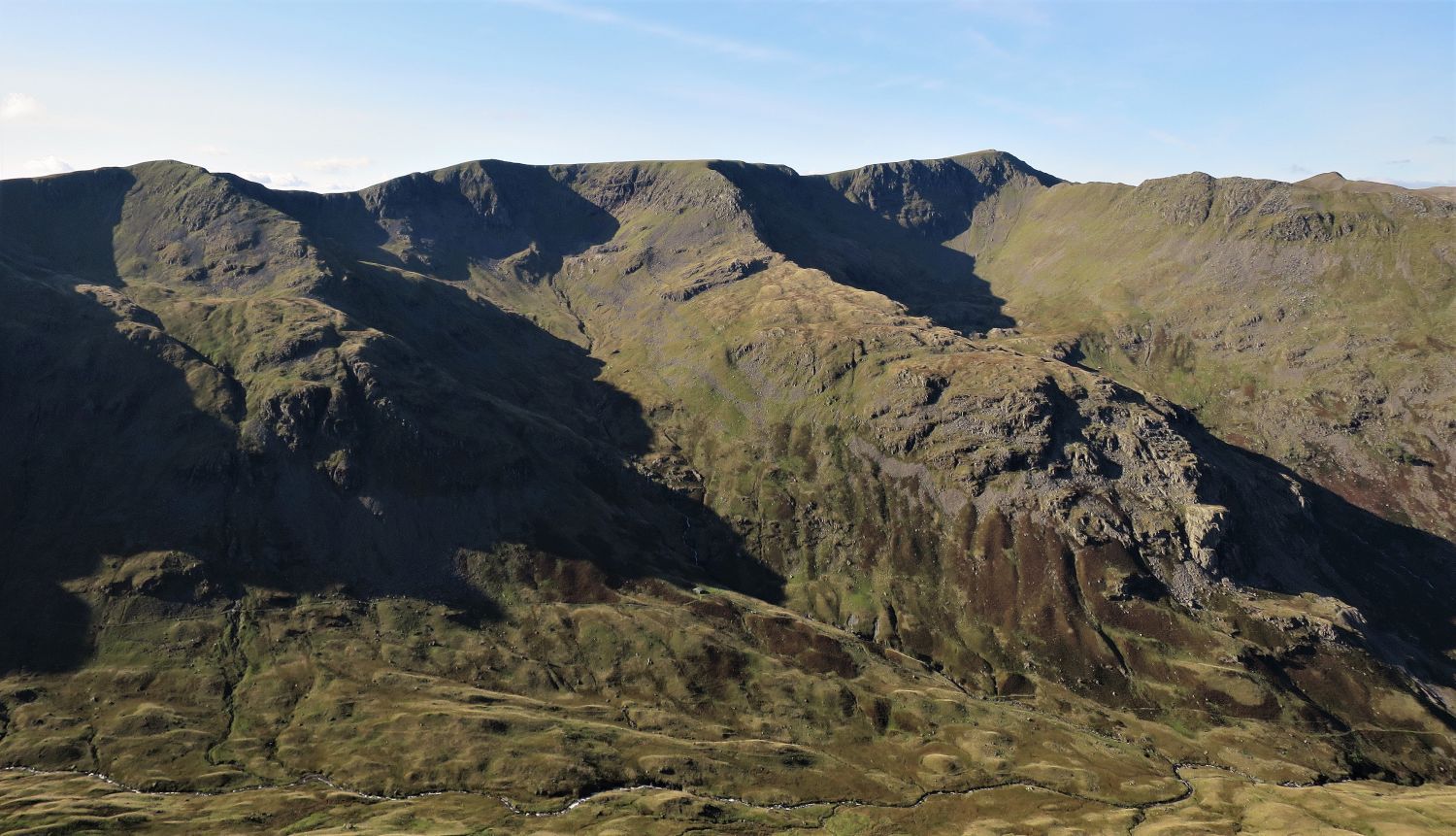 Looking across to Dollywaggon Pike, Nethermost Pike and Helvellyn

Looking north-east from the summit of St Sunday Crag

“The summit hardly lives up to the promise of the ridges; it is merely a slight stony mound set on the edge of a plateau – a pleasant place of mosses and lichens and grey rocks, but quite unexciting.” St Sunday Crag 7
AW

The saddle leading to Gavel Pike

Rather than continuing on towards the north-east ridge, a worthwhile diversion to Gavel Pike is rewarding; this is the beginning of the east ridge.

Ullswater and Place Fell from the summit of Gavel Pike

“Gavel Pike has a much more attractive summit than the main fell; here are bilberries and heather and natural armchairs among the rocks of the tiny peaked top, and splendid views to enjoy. A delectable place for (packed) lunch!” St Sunday Crag 7
AW 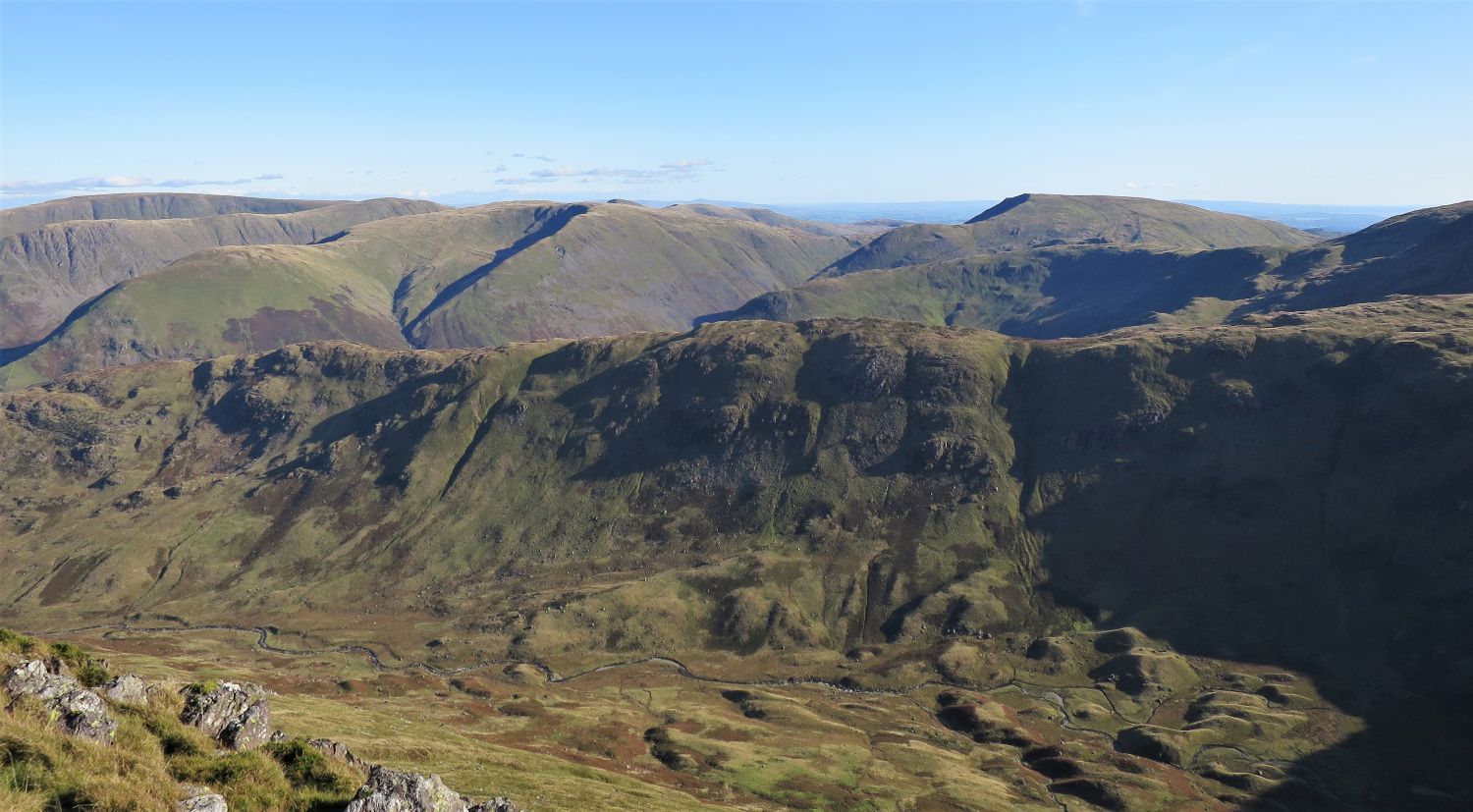 Our morning’s walk is now in full view. Here, on the ridge leading to Hart Crag, the three principal tops of Gale Crag, Hartsop above How and Blake Brow, are separated by two narrow ravines. 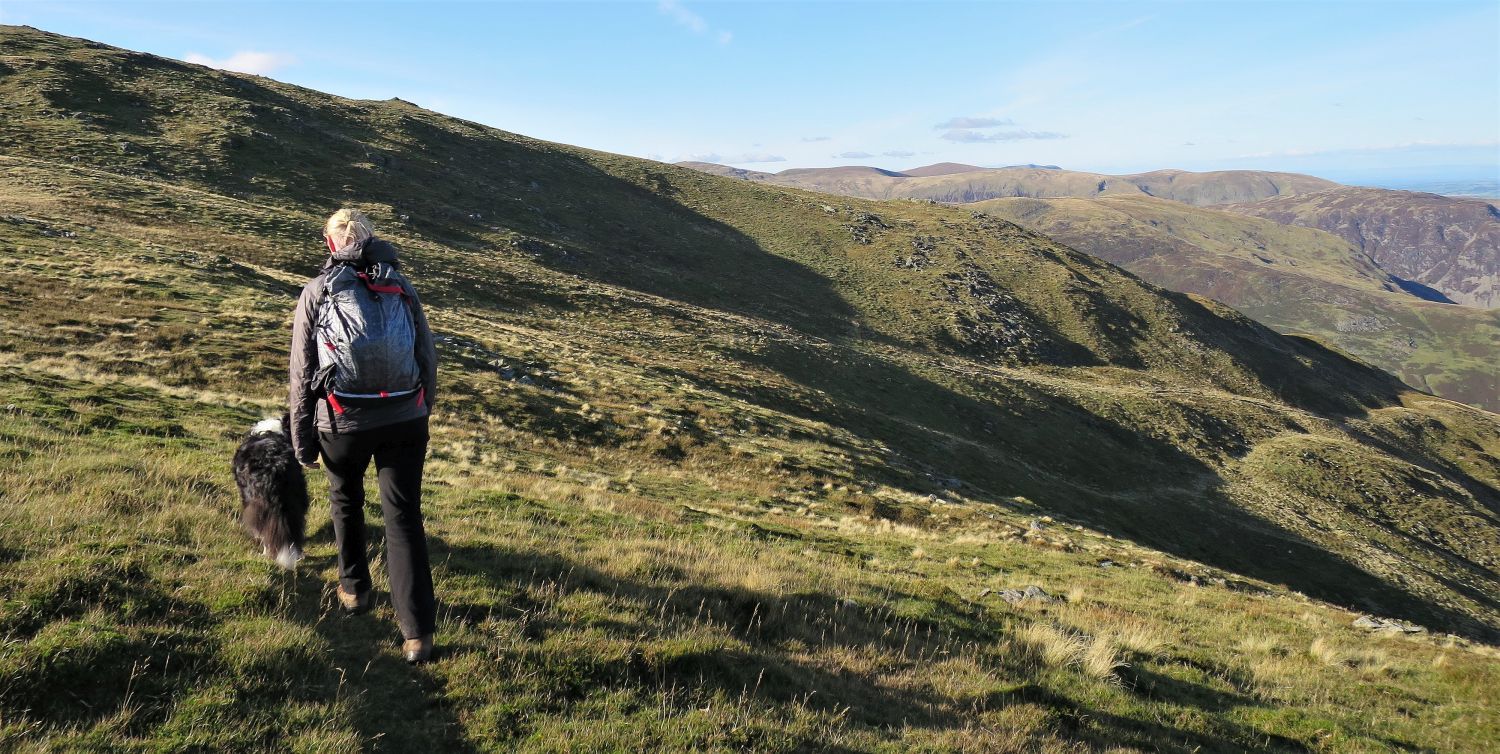 We now leave Gavel Pike and the east ridge, and follow a wonderful path that traverses St Sunday Crag before reaching its north-east ridge; this is a lovely part of the walk.

The main path that descends from St Sunday Crag, via its north-east ridge, continues its journey to Patterdale by traversing the Grisedale flank of Birks; walkers can be seen ahead on this traverse, however, we’ll be taking the path that follows the wide undulating ridge of Birks, before descending to Arnison Crag and Patterdale.

“The north-east shoulder of St Sunday Crag falls sharply to a depression beyond which a grassy undulating spur, featureless and wide, continues with little change in elevation towards Ullswater….” Birks 2
AW

The wide ridge of Birks

The far grassy knoll, just above Jaclyn, is the highest of a group of undulations on this wide ridge.

Book One
The Eastern Fells
Birks 6
“The View – Ullswater”

“The summit has no interesting features. Do not believe out-of-date Ordnance Survey maps that promised a beacon here; all that can be found is an insignificant mound of stones almost obscured by grass. A more considerable heap of bigger stones further along the ridge appears to be a collapsed edifice of some kind.” Birks 5
AW (revised by CJ) 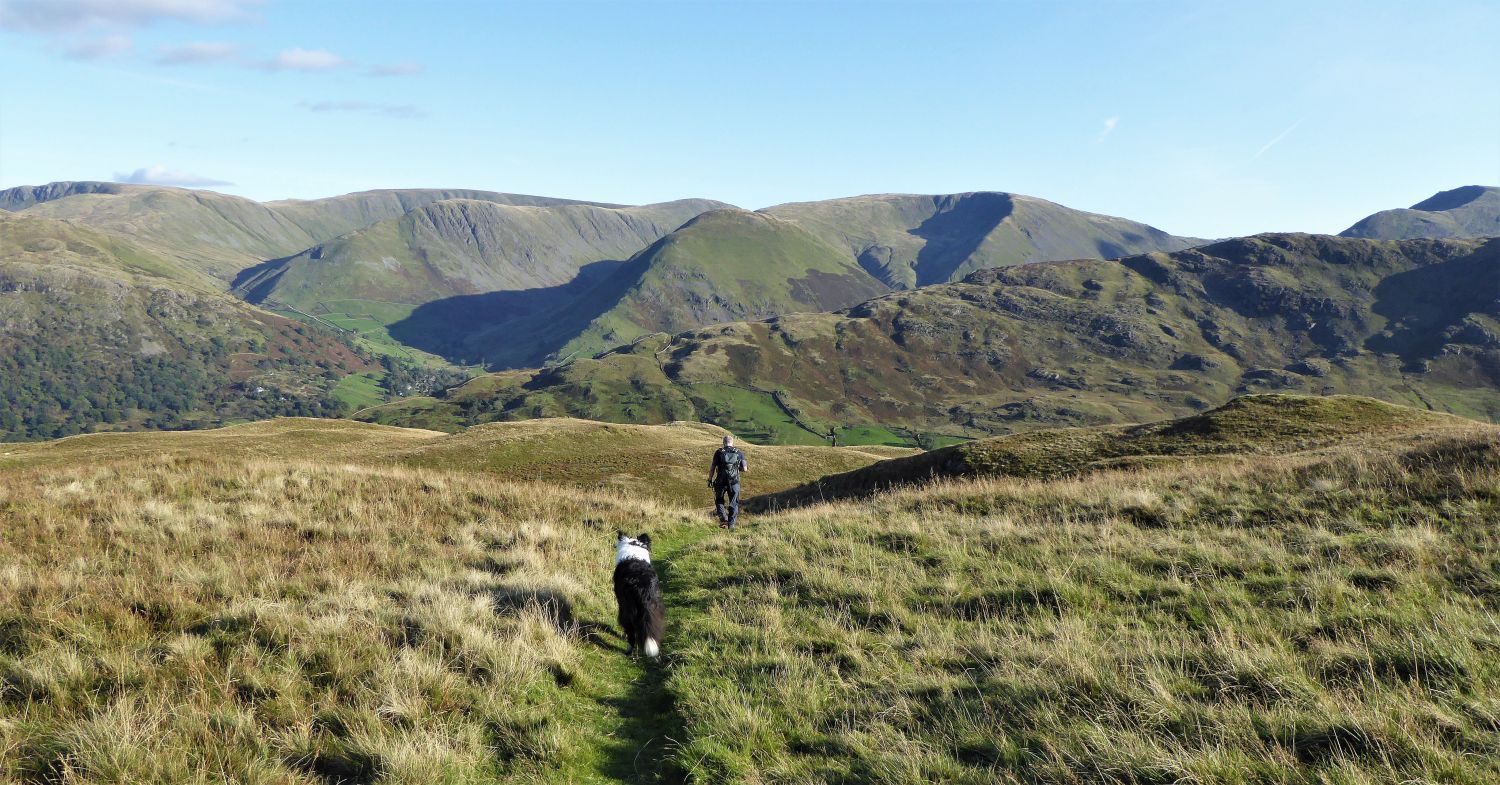 The path to Trough Head

We now head down to Trough Head, which is a hause (neck or pass) connecting Birks with our next objective, Arnison Crag. Initially, from the summit of Birks, the path descending to Trough Head is very indistinct, but head eastwards over grass and a path soon becomes visible and is easy to follow thereafter. 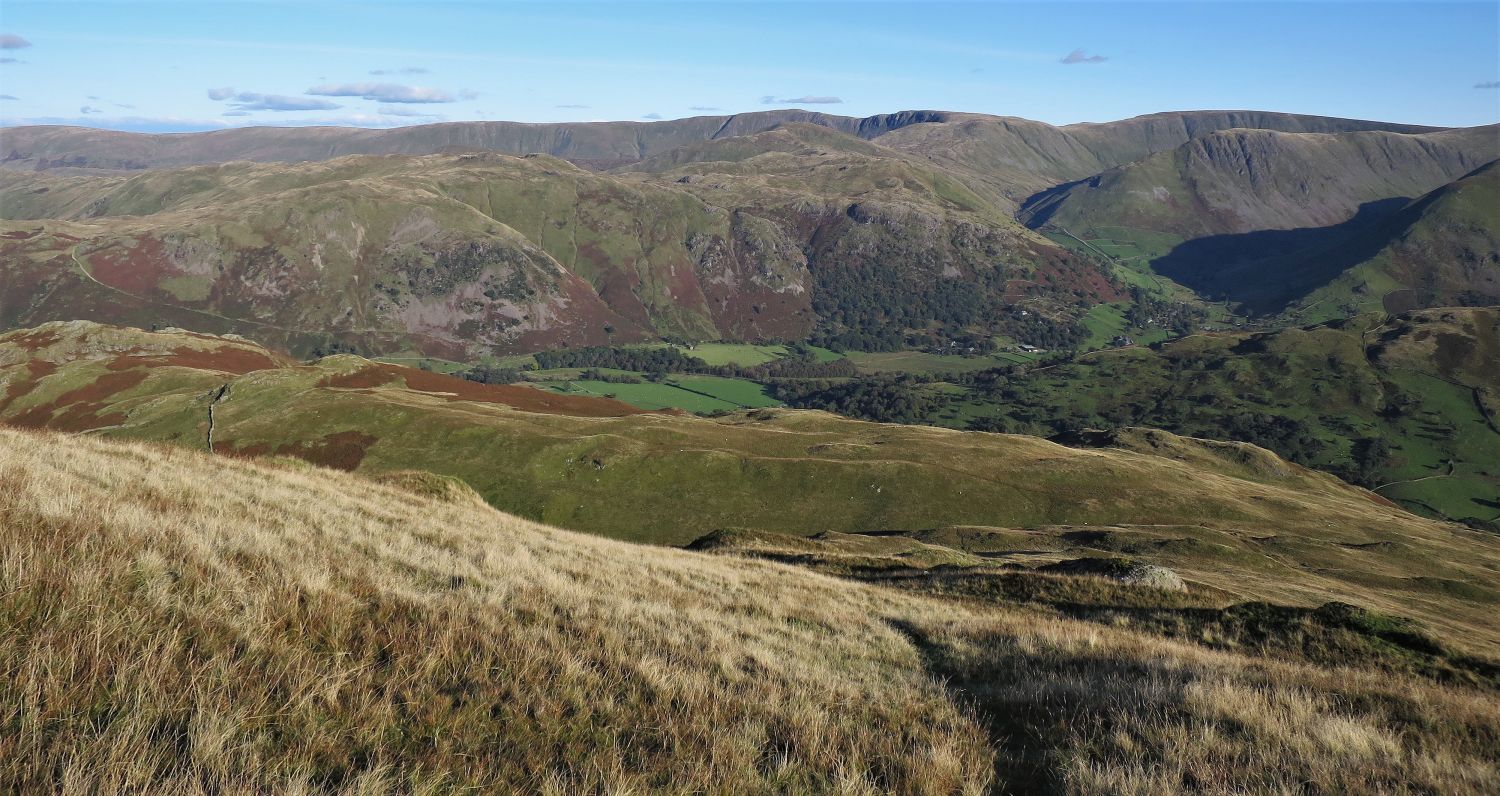 A little further down the slope, the long ridge leading to Arnison Crag comes into view; this is our last Wainwright summit before a short walk along the valley of Patterdale. 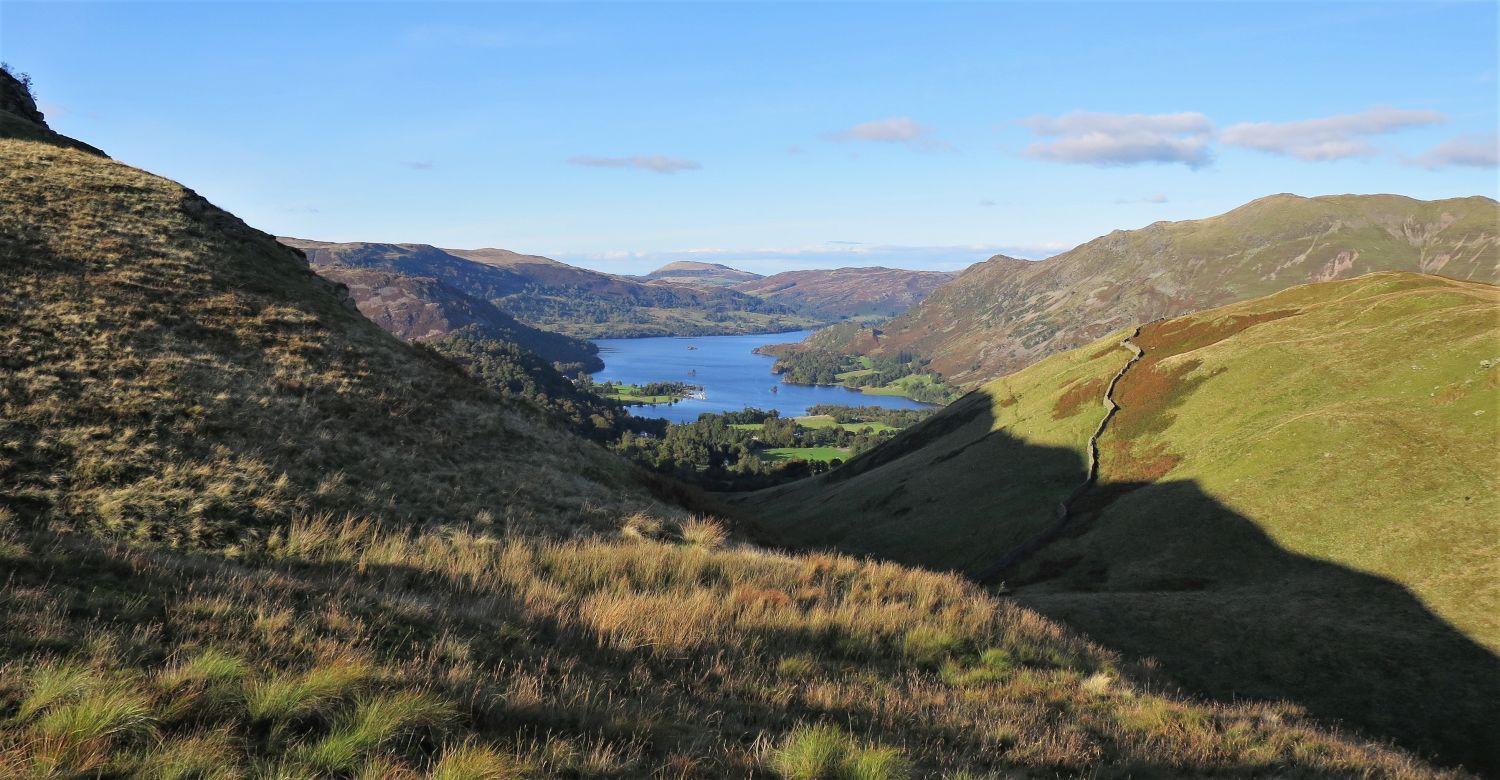 Place Fell from the ridge leading to Arnison Crag

Ullswater from the summit of Arnison Crag 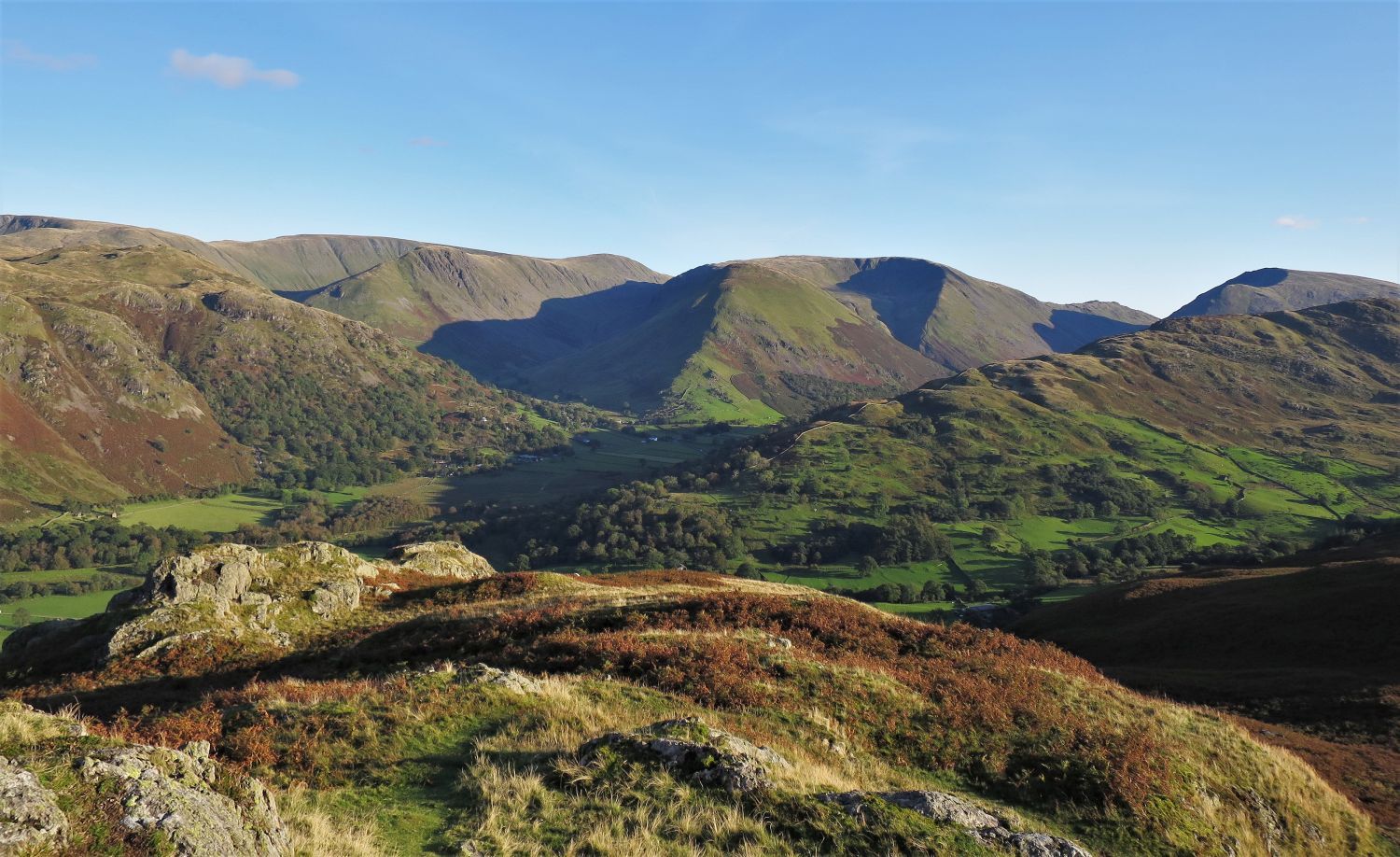 Looking south-east to upper Patterdale and the hamlet of Hartsop

Arnison Crag is surrounded by higher fells, and the view is very restricted. A feature is the fine grouping of the hills above the pastures of Hartsop.” Arnison Crag 4
AW 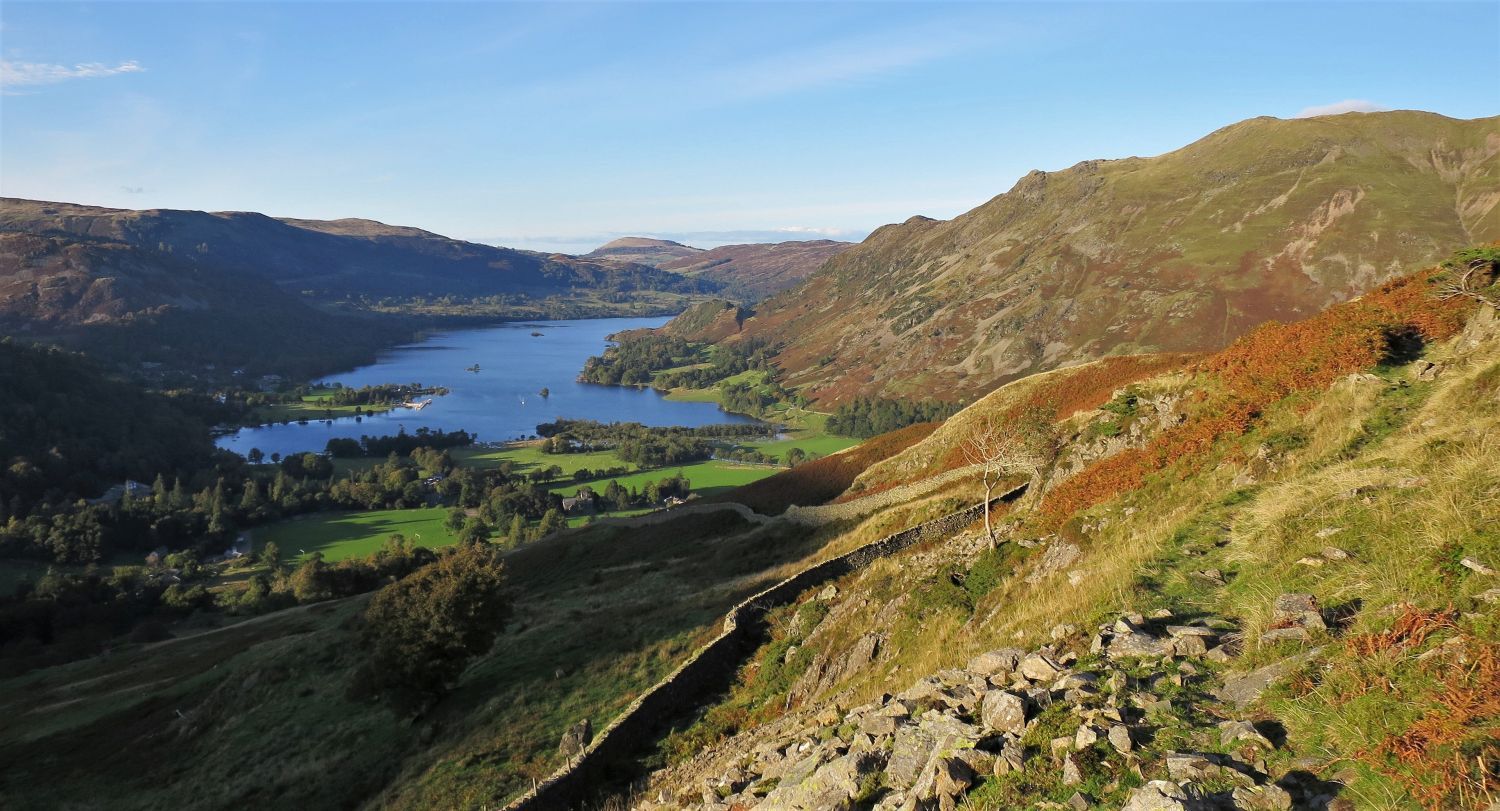 Ullswater from the edge of Glenamara Park

A wall that surrounds Glenamara Park is now followed down to the village of Patterdale. 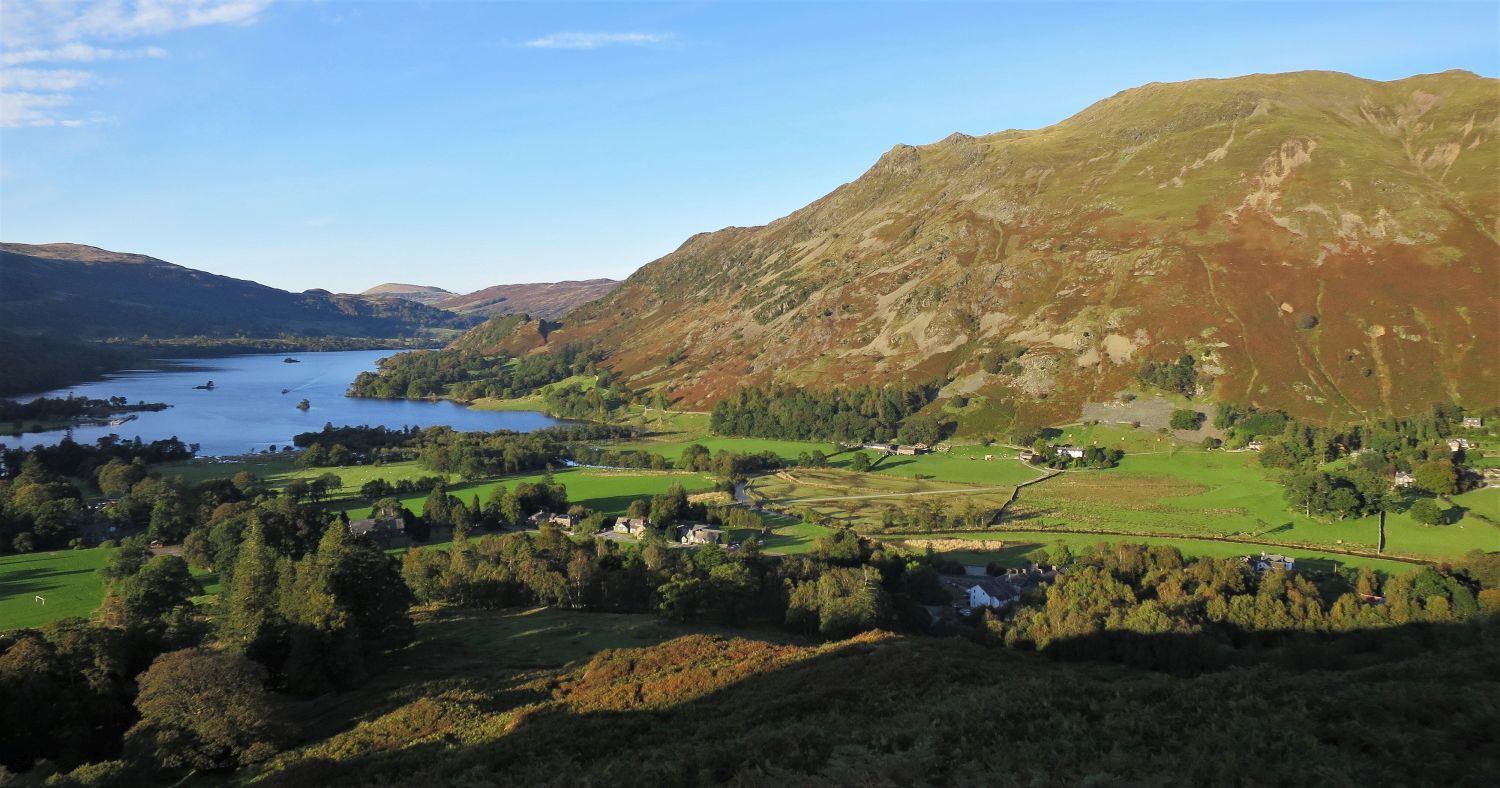 Ullswater and Place Fell over the village of Patterdale 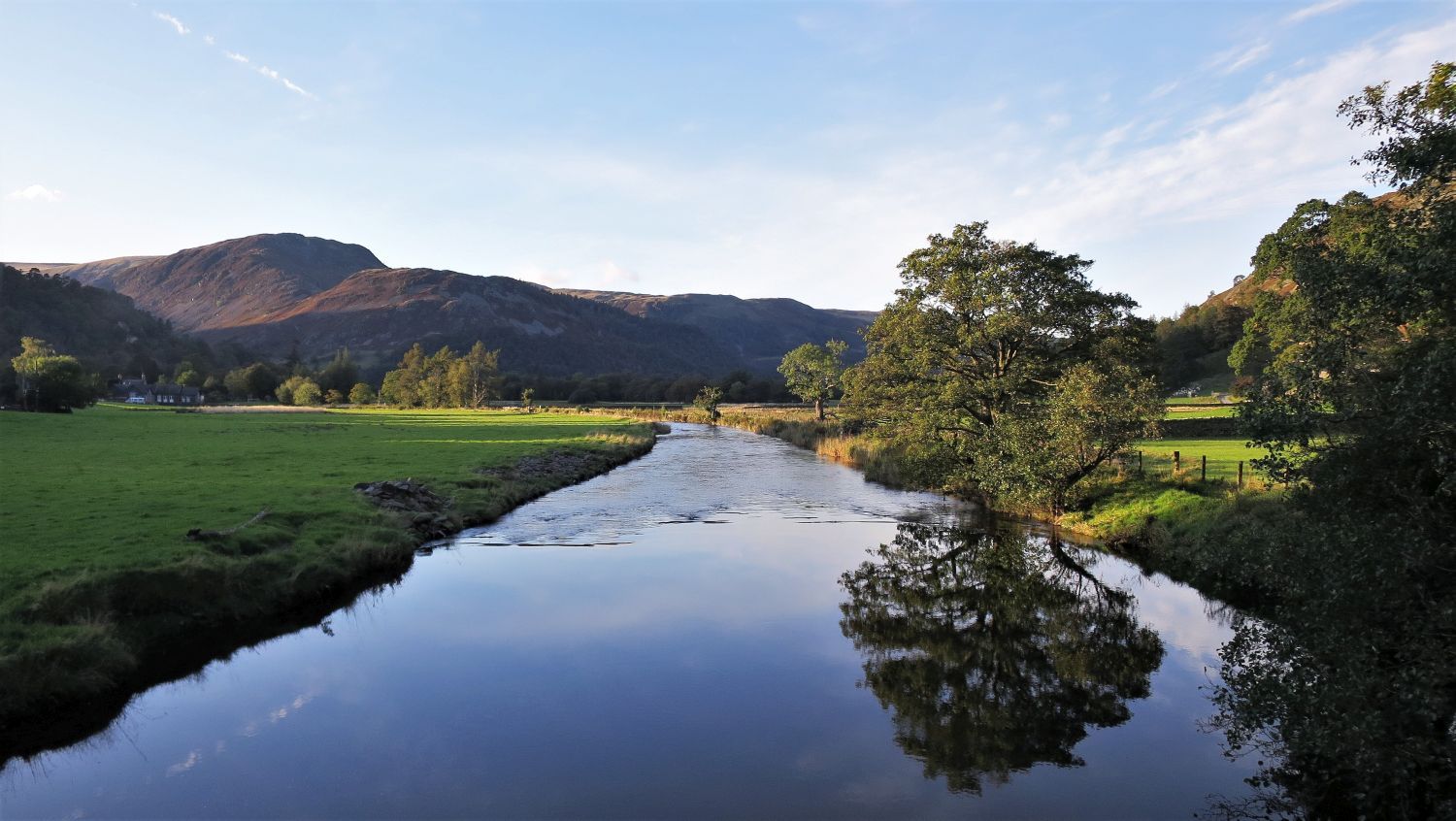 After a little refreshment in the White Lion, in the village of Patterdale, our day is finished by a lovely evening walk along the valley through Rooking and Crookabeck.

Boredale Hause from the approach to the hamlet of Rooking

Thanks for visiting.
Richard Jennings