The Wilkinson and Ashworth Tragedy at Hawes Water 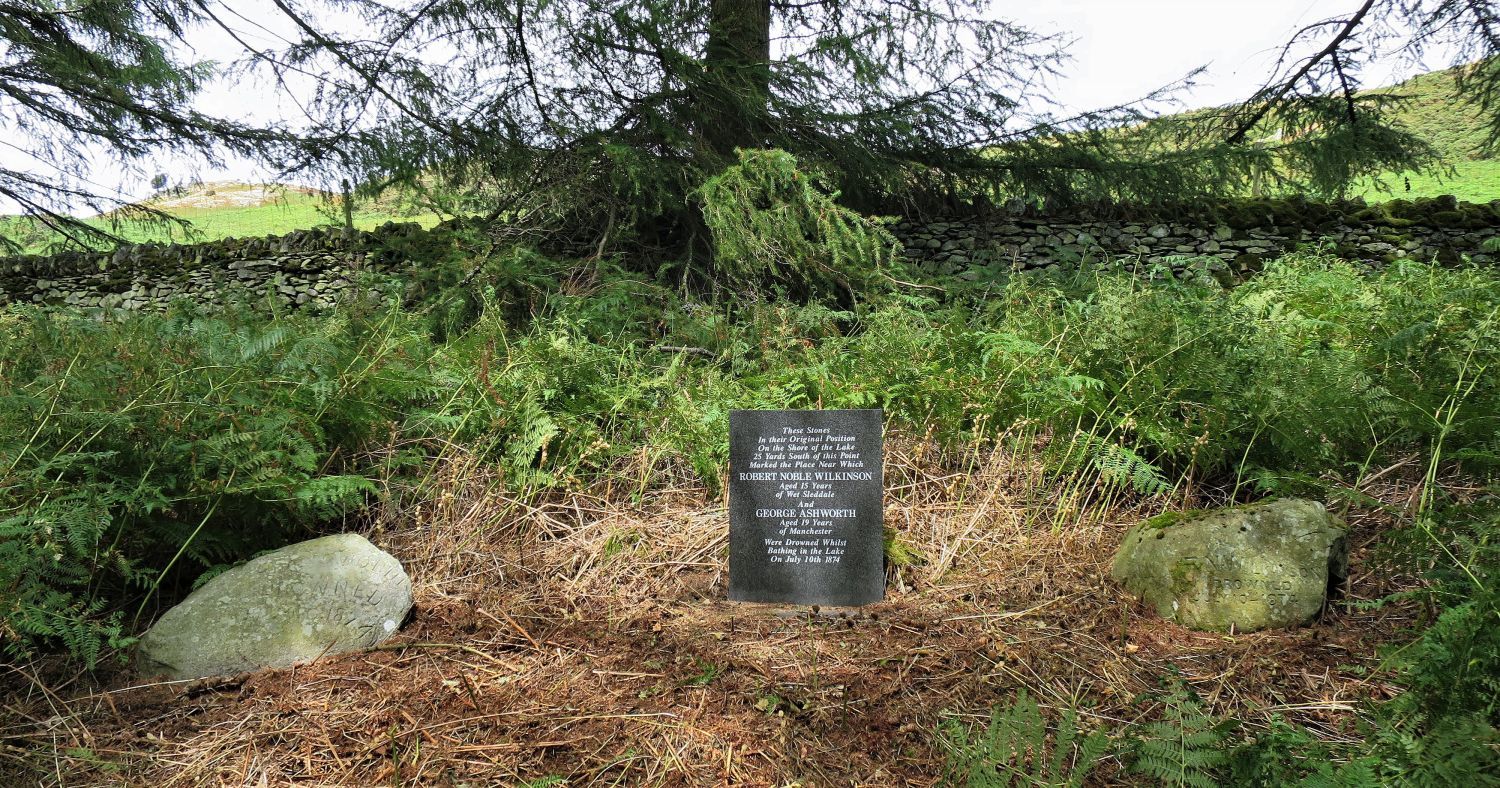 A very sad story about two young boys who tragically drowned while bathing in a lake, and the tale of two valleys submerged to quench the first of a growing population.

While researching the history and families of Wet Sleddale, I came across an article written in 2012 by Helen Ashworth, who is the 2nd great-niece of the two boys who had drowned in Hawes Water in 1874. Helen was very keen that the boys were no forgotten, so she kindly allowed me to use the information for my first ‘local history’ story. After much correspondence and ground work, the events of that sad day and the following years came to light.

On the evening of Friday 10th July 1874, close relatives Robert Noble Wilkinson aged 15, and George Ashworth aged 18, were tragically drowned while bathing at Low Water at the north-east end of the valley of Mardale and Hawes Water (now Haweswater Reservoir). Robert, from Beckside Farm in Wet Sleddale, and George who had travelled with his mother from Manchester, were staying at the farm of Robert’s uncle at Little Water. The home of William and Ann Noble, Littlewater Farm was only one mile walking distance from the location of the drownings. 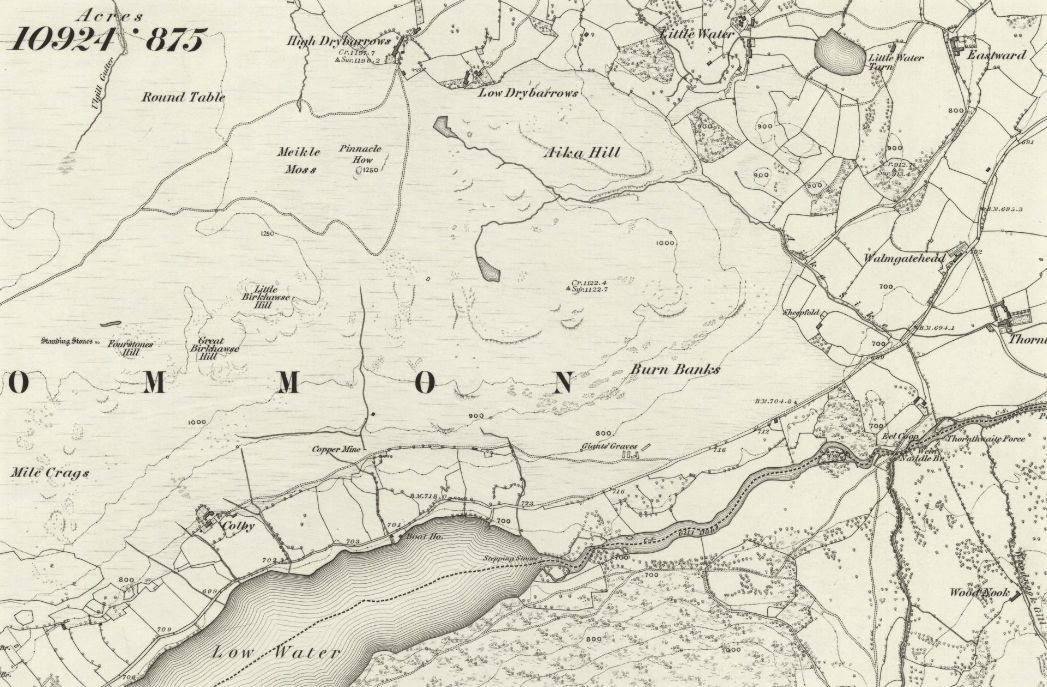 It appears from the evidence from Ann Noble, that the boys decided to go for a bathe at the foot of Hawes Water about half-past five Friday evening. Shortly after, Robert had returned back to the farm for a towel, before heading back to the lake. George’s mother, Elizabeth Ashworth, was later becoming uneasy about their lengthened absence, so both Ann and Elizabeth went to look for the boys at about half-past eight. With no sign of them, Ann and Elizabeth returned back to the farm. At about half-past ten, William Noble, and Thomas Noble of nearby Eastward Farm, went in search of the boys. Near to the foot of the lake, they found the clothes of both boys which had been placed on two boulders near to the water’s edge. 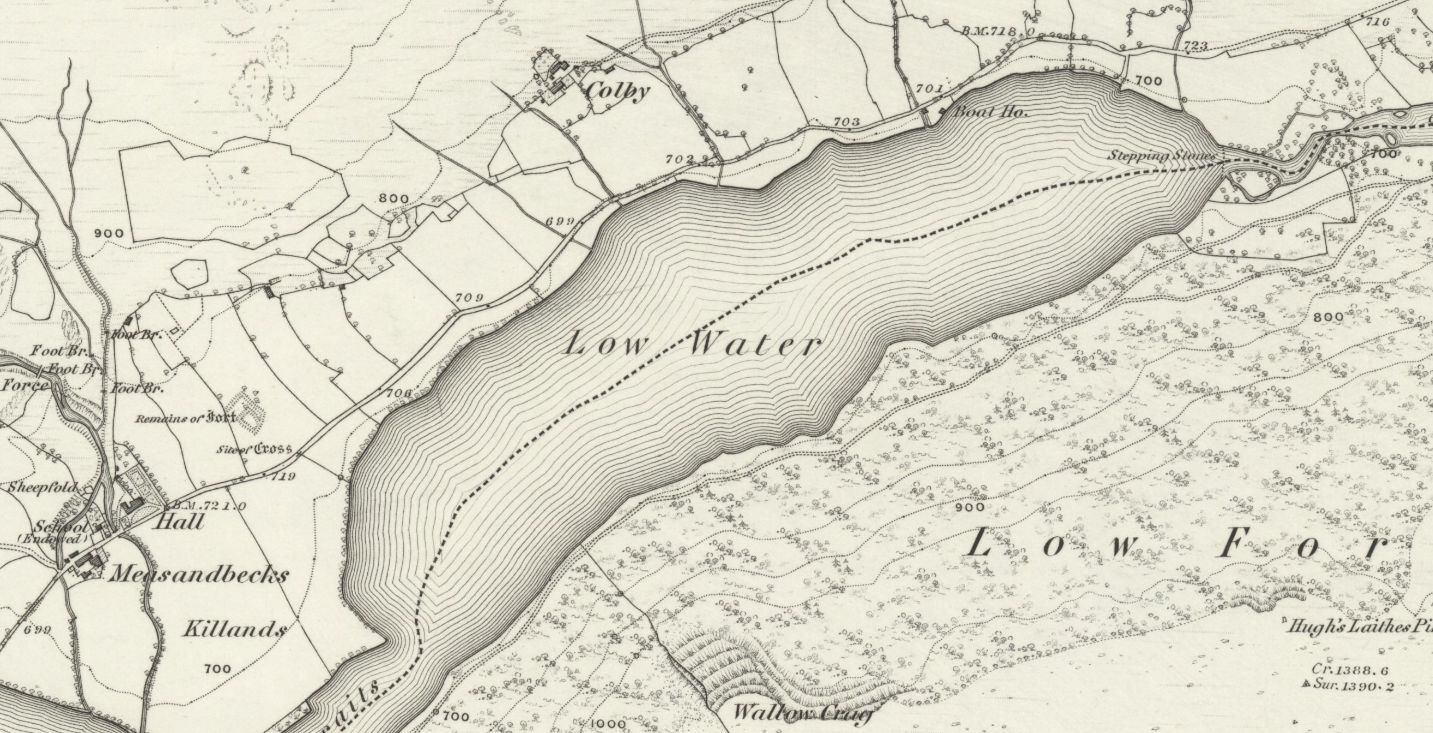 Locations of Measand and the boat house (Ordnance Survey 1860)

With the assistance of Thomas Kitching, of nearby Measand, they got a boat and went out on the lake with lights and boat hooks. They soon found the body of George Ashworth about 30 yards from the shore, in about six feet of water, then shortly after, they found the body of Robert Noble Wilkinson, who was only 10 yards away from George in about nine feet of water.

It was stated at the inquest that George Ashworth had been taking swimming lessons in Manchester, and that in all probability one boy must have tried to rescue the other after getting into difficulty. The jury returned a verdict of “accidentally drowned while bathing”.

“The deceased were two fine young men, and their untimely end has called forth the greatest sympathy for their parents and friends, who are thus suddenly plunged into the deepest distress. Wilkinson’s family are numerously connected to the parish. It is but a few months since Mr Wilkinson, the elder, died. We may add that Wilkinson was a very promising youth, having progressed rapidly with his studies at Beetham School. In the returns of the Diocesan Society his name appears in the first division, first class for religious knowledge.”
Kendal Mercury – Saturday 18th July 1874

The last fatal accident in Hawes Water before the tragedy of 1874, was almost 150 years previously. On Saturday 17th December 1726, a young man named Hughes, from London, drowned after falling through the ice that covered the lake. His body was interred nearby at Bampton on Tuesday 20th December. 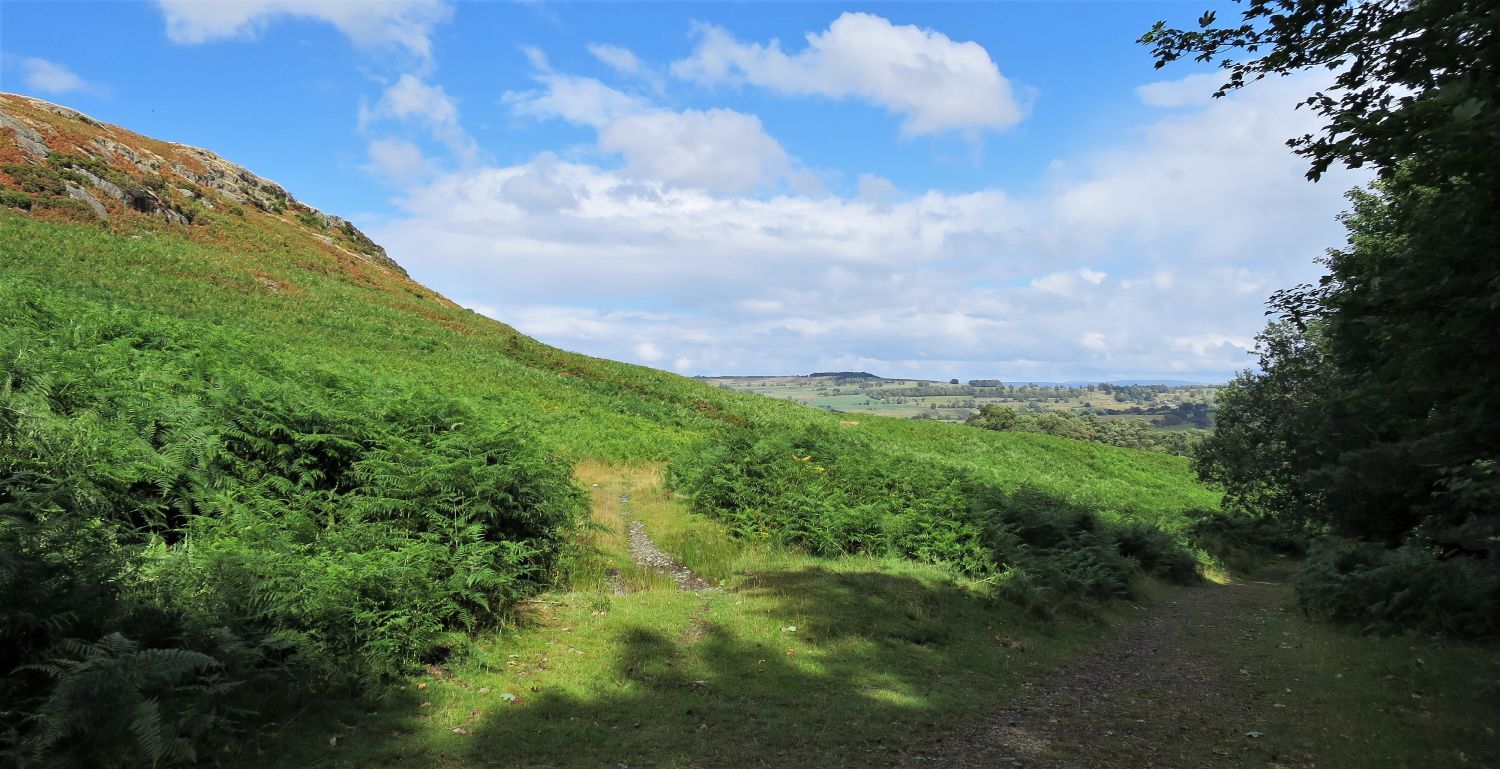 This track that leaves the north shore bridleway and then skirts around the eastern slope of Burn Banks, is in all probability the route that Robert had taken to Littlewater Farm to get a towel. It is an old track, direct and avoids the height of Burn Banks (seen on the left).

Little Water from the eastern slope of Burn Banks 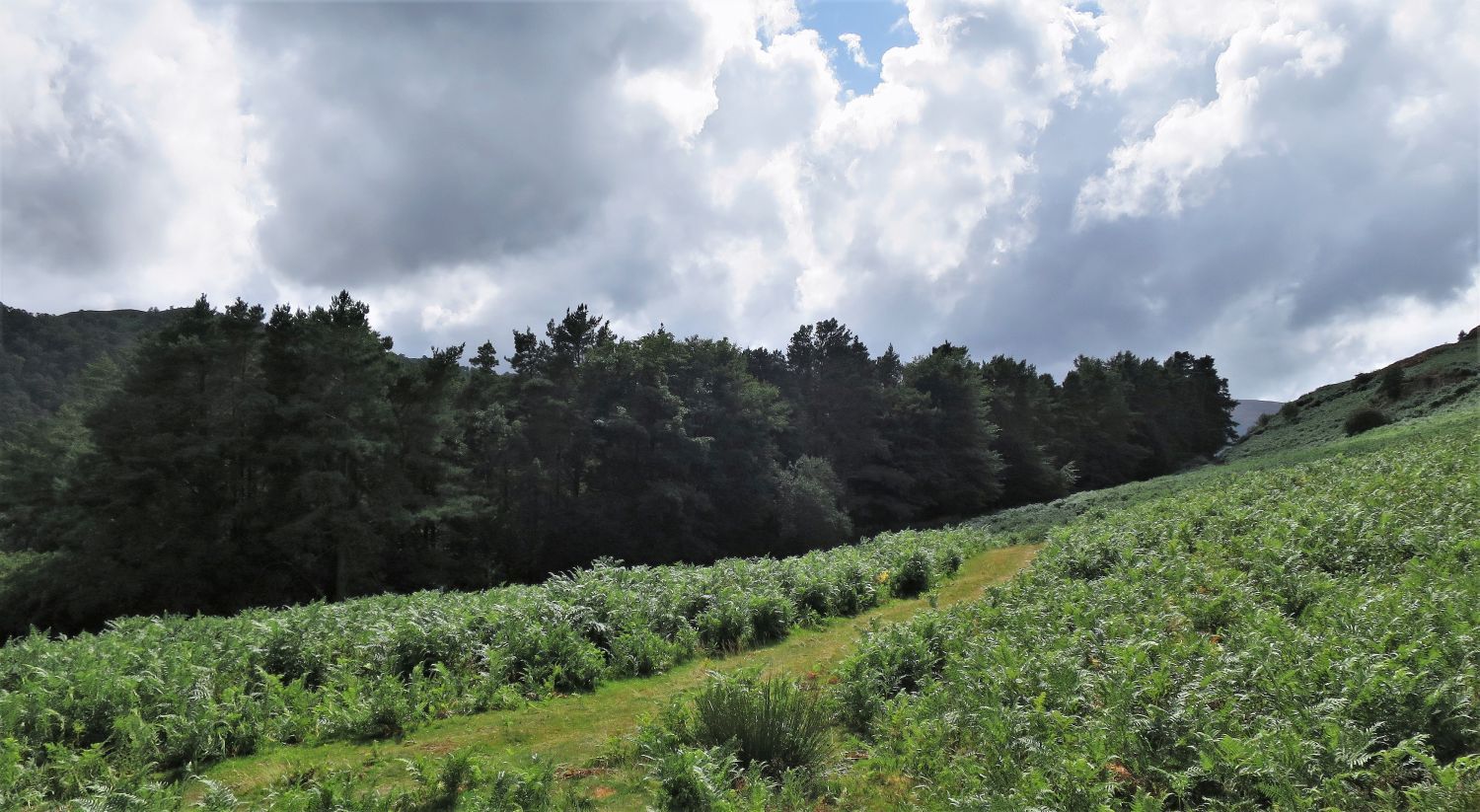 Looking back along the track towards the north shore bridleway

The boys probably approached this way when they first arrived at the lake, however, the tree-line wasn’t here in 1874 so they would’ve had a great view of Mardale and the two lakes of Low Water and High Water.

Robert and George were buried at St Michael’s, Shap on 14th July. On a personal note, I think it’s quite moving that the boys were buried together. 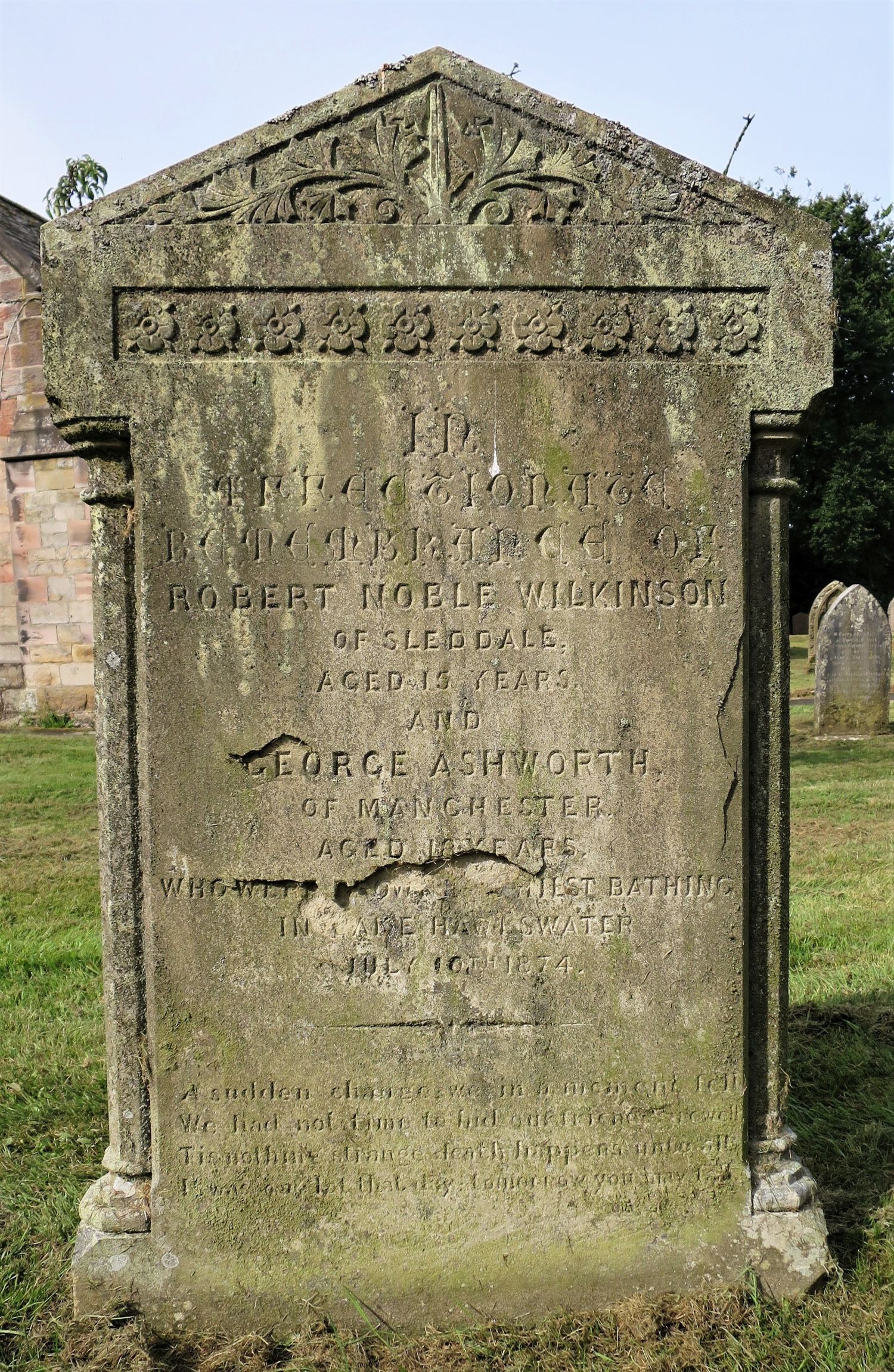 The headstone of Robert and George at St Michael’s Church, Shap

A sudden change we in a moment fell,
We had not time to bid our friends farewell.
Tis nothing strange death happens unto all,
It was our lot that day; tomorrow you may fall.

At some point after the burial of Robert and George, the boulders that the boys had placed their clothes on were engraved and left in their original positions at the water’s edge. I’ve no information of who engraved them, or exactly when it happened, but the boulders were left undisturbed for many years. 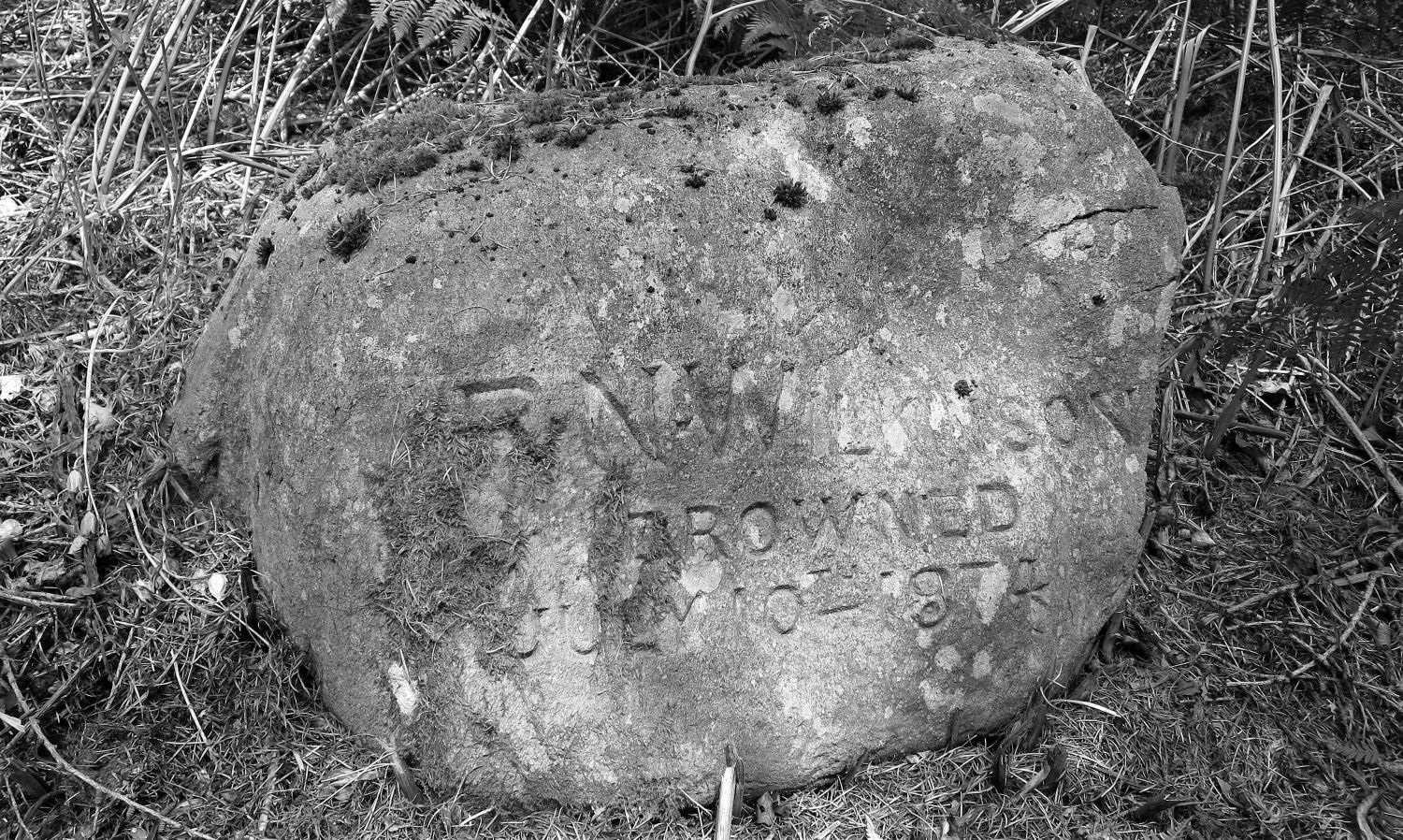 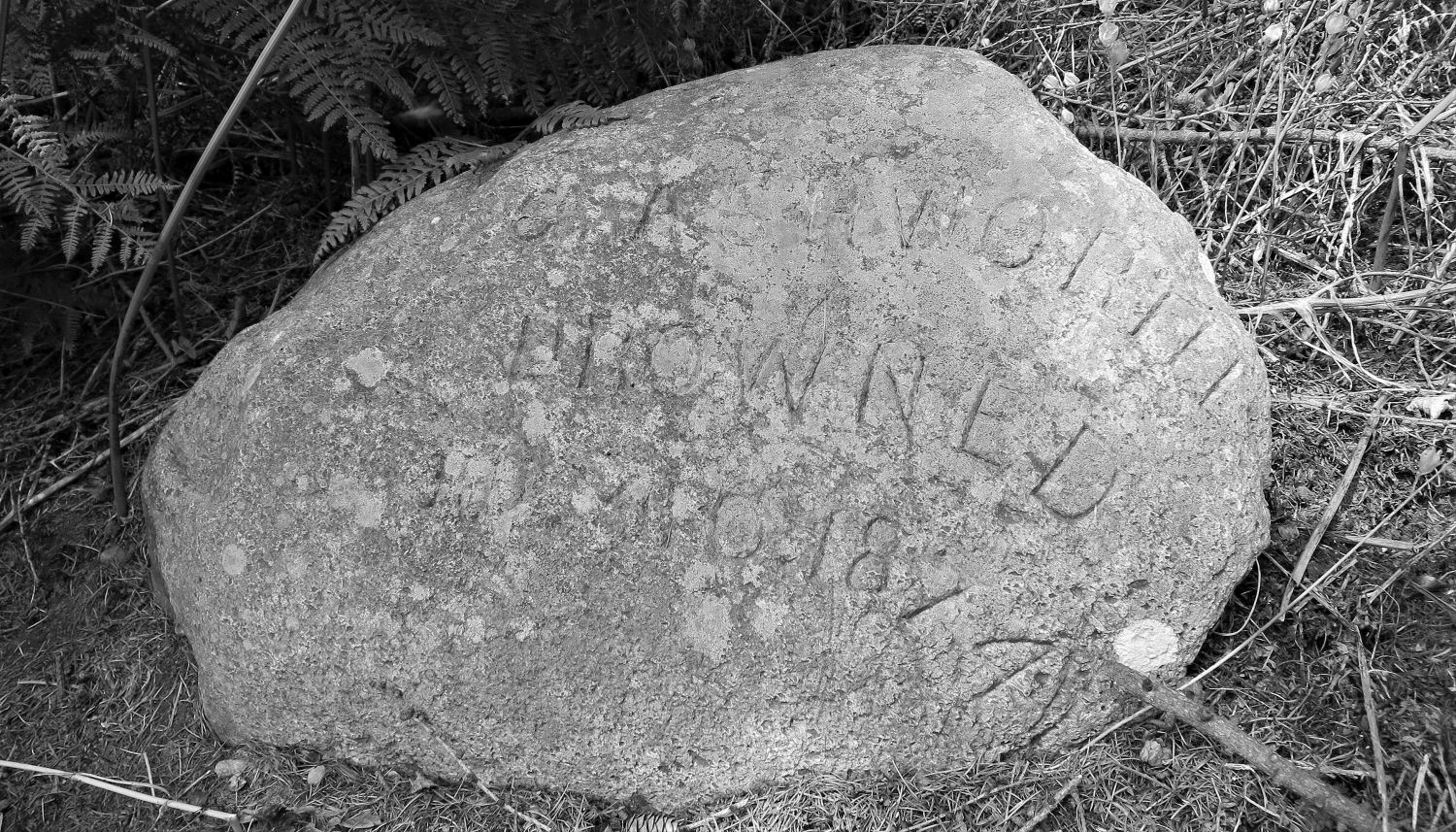 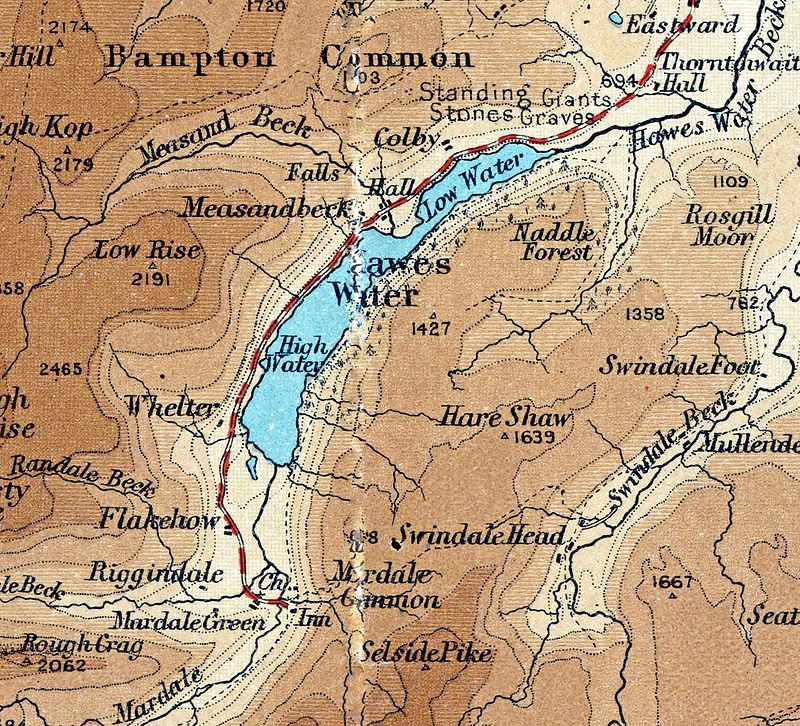 A 1924 map of Mardale and Hawes Water

The tombolo strip of land of Measand divided the lake almost in two. The upper and lower reaches of the lake were known as High Water and Low Water. Controversially, work started in 1930 to raise the height of the lake to supply drinking water to the city of Manchester.

Much work was needed in preparation for the flooding of Mardale, including demolition of farm buildings, the Dun Bull Inn and the church to give a few examples; stones and windows from the church were re-used to build the ‘draw off tower’ which is situated along the eastern shore of the reservoir, and all the bodies in the churchyard were exhumed and re-buried at the upper cemetery of St Michael’s, Shap. Another sad part to this tale is that the engraved memorial boulders of Robert and George, had to be moved to higher ground to avoid being victims of the rising water level. Even though a great gesture, it is believed it was a PR exercise by Manchester Corporation Waterworks Commitee, partly because of the huge uproar over the dam and subsequent flooding of Mardale.

A memorial slab was placed between the two engraved boulders with an inscription: 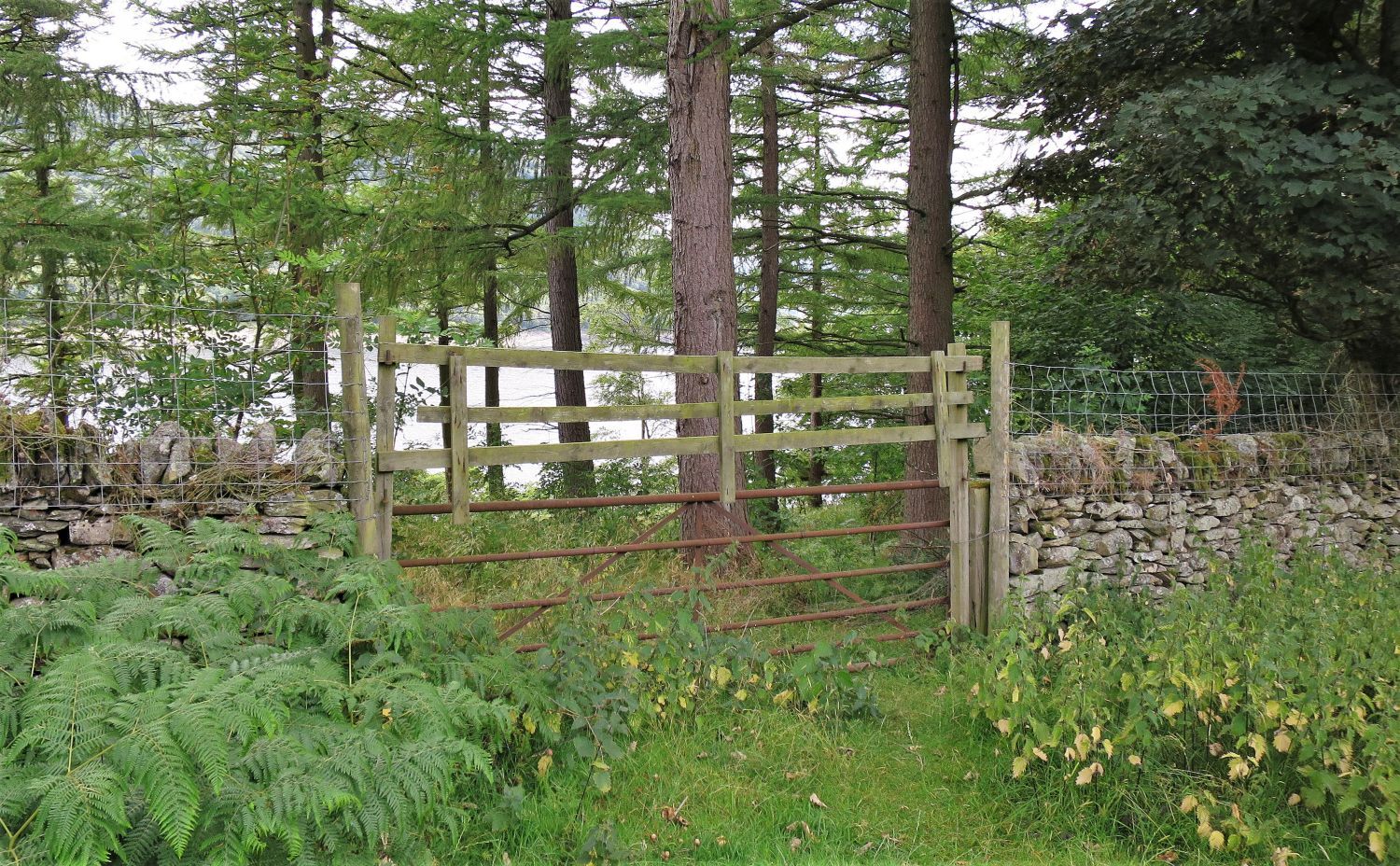 Gate leading to the memorial

Just a short walk from the hamlet of Burnbanks, along the north shore bridleway, this gate on your left leads to the memorial. Since the creation of the reservoir, trees were planted and the area has become overgrown; during the summer months especially, the ground is dense with bracken. I wonder how many walkers pass this gate not knowing about the memorial, and the sad story attached to it? 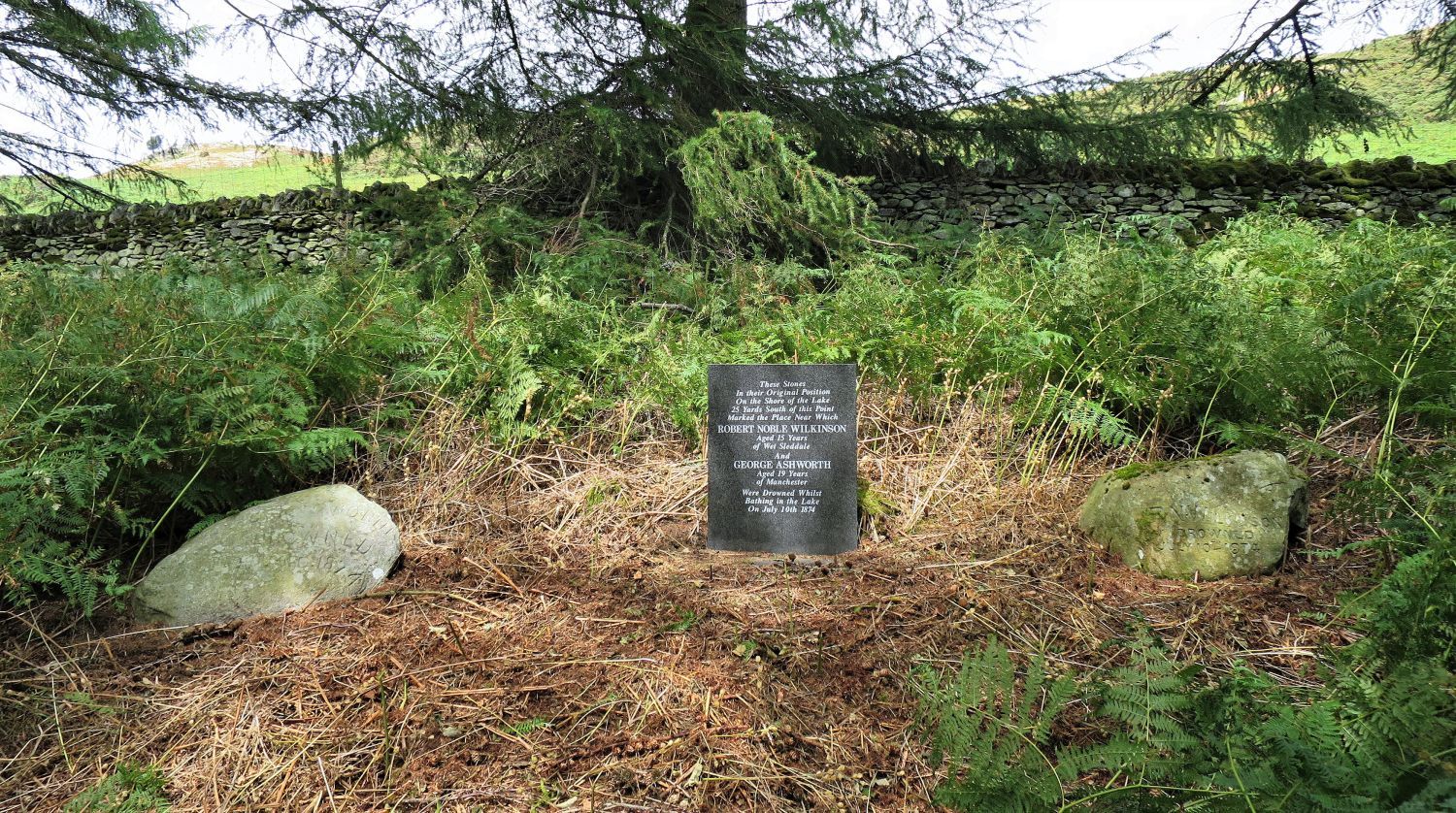 During the 1990s the memorial slab from 1937 got damaged due to being too close to the water’s edge, so a new, smaller slab was commissioned in 1997 and the engraved boulders were moved a further six yards up the slope, towards the reservoir’s boundary wall; the north shore bridleway is just on the other side of the wall. The family did ask North West Water to repair or replace the memorial slab in 1993, but it wasn’t until 1997 that a new stone was placed there. 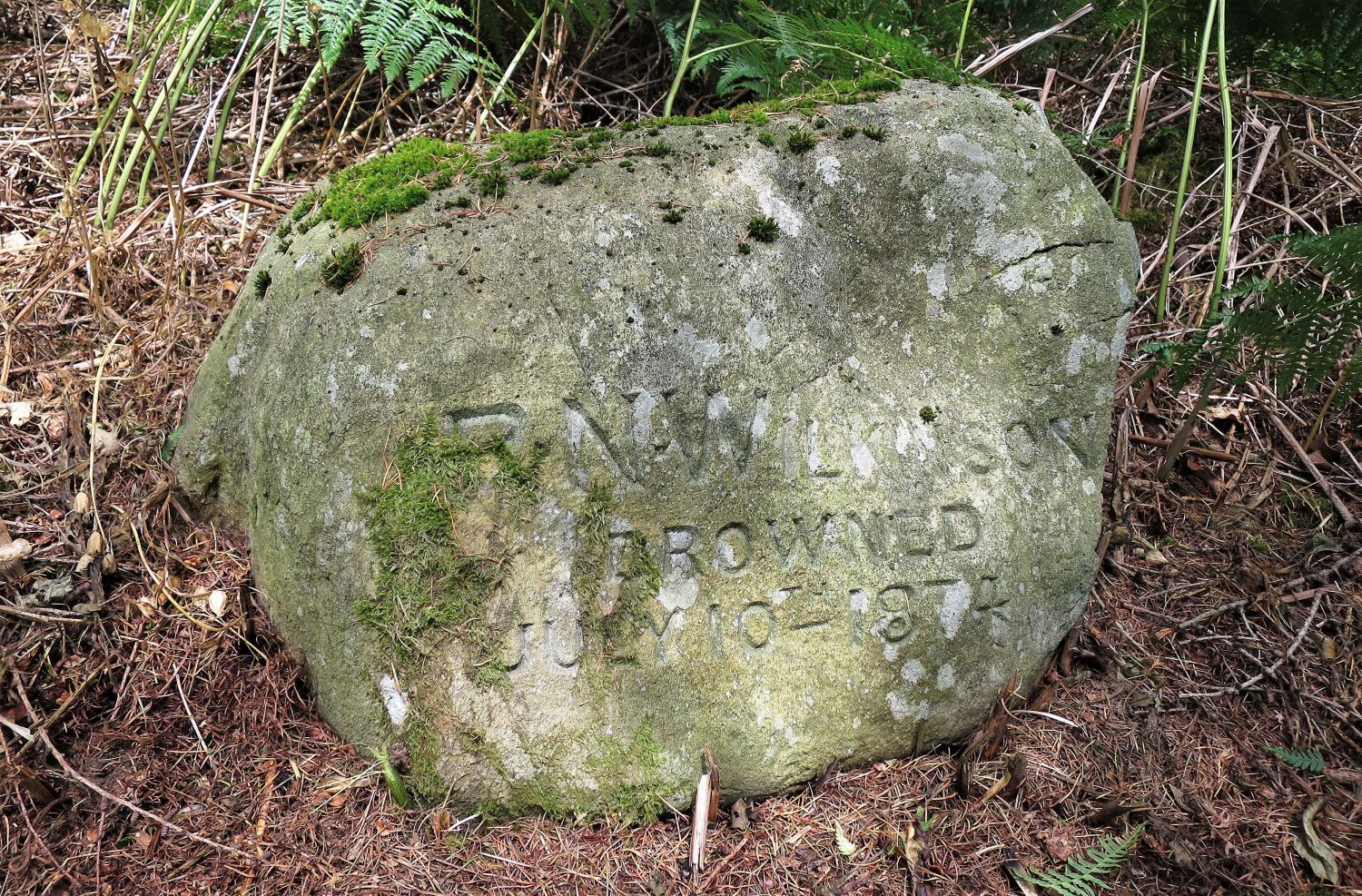 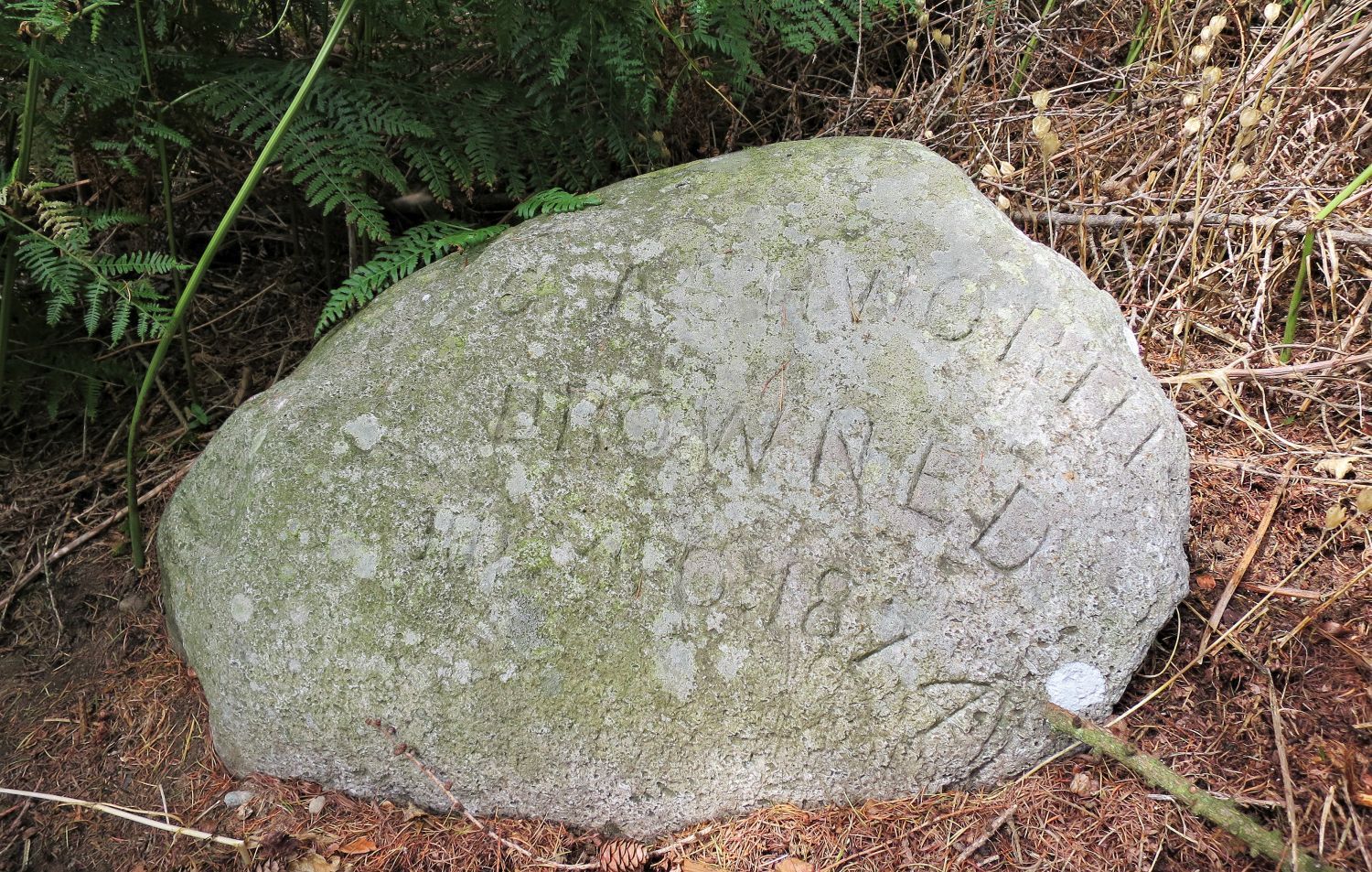 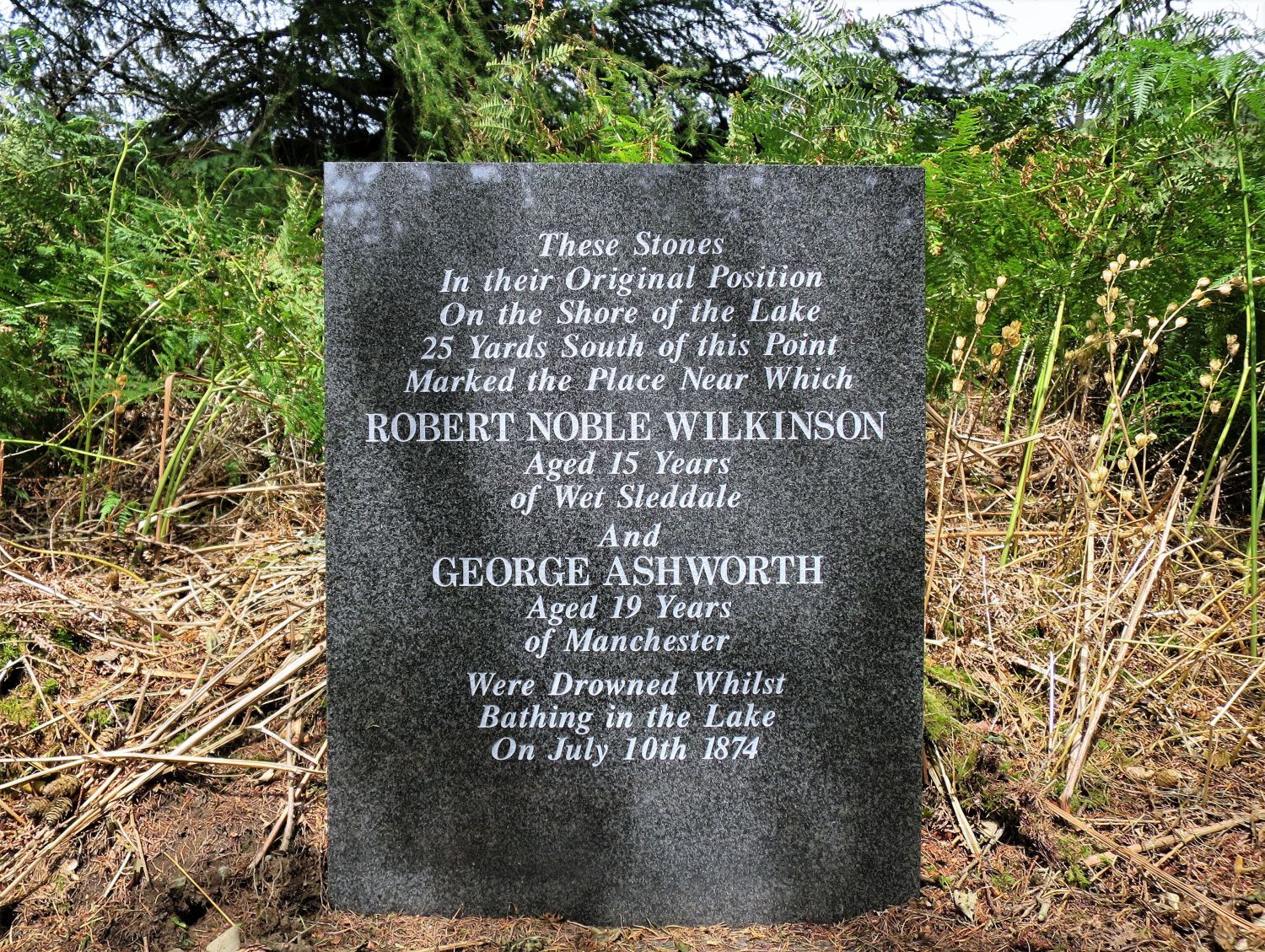 The engraved boulders have been moved twice since the 1930s, 195 yards in 1937 and 6 yards in 1997, and two memorial stones have been commissioned at different times. For some reason however, the yardage is incorrect on the most recent memorial slab. It should be 201 yards and not 25 yards, and more puzzling is that George’s age is wrong. I’ve been in contact with a family member during my research of this story, and she told me that they are going to write to United Utilities (who took over from North West Water) to see if they could get the wording corrected. 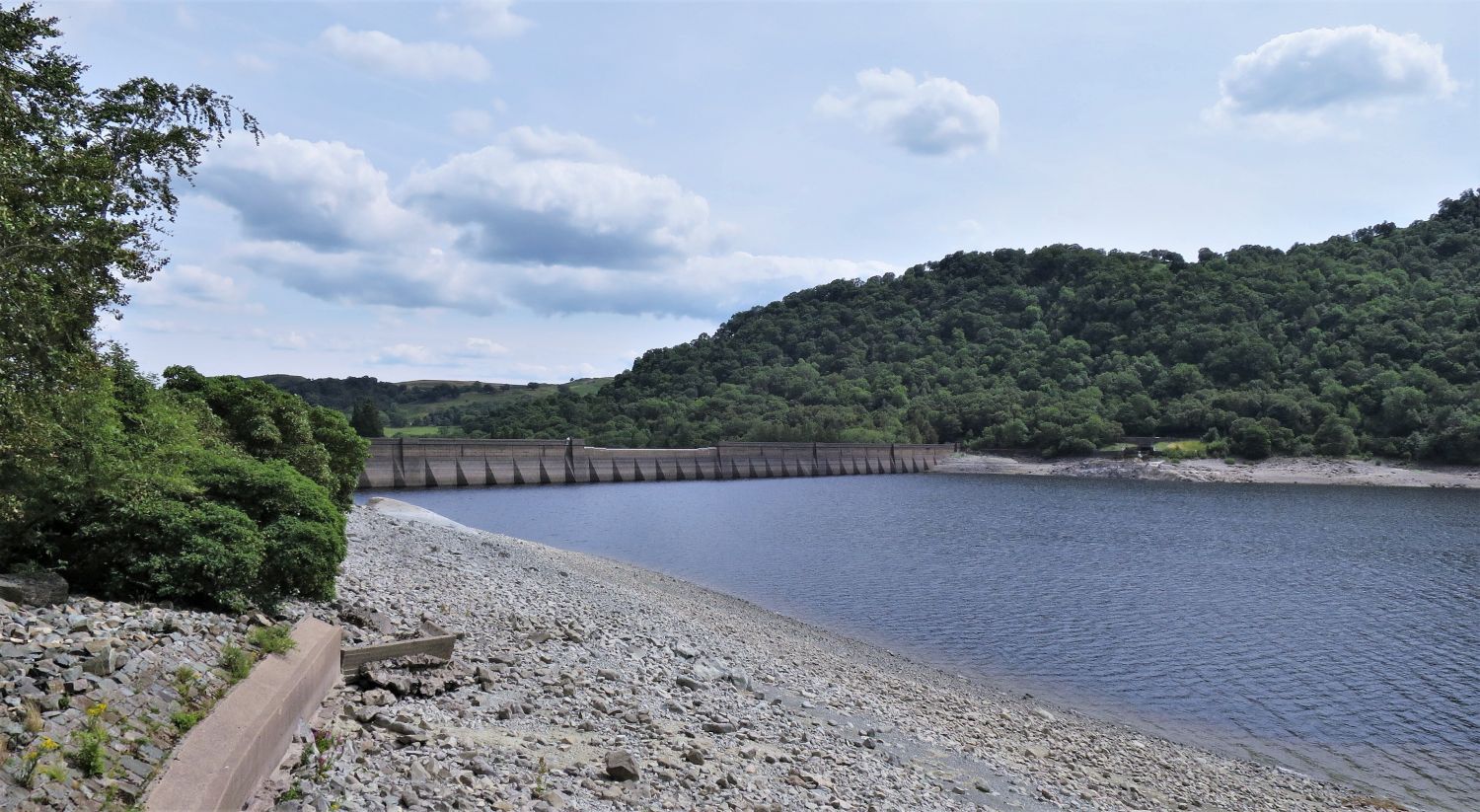 The dam at Haweswater Reservoir

At the time of construction, the dam was considered to be at the forefront of civil engineering technology because it was the world’s first hollow buttress dam. 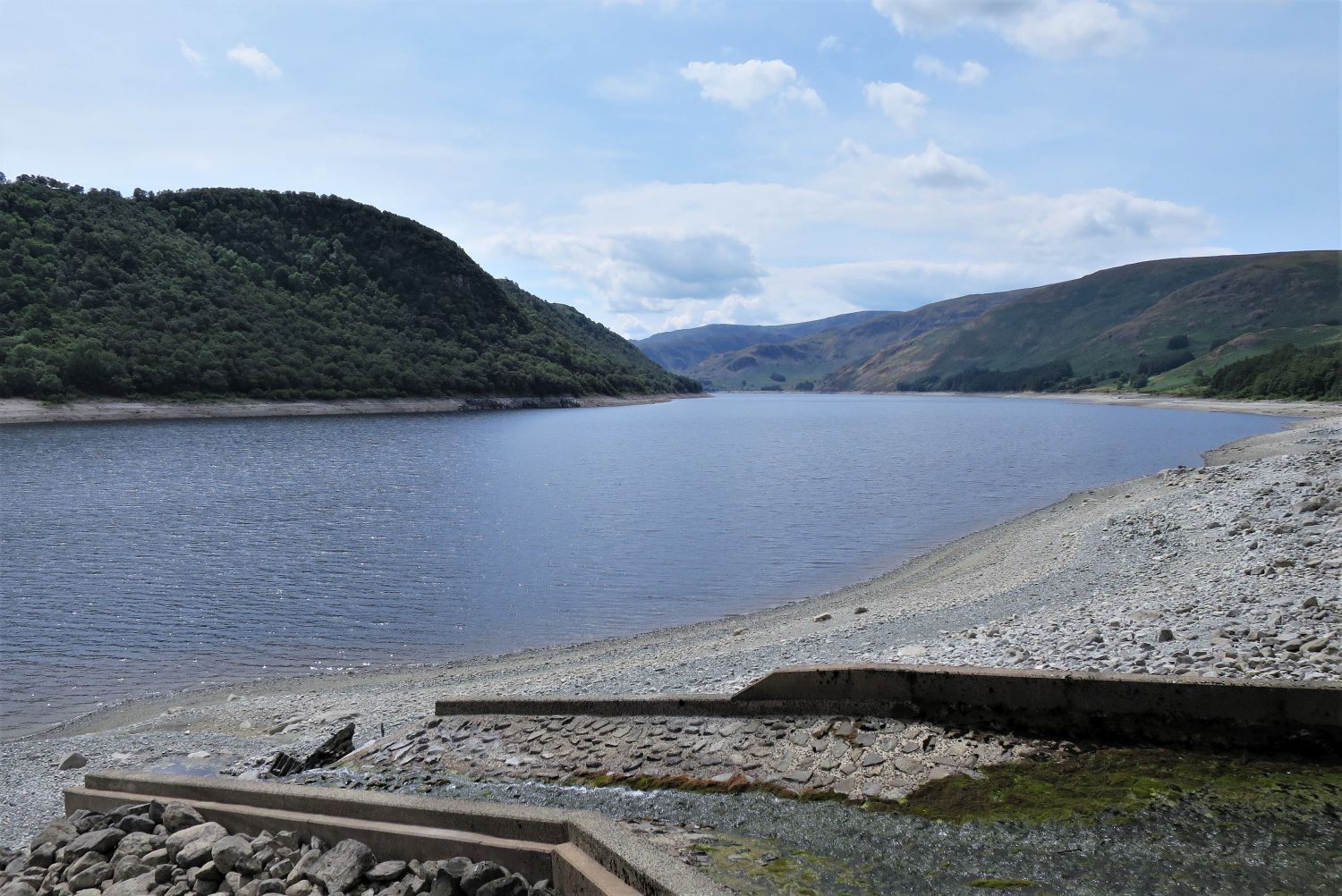 Haweswater Reservoir from near the memorial

The dam construction and the building of the new access road on the south-east shore was finally completed in 1941. By 1942 water was accumulating behind the dam and the whole length of Mardale became a lake. Ironically, at the time of taking this photo in July 2018, the water level was extremely low due to three months of dry weather; the villages of Mardale Green and Measand are once again appearing from their sunken graves.

Chapter 3
The Wilkinson and Noble families of Wet Sleddale

The following chapter contains a little background to Robert Noble Wilkinson’s family and where they lived in the small isolated community of Wet Sleddale. 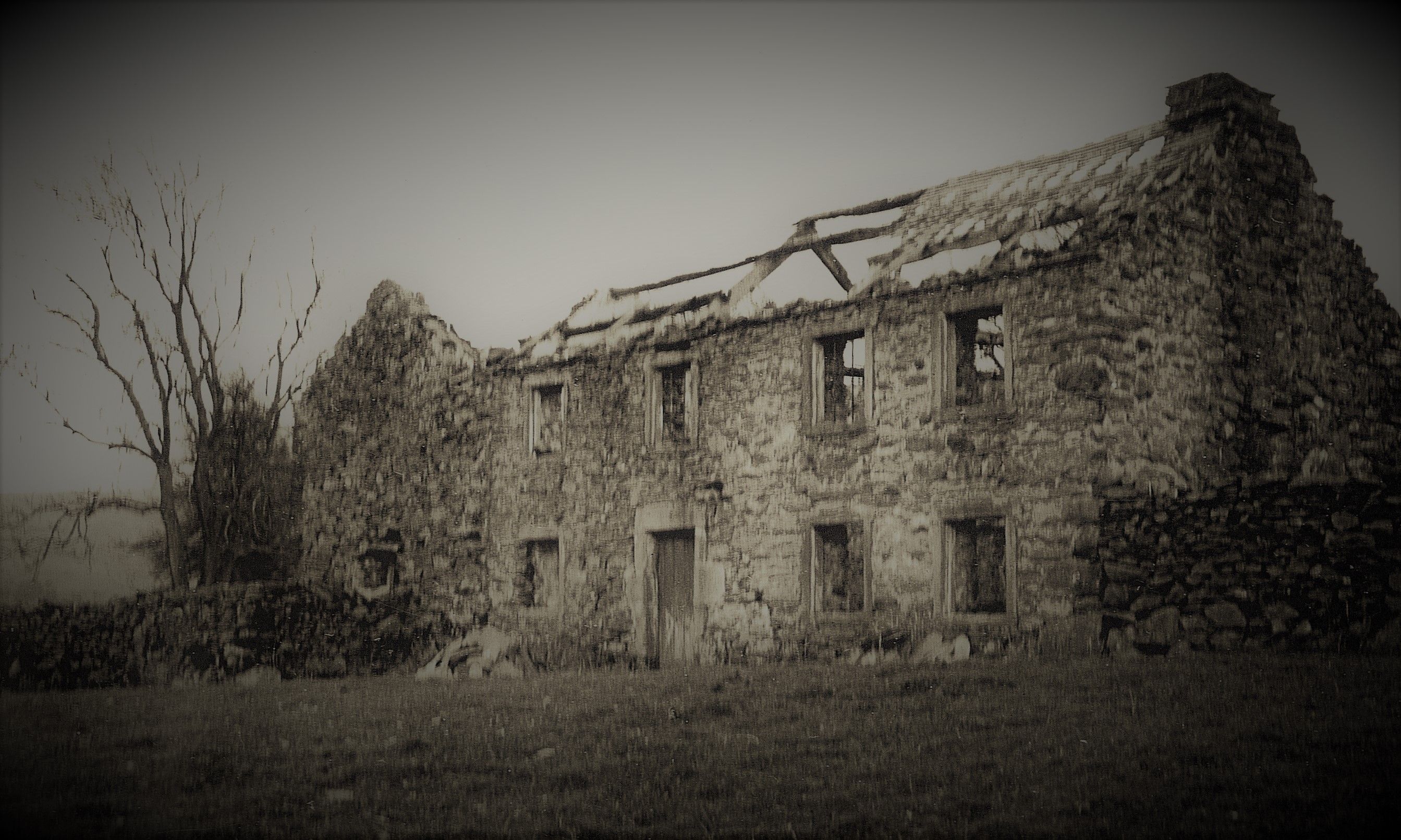 Records show that Robert Noble Wilkinson’s father, Robert Wilkinson, was living at Dale End Farm in Wet Sleddale when he married Ruth Noble in 1839, however, he was actually born in the nearby valley of Swindale. Robert was the first member of the family to own Dale End Farm, and it remained in the family until it was compulsorily purchased by Manchester Corporation before the building of Wet Sleddale Reservoir. At some point between 1851 and 1861, the Wilkinsons moved to Beckside Farm which was also located in Wet Sleddale. 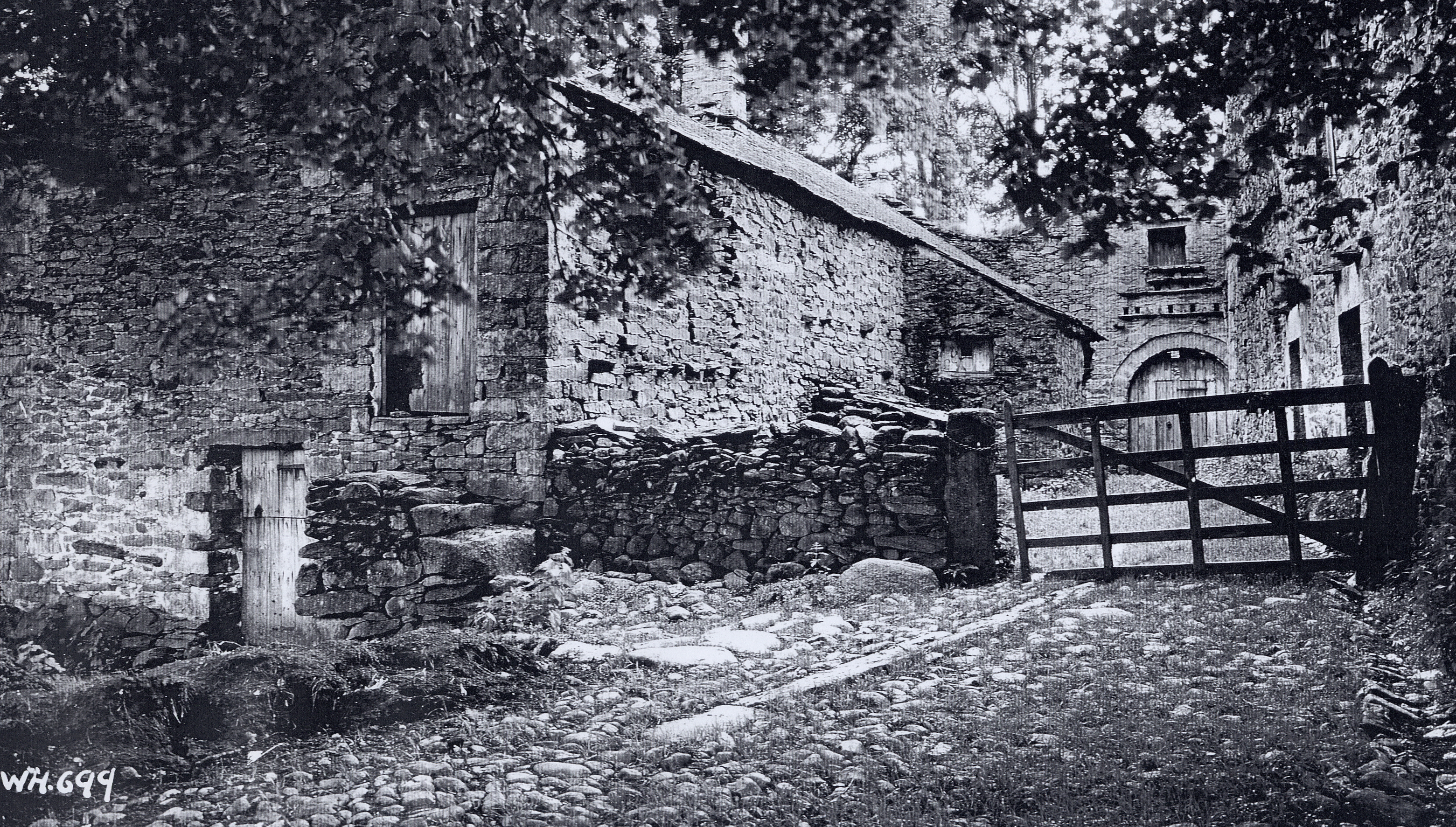 The birth place of Ruth Noble, The How (The Howe)

The Shap Registers suggest that The How was in existence from at least 1668 when it was the home of the long established Noble family. It appears from the records to have been unoccupied from the 1880s until it was demolished in 1962 when the reservoir was built. 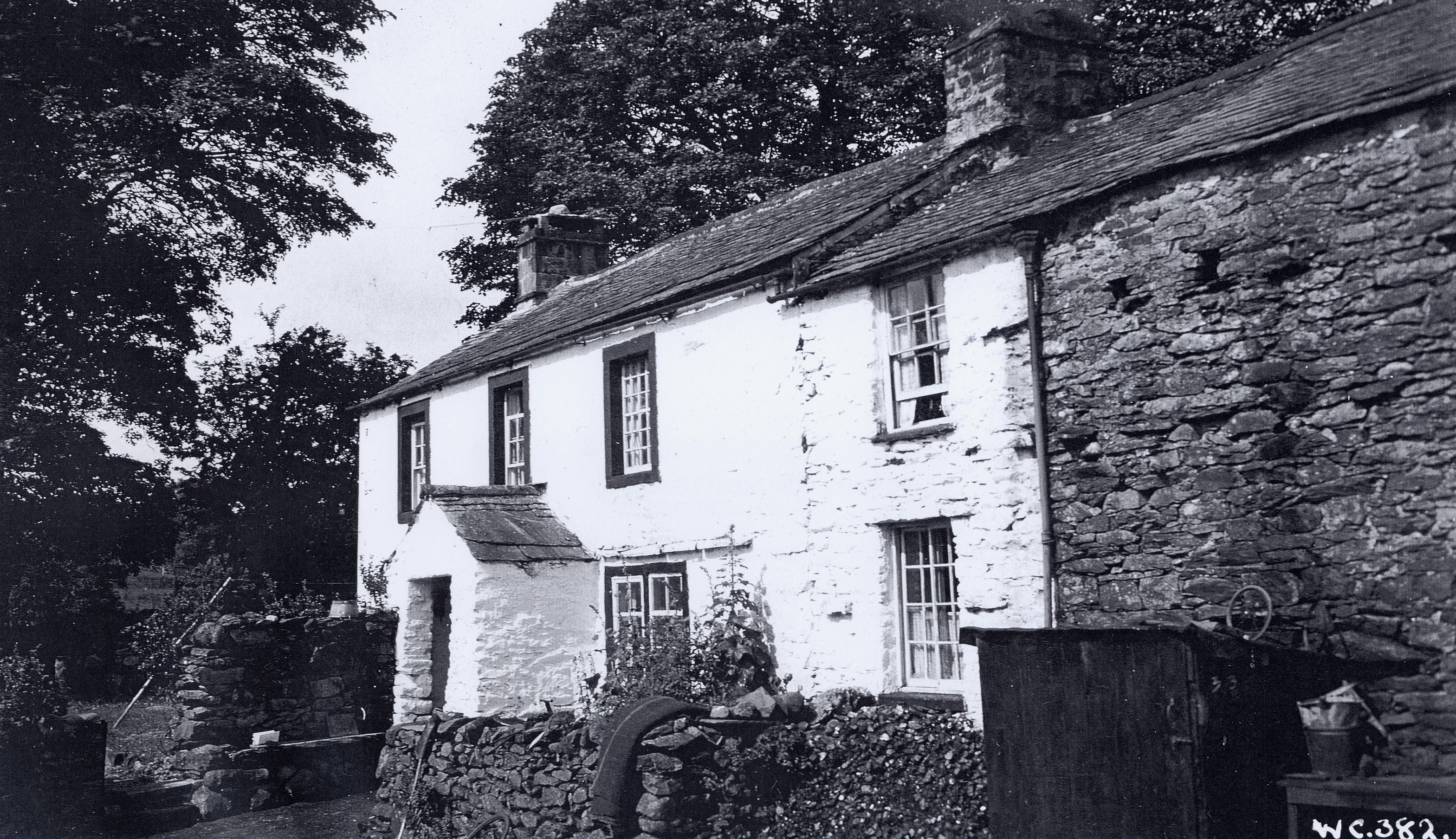 After the death of Robert Wilkinson in 1873, who was the head of the family at Beckside Farm, his wife Ruth was left with nine children. Sadly, and only seven months later, the family grieved the loss of the youngest child Robert Noble Wilkinson. Nine years later, at the age of 43, the oldest sibling Catherine died of Bronchopneumonia. 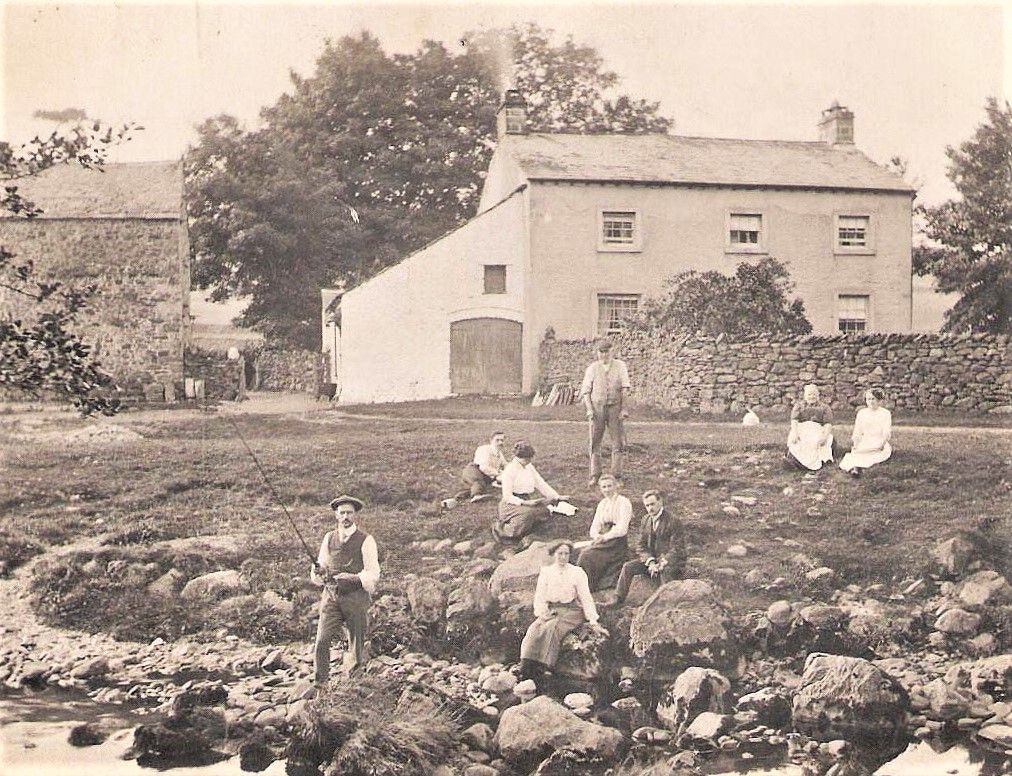 The man standing at the back is believed to be John Wilkinson, who was the eldest son of Robert and Ruth, and brother of Robert Noble Wilkinson; John became the head of the family at Beckside Farm after the death of his mother in 1902. The lady sat to his right and slightly behind, is thought to be the housekeeper Jane Watson from Cockermouth, and the lady sat directly in front of him, is possibly his daughter Agnus Richardson Wilkinson. 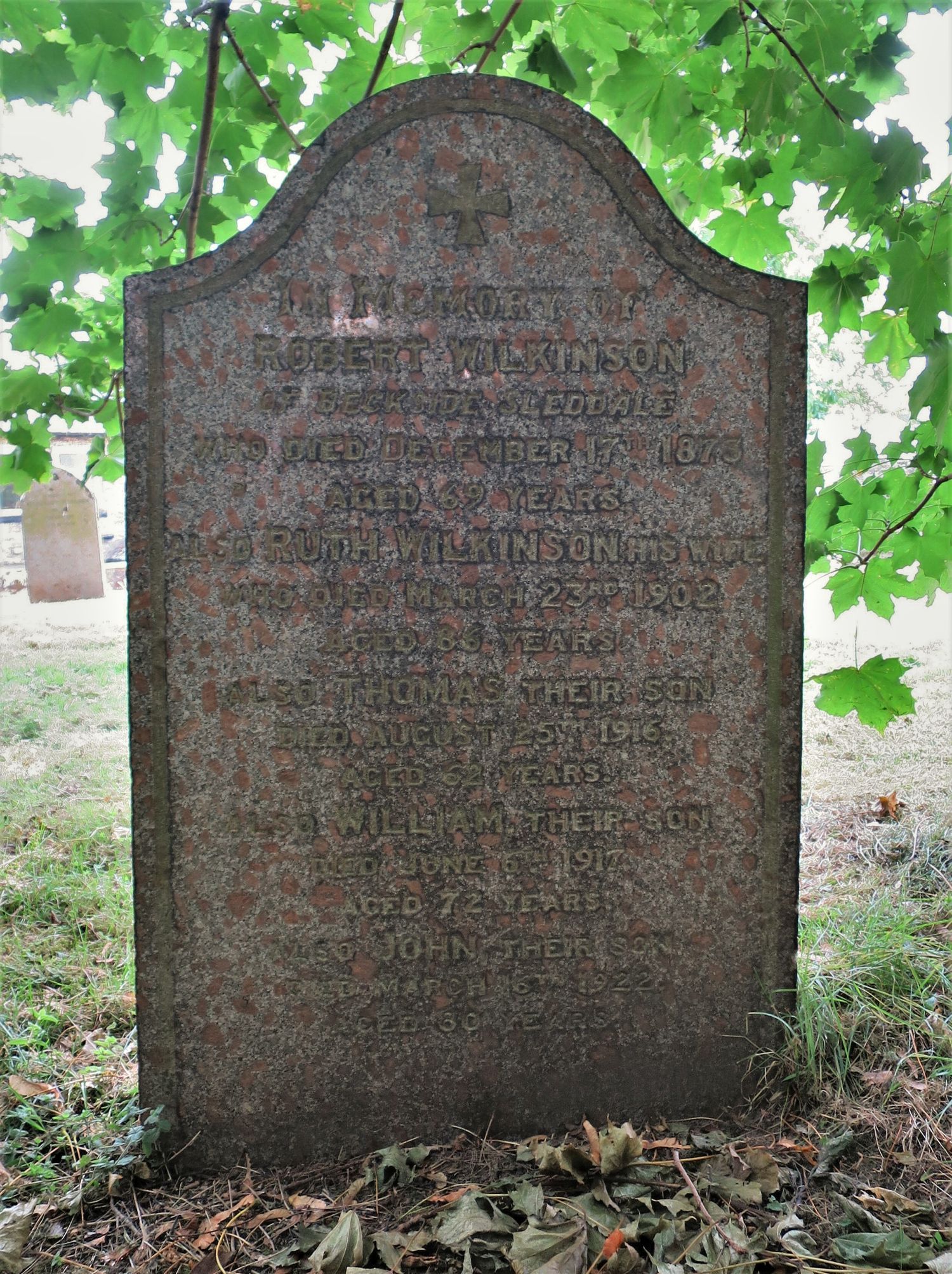 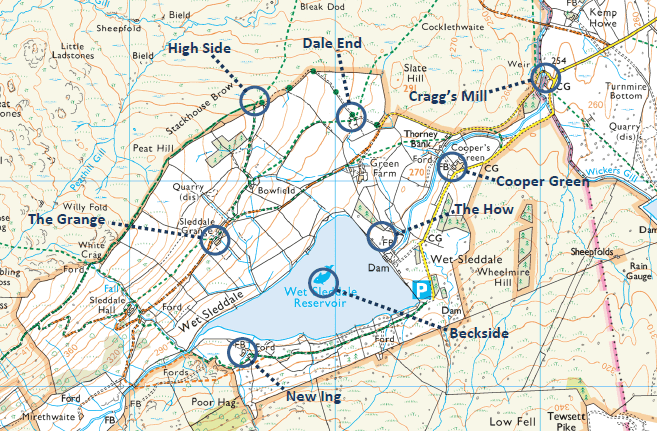 As you can see from the map above, Beckside Farm was completely submerged by the creation of Wet Sleddale Reservoir in 1962. Today only a few are working farms, the rest are either unoccupied, used as farm buildings, in ruin or have totally disappeared due to the construction of the dam. The current Wet Sleddale farms, that are now owned by United Utilities, are run by Mike Harrison and Son of Green Farm.
Sleddale Hall is now famous for being the setting for the 1980s film Withnail and I. 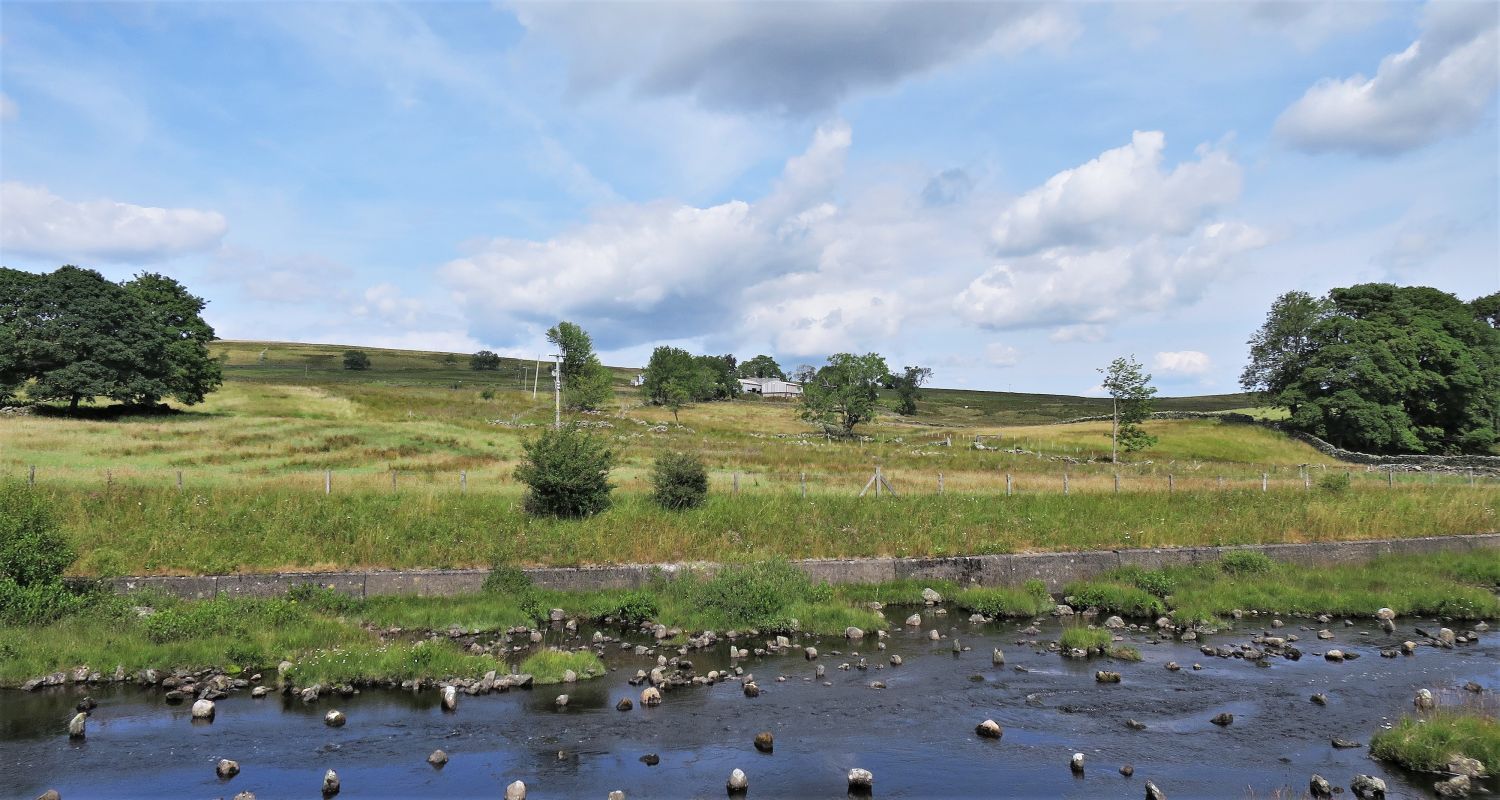 The small group of trees on the left is the location of the ruins of The How (The Howe). This farm was the birth place of Ruth Noble. Just beyond Green Farm (centre of picture) is the ruins of Dale End Farm, where Robert Wilkinson was living before he married Ruth in 1839.