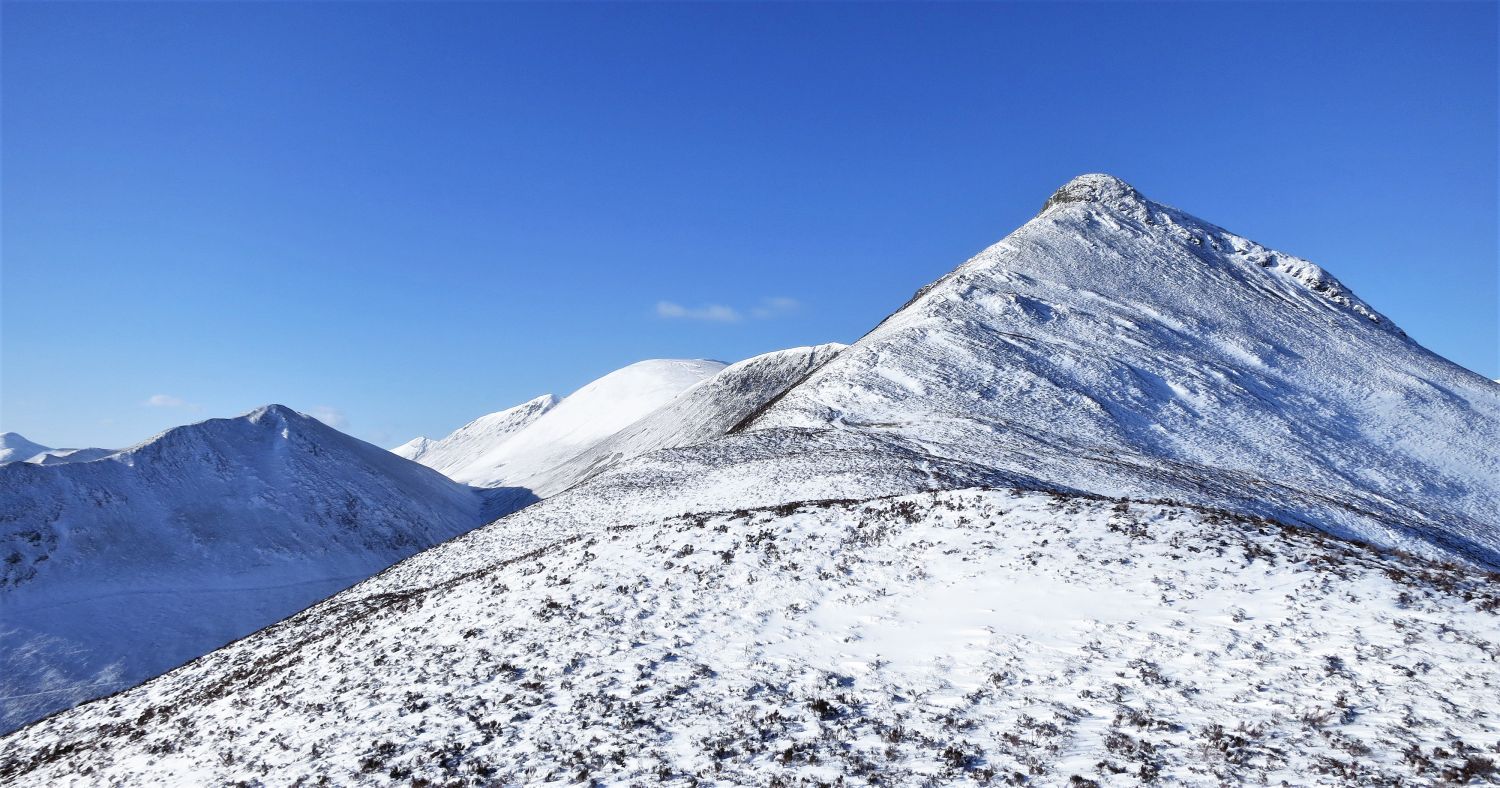 Causey Pike is often added to the end of an extended version of the Coledale Round, and the descent via Rowling End becomes the enemy of aching knees; why anyone would choose to add Causey Pike to this popular ‘horseshoe’ is beyond me, and the thought of descending from Rowling End after such a lengthy walk makes my knees shudder with fear. However, on ascent, especially in late winter, Causey Pike via Rowling End is an enjoyable climb, and the ridge from the summit to Scar Crags is equally as good. With the pleasant walk along Newlands Beck at the start, and the ridge of Outerside at the end, this is a splendid winter walk which also provides outstanding views.

There is limited free parking in Braithwaite, however, the school in the village provides parking at the weekends for £3 (at the time of writing). 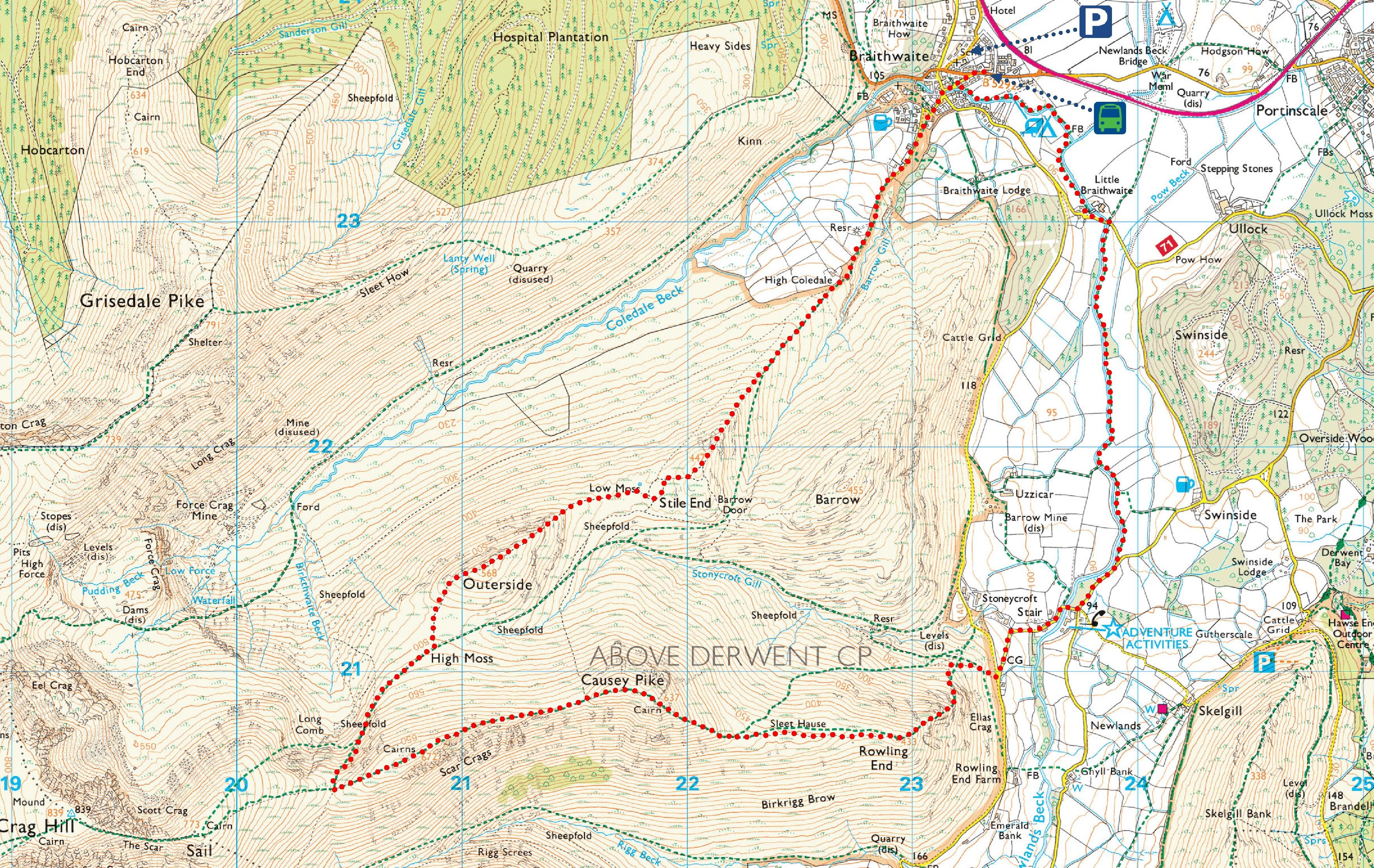 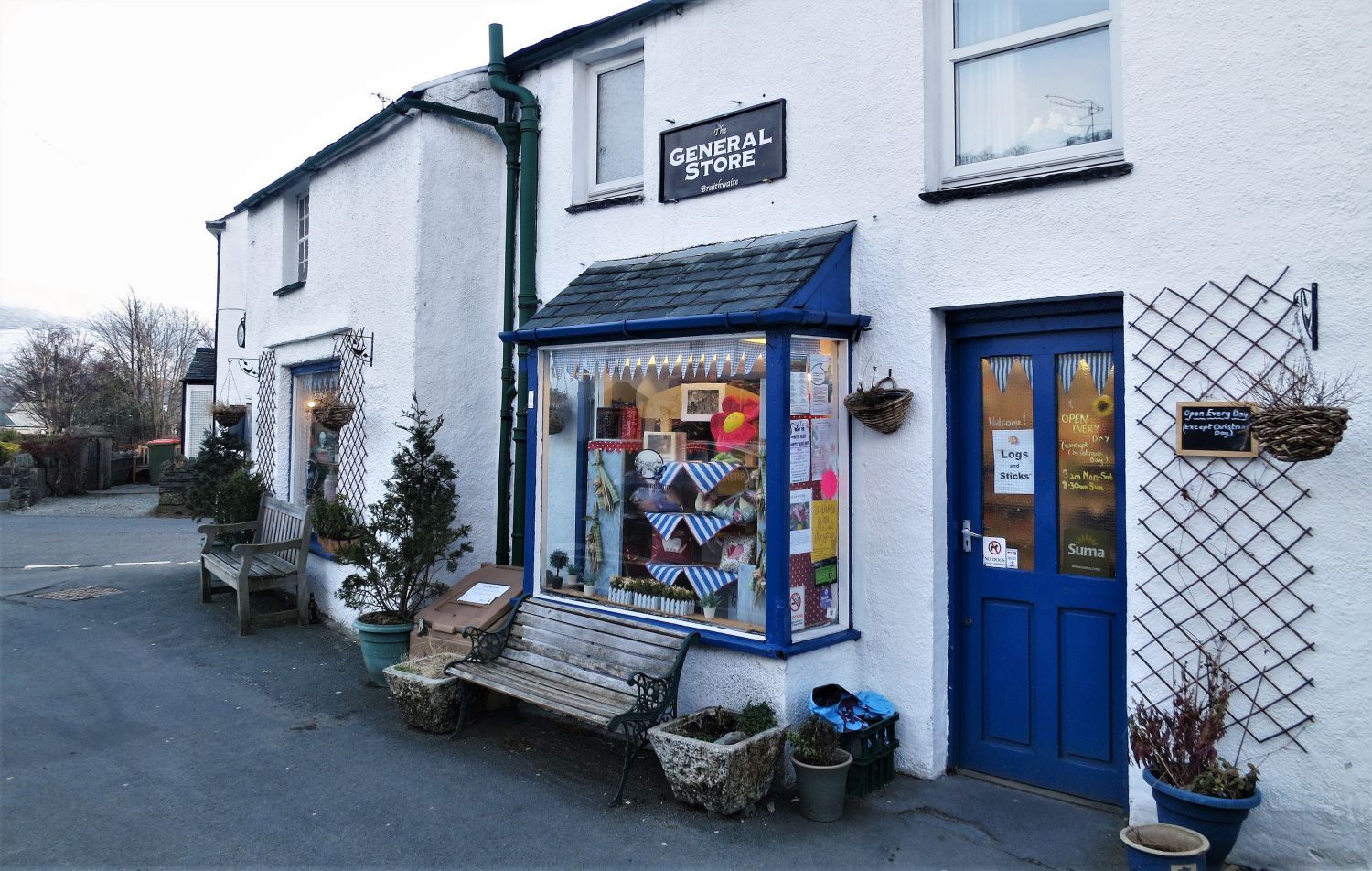 Open 8am until 7pm daily, the village shop makes tasty pies which are ideal for a winter walk on the fells; must start with a bacon and sausage butty first though! 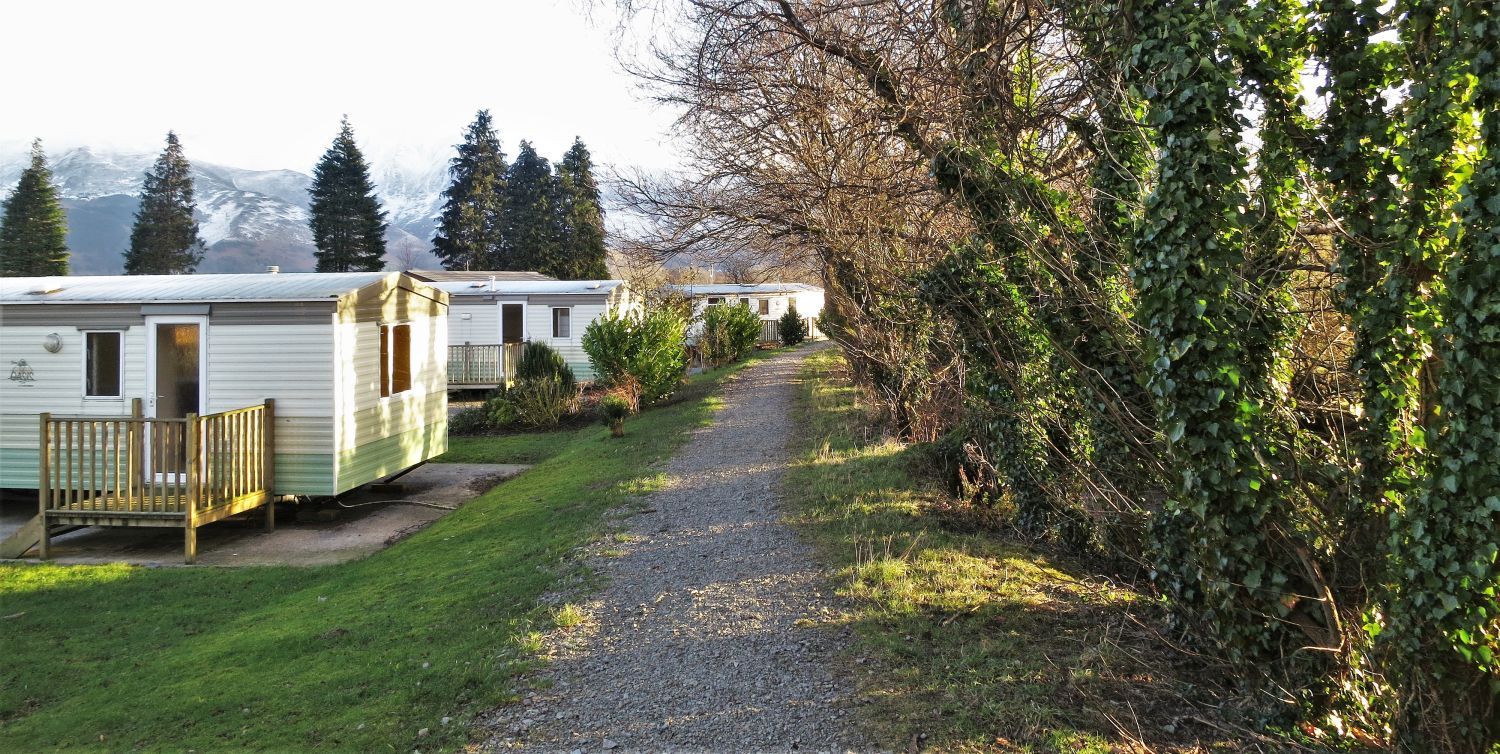 A pleasant walk through the holiday park following Coledale Beck before it ends its journey at Newlands Beck. 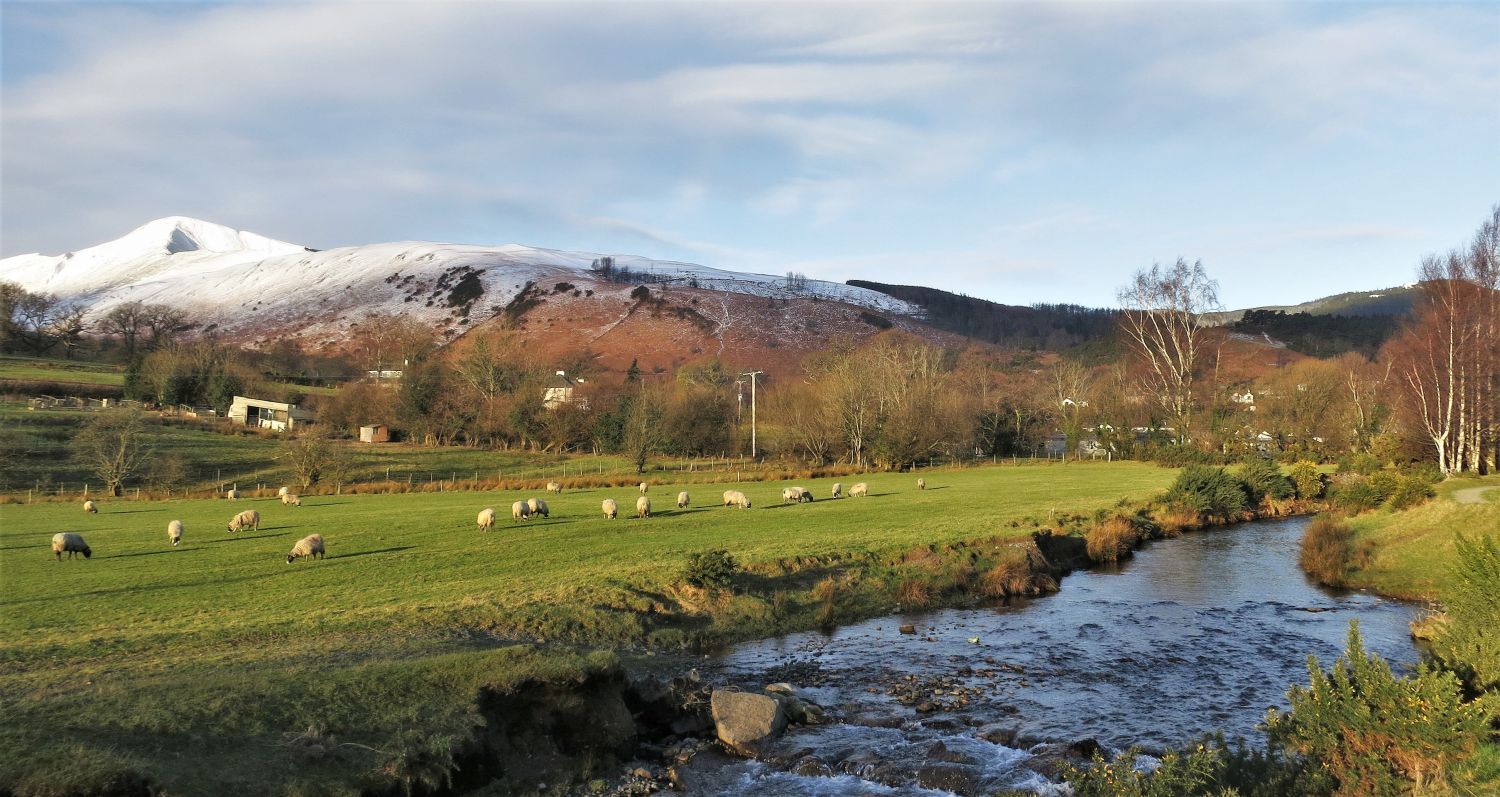 Looking back to Grisedale Pike over Coledale Beck 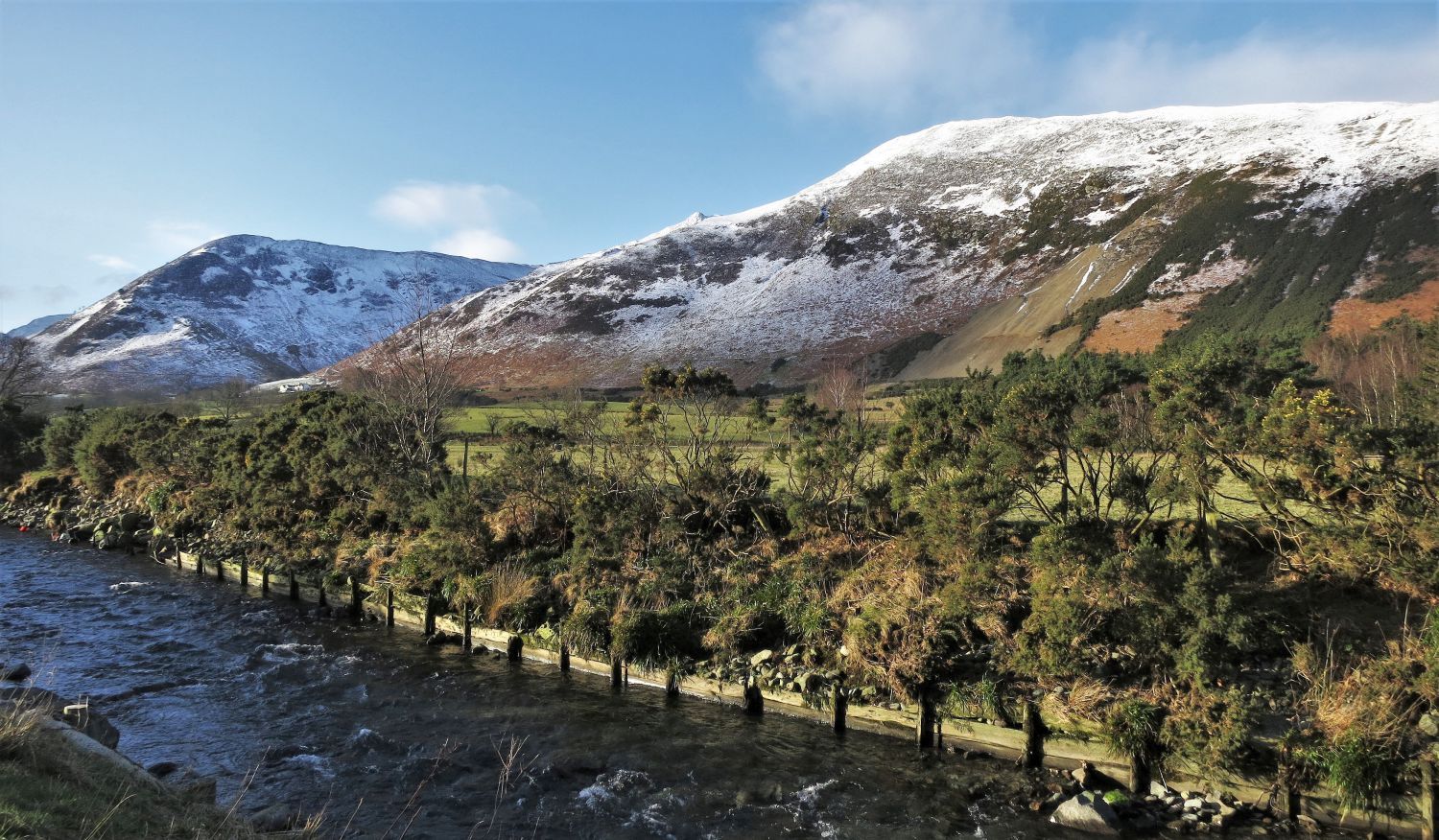 Interesting to see the very tip of Causey Pike appearing over Barrow’s south-east ridge. From the Newlands side, the striking colours of Barrow’s east face glisten in the early morning sun.

“Barrow is ‘the shivering mountain’ of Lakeland. The great fan of spoil from the old mines on the Newlands face sweeps down to the road near Uzzicar….” Barrow 2
AW 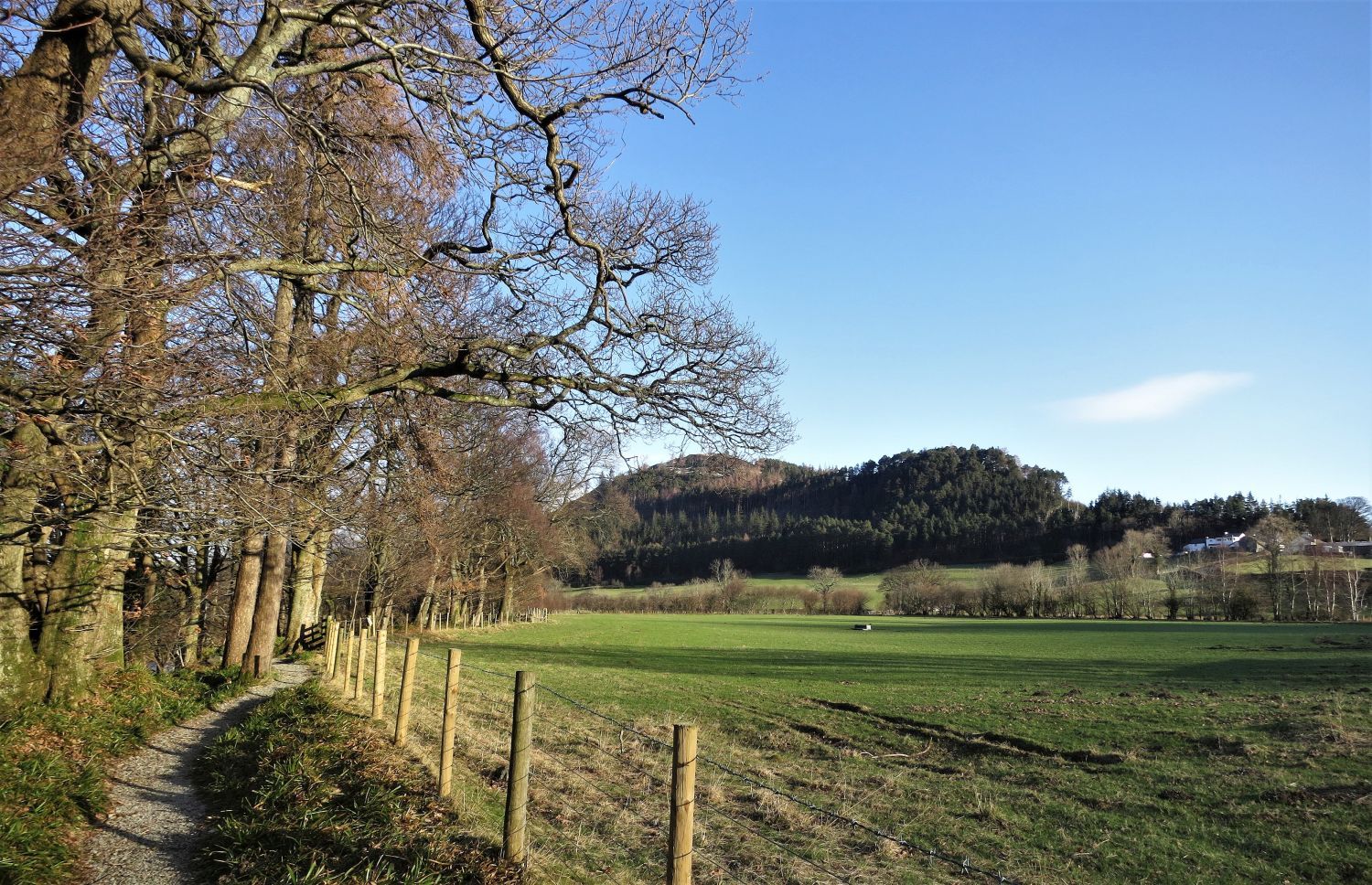 This small gravel path along Newlands Beck is a wonderful walk anytime of the year, and is very popular for low level walkers. 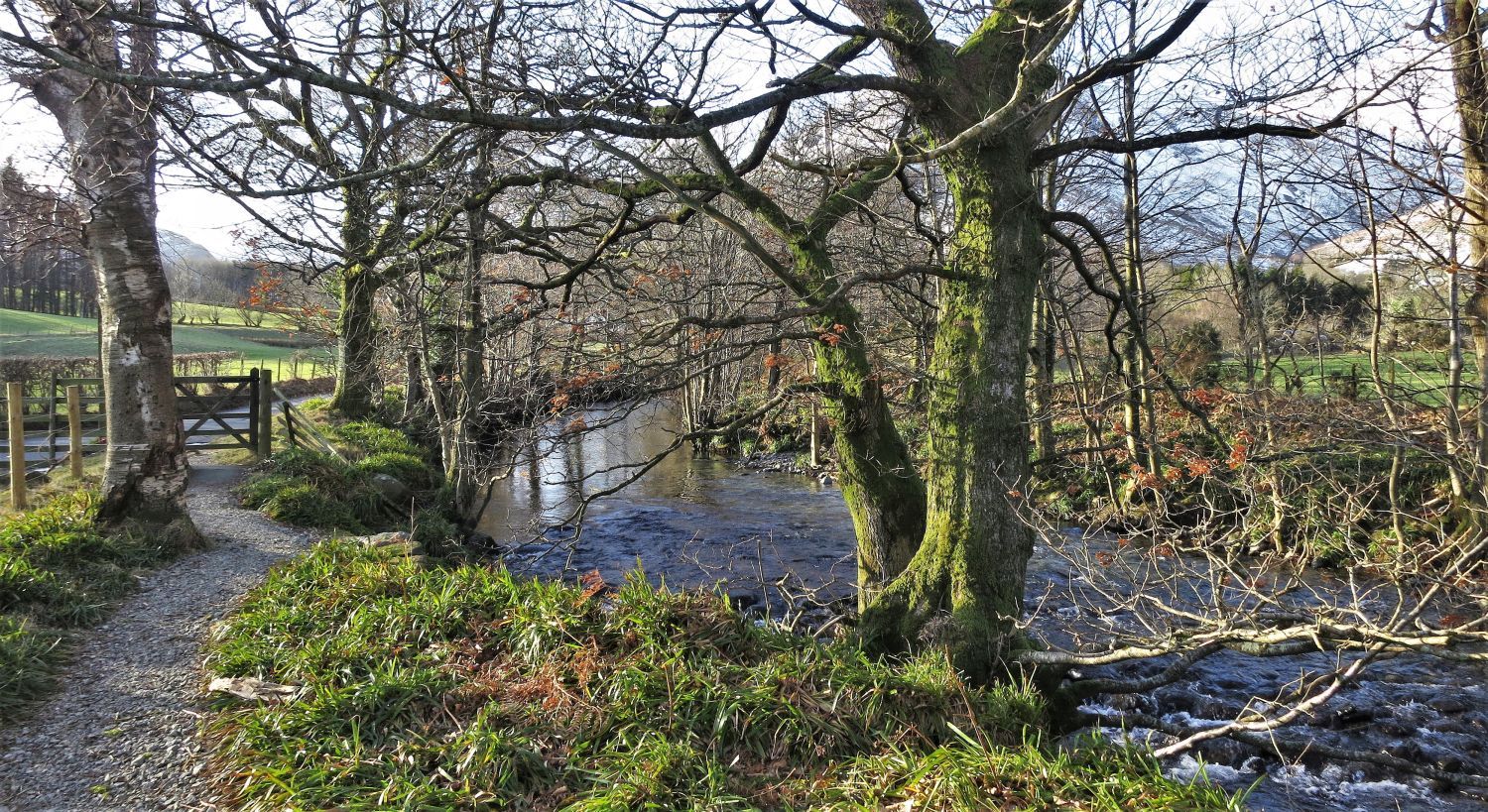 Approaching the road between Swinside and Stair 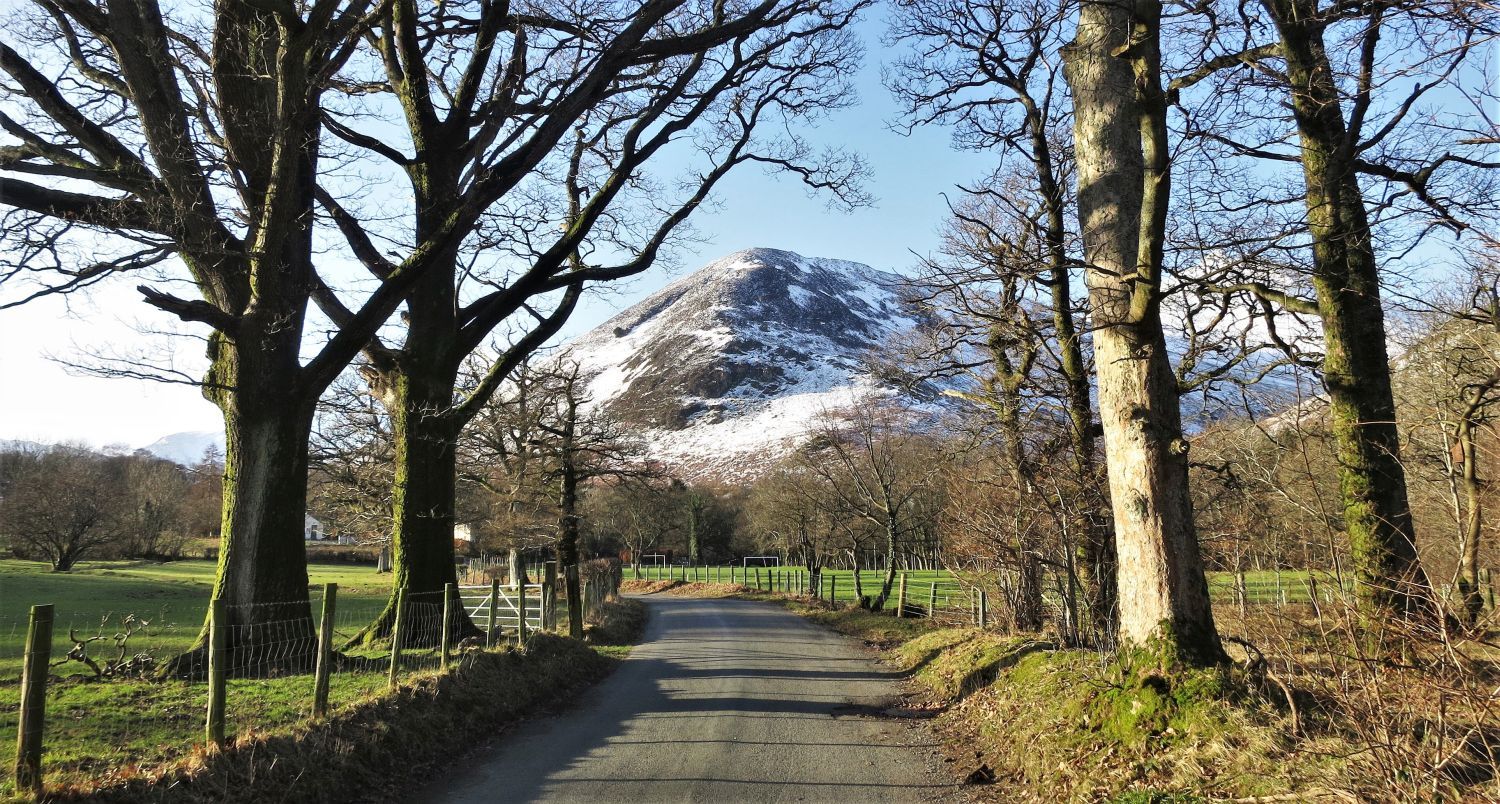 Rowling End and Causey Pike from the approach to Stair

Our main objectives appear above the small hamlet of Stair. 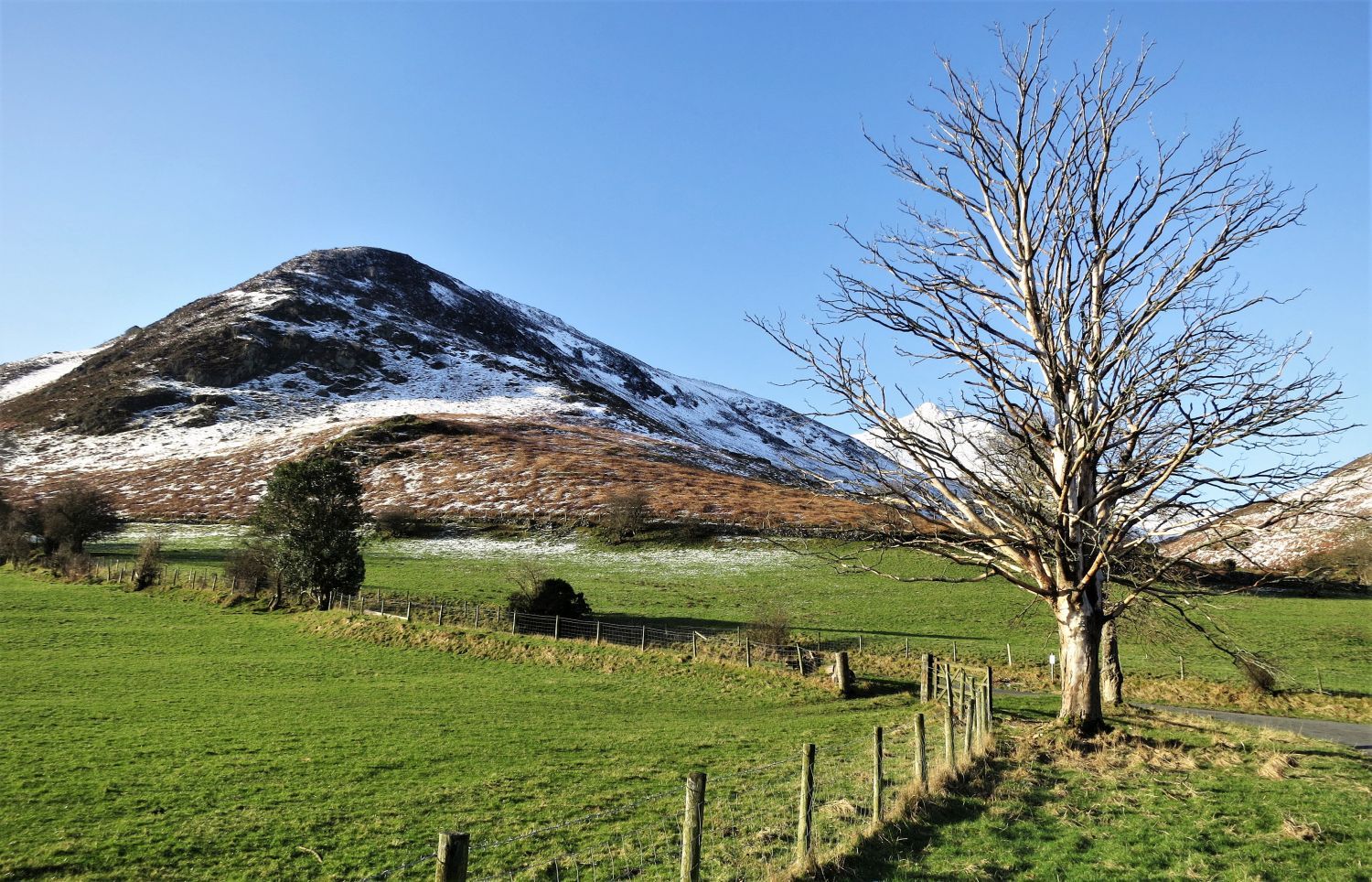 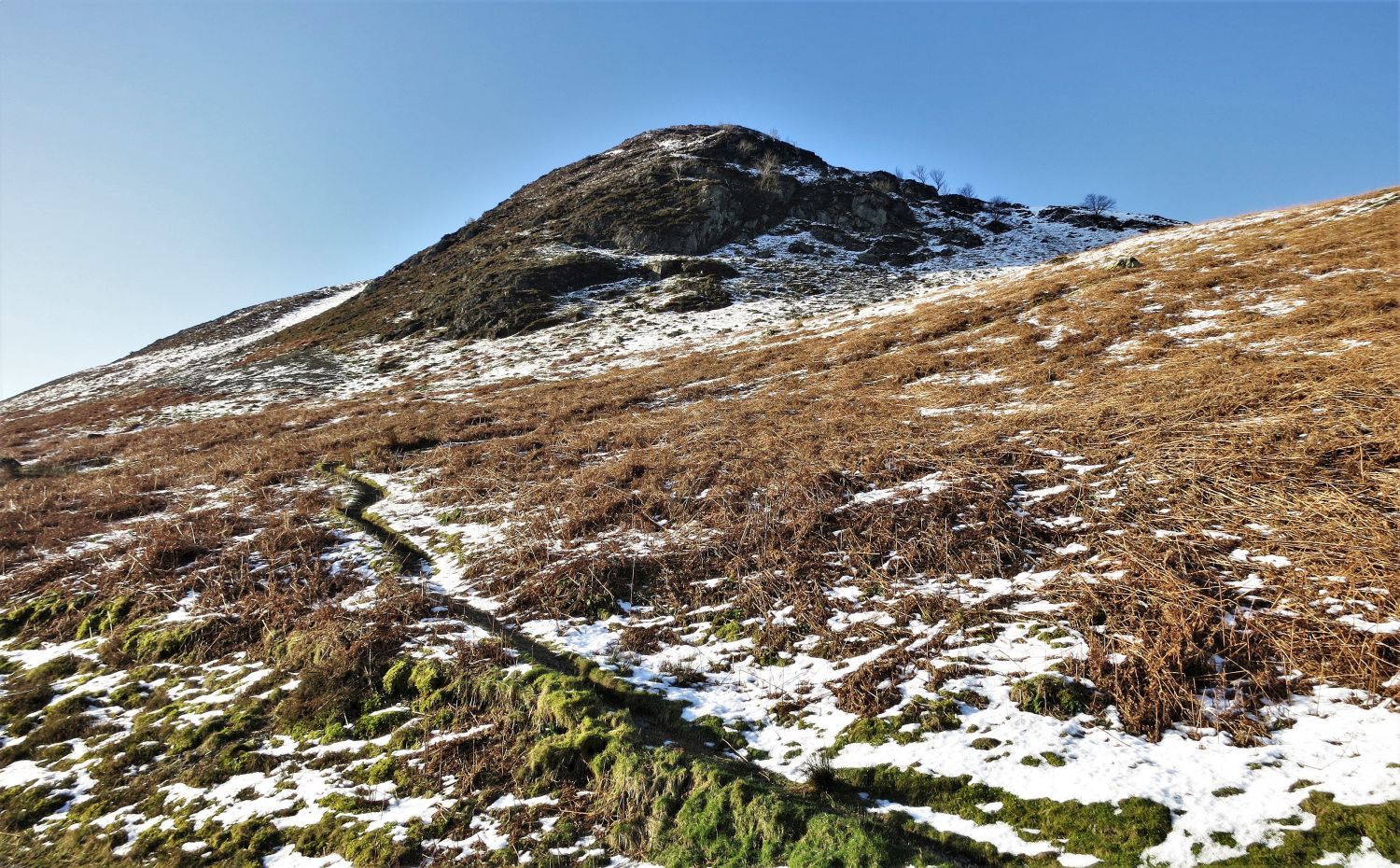 After crossing Newlands Pass, the road between Braithwaite and Buttermere, a path leads up the lower slope of Rowling End. It’s worth noting here that the ascent can be described in three parts: the lower slope is bracken (dead this time of year), the mid section is steep amongst rock and heather, and the final push on the upper section is an easier gradient through heather.

The Northern Fells from the lower slope

The ‘direct route’, which traverses above Stonycroft Gill, continues to Sleet Hause and then onto Causey Pike, however, we take a path to the left and follow a steeper climb up Rowling End.

“For sustained interest and beauty of views, the Rowling End route is to be preferred…” Causey Pike 4
AW

The steeper mid section of the ascent is Ellas Crag. 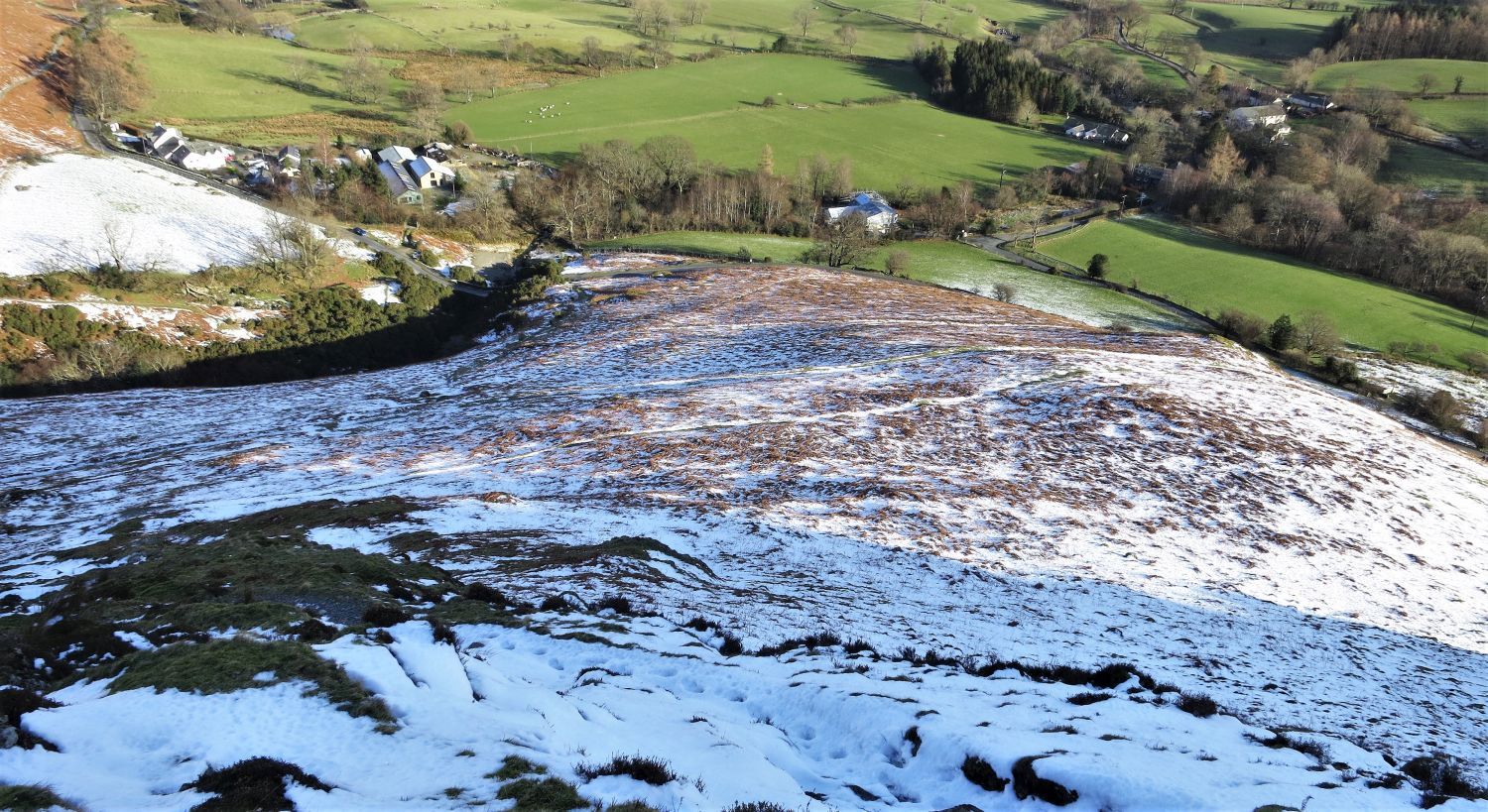 Looking down to Stoneycroft and Stair from Ellas Crag 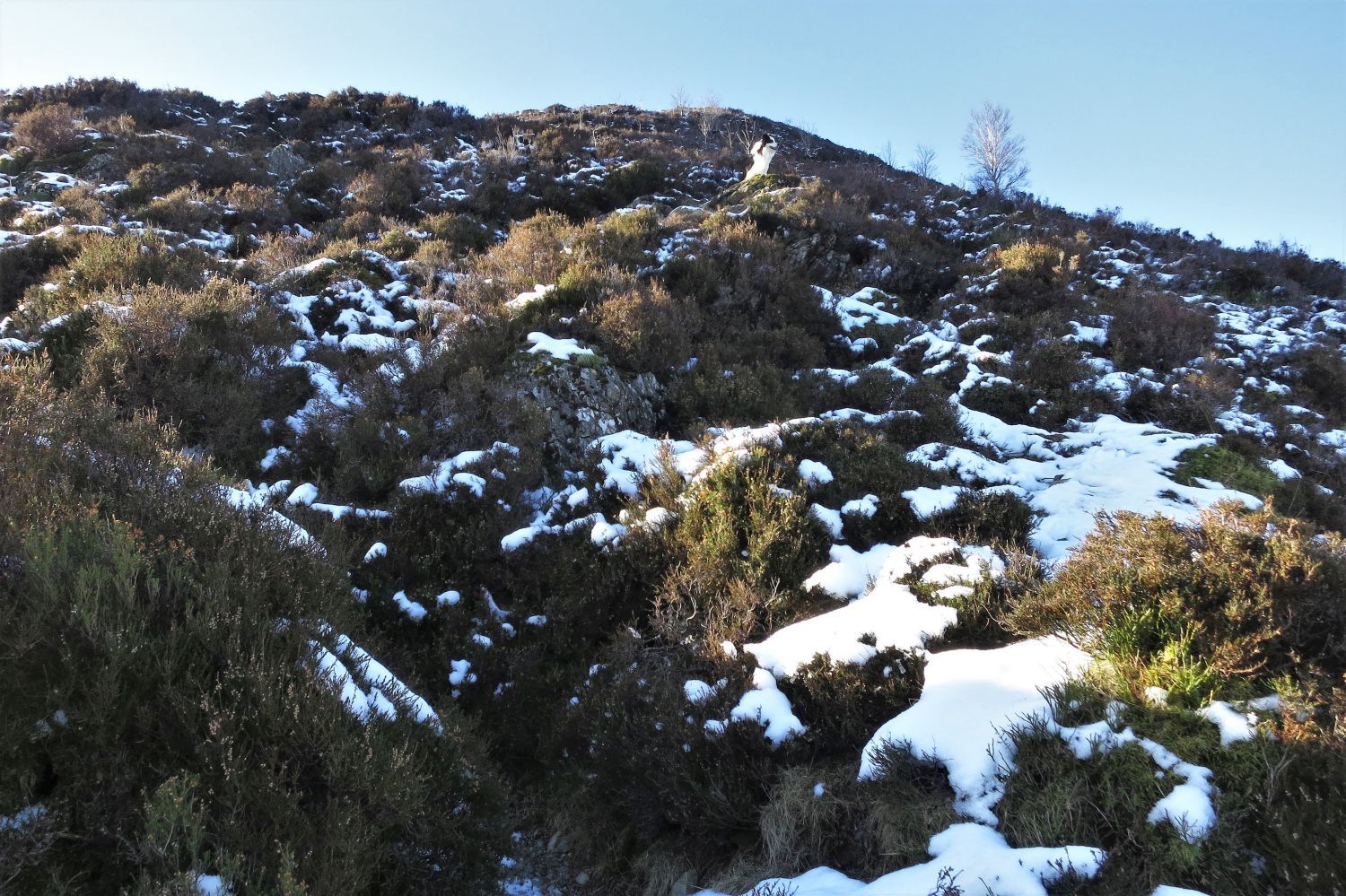 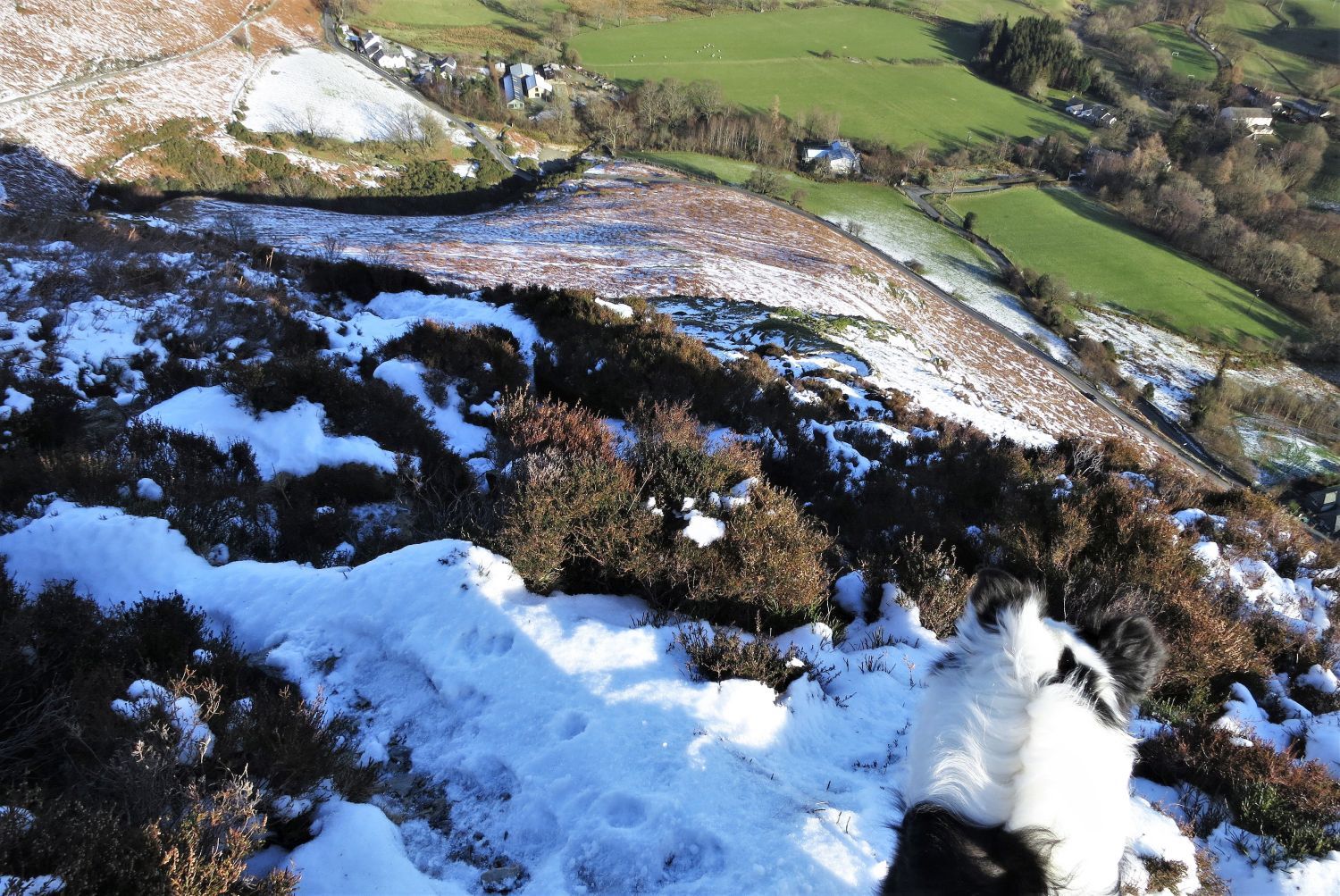 Frankie looking down to the lower slope from Ellas Crag 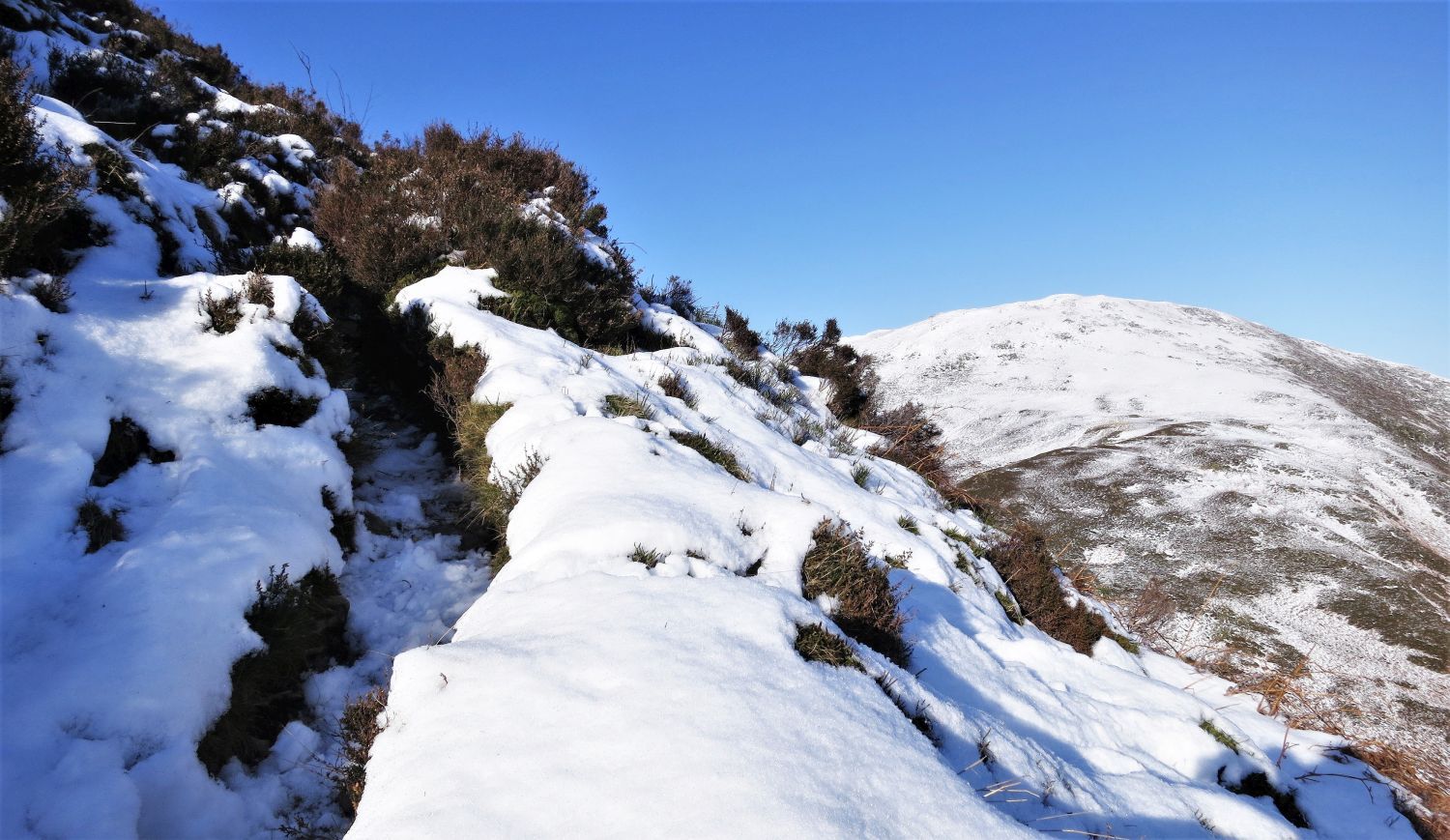 Barrow from the ascent of Ellas Crag

At times, the path becomes a winding narrow trough; it’s easy to follow through the heather. 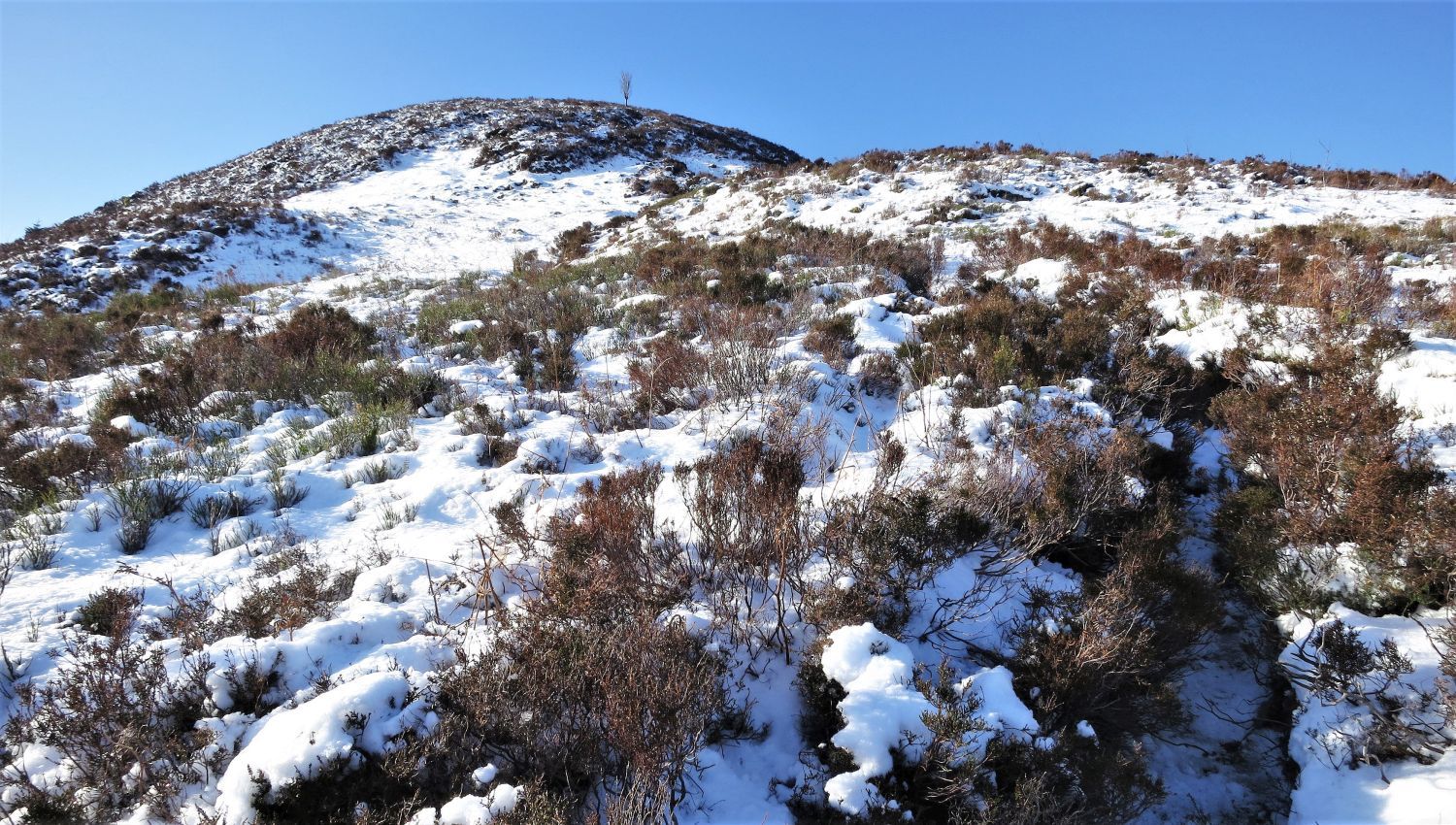 The ‘solitary tree’ on the upper section

The gradient is much easier now as we approach the summit of Rowling End.

The Northern Fells from the ‘solitary tree’ 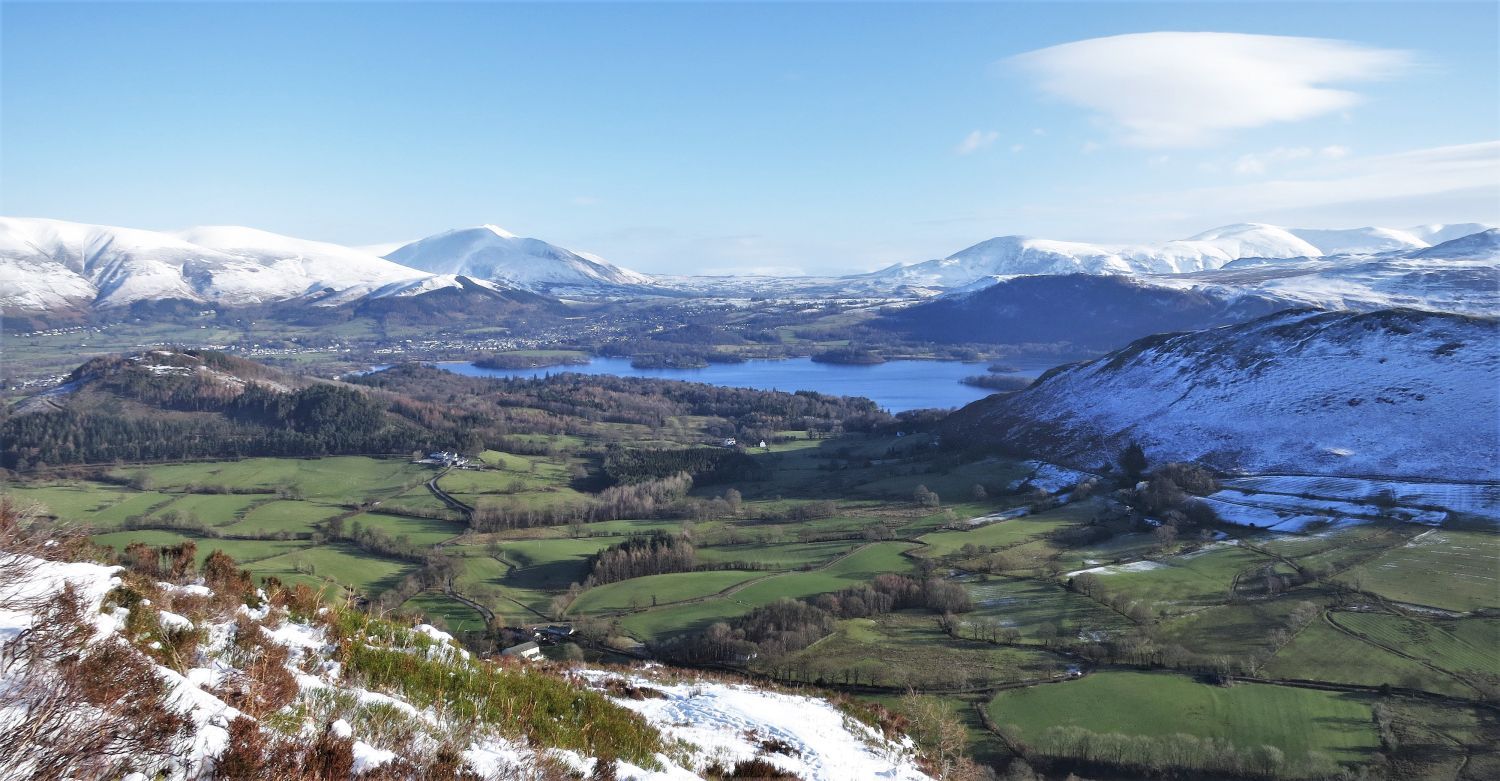 The Vale of Keswick and Derwent Water from the ‘solitary tree’

The two distant peaks between Robinson and Ard Crags are High Stile and Red Pike.

The eastern and central spines over the ridge of Catbells

The Northern Fells over Barrow, from Sleet Hause

Here, the ‘direct route’ joins the ridge at Sleet Hause; the views are superb north, east and south, and to the west our attention is drawn towards the dominant peak of Causey Pike.

The ‘rocktower’ of Causey Pike from Sleet Hause

“From Sleet Hause to the summit the way lies up the sharp east-south-east ridge : a delightful climb.” Causey Pike 4
AW

Ard Crags from the ascent of Causey Pike 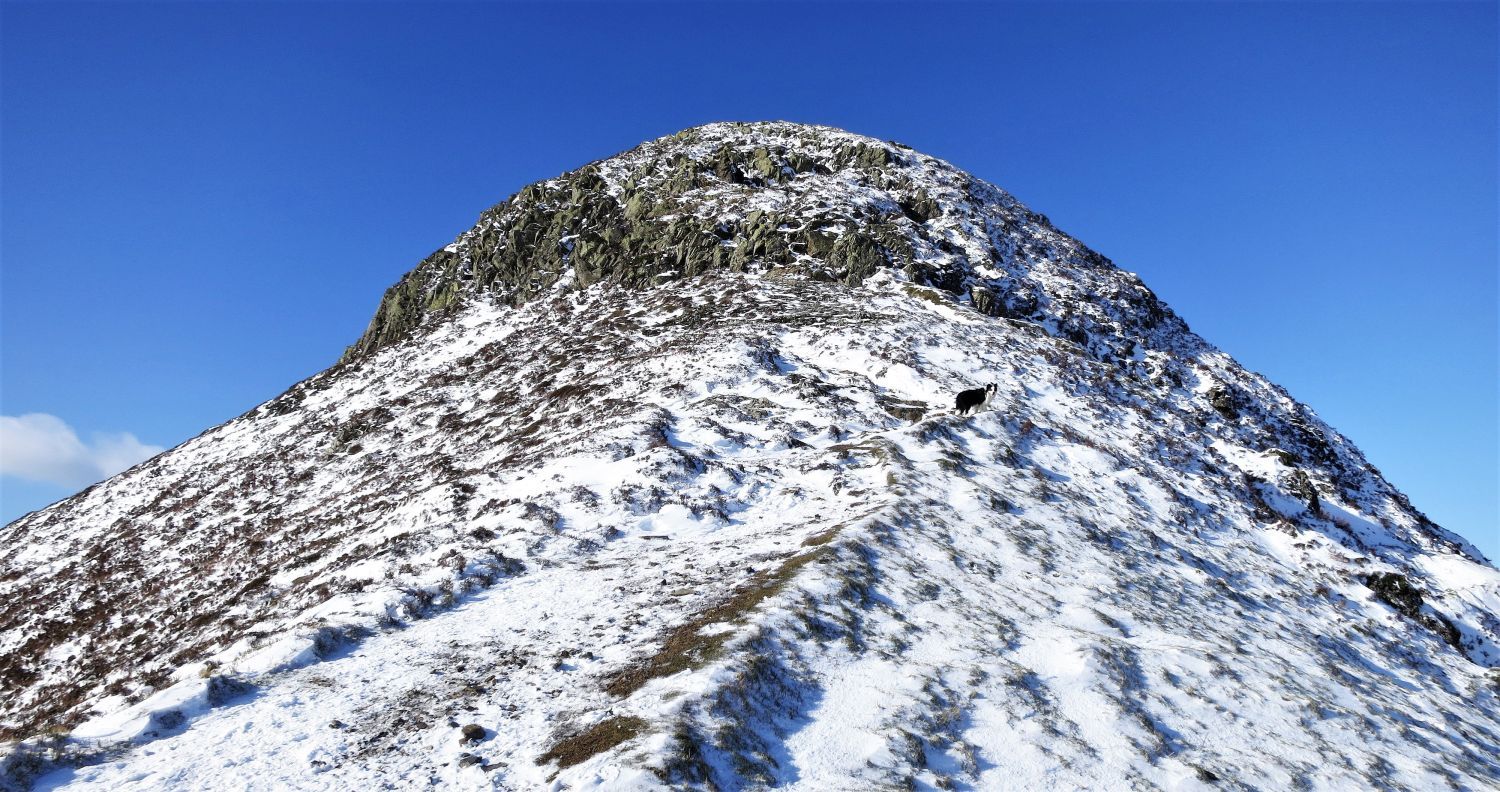 “The final rocktower requires the use of hands; it is easy, but no place for fooling about.” Causey Pike 4
AW 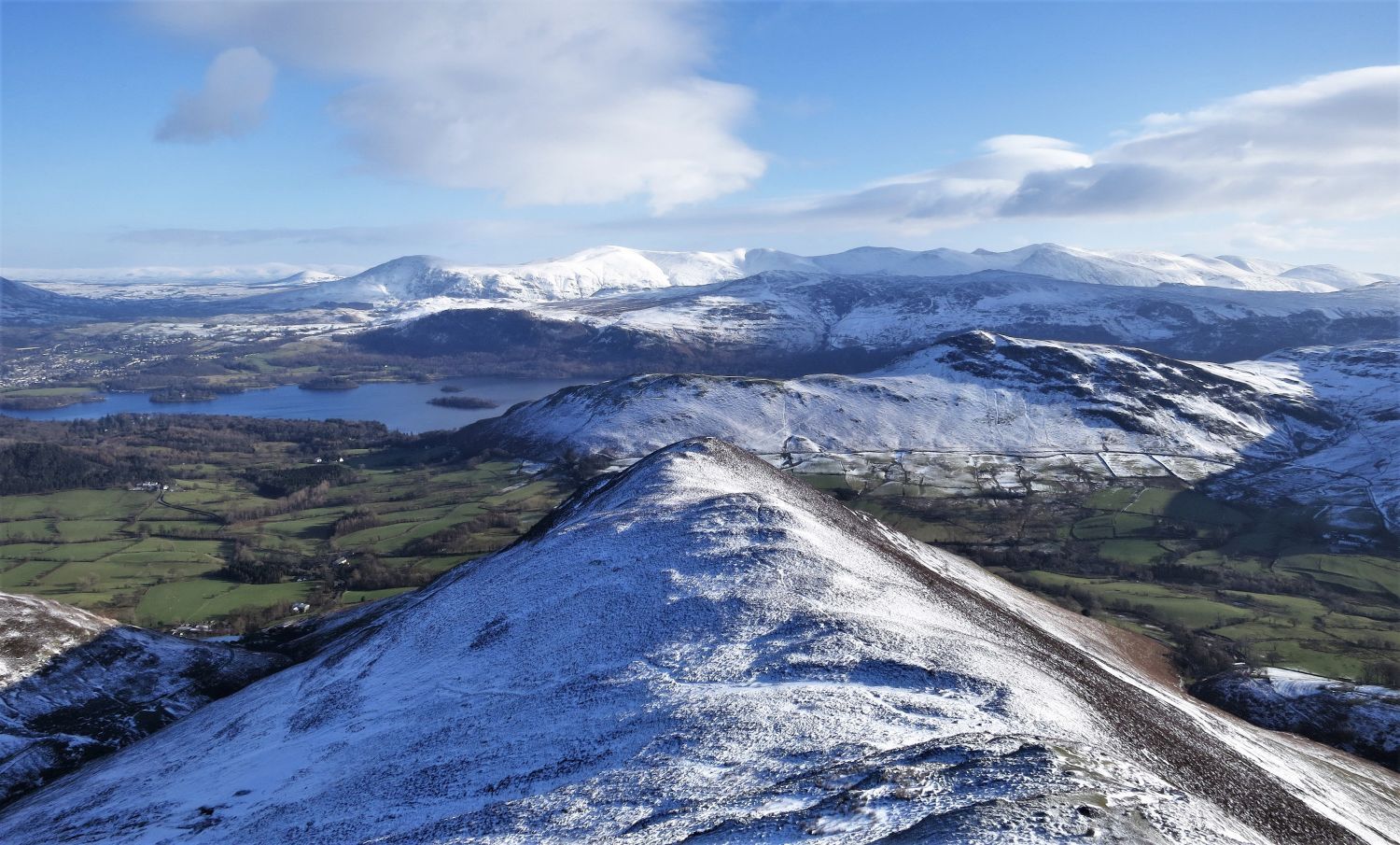 Looking back to Rowling End from the ascent of Causey Pike 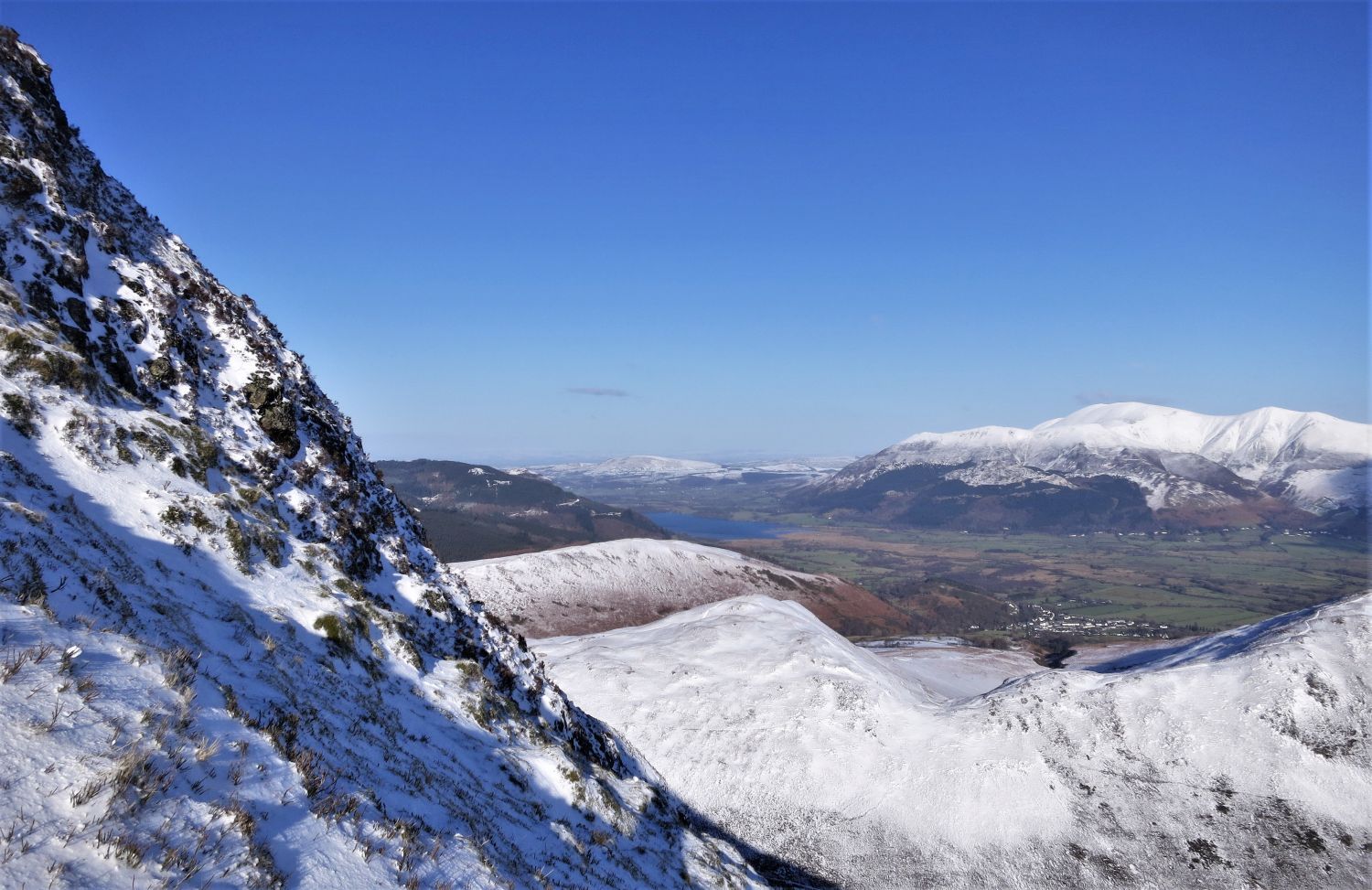 Bassenthwaite Lake from the ‘rocktower’ 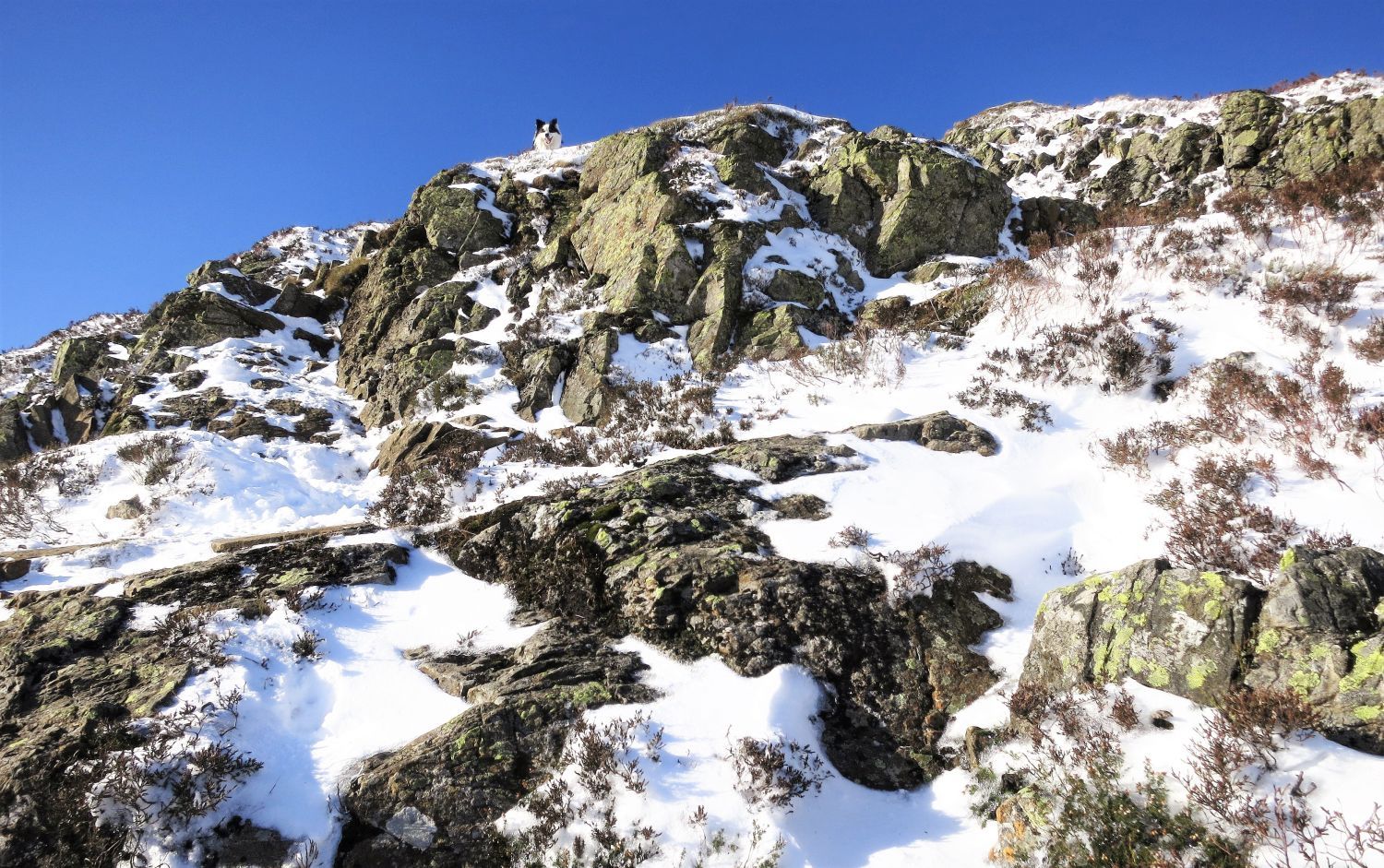 The Coledale Group from the summit of Causey Pike

The Northern Fells over Vale of Keswick and Barrow, from the summit of Causey Pike

“In all directions the scenery is of the highest order. Predominantly the view is of mountains, but the severity and starkness of their outlines is softened by the verdant loveliness of the Vales of Keswick and Newlands.” Causey Pike 7
AW 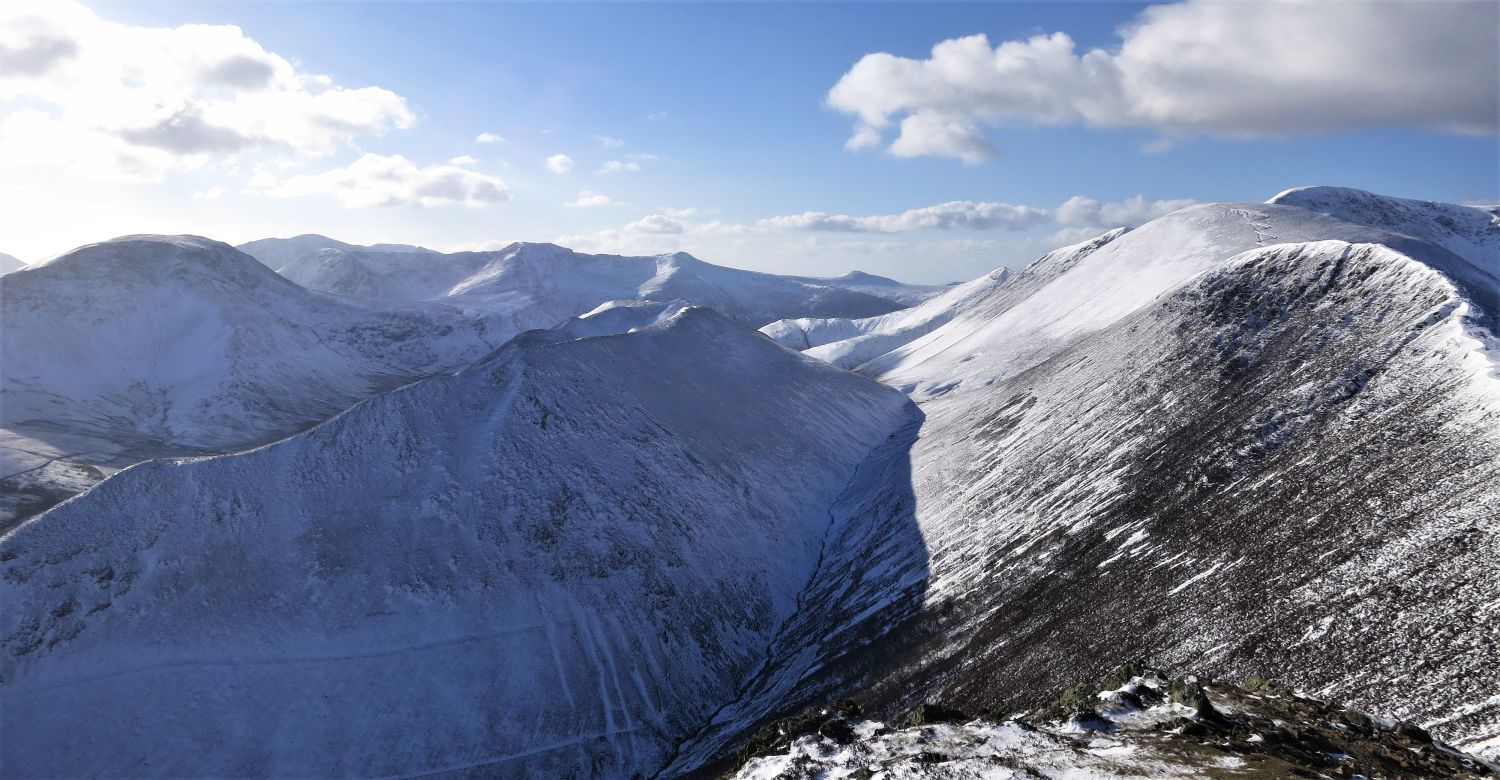 Robinson (left) and Ard Crags over Rigg Gill, from the summit of Causey Pike 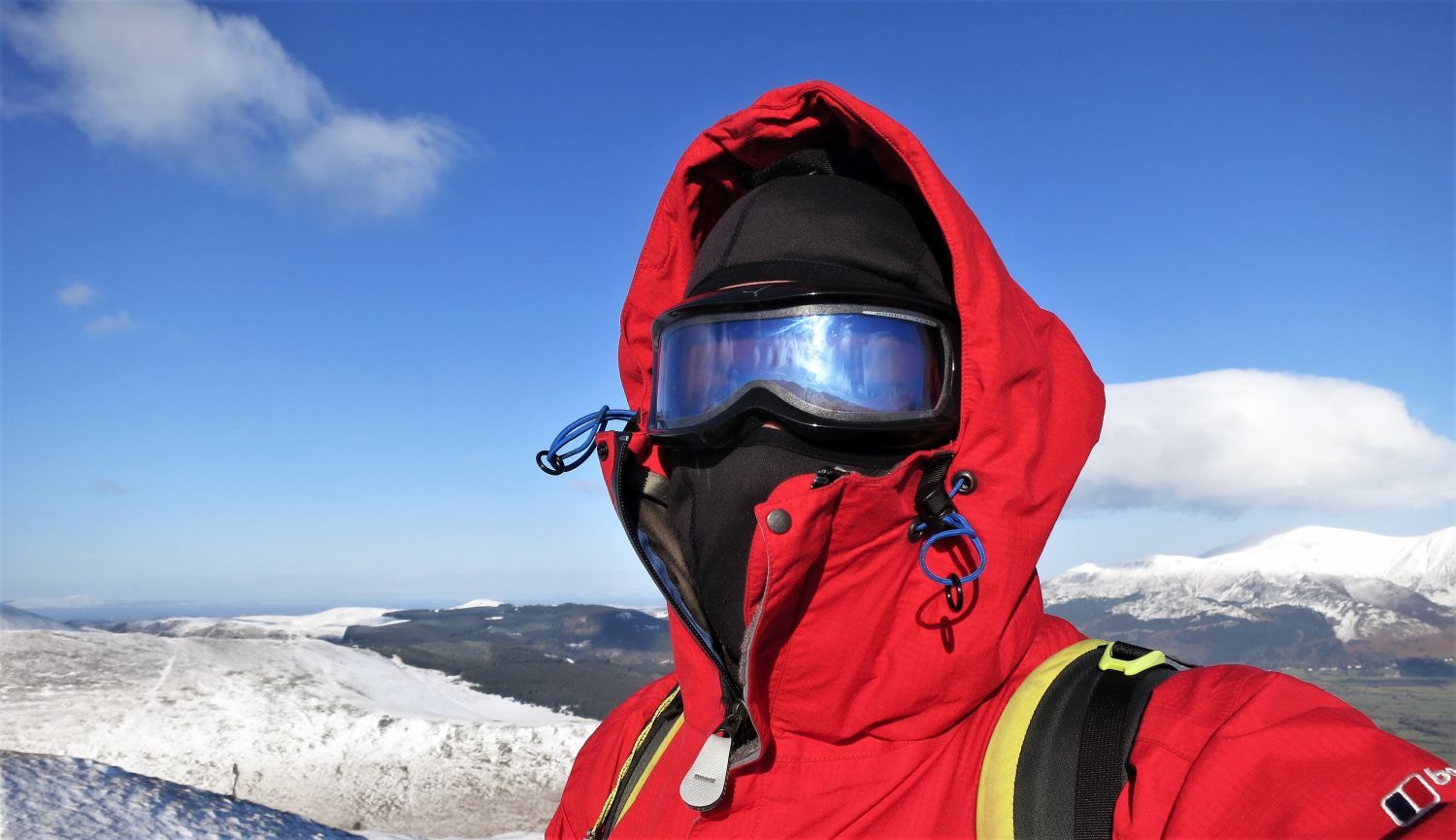 The correct gear for these conditions

During the ascent I was sheltered by the bitter wind from the west, but on the summit it became baltic! 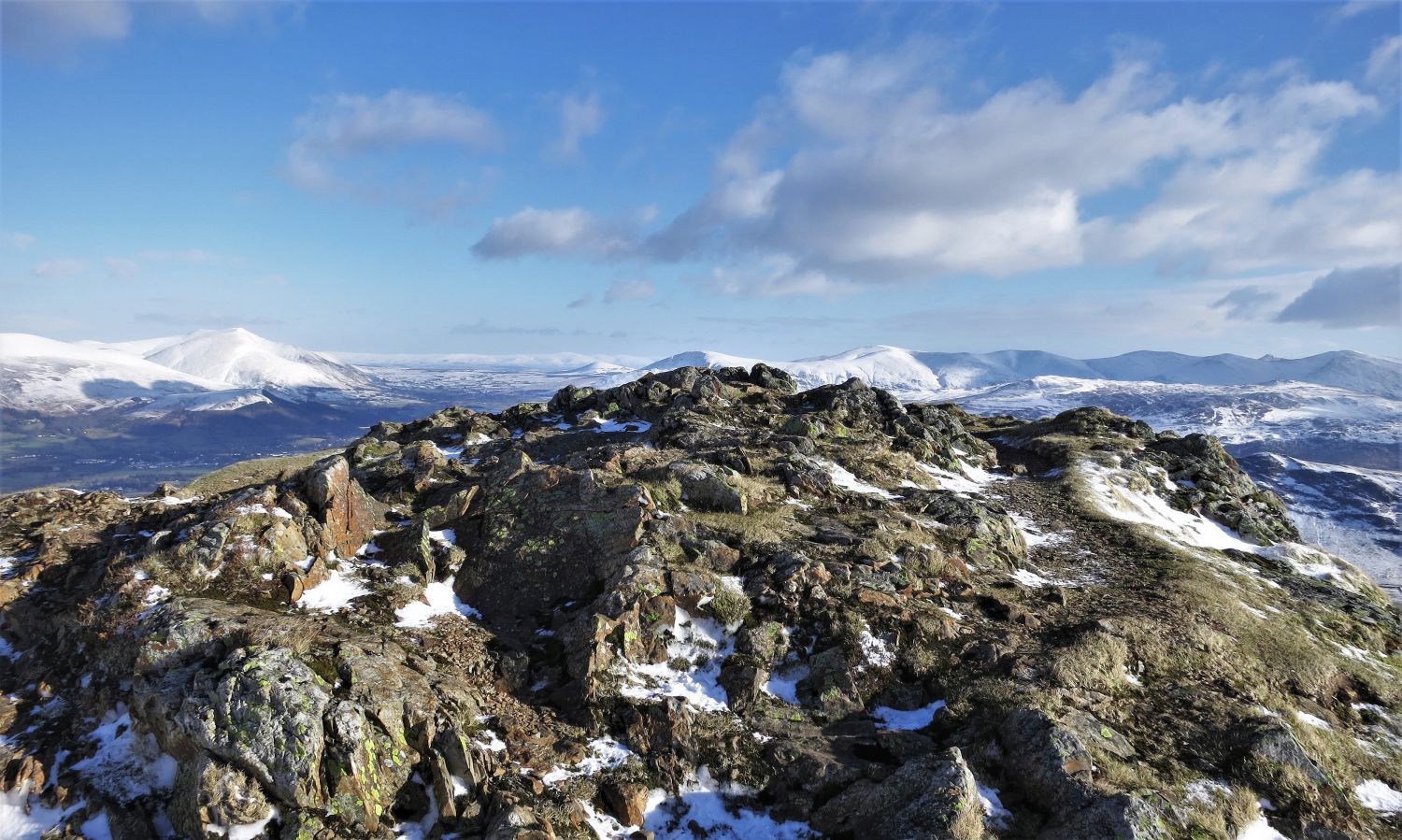 “This delightful ‘top’ is quite unlike any other, its narrow crest undulating over five distinct bumps (meticulous visitors will count seven), the most prominent being the one terminating so abruptly the eastern end of the crest: this is the rocky knob that identifies Causey Pike unmistakably in distant views of the fell. The eastern knob appears to have a slight advantage in altitude, a matter of a few feet or even inches only, over the third bump – the second bump is clearly lower.” Causey Pike 6
AW (revised by Chris Jesty) 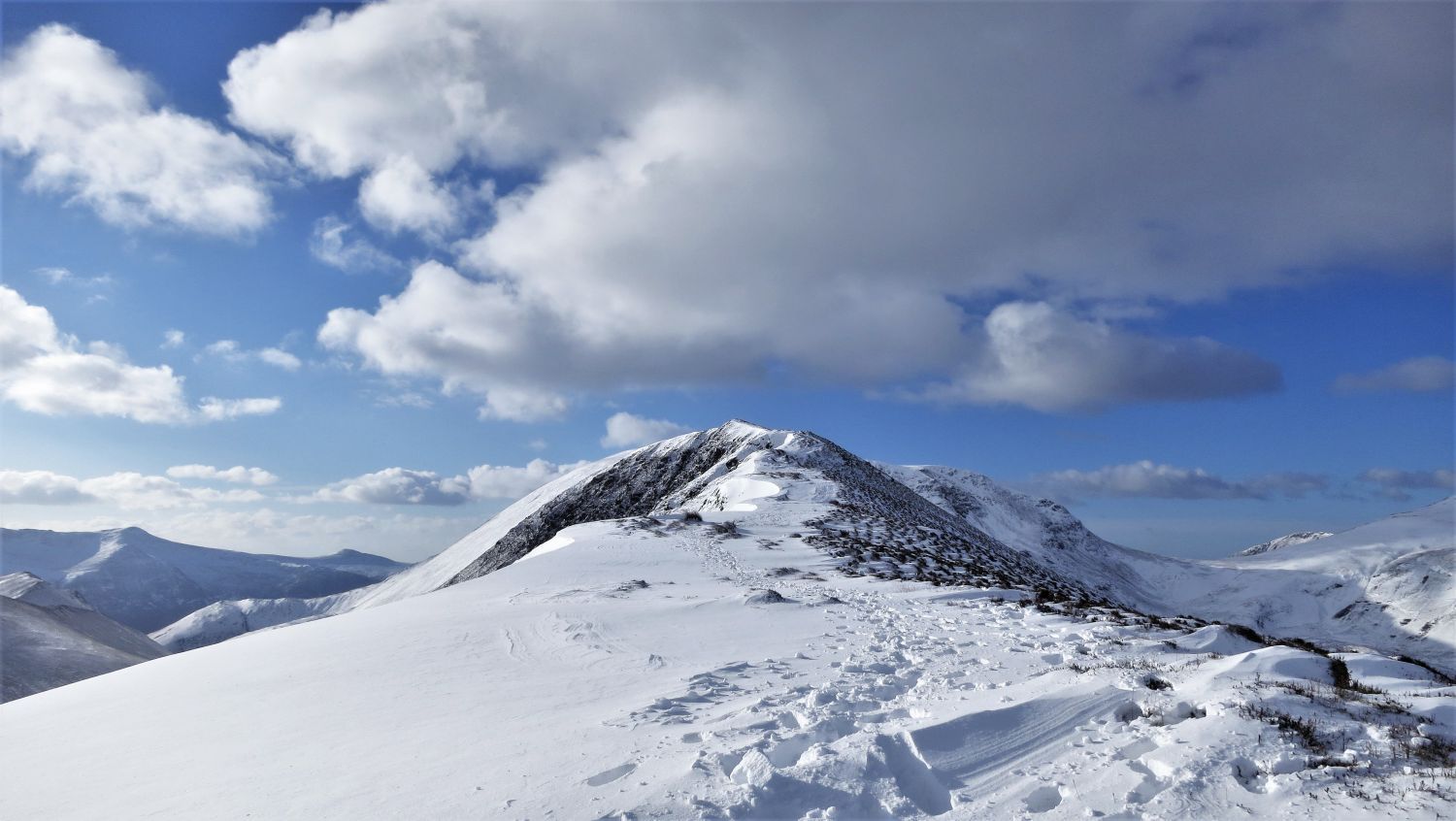 Scar Crags from the ‘depression’ 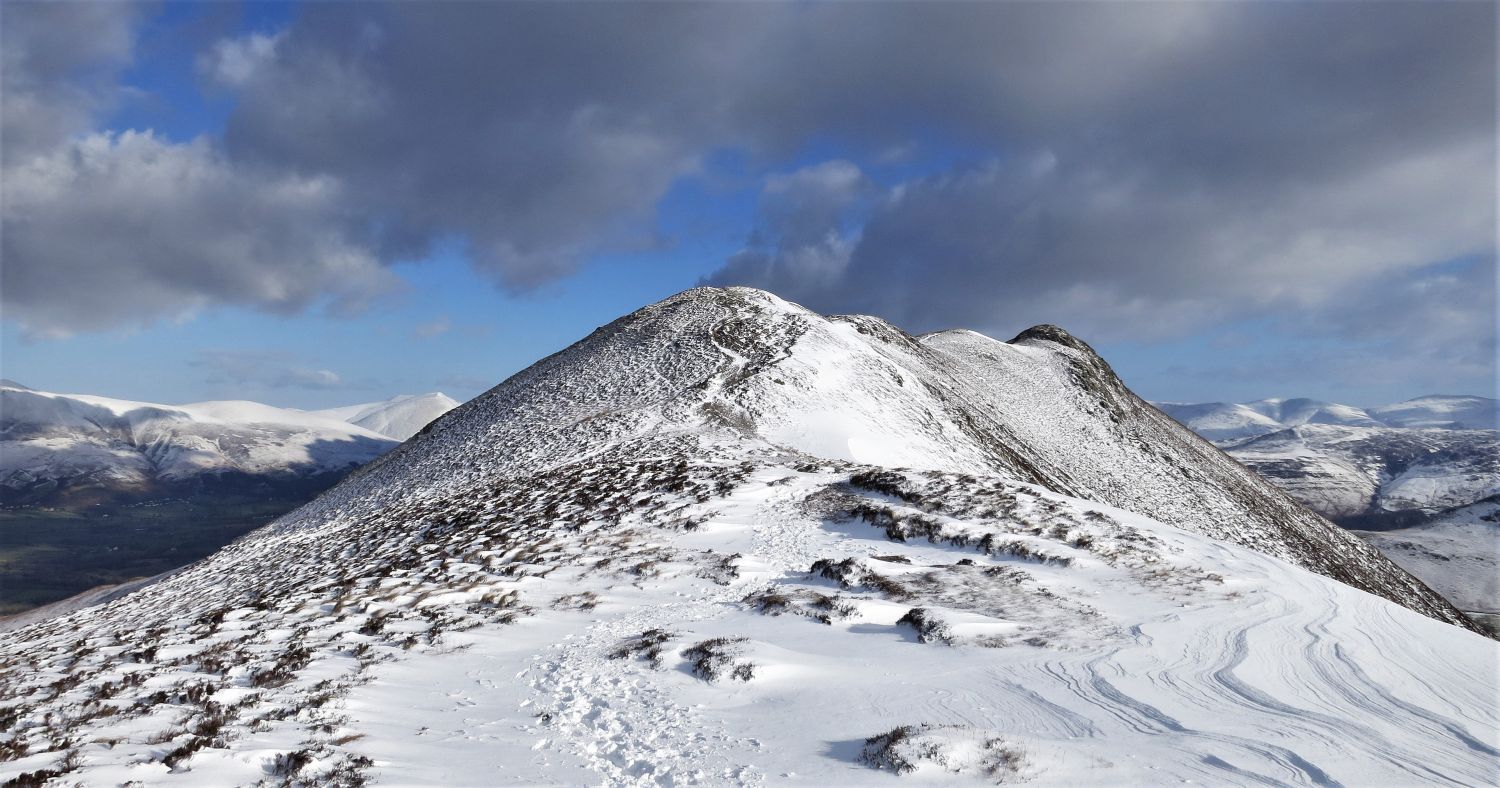 Here, the “distinct bumps” of Causey Pike are prominent. 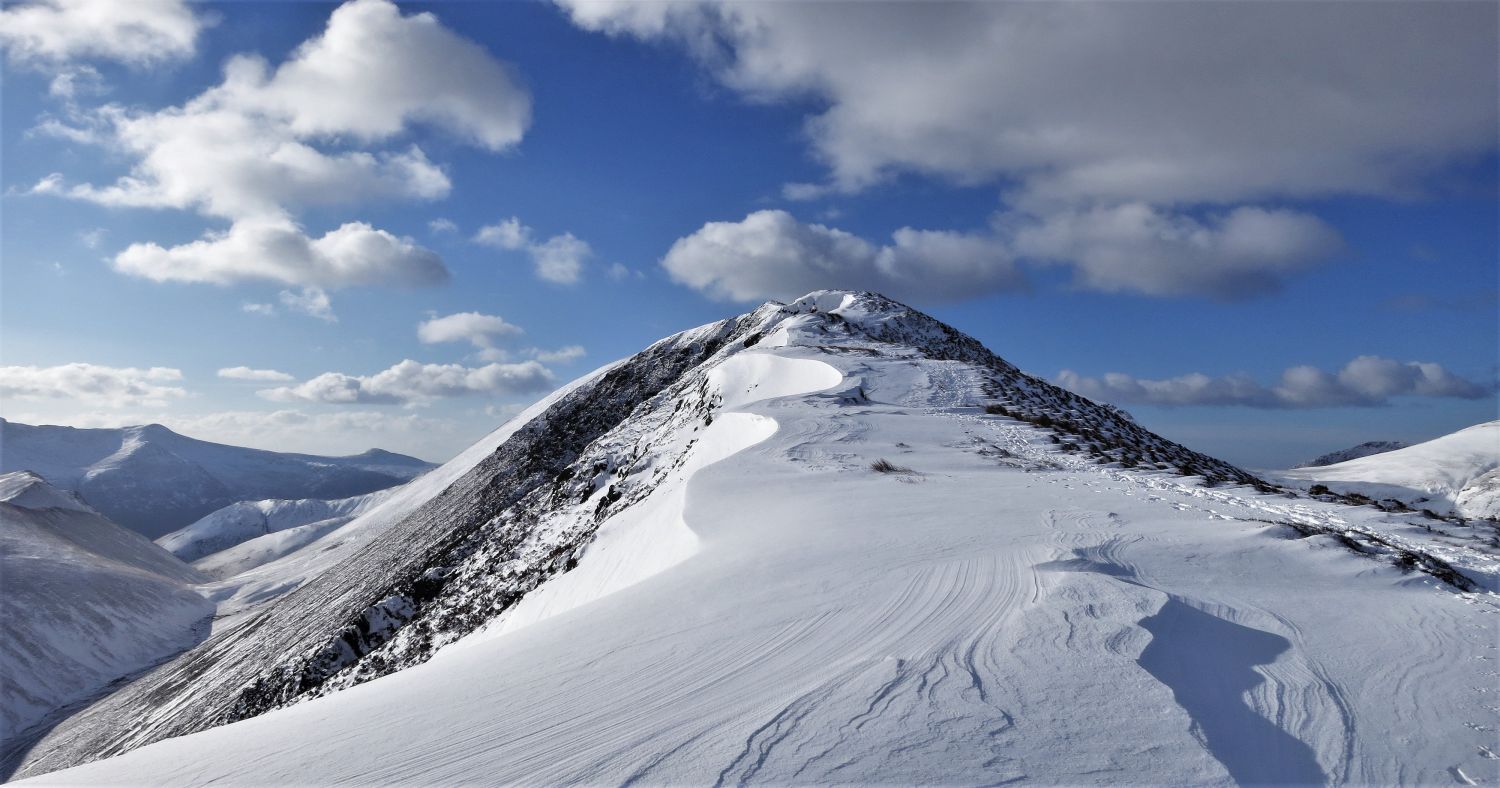 The connecting ridge to Scar Crags is delightful in winter, and the views are equally as good; one of the finest ridges of Lakeland. 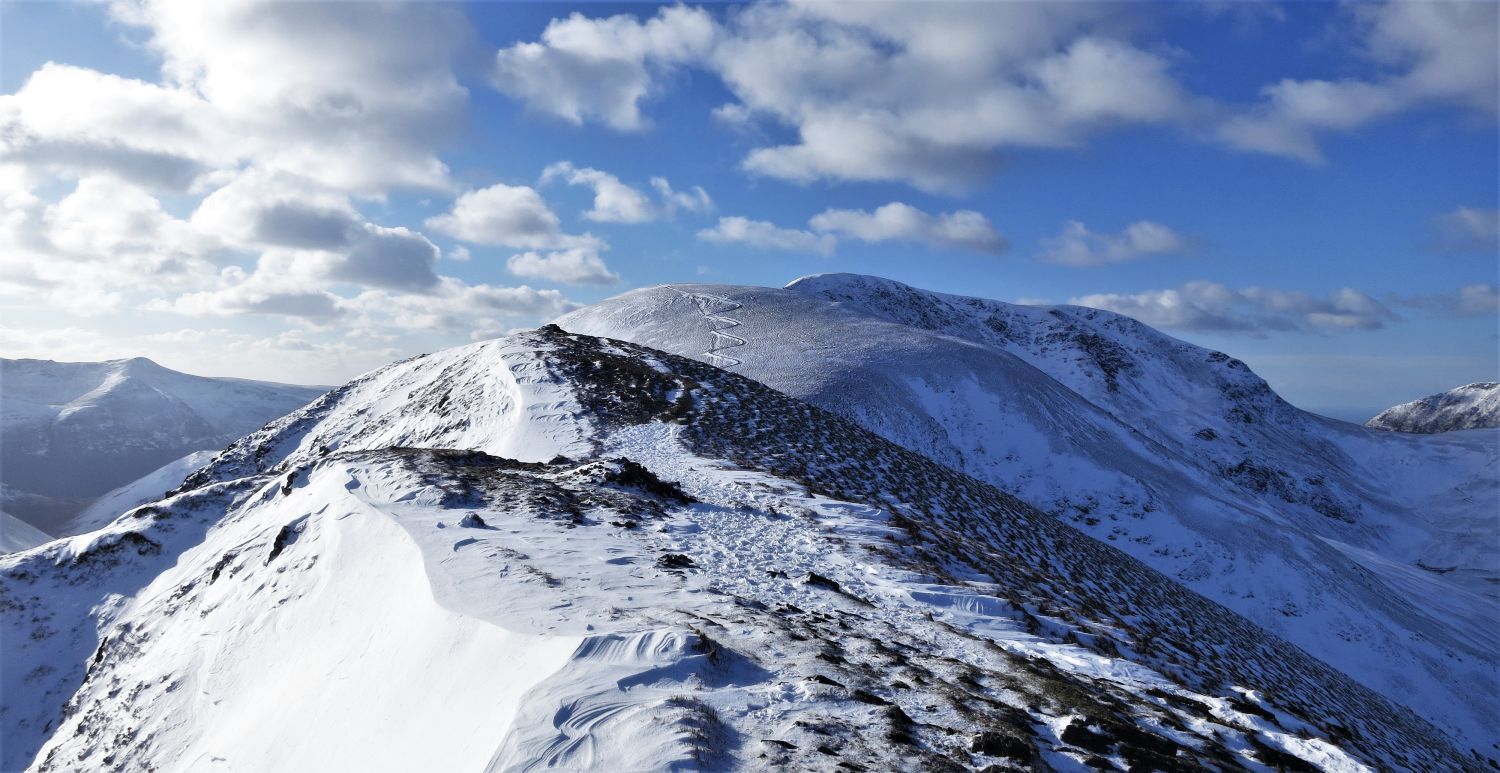 Scar Crags, Sail and Eel Crag from the ‘east ridge’

“It is generally more satisfying to climb a mountain from base to top than to hop onto the summit by a connecting ridge from another fell, and certainly by doing so a more detailed knowledge of its structure is gained. But the finest walking on the fells (as distinct from wandering and exploration, which give greater interest) is obtained by following linking ridges, even though the visits to the various summits en route are brief and superficial : one keeps high above the world, the views are extensive and ever changing, and distances are quickly covered.” Eel Crag 6
AW

“The view is good, but its detail is not so well composed as in the panorama from the neighbouring Causey Pike, while the advantage in altitude contributes little extra to the scene; in particular the valley and lake scenery between north and east is less satisfactory. The mountain picture is inspiring, however, especially to the south, and close by in the west the head of Coledale is very well displayed.” Scar Crags 4
AW

Looking back to Causey Pike from the summit of Scar Crags 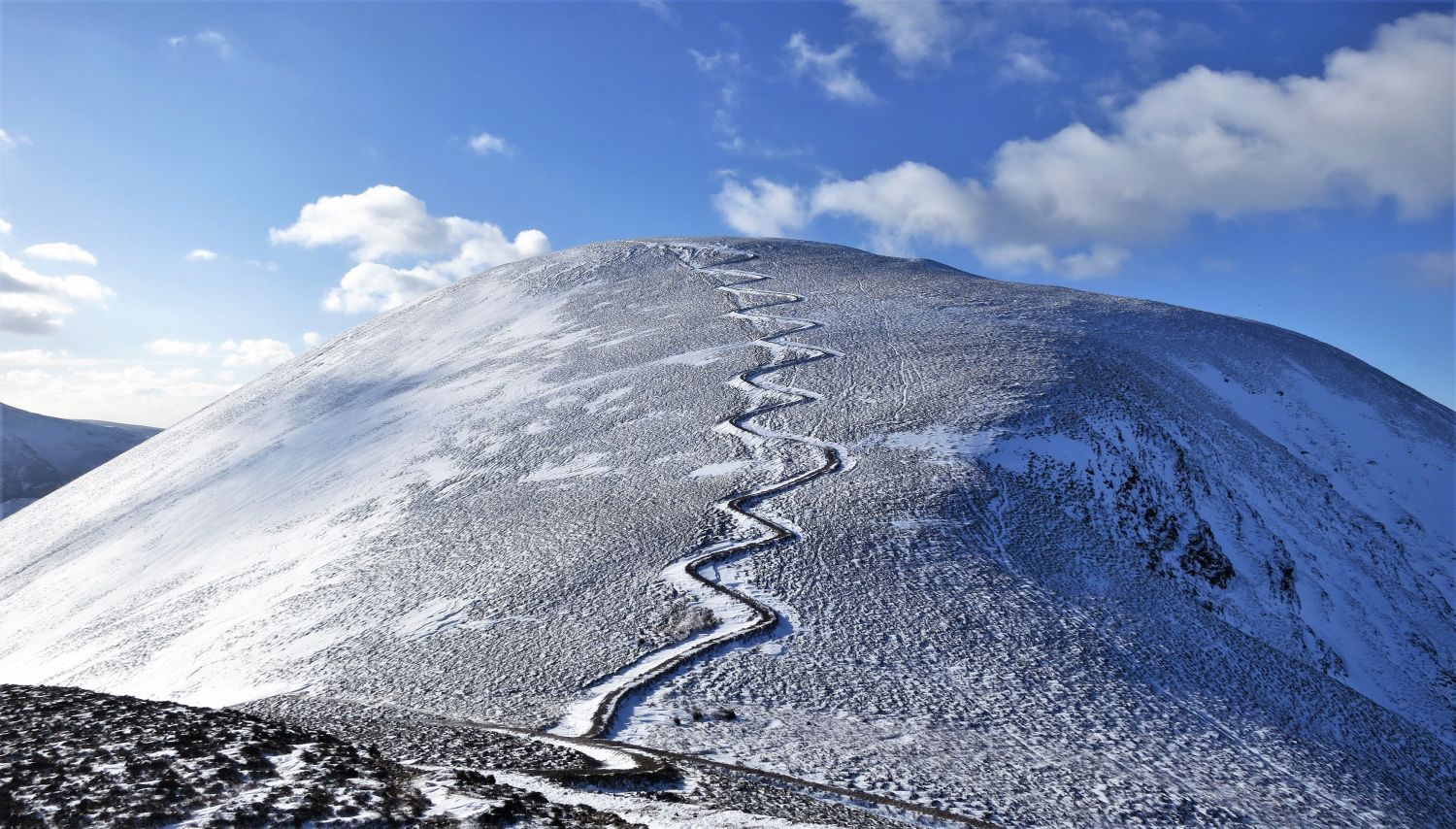 Sail from the descent to Sail Pass

After leaving the wonderful ridge of Scar Crags we head down to Sail Pass, however, the obtrusive look of the path on Sail’s east face dominates our view; thankfully we don’t have to climb it!

“Sail Pass is a name of convenience, adopted for the purposes of this book. There is no official name.” Sail 2
AW

The Eastern Fells over Derwent Water, from the summit of Outerside 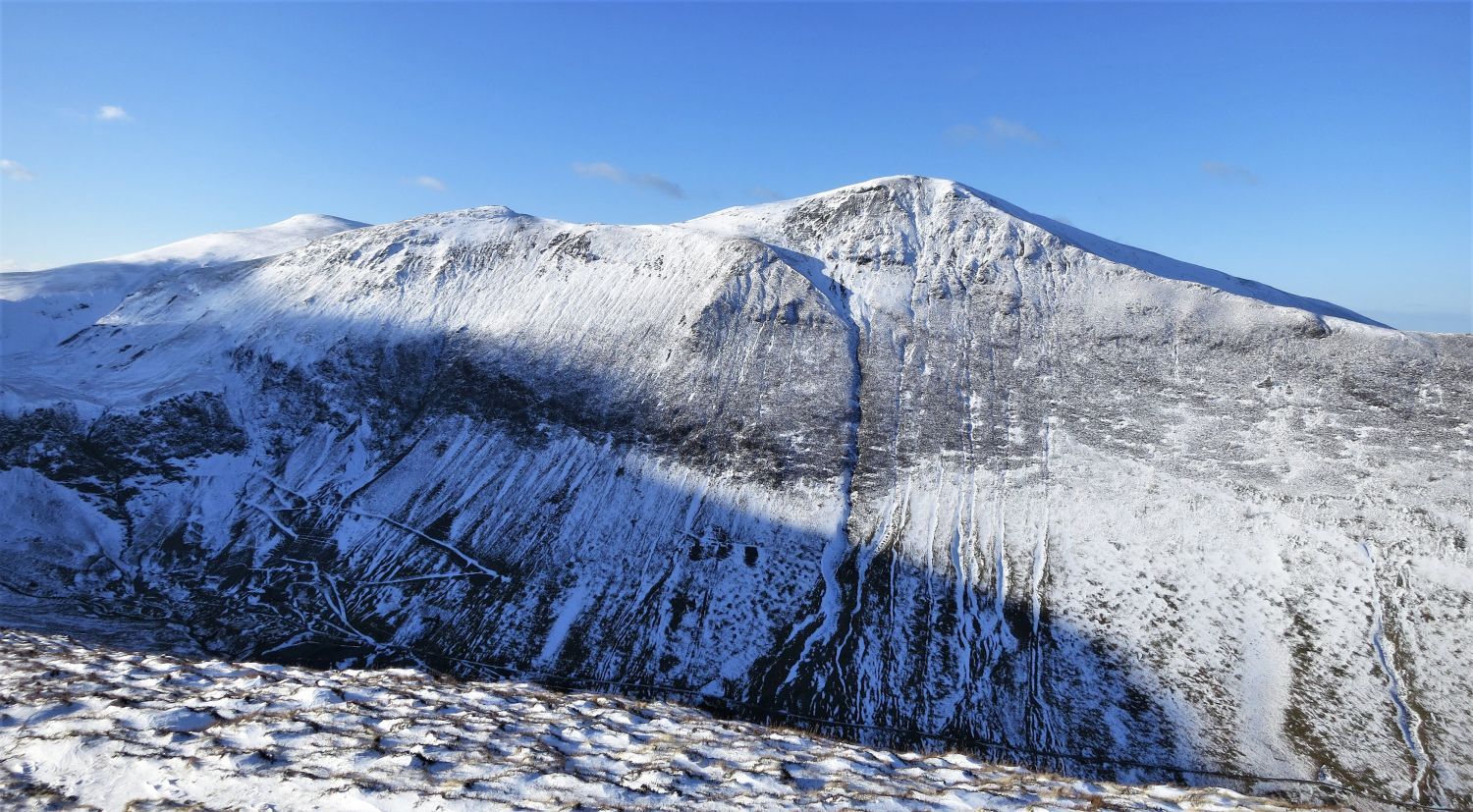 Grisedale Pike from the summit of Outerside

“Who dare tackle Grisedale Pike direct from the beck after seeing its 2000 feet of near-verticality from this viewpoint? Only the brave!” Outerside 7
AW

Braithwaite, Stile End and Barrow, from the descent of Outerside

Braithwaite is now in view as we descend down the ridge which includes the lower top of Stile End; this is a pleasant end to a superb day on the fells.

Looking back to Causey Pike and Scar Crags from Stile End