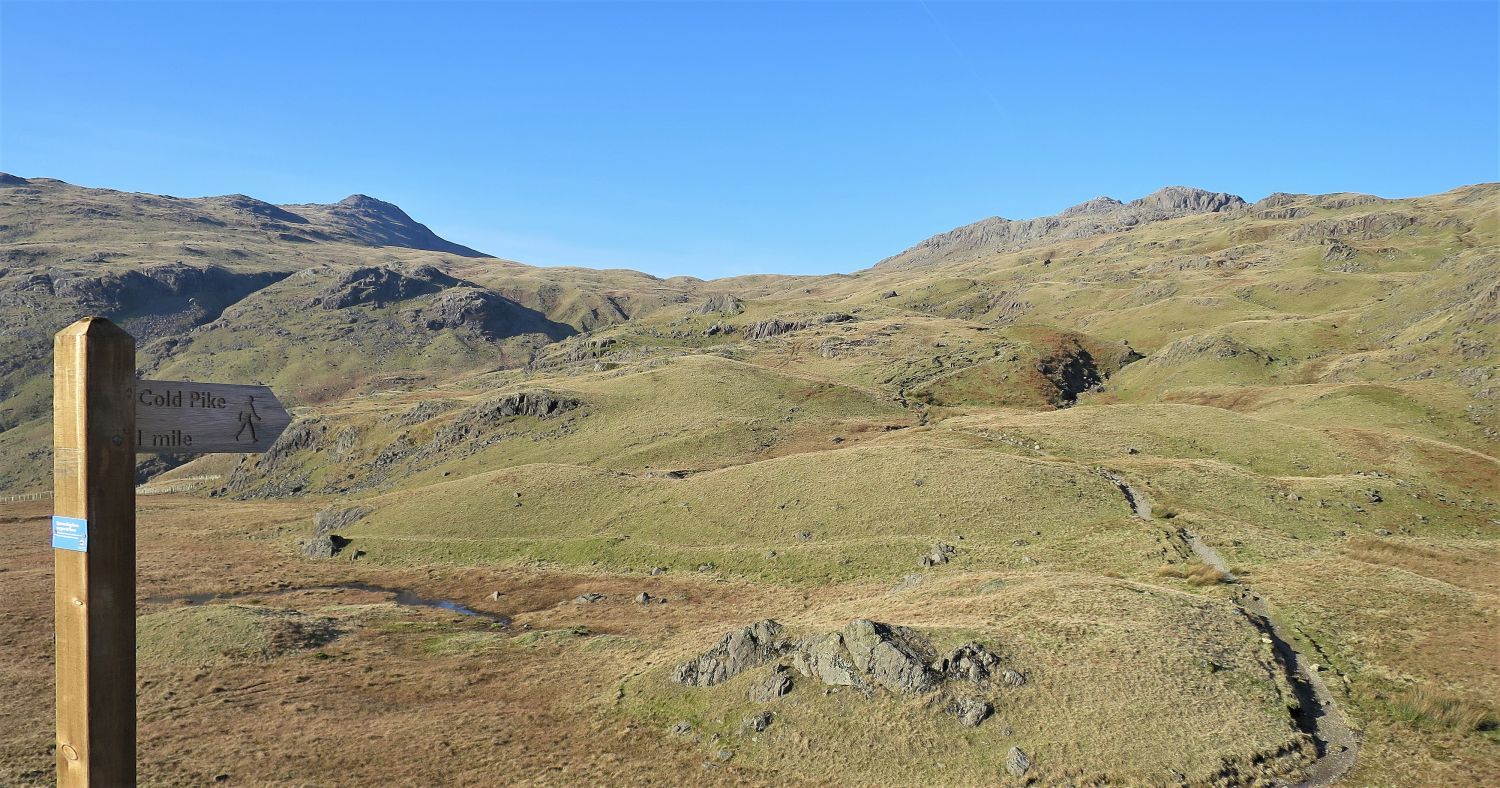 I wouldn’t normally add routes to the website that take the ‘easy’ option to reach the tops, but Cold Pike and Pike o’ Blisco from the summit of Wrynose Pass merits inclusion. There are many interesting features on the southern slopes of these two fells, including an unnamed tarn, a “grotesque” rock splinter, and a “detached” pinnacle. 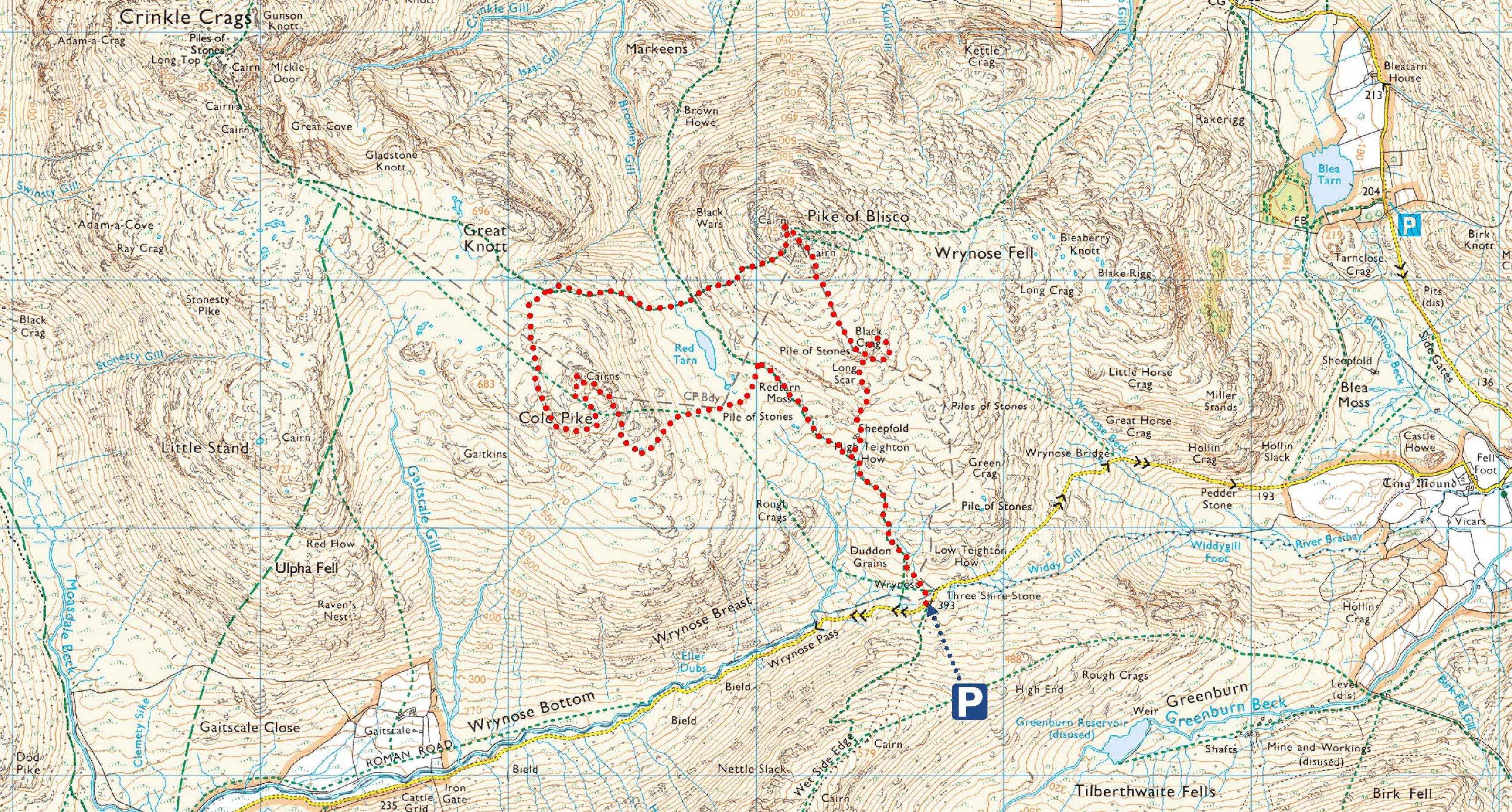 The depression between Cold Pike and Pike o’ Blisco is Redtarn Moss, which is our first destination after leaving Wrynose. 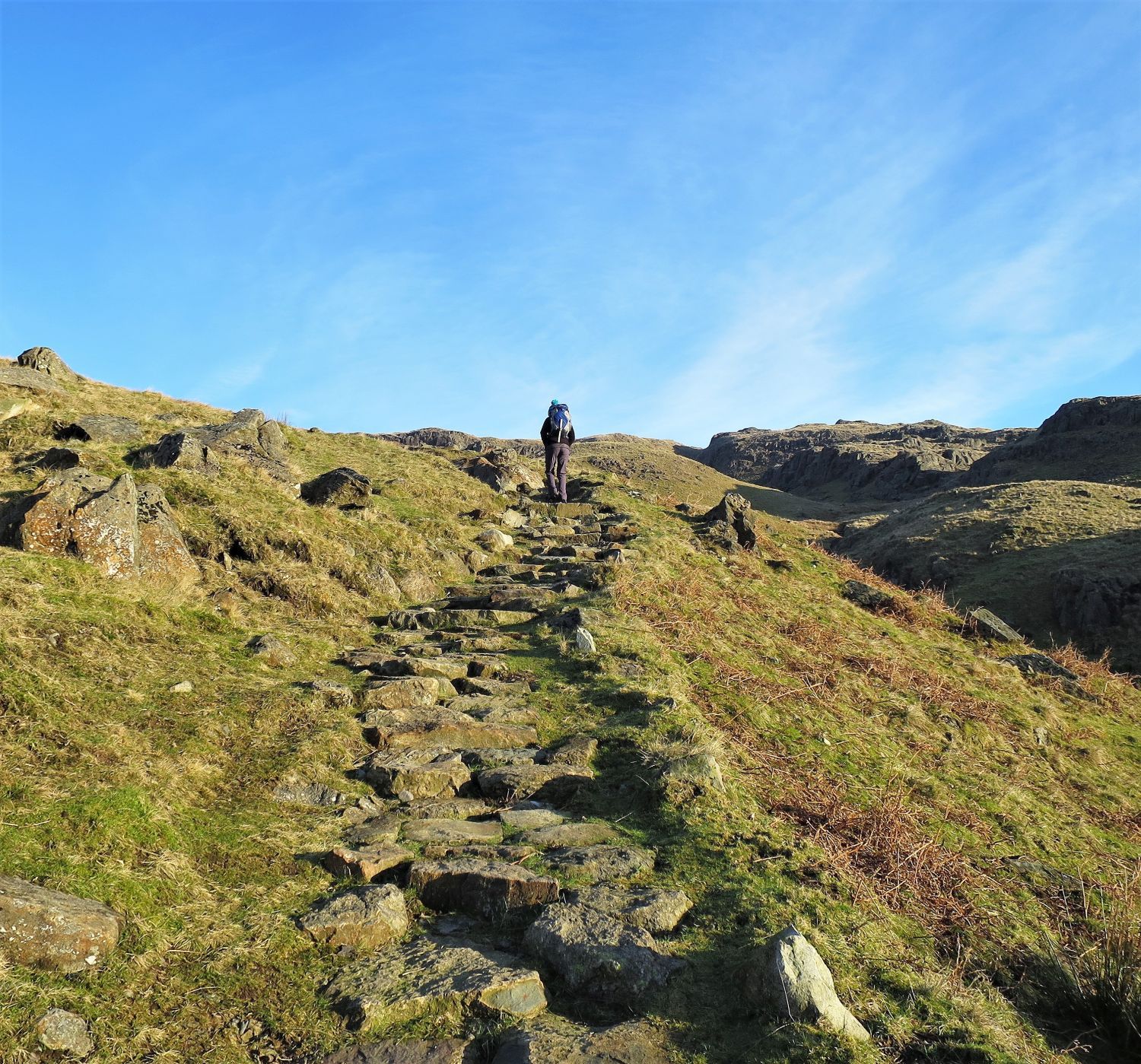 Fantastic path restoration! Over the years there’s been much path repair along this route, and there are three great examples of stone pitching to look out for: here on the approach to High Teighton How, at the head of Browney Gill, and on the ascent of Pike o’ Blisco from Redtarn Moss. 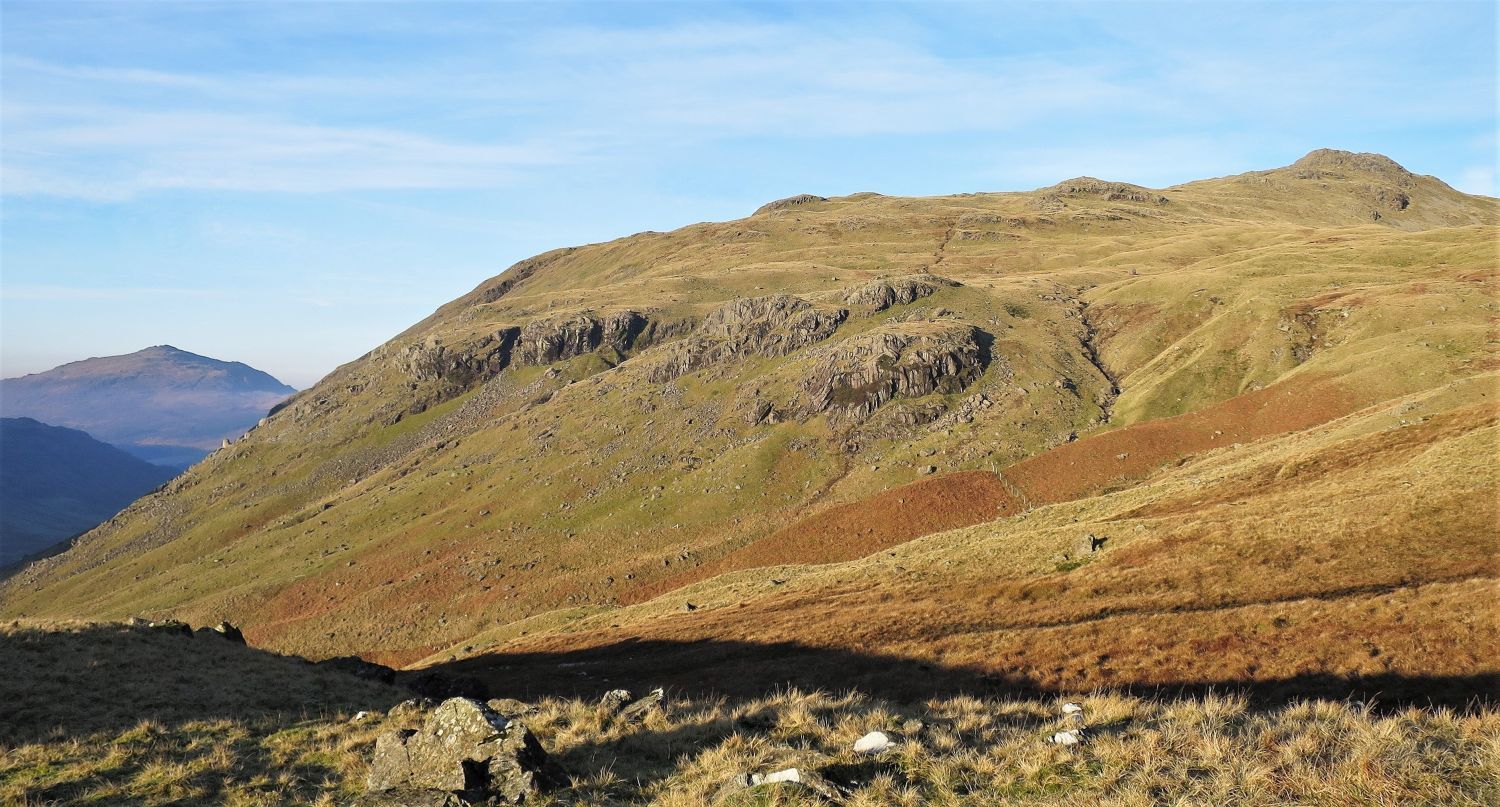 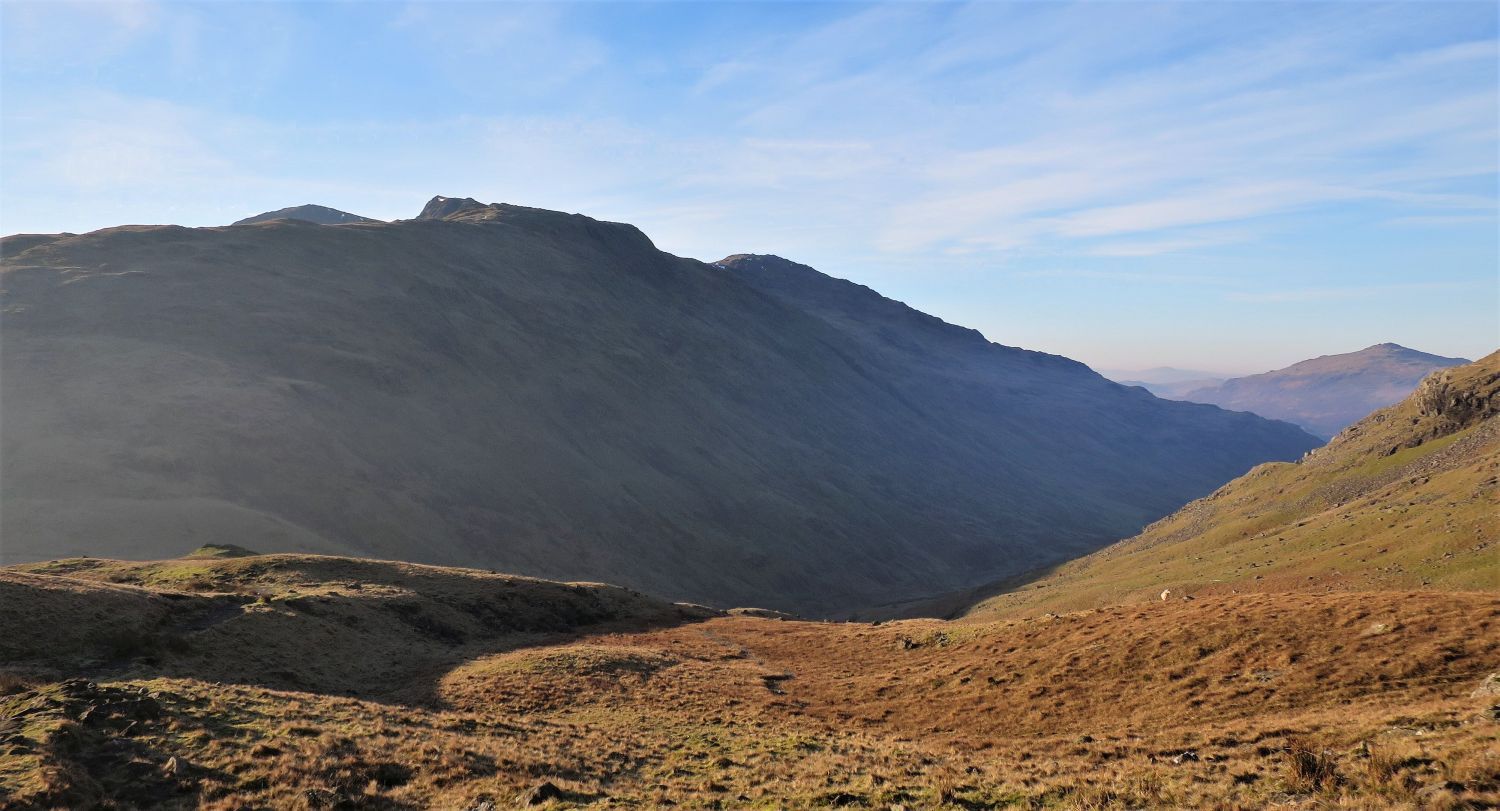 Looking back towards Swirl How, Great Carrs and Great Friar 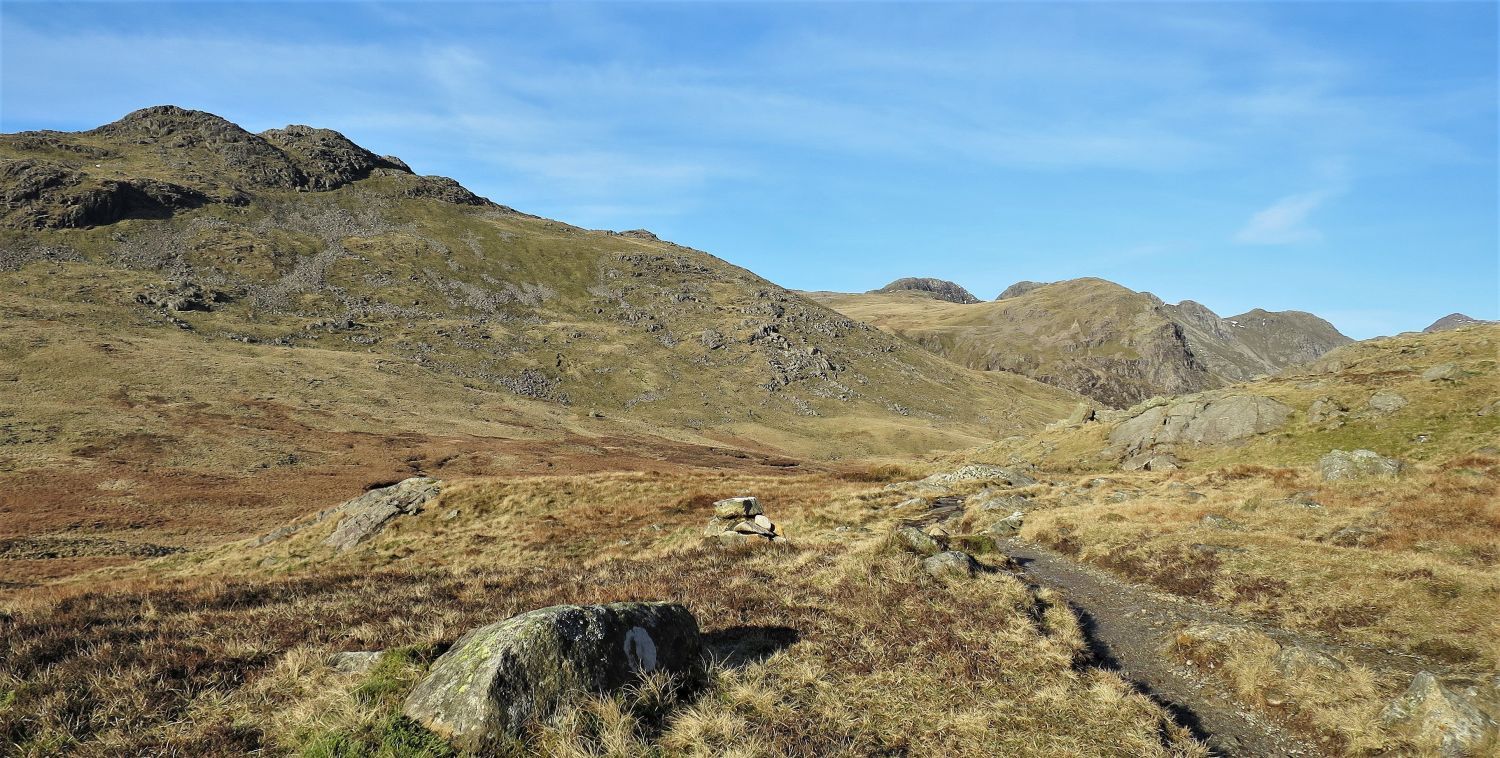 Cold Pike (left) from the approach to Redtarn Moss

When the path approaches its highest point above Redtarn Moss, just before Red Tarn comes into view, a marker cairn on the left directs the way off the main route and towards the south-east ridge of Cold Pike. Here, we gain our first view of Crinkle Crags, Bowfell and Great Knott over the depression of Redtarn Moss, and the three rocky tops of Cold Pike are just recognizable. 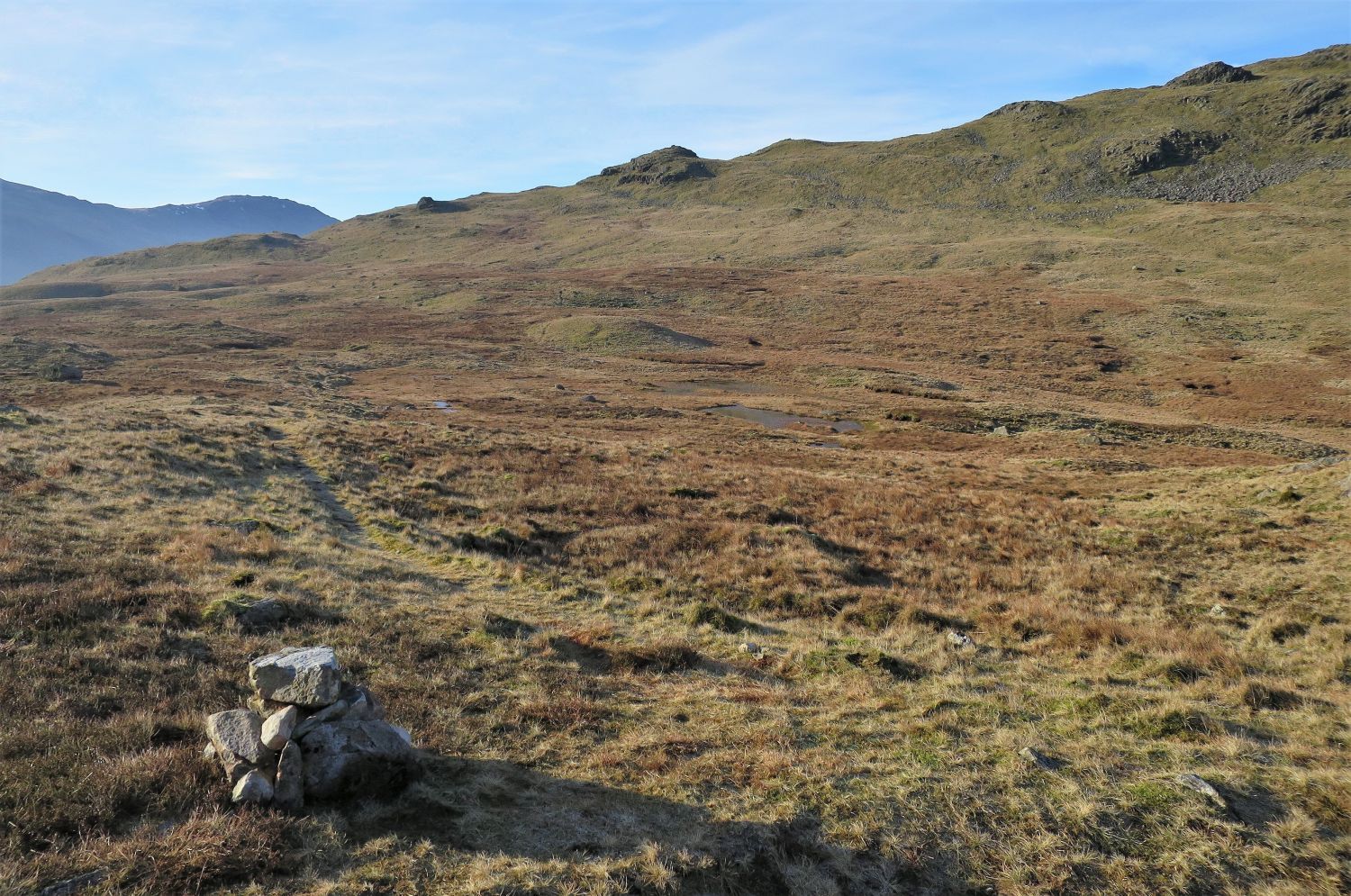 The path leading to the south-east ridge of Cold Pike

The not so well defined path curves its way around the head of Redtarn Moss towards the south-east ridge of Cold Pike, and avoids the wet areas including two small unnamed tarns. The cairn is a good marker…..well, it will be, we rebuilt it!

Beyond the unnamed tarns, Red Tarn appears at the base of the depression between the slopes of Cold Pike and Pike o’ Blisco.

“…..a concave eastern slope descends to the desolate upland hollow containing Red Tarn, so named from the rich colour of the shaly subsoil.” Cold Pike 1
AW 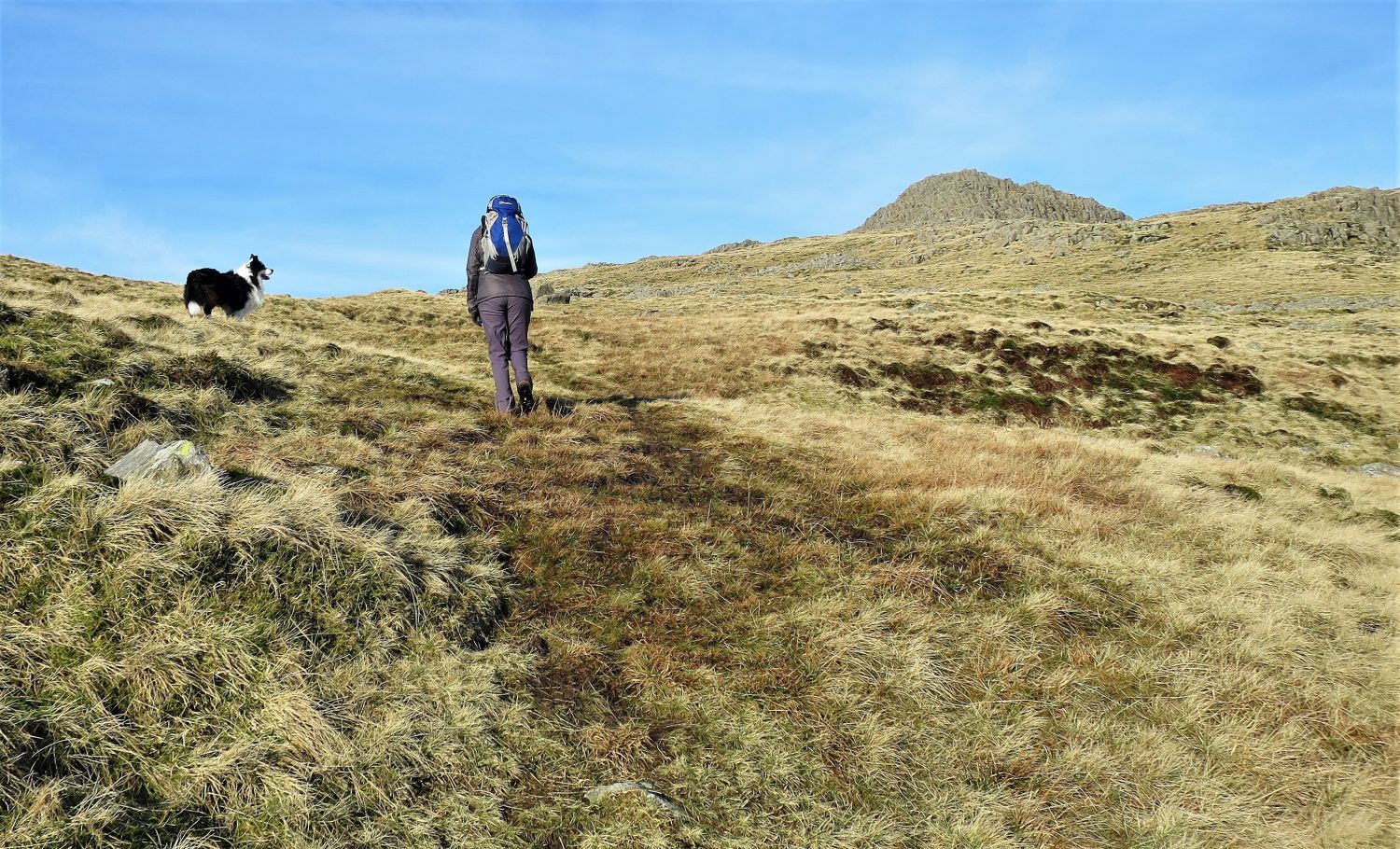 Here, Cold Pike’s south-east summit appears over the ridge. The ridge is quite broad, but the route to the summit is without doubt; this is a lovely approach.

“The true south ridge of Crinkle Crags follows the compass bearing to end in a long steep descent to Cockley Beck, but a spur running off south-east is more usually considered to continue the main spine of the mountain.” Cold Pike 1
AW 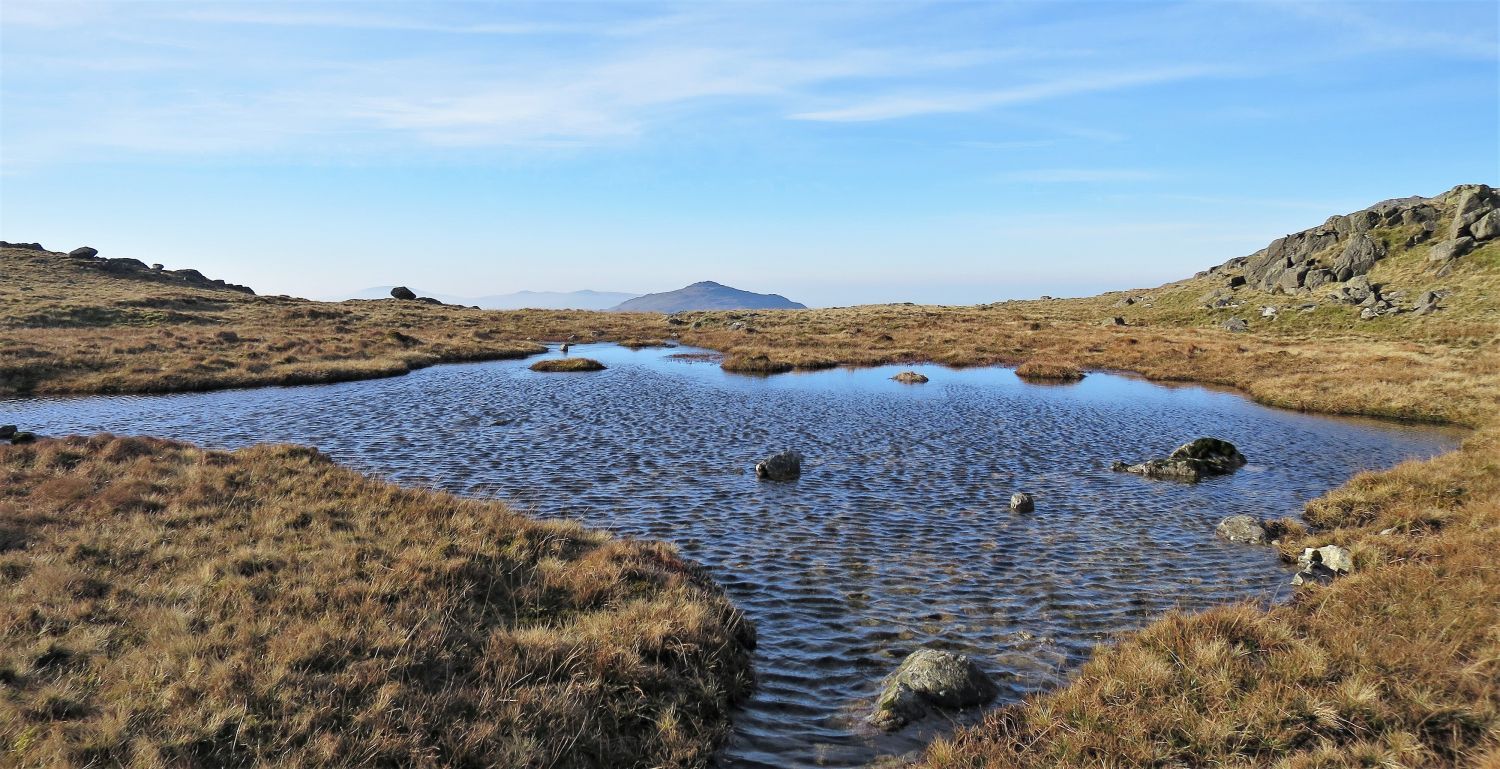 As soon as you arrive onto the broad south-east ridge, the path curves right to head for the summit. At that bend, this unnamed tarn can be easily missed; it’s a wonderful tarn to walk around. 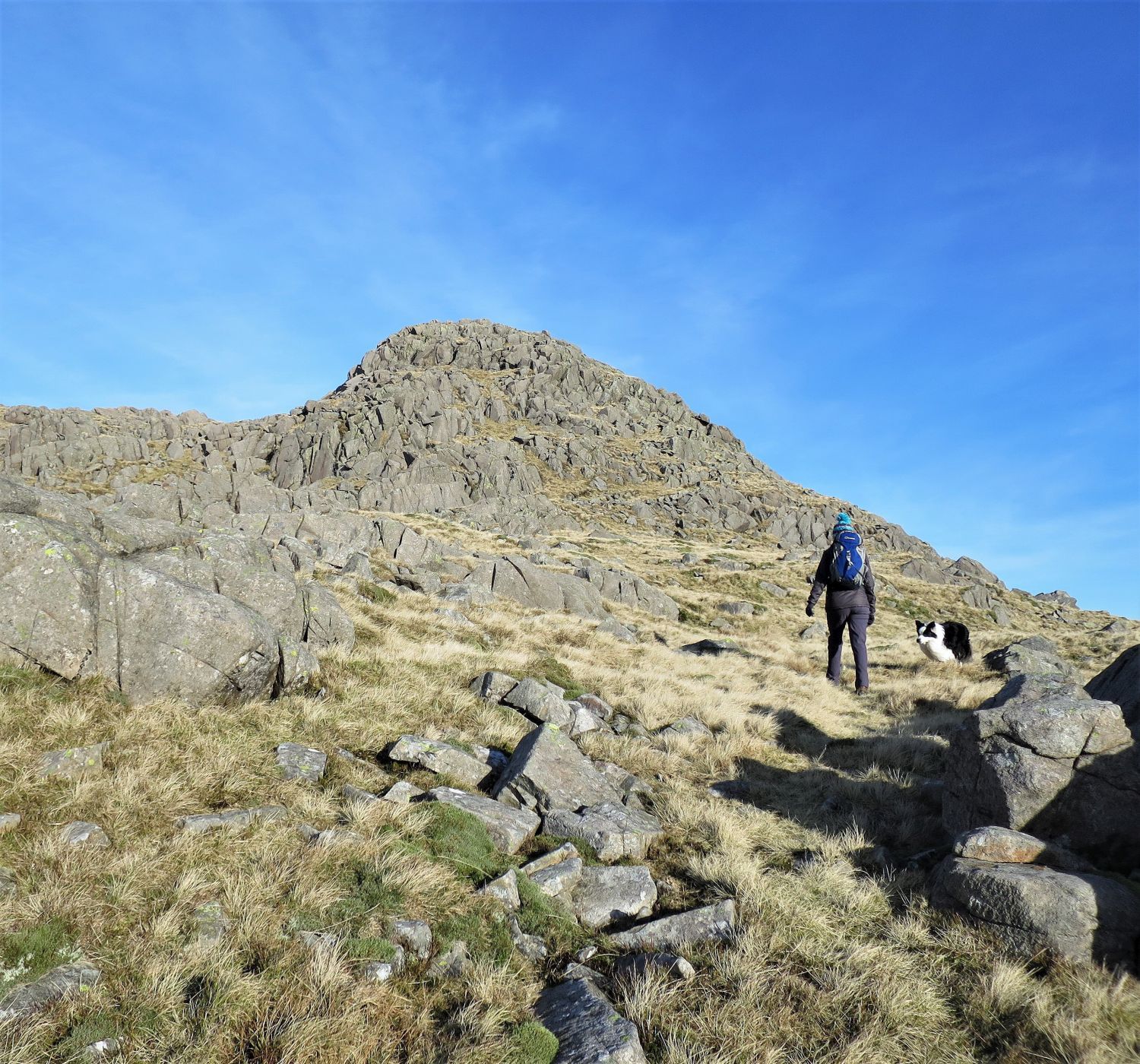 Here, the choice is yours; this is a pathless playground for the fellwalker and scrambler.

The Langdale Pikes from the south-east summit of Cold Pike, with Pike o’ Blisco (right)

The Coniston Fells over the south-east summit, from the east summit of Cold Pike

The rocky plateau of the east summit is just a short distance away from the south-east summit. On these two lower plateaus, the cairns probably come and go more often than people.

Sadly, any photos taken towards the south are poor due to haze or glare. 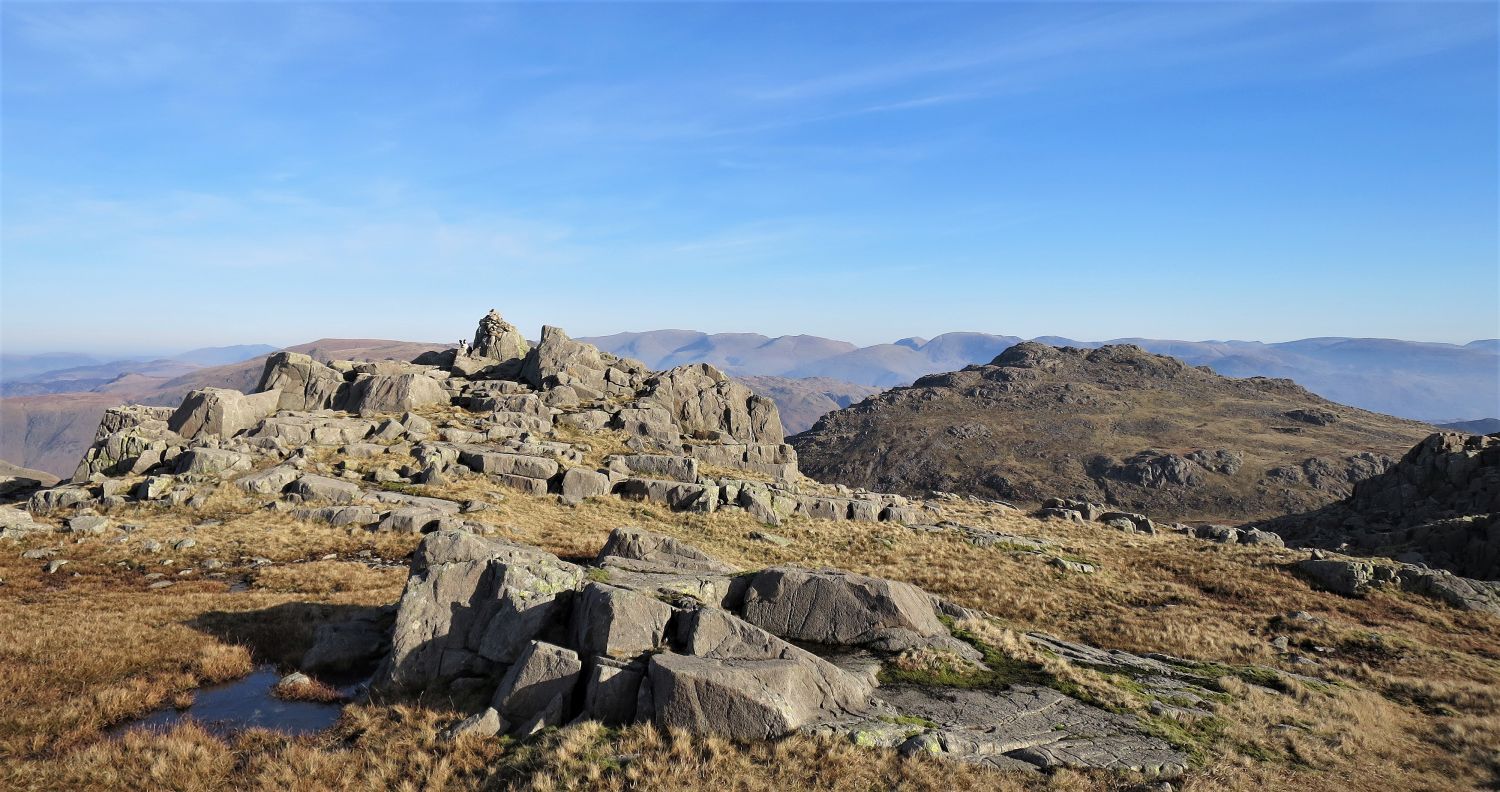 Spot the dog! Whenever I leave my rucksack to wander and take photos, Frankie will not leave it; maybe it’s a pork pie thing?
The true (north-west) summit of Cold Pike has a much larger cairn perched on its rocky plateau, and the views from there are splendid.

“All around, nearby, are higher fells, and they may be studied profitably from the triple peaks of this lowly one in their midst.” Cold Pike 1
AW

Looking across to the east and south-east summits of Cold Pike, with Pike o’ Blisco (left) 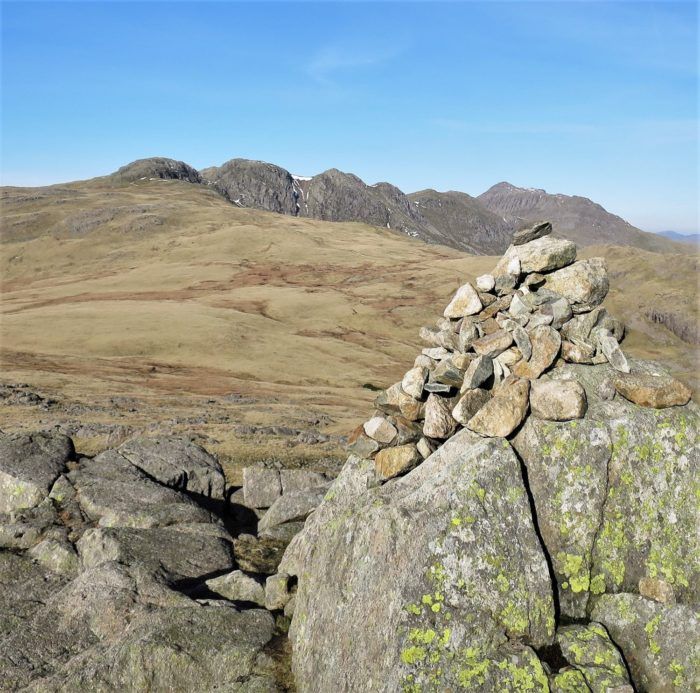 I love this view of Crinkle Crags and Bowfell from the north-west summit.

“The summit is the best part of the fell. It consists of three rocky humps, each with a cairn and sprinkled with boulders, descending in altitude from north-west to south-east, and strongly reminiscent, on a small scale, of Crinkle Crags, of which they are strictly a continuation. The principal cairn stands on a pleasant rock platform.” Cold Pike 3
AW

We now take a detour to the ‘Cold Pike Tooth’. 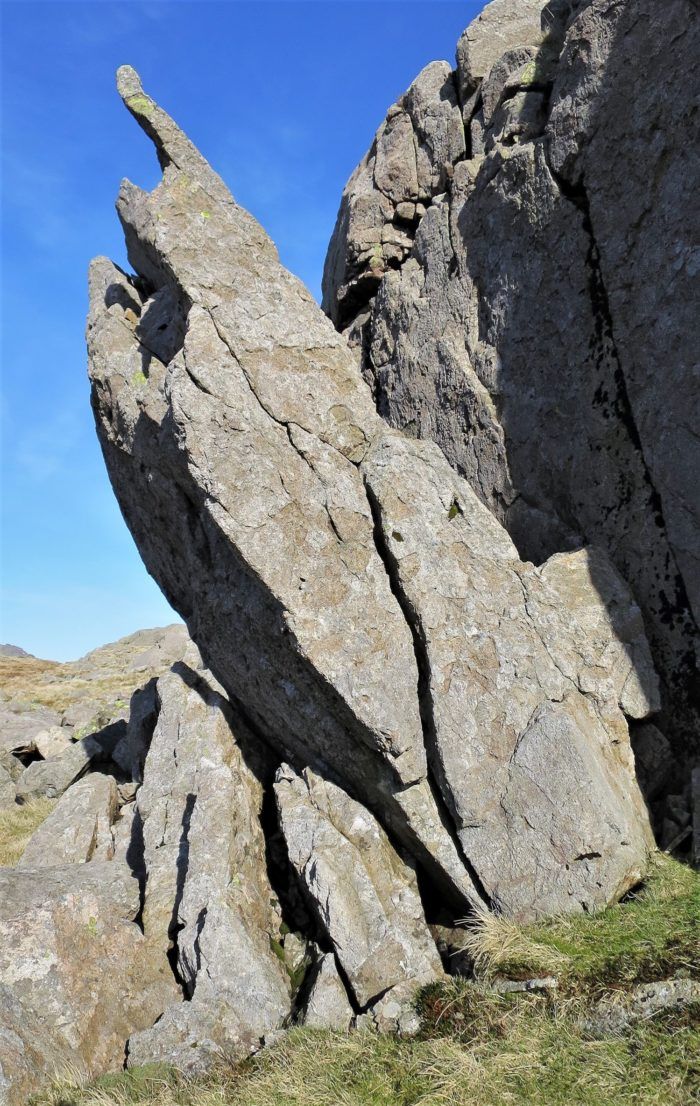 “Below the crag west of the summit are many mammoth boulders and one grotesque 12-foot fanged splinter. An appropriate name for it would be Cold Pike Tooth. Try to locate it!” Cold Pike 2
AW

Having visited the ‘Cold Pike Tooth’ we now contour around the west of the summit crags and take a pathless route towards the head of Browney Gill; this is a lovely approach.

We now join the popular Crinkle Crags path that ascends from Great Langdale via Brown How, and follow it to Redtarn Moss before the ascent of Pike o’ Blisco. There has been much path restoration in this area, including some fantastic stone pitching; well done all involved! 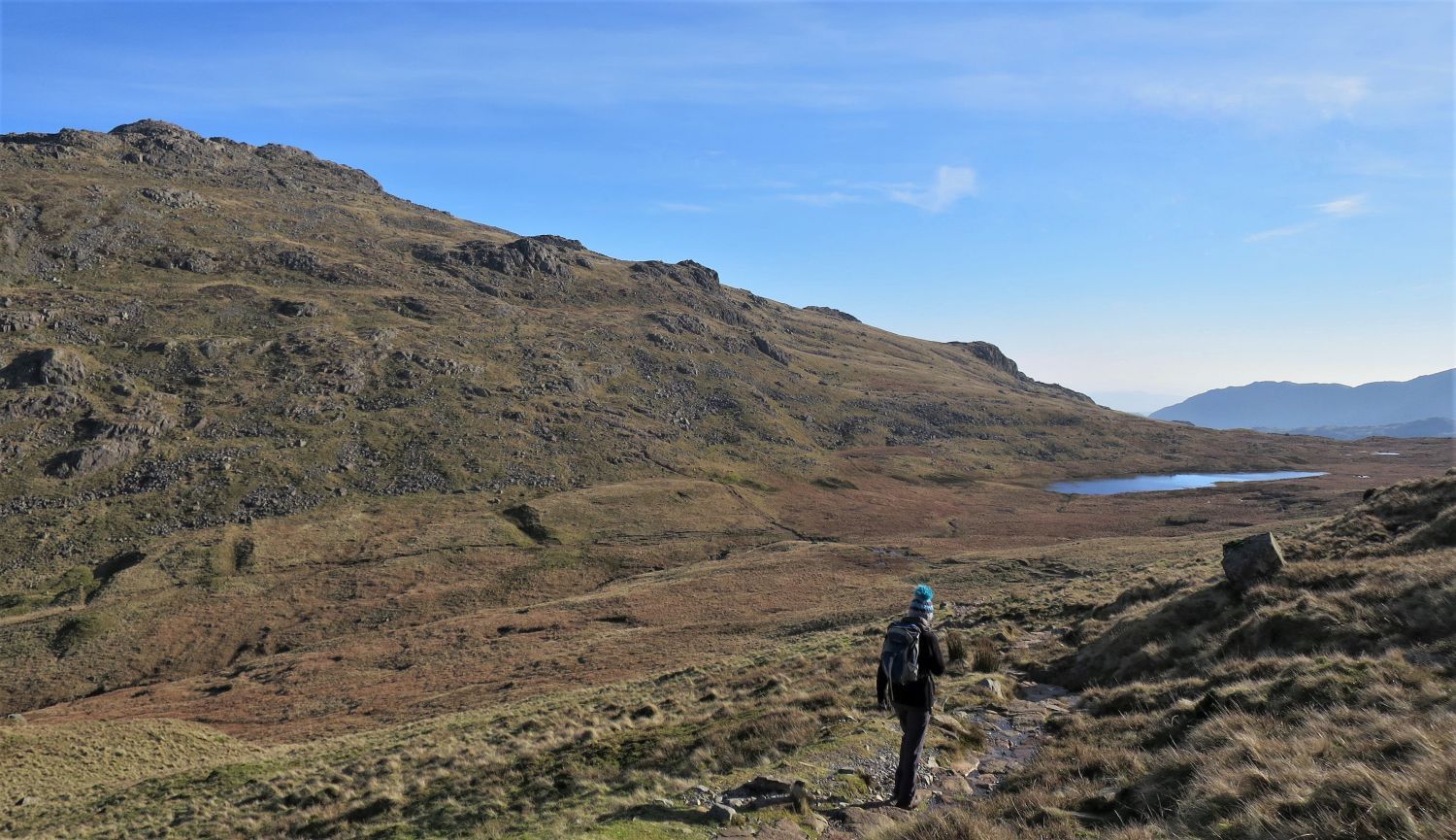 The path now curves its way into the depression of Redtarn Moss. Here, the ascent path of Pike o’ Blisco can be seen ahead. 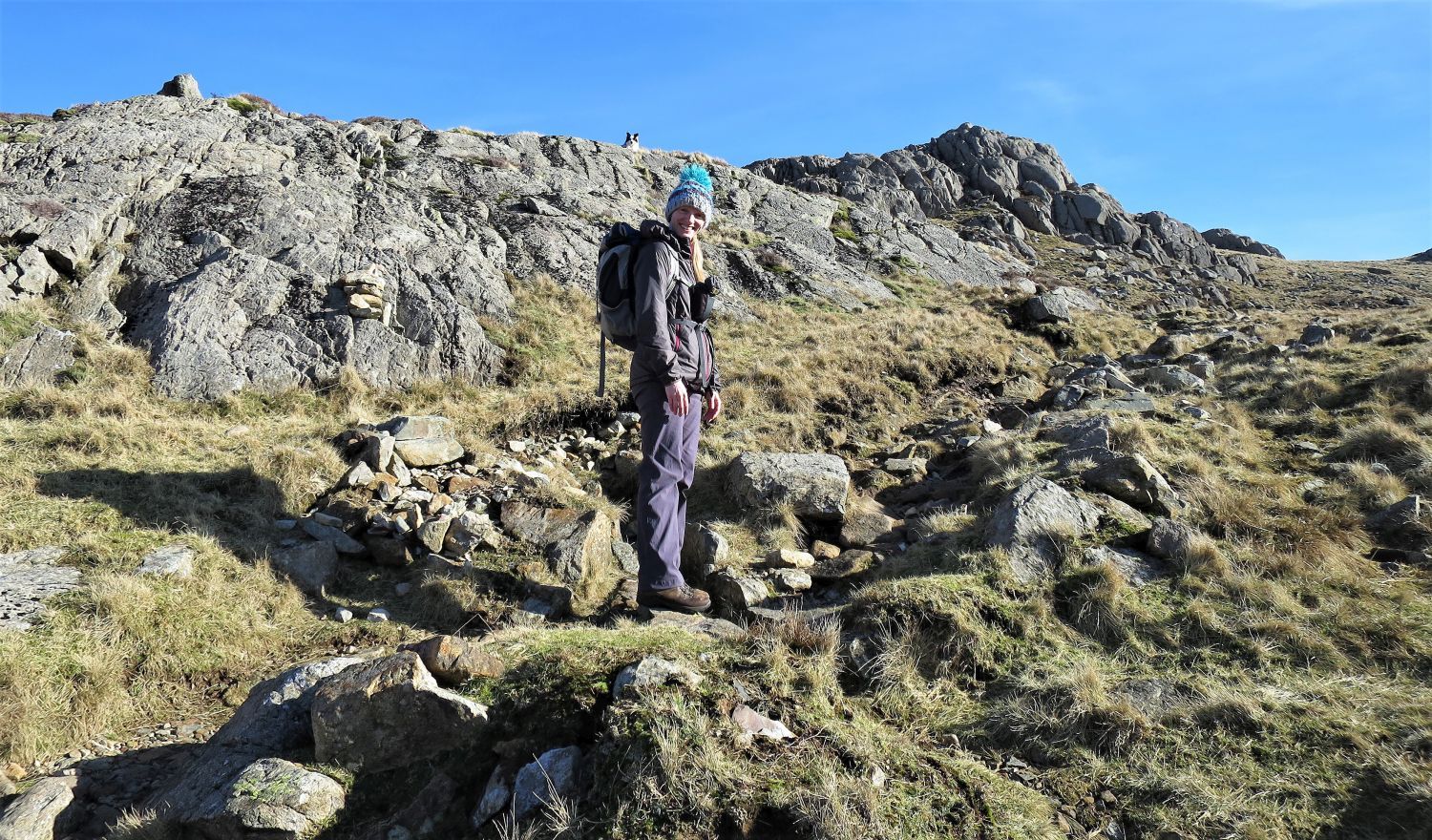 Jaclyn and Frankie on the ascent of Pike o’ Blisco

More fantastic stone pitching on the path that ascends from Redtarn Moss to the summit of Pike o’ Blisco.

The upper western branch of Browney Gill and Great Knott can be seen on the left.

“Although not of great significance, Cold Pike is prominent when seen from the north and east…..Cold Pike is a Crinkle Crags in miniature.” Cold Pike 1
AW 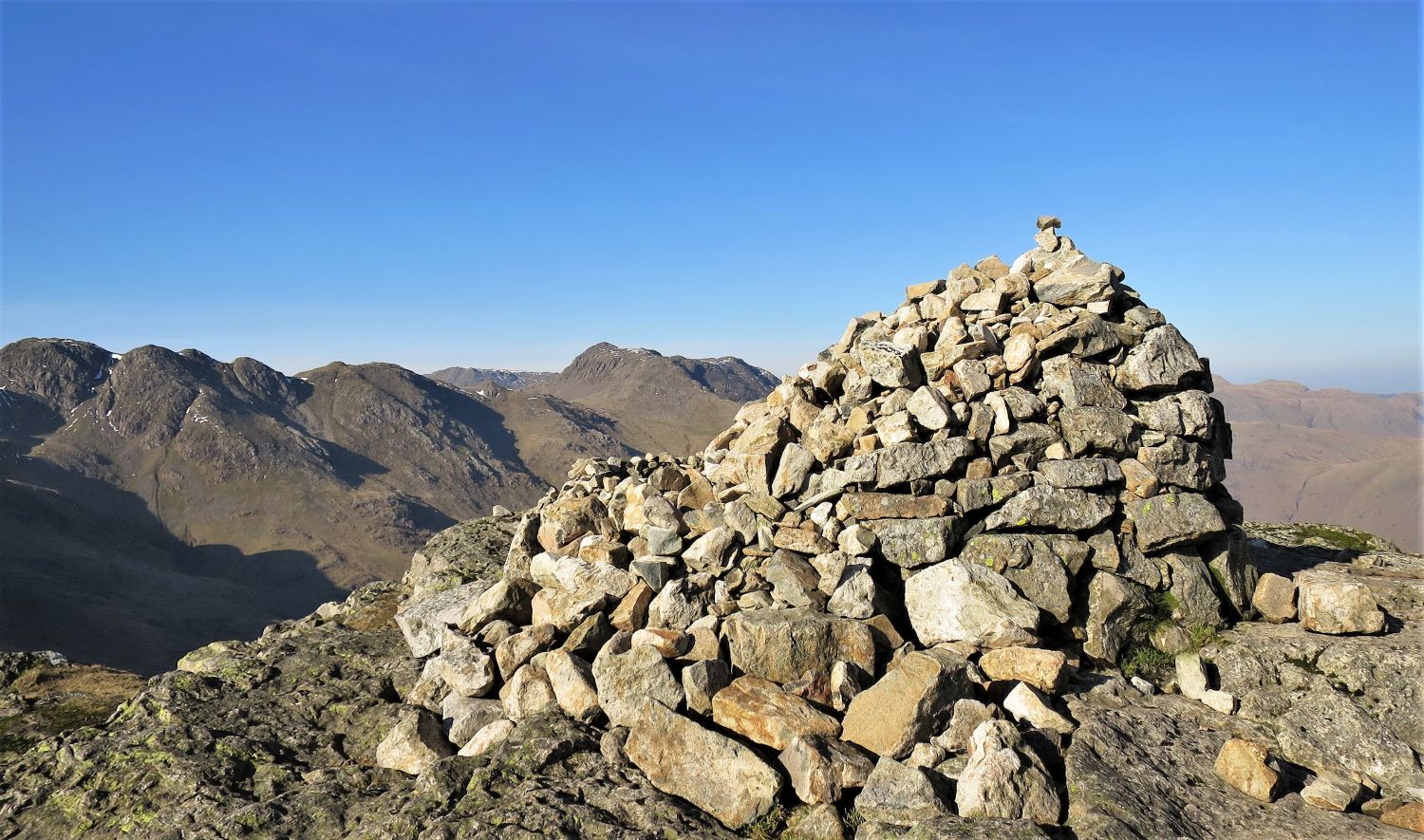 “This is a beautiful ‘top’, and a colourful one, with pinky-grey rocks outcropping everywhere from dark heather and green mosses. The main cairn is a shapely edifice, gloriously situated on a platform of naked rock at the north-western terminus of a summit ridge 100 yards long.” Pike o’ Blisco 9
AW 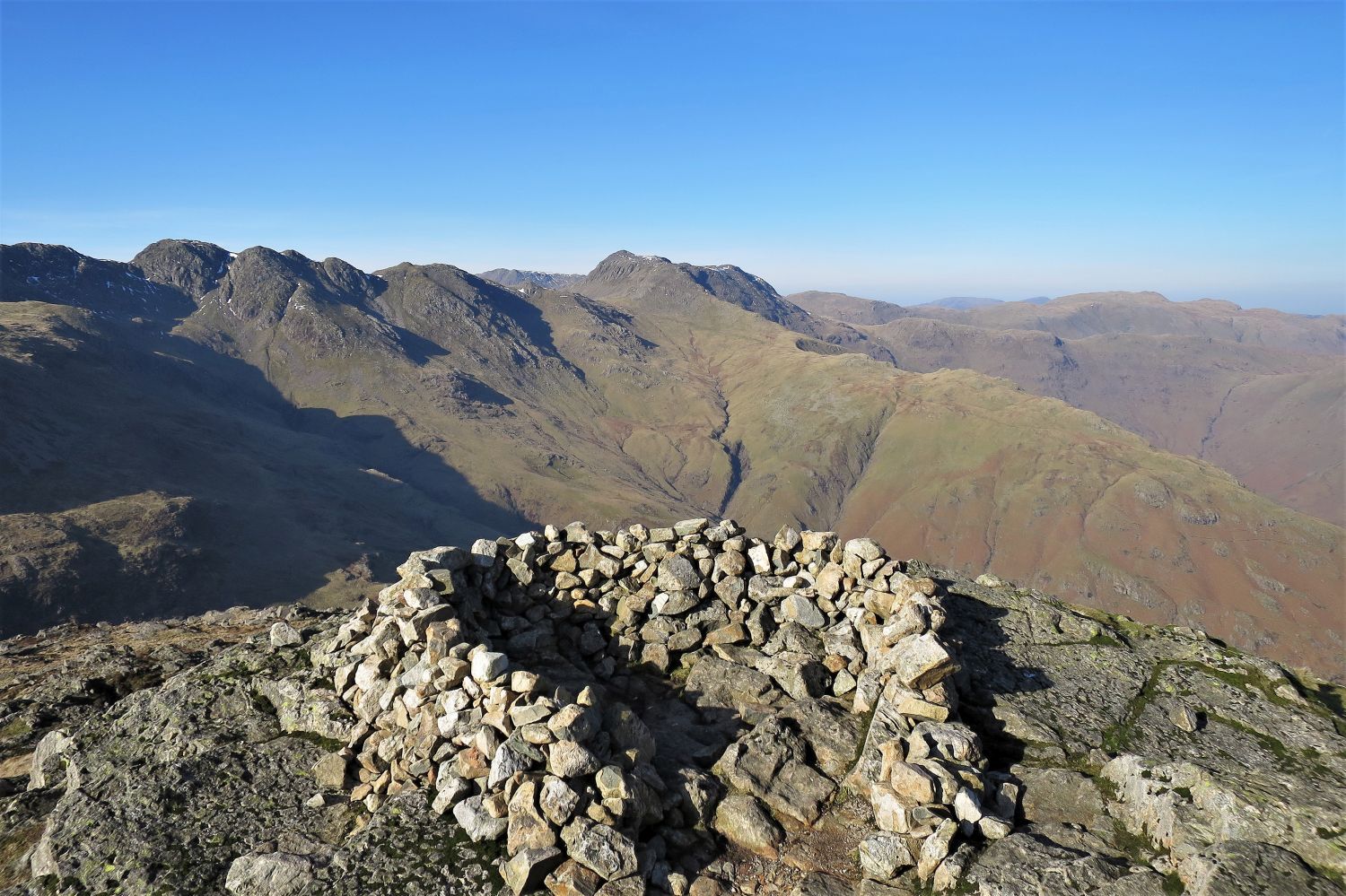 Crinkle Crags and Bowfell from the summit shelter

“…..here the distant views, from Skiddaw round to the Kentmere fells, are certainly good. At close quarters, however, are Bowfell and Crinkle Crags, displaying their features to such effect that they will win most attention.” Pike o’ Blisco 10
AW 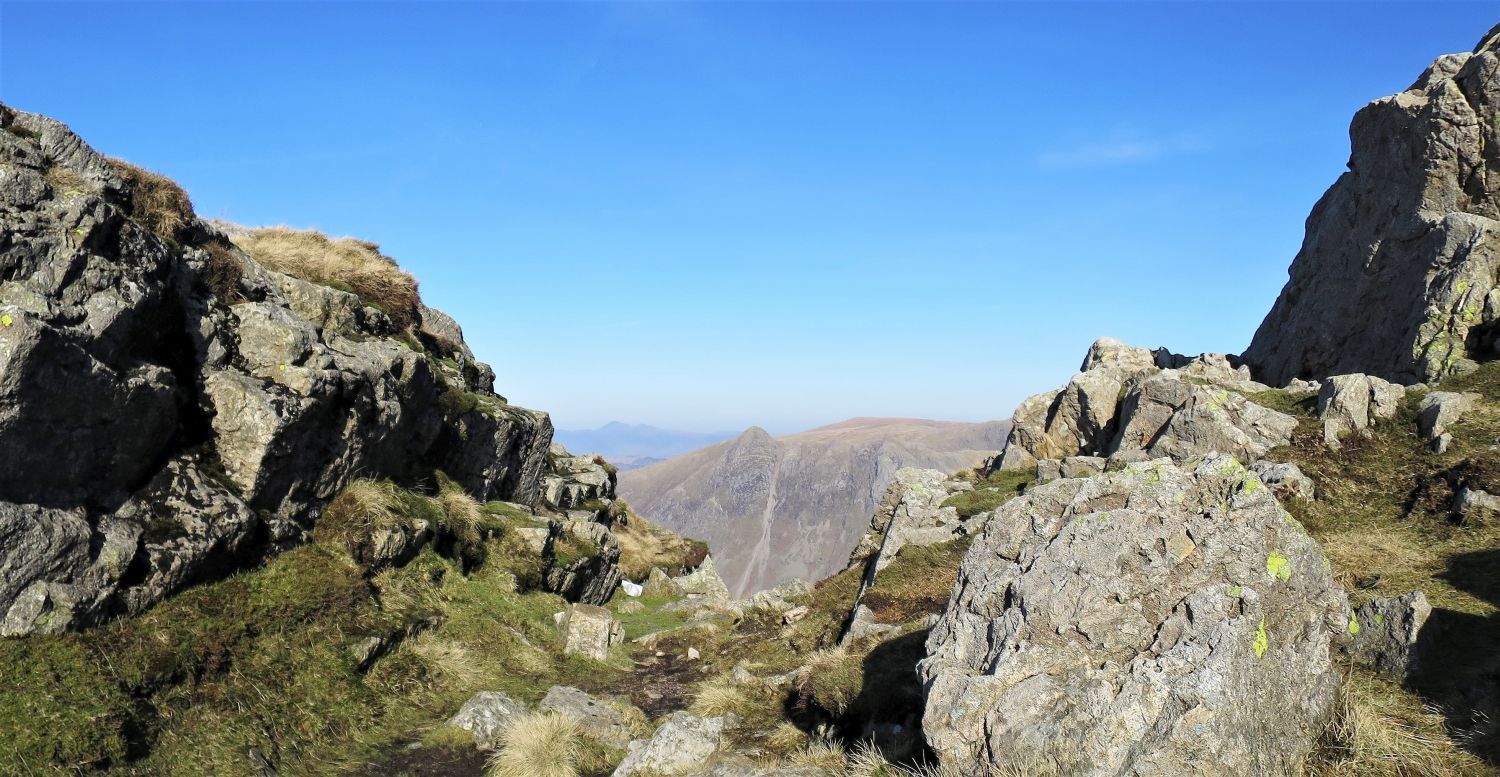 Looking back to the main summit from the south-east cairn

“At the south-east extremity is another cairn, less imposing; this too crowns a craggy pyramid.” Pike o’ Blisco 9
AW

From the south-east top, we head down the southern face to the isolated rocky escarpment of Black Crag. Initially, the route is pathless over rocky terraces, but a path appears lower down which then leads all the way to Black Crag. 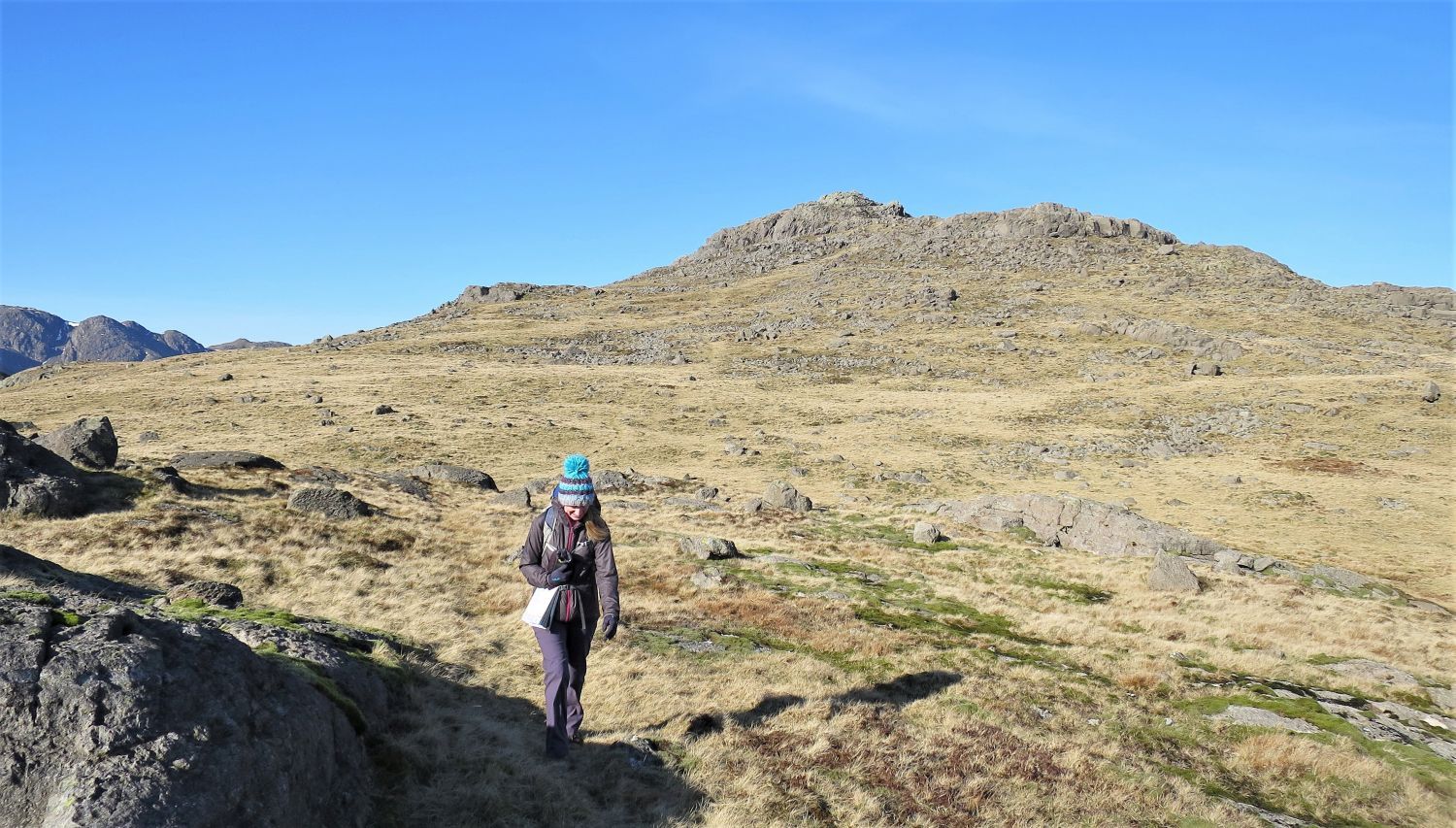 Looking back to the south-east top of Pike o’ Blisco

Looking across to Long Crag, Bleaberry Knott and Blake Rigg from the summit of Black Crag

Pike o’ Blisco from the summit of Black Crag 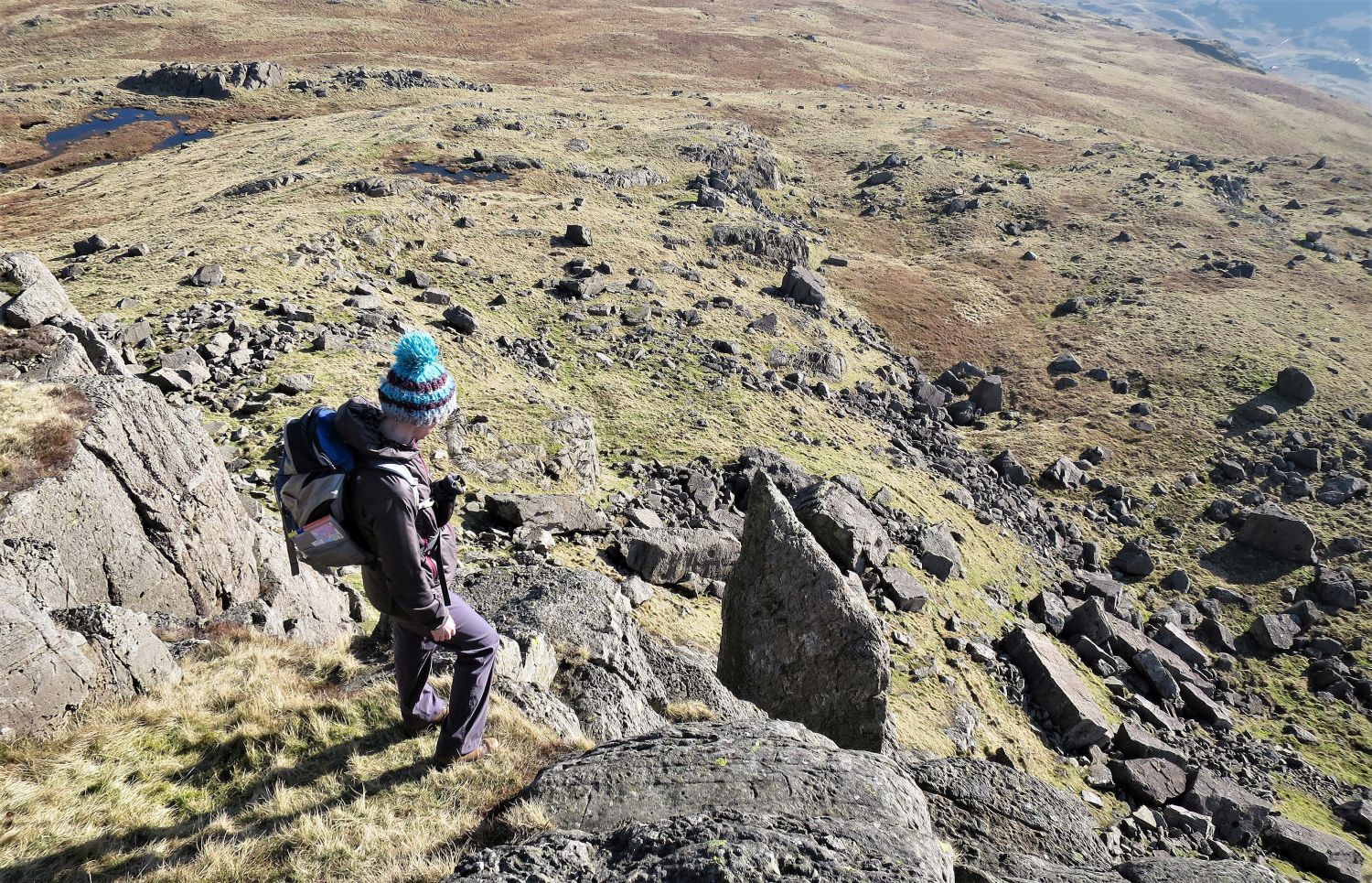 Looking down to ‘The Needle’

From the summit plateau, take a moment to visit the tip of ‘The Needle’. A series of rock terraces lead to the edge of the escapement, but please take care, a steep drop awaits clumsiness, and should only be attempted in dry conditions.

“It seems (to a novice who hasn’t tried) that the tip may be gained by ‘bridging’ the gap with the main crag. He will be a good man who can stand erect on the point of the needle.” Pike o’ Blisco 8
AW

To be safe, retrace your steps back to the summit plateau, and then take a wide route (either left or right) around the escarpment to reach the base of the crag and ‘The Needle’. 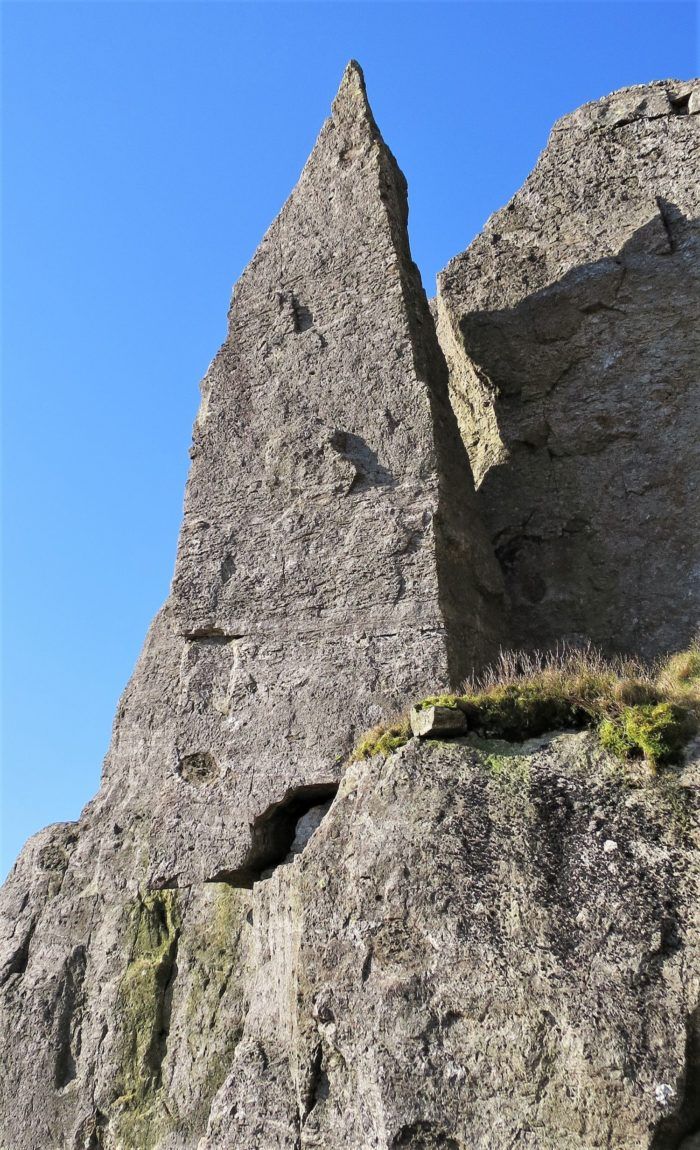 “This smooth and slender pinnacle, detached from the face of Black Crag, is precariously balanced on a massive plinth of rock, 12 ft high, the total height to the tip being 35 ft…..The author feels rather proud of this ‘discovery’ and hopes people will not write to claim (i) a knowledge of the pinnacle (since they were children), (ii) that they have climbed it (blindfolded), and (iii) stood for hours on its point (on their heads).” Pike o’ Blisco 8
AW 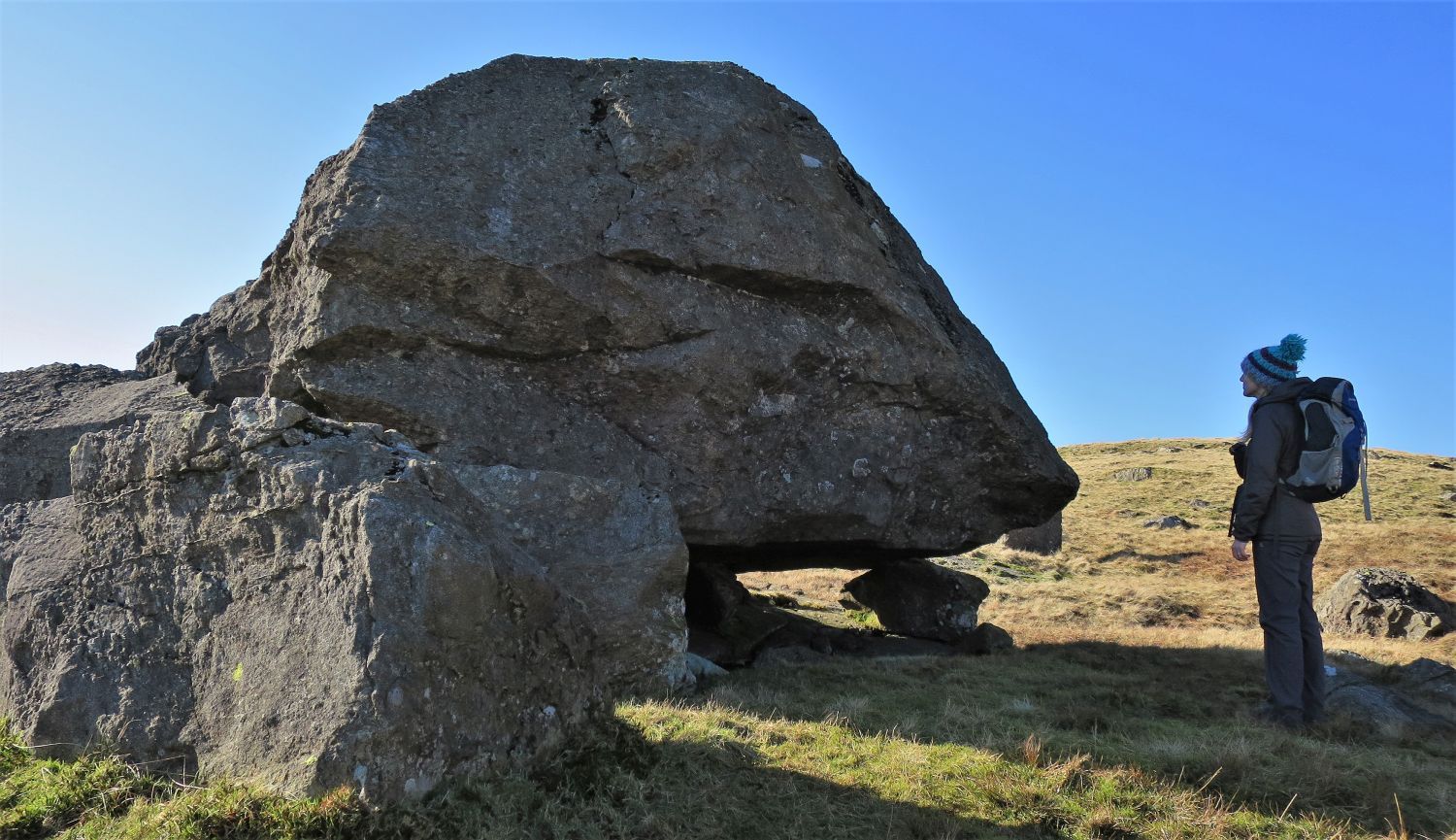 Even though this large boulder is near the base of Black Crag, it hasn’t simply fallen off the crag face, and instead is resting and perched on a small boulder by glacial ice.

Looking across to Cold Pike (left) from below Long Scar (right)

Long Scar, like Black Crag, is a popular climbing area.

Another erratic boulder can be found above High Teighton How. This one had rested in an upright position, and at some point a sheepfold was built in its shadow.

For its entire length of about 27 miles, from its source at Duddon Grains to the Irish Sea at Duddon Sands, the River Duddon formed the boundary between the historic counties of Lancashire and Cumberland. Since local government re-organisation in 1974 the River Duddon has been in the county of Cumbria.

The ‘Three Shire Stone’, which stood near the highest point of Wrynose Pass, was a boundary stone that marked the location where the historic English counties of Lancashire, Cumberland and Westmorland met. The limestone monolith was cut in Cartmel, Lancashire in 1816 for the Furness roadmaster William Field, however, it wasn’t erected until after his death in 1860. The front of the stone was inscribed with the word Lancashire, and on the back was the inscription W.F. 1816. 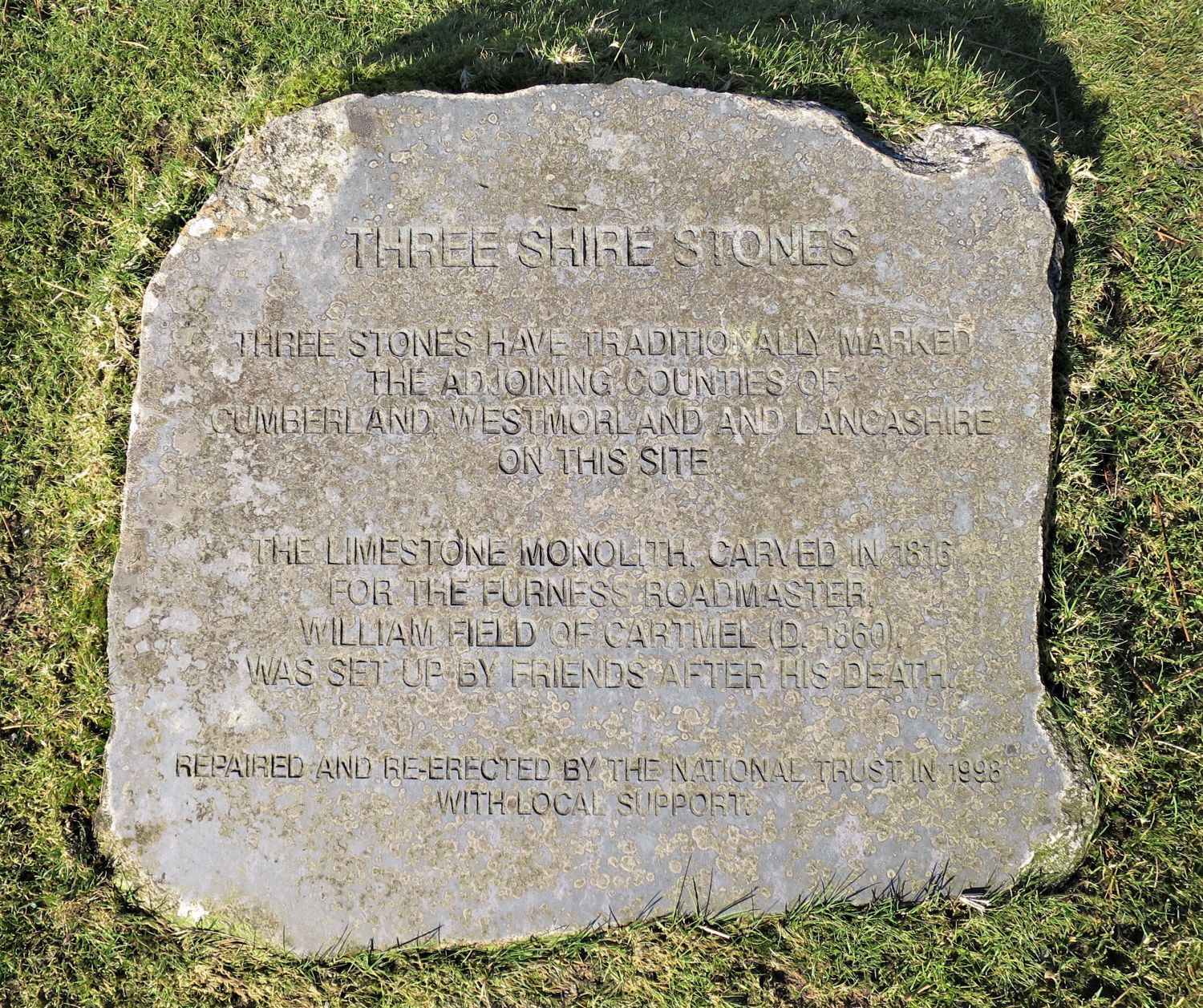 During the summer of 1997, the ‘Three Shire Stone’ was found smashed into four pieces, probably as a result of being struck by a car. Troutbeck Bridge stonemason Gordon Greaves was commissioned to restore it, and the unveiling ceremony of the monument took place on 27th April 1998. The National Trust moved the car park away from the restored stone, and placed three carved stones (Three Shire Stones) in the ground to mark the historic county boundaries radiating from it.
Unfortunately, the monolith was found fallen and damaged during the summer of 2017, and it is expected to take time for the National Trust to repair it; the repair is not straightforward, and is complicated by the fact that it is Grade II listed. 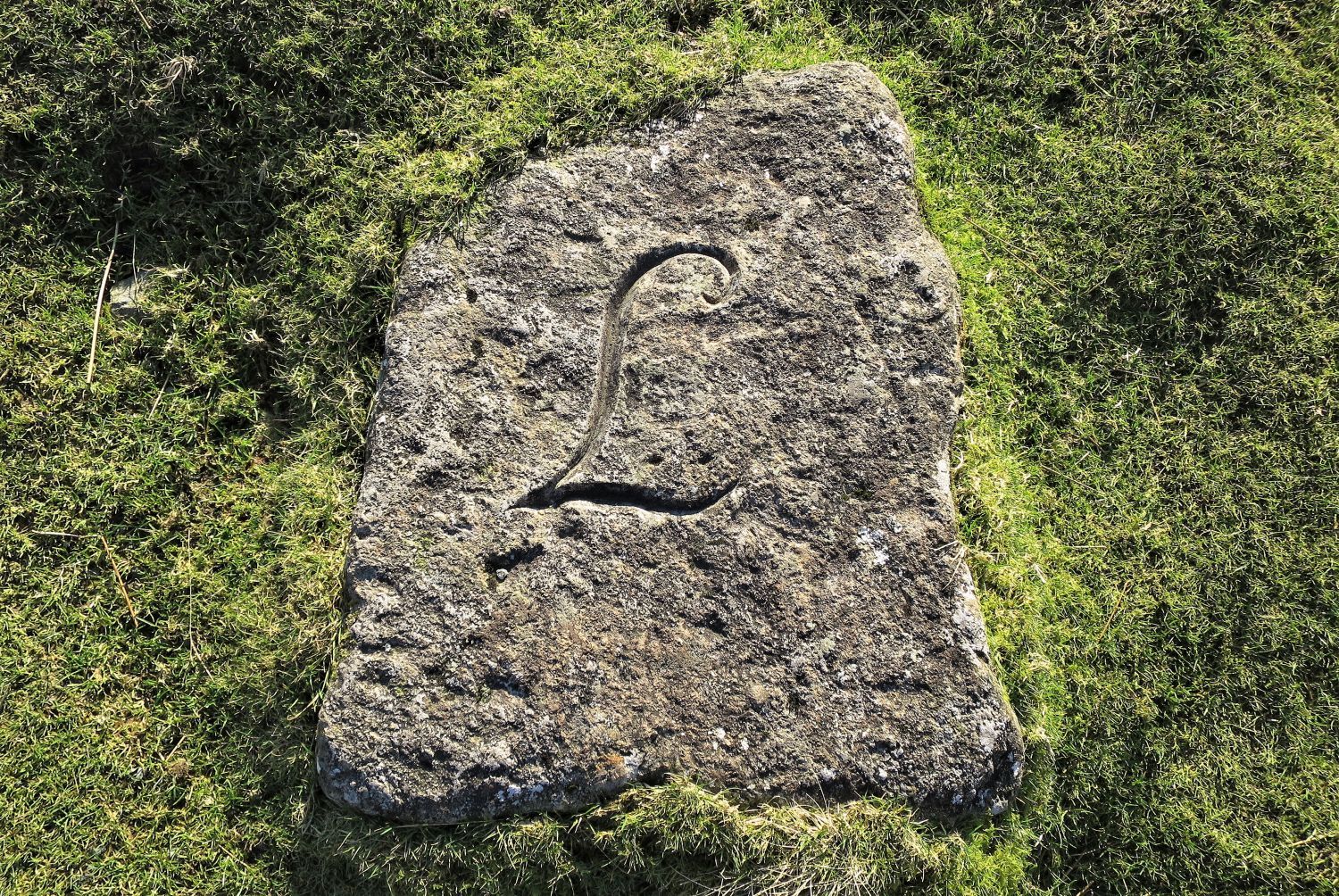 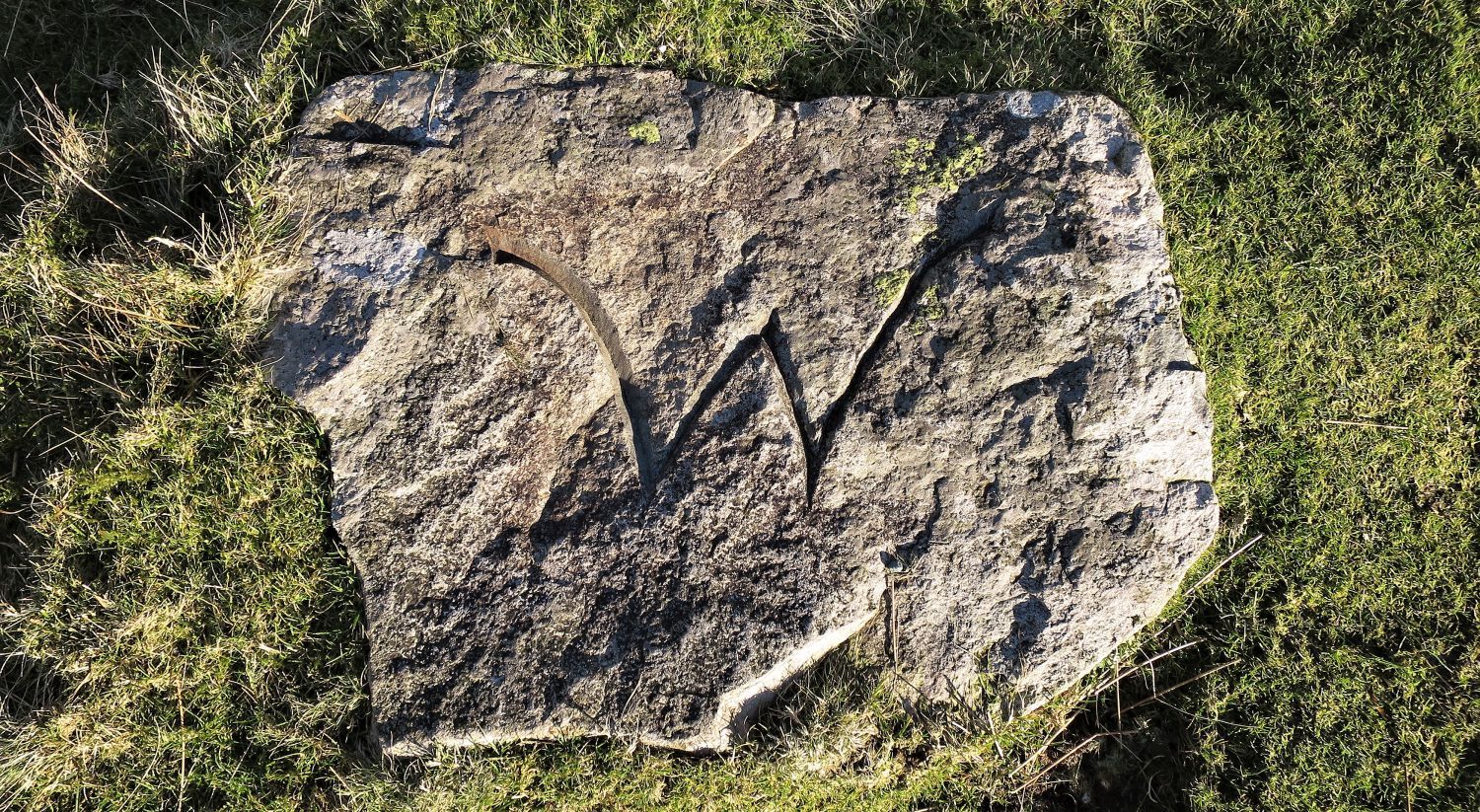 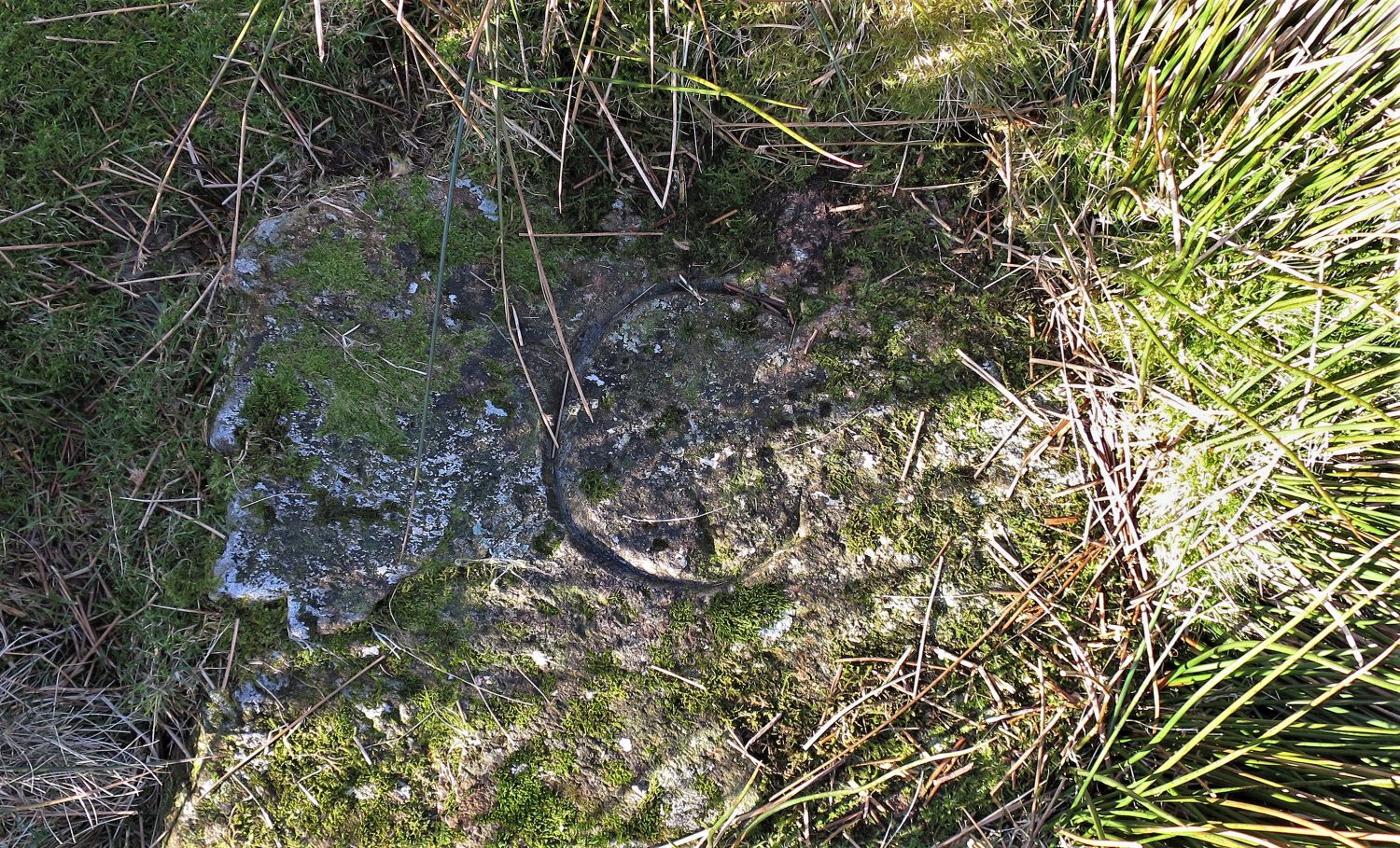