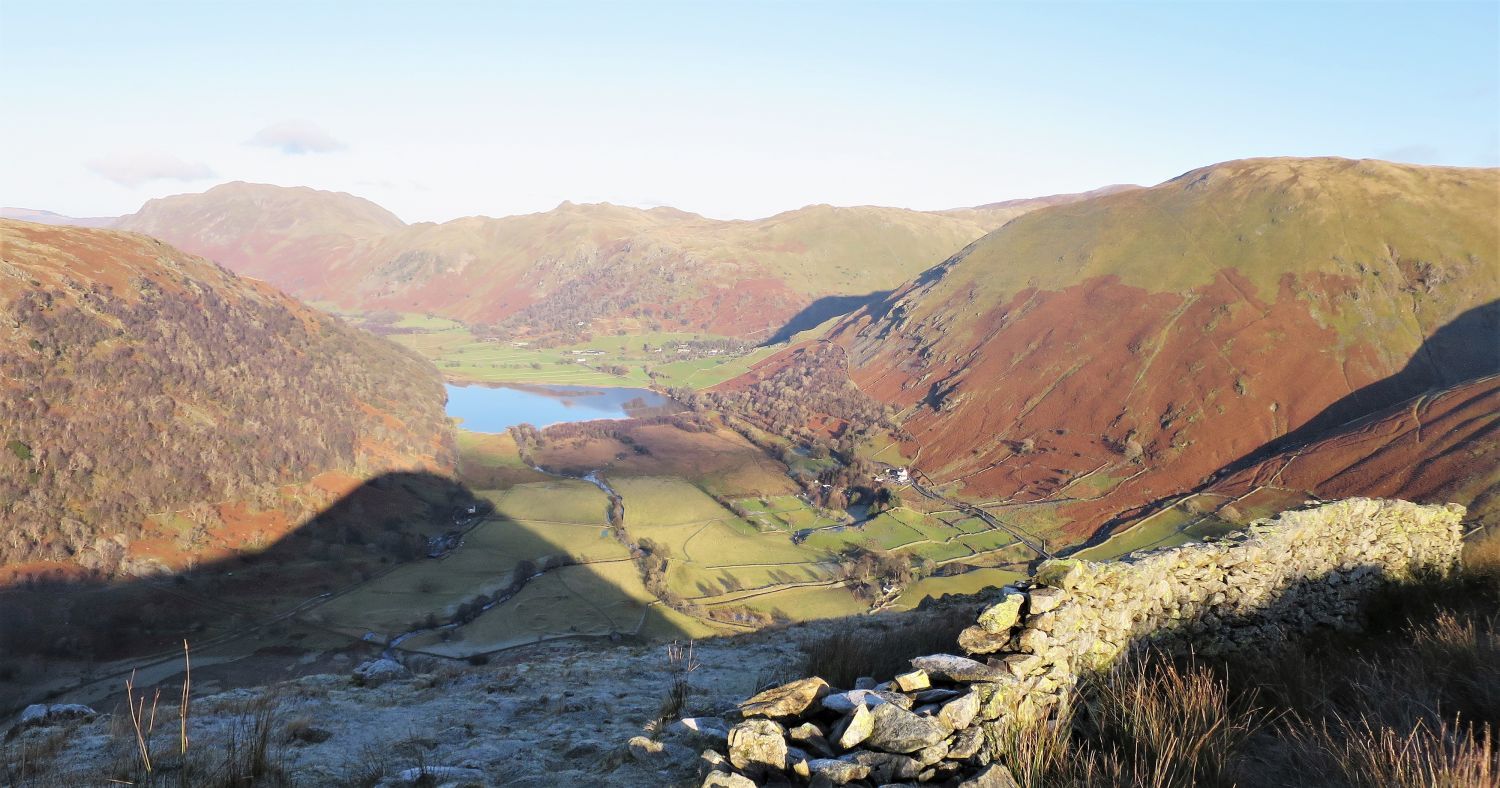 The walk around Dovedale is wonderful in autumn; the flanks of the surrounding fells being cloaked in bronze, while the pastures of the valleys are tinted light green. November is a quieter month, there’s a sense of stillness in the air, and the land is preparing itself for winter. This is the time of year that the fellwalker embraces. 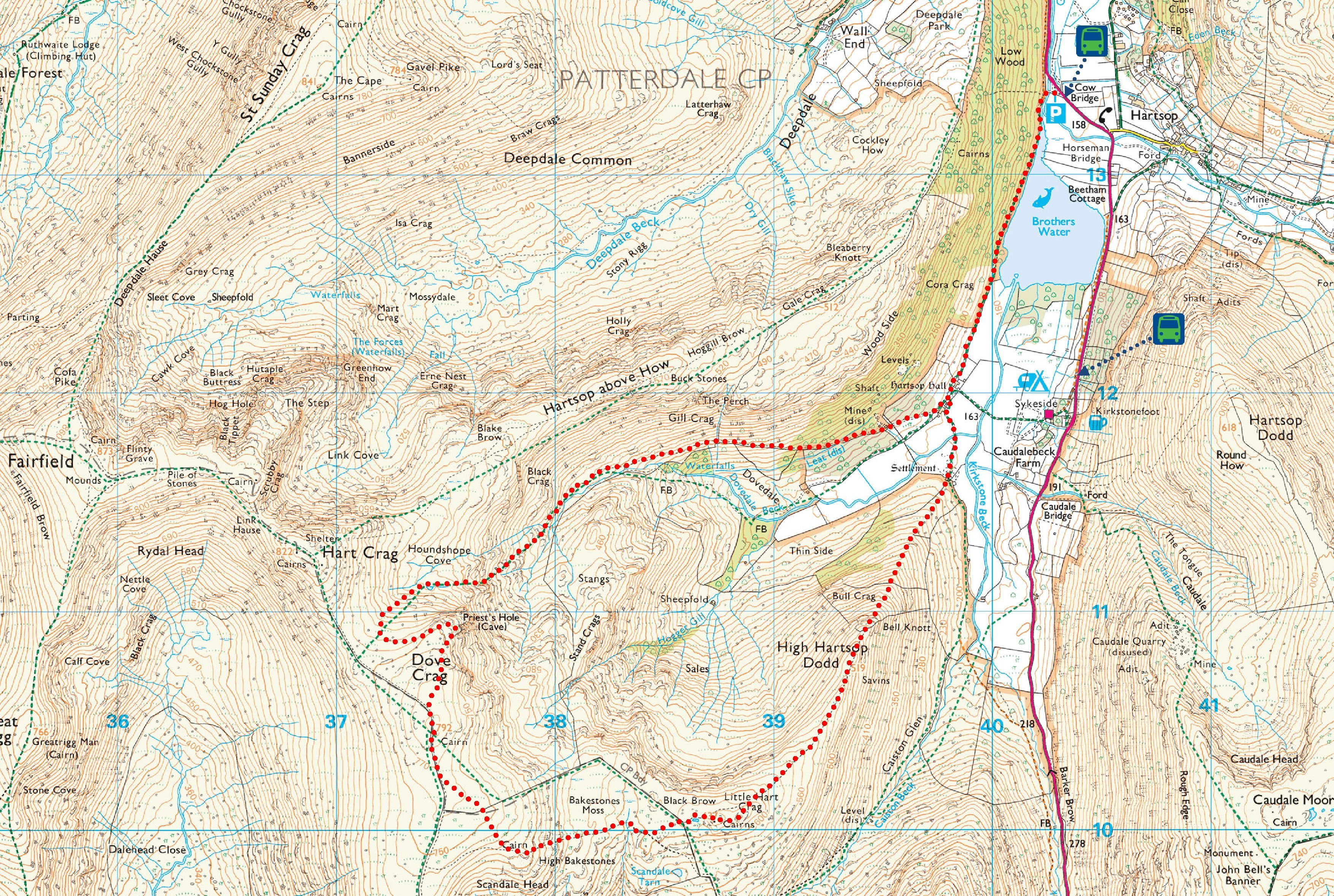 Our walk begins at Cow Bridge near Brothers Water, in the heart of the valley of Patterdale and near the small hamlet of Hartsop. Free car parking is provided at Cow Bridge (NY403134), with an honesty box for donations to the Lake District National Park. The car park can get very busy, particularly at weekends. A limited bus service, the 508, runs between Penrith and Windermere, but please note at certain times it only goes to the village of Patterdale from Penrith.

A view towards Kirkstone Pass from Brothers Water

Kirkstone Pass and surrounding fells cast their shadows on a still surface of Brothers Water; an early start was required to make the most of the limited November daylight, and of course to secure a parking space.

Note the old water leat on the right. This distribution of water formed part of the workings of a lead mine above and beyond Hartsop Hall.

Just beyond Hartsop Hall, the path continues into Dovedale and to Dove Falls, however, look out for a path on the right which leads to the old Hartsop Hall Lead Mine. This route, which I personally think is a far more interesting way of reaching Hunsett Cove above the head of Dovedale, takes a higher traverse on the southern flank of Hartsop above How, providing splendid views down into Dovedale and back towards the valley of Patterdale. 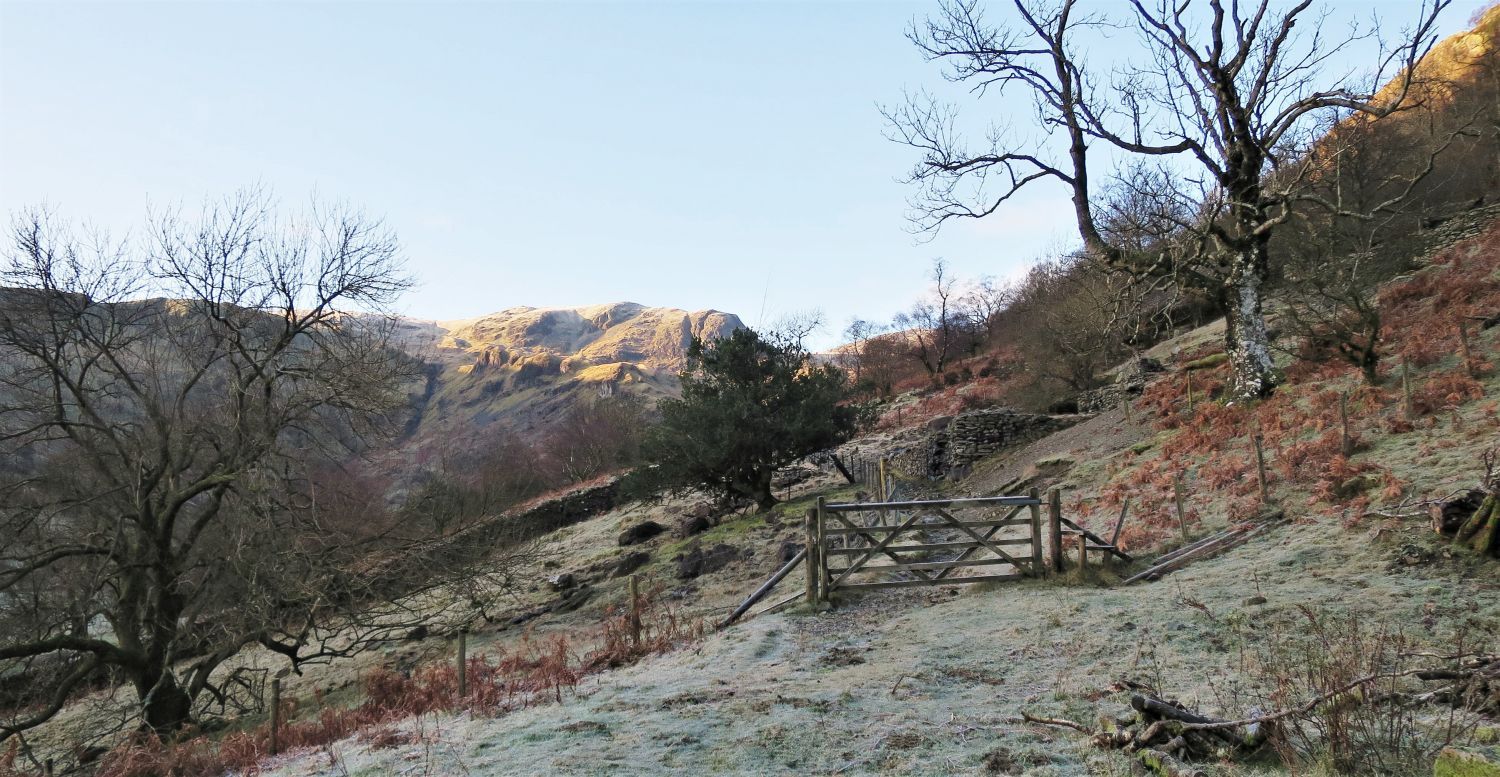 Dove Crag from the approach to Hartsop Hall Lead Mine 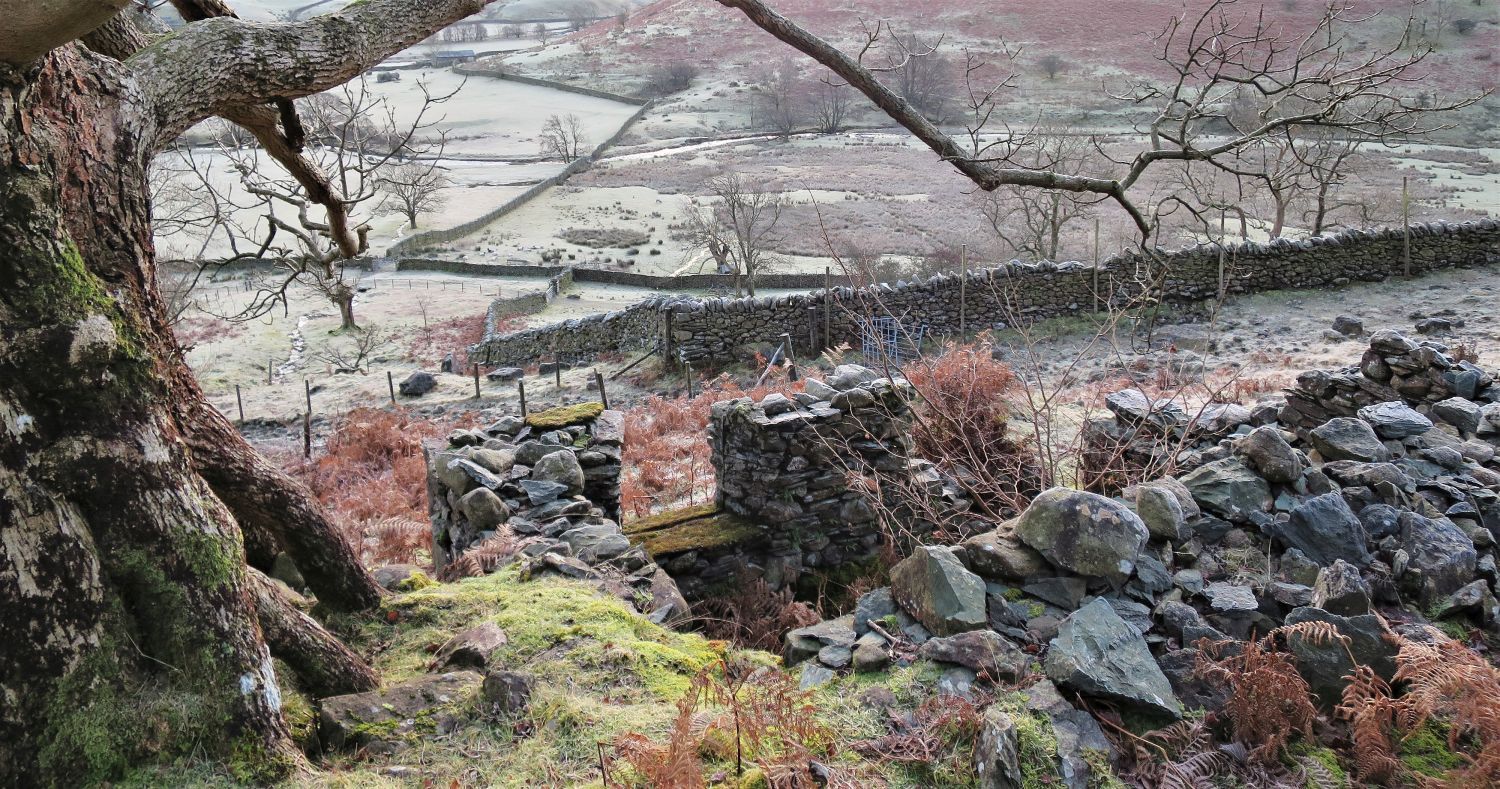 The earliest known leases to be taken on to work the Hartsop Hall Lead Mine was the period between 1684 and 1696, however, it is thought the mine was worked much earlier, maybe in the late 16th century. The Hartsop Hall vein runs north-east to south-west, and is generally about three feet wide and contained lead, silver (35ozs per ton of lead), zinc and copper ore. About half a mile south-west of the mine, near Hoggart Gill, are the remains of an old smelting mill. A water leat which was over a mile in length, was constructed to divert water from Dovedale beck to turn a waterwheel driving the crushing and washing machinery. A Smithy, Joiner’s Shop and office were built below the mill, but when the mine closed in 1860 the buildings were demolished and the stones used to build a new barn at Hartsop Hall. The mine remained closed until 1931 and after a number of re-openings over the next ten years, and due to wartime conditions, the mine closed for the last time in 1942, and the estate was handed over to the National Trust. 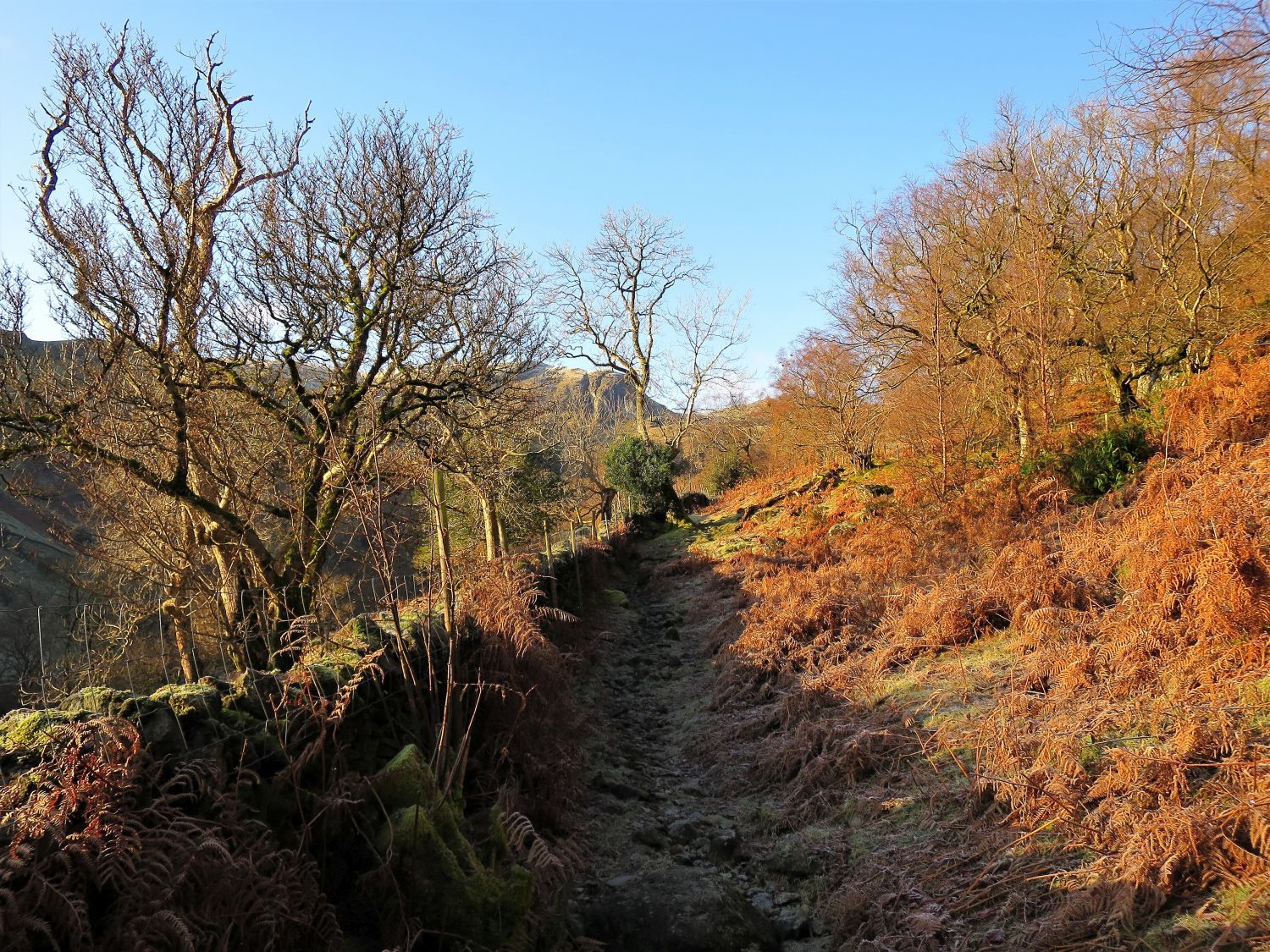 The path above Dovedale

The path continues on from the mine along a wall and through woodland. Many old charcoal burning platforms have been discovered on this southern flank of Hartsop above How. 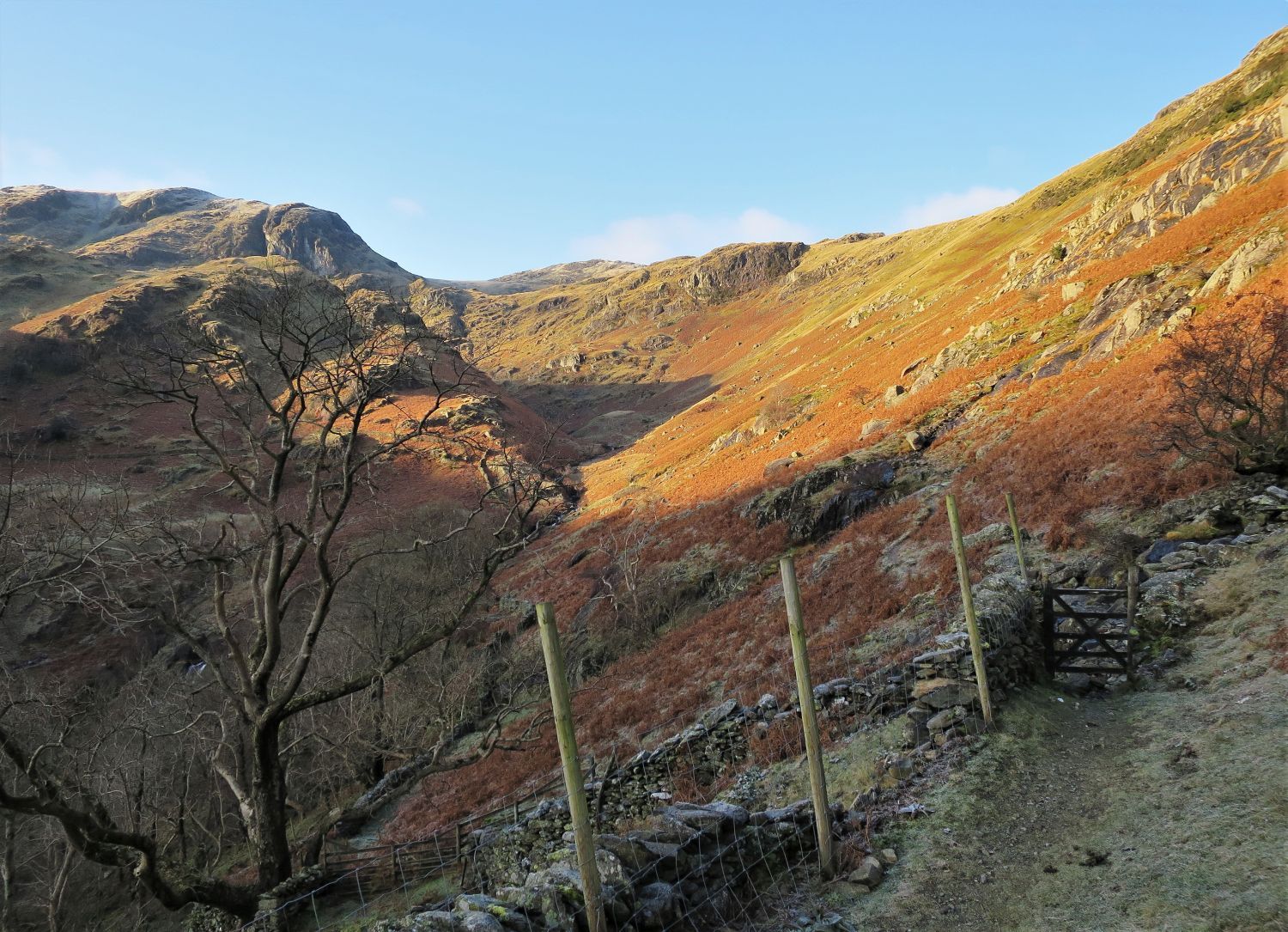 The head of Dovedale

On exiting the wood the upper levels of Houndshope Cove and Hunsett Cove appear above the head of Dovedale, while on the left Dove Crag towers over the beginning of the ridge of Stangs. 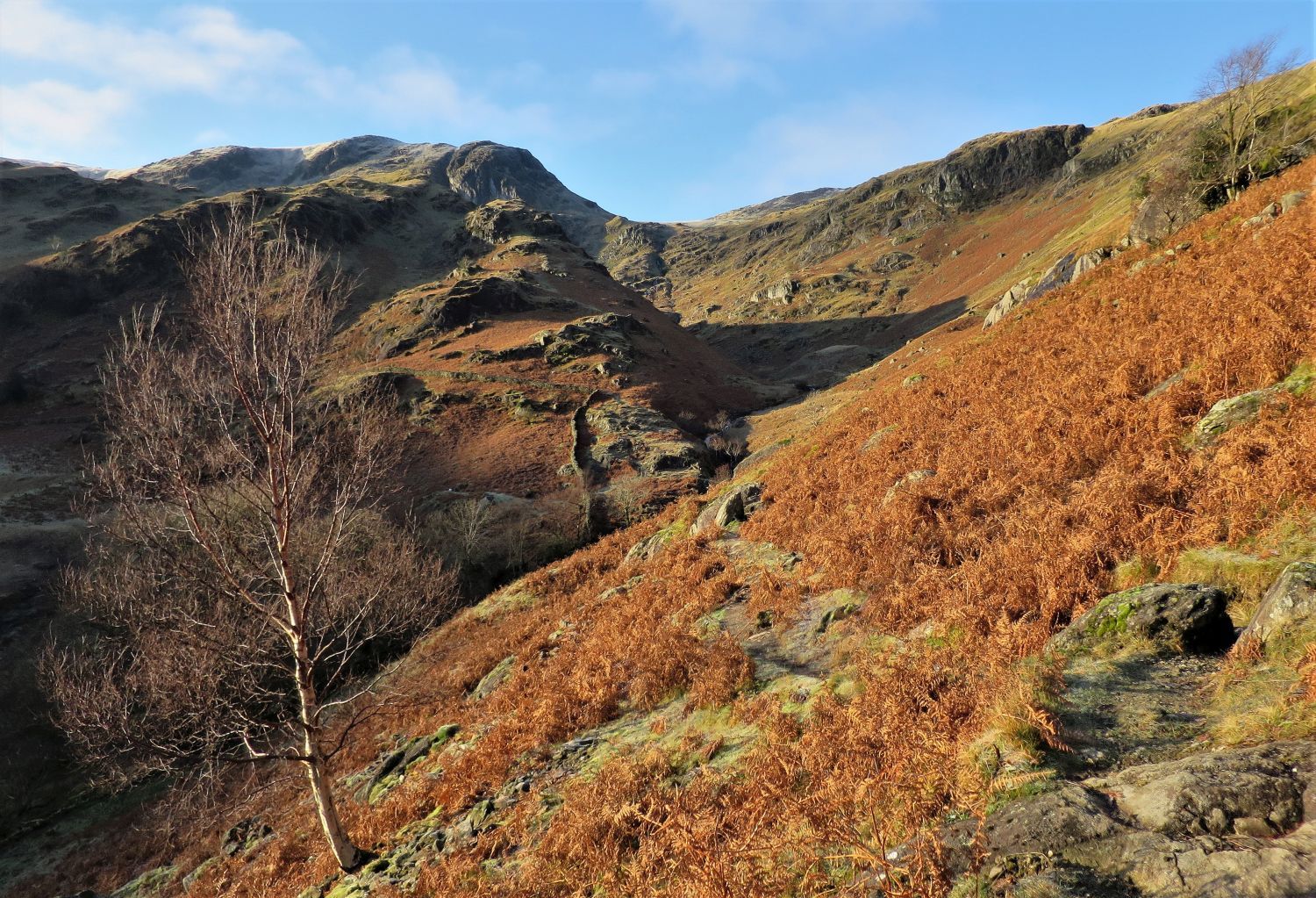 Dove Crag over the Stangs and Dovedale Beck

The towering ridge of Stangs dominates the scenery on the approach to Hunsett Cove, while the col between Dove Crag and Hartsop above How appears in the distance; beyond that is Houndshope Cove and Hart Crag.

“Dove Crag is a mountain of sharp contrasts. To the east, its finest aspect, it presents a scarred and rugged face, a face full of character and interest. Here, in small compass, is a tangle of rough country, a maze of steep cliffs, gloomy hollows and curious foothills gnarled like the knuckles of a clenched fist, with the charming valley of Dovedale below and the main crag of the fell frowning down over all.” Dove Crag 2
AW 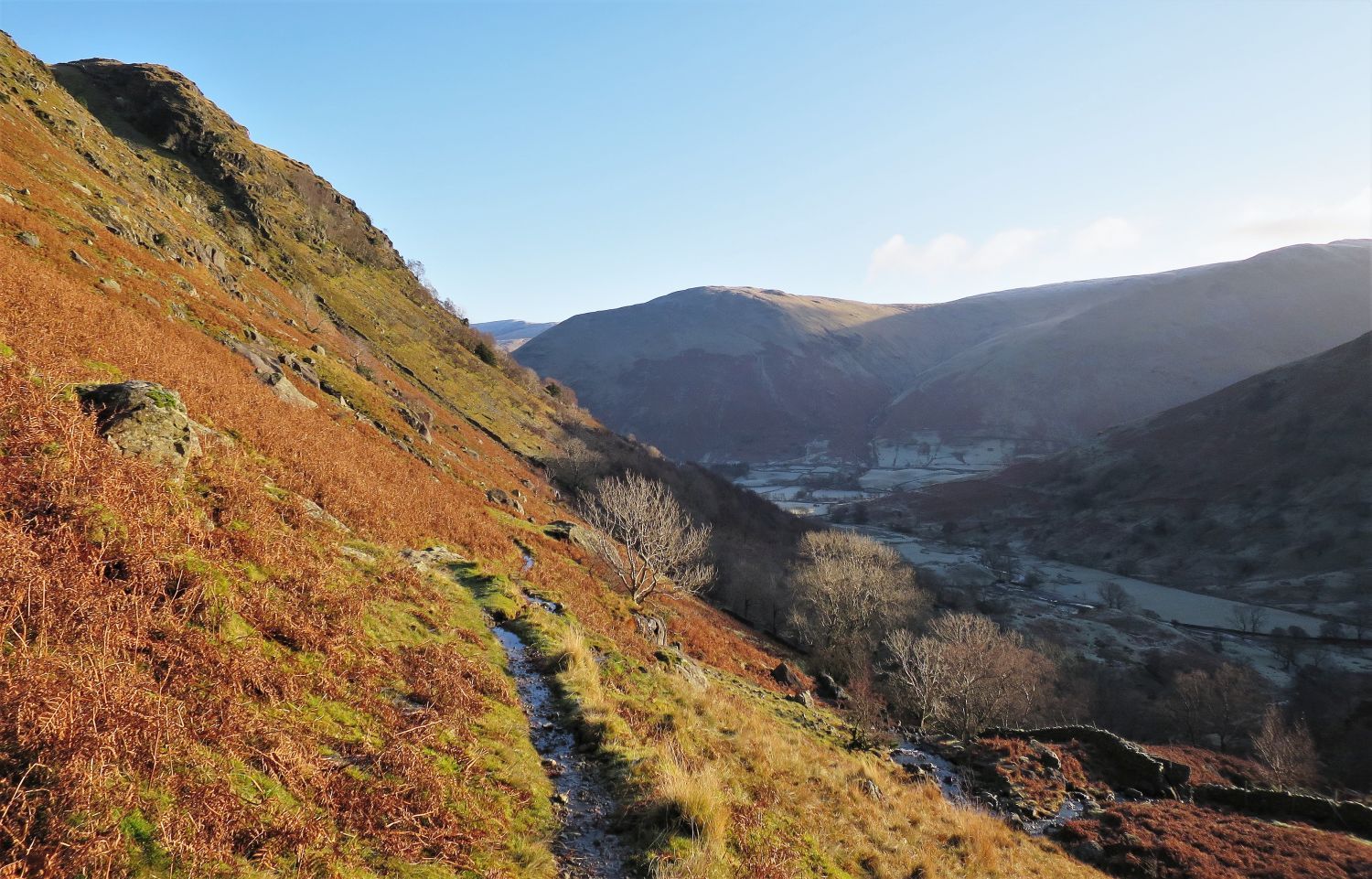 Looking back down Dovedale towards Hartsop Dodd over Patterdale 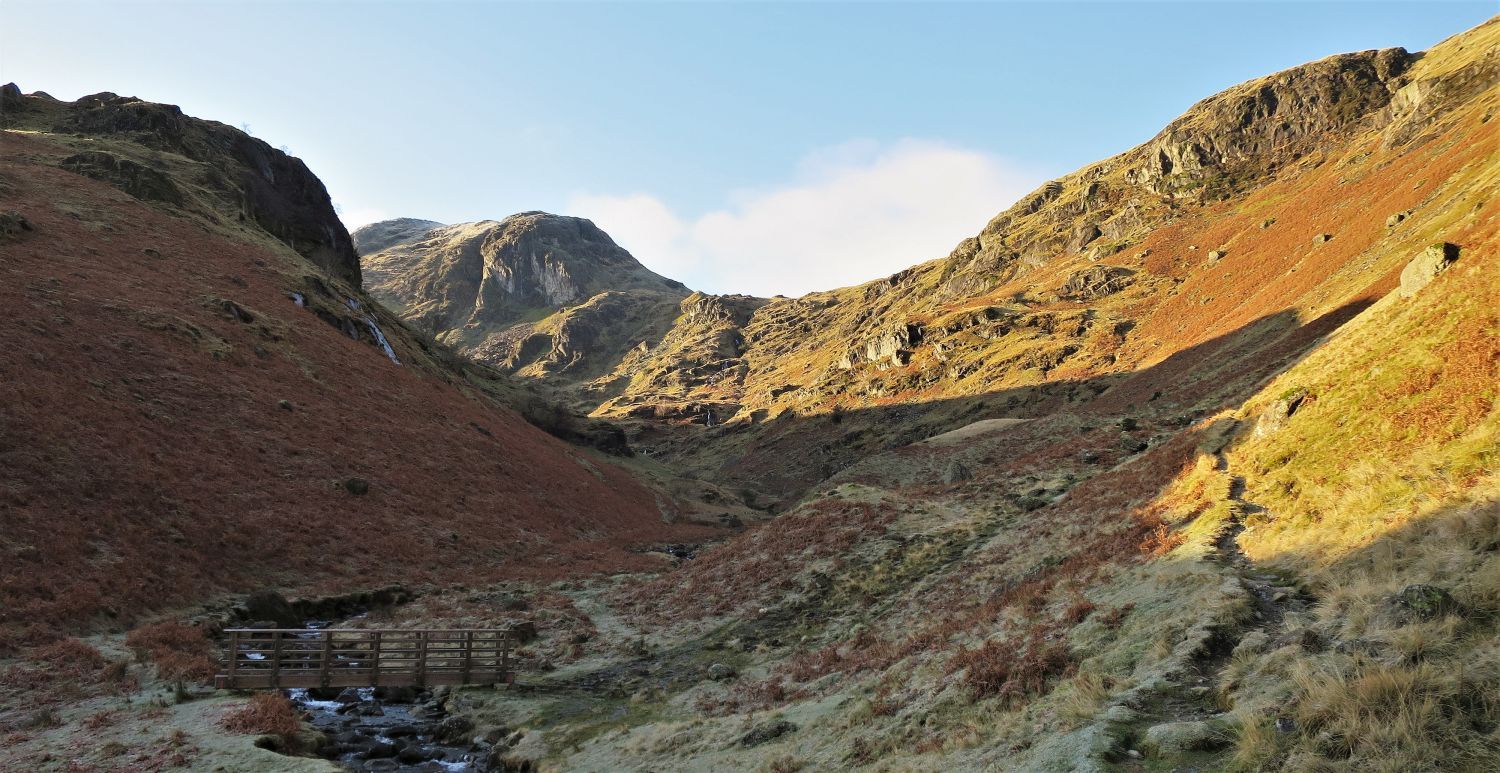 Dove Crag from the footbridge over Dovedale Beck

On our left the Dove Falls route makes an appearance from Dovedale, before joining our high-level path on the approach to Hunsett Cove.

“The lofty height that towers so magnificently over Dovedale is indebted for its name to a very impressive vertical wall of rock on the north-east flank.” Dove Crag 1
AW 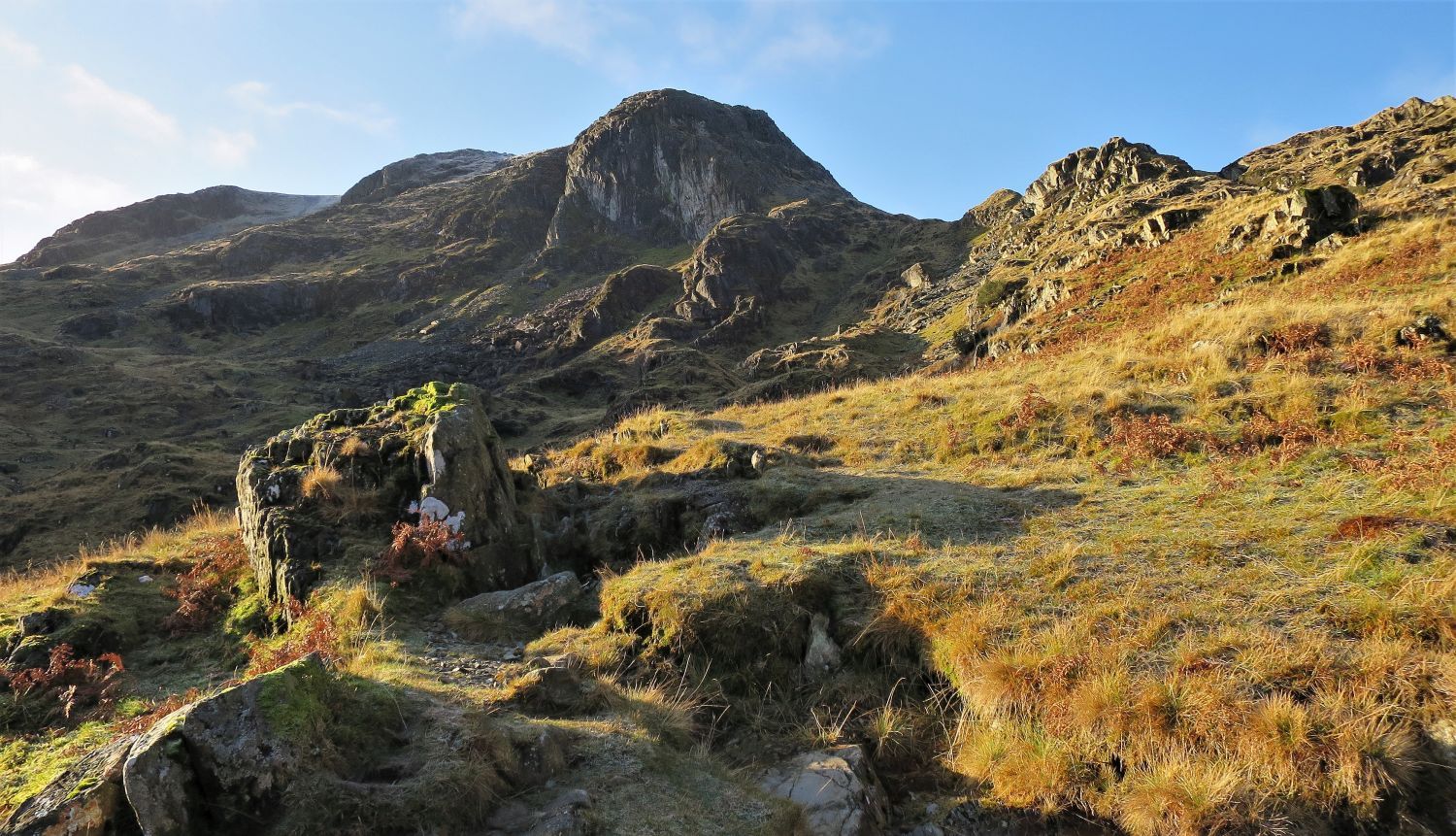 “It is believed that Hunsett Cove was once the crater of a volcano. Huge boulders litter the cove, many having gardens of lush vegetation on their massive tops….” 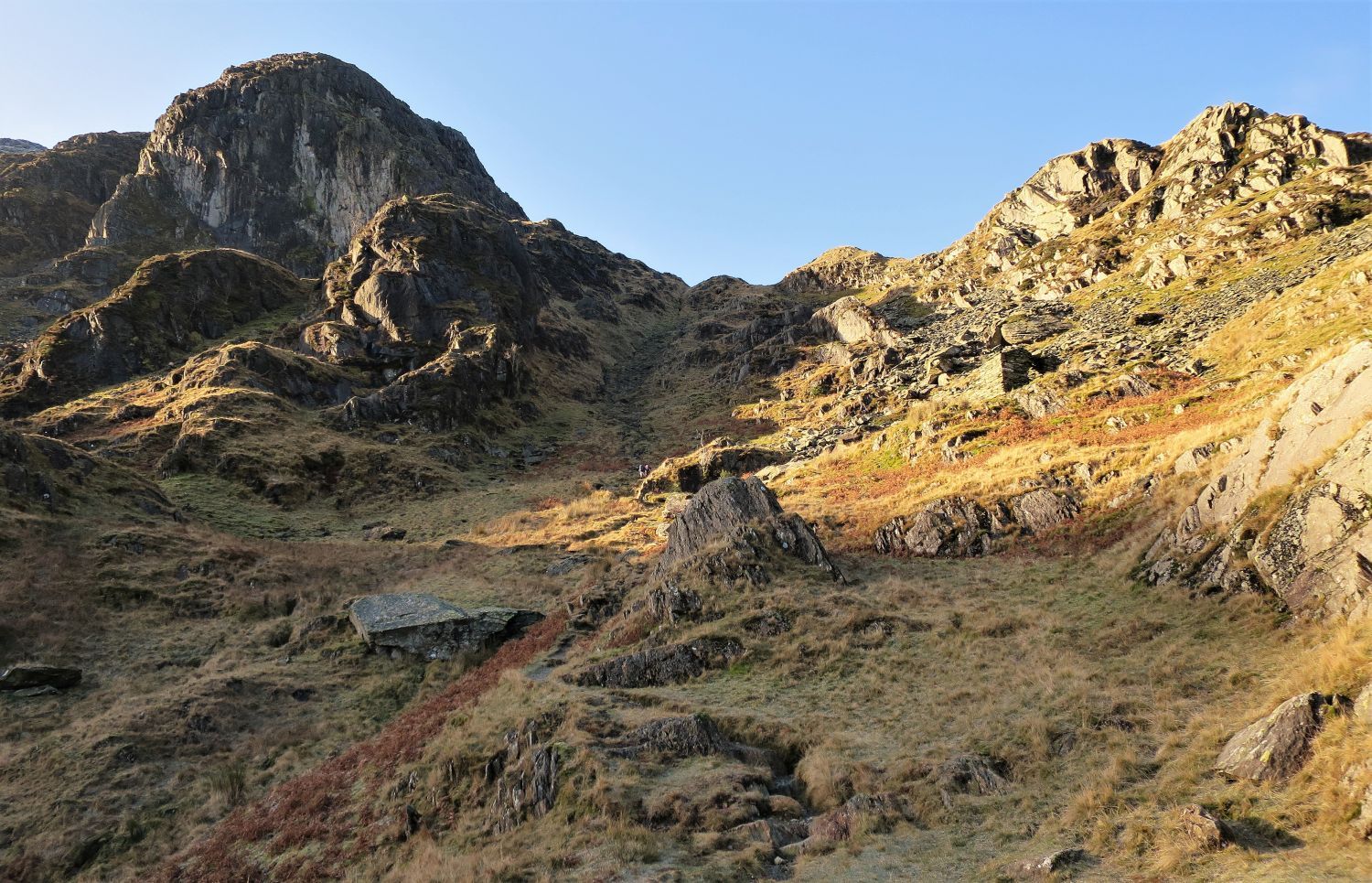 Dove Crag and the ‘gully staircase’ (centre) from Hunsett Cove

“….Some of these blocks have been artificially detached; there are evidences of former quarrying operations nearby. The cove is grand territory for the explorer; and for those hardy souls who like to spend occasional nights amongst the fells there is abundant shelter available in the many holes and caves formed by the boulders.” Dove Crag 4
AW

Ahead is the grand ‘gully staircase’ which leads on to Houndshope Cove; two walkers are at its base and just about to start the series of rock steps. On the right, a ruined quarry hut is well worth a visit. 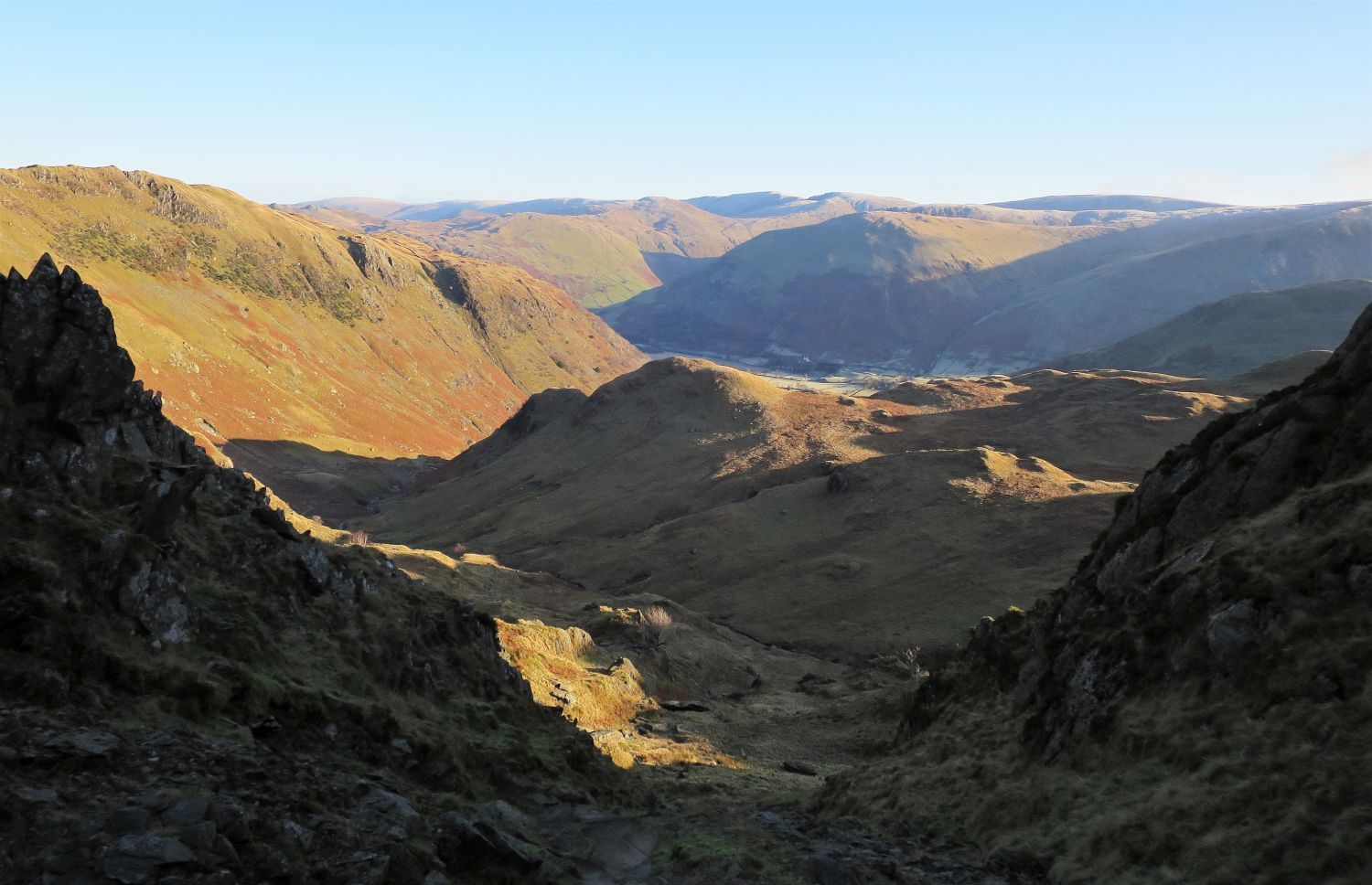 Looking back to Stangs over Hunsett Cove from the gully staircase 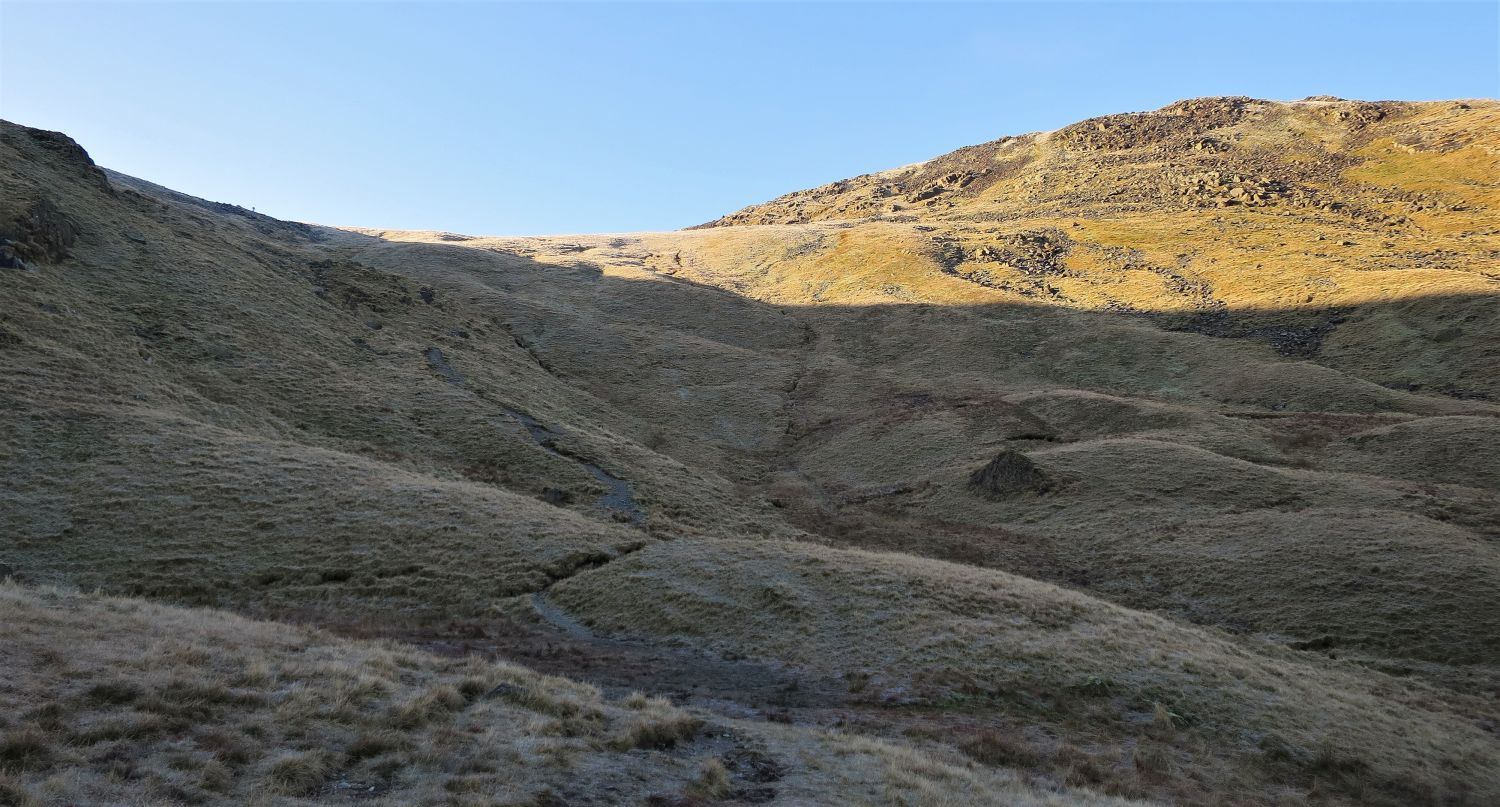 Once the upper hollow of Houndshope Cove is reached, a visit to the Priest’s Hole (cave) can be achieved by following a short traverse along Dove Crag’s rock face. Sadly this popular shelter has become victim to the biggest crime in our National Parks, litter; on our last visit we brought down with us two large sacks of rubbish! 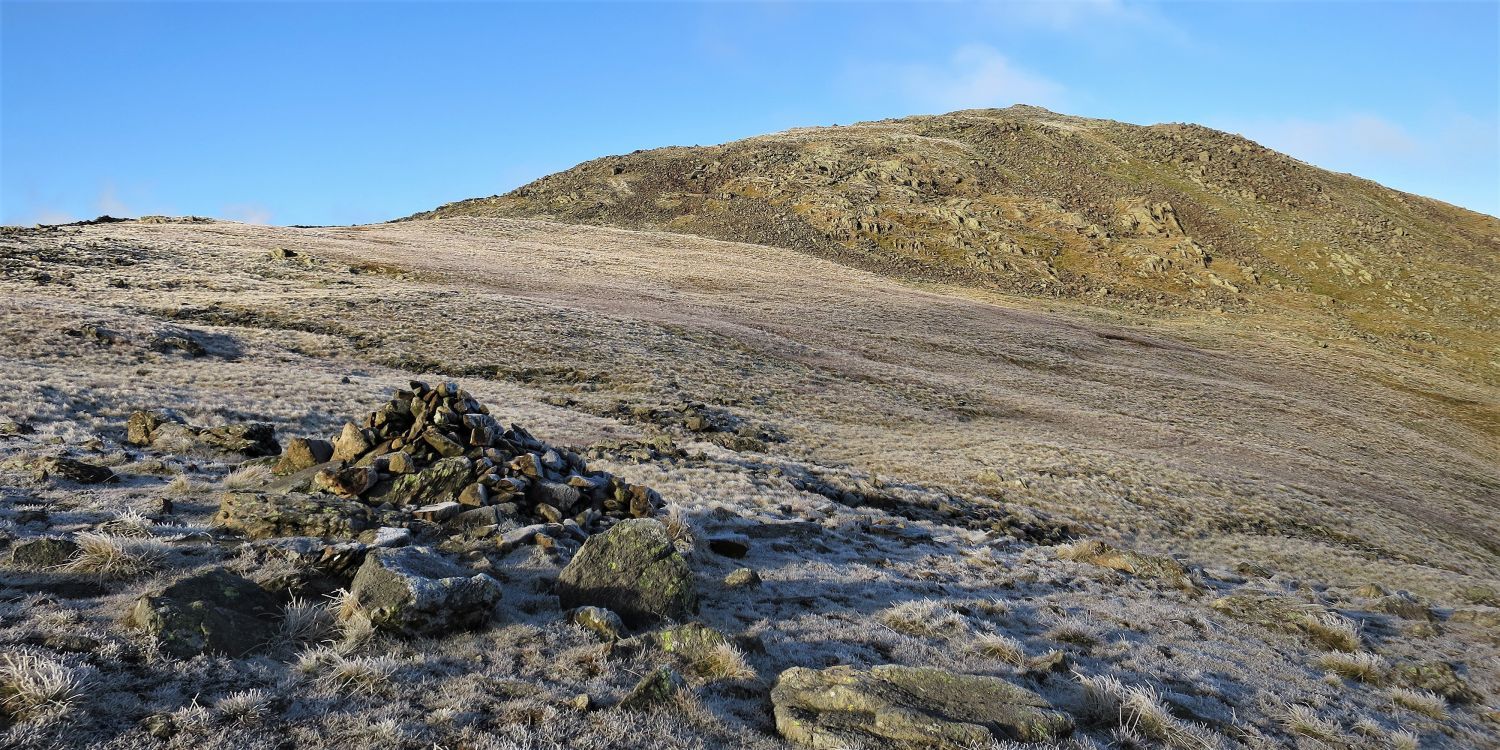 Hart Crag from above Houndshope Cove

The path continues its ascent to the ridge connecting Hart Crag with Dove Crag, however, once this cairn is reached, leave the main path and take a direct pathless route towards the northern escarpment of Dove Crag.

The approach towards the northern escarpment of Dove Crag 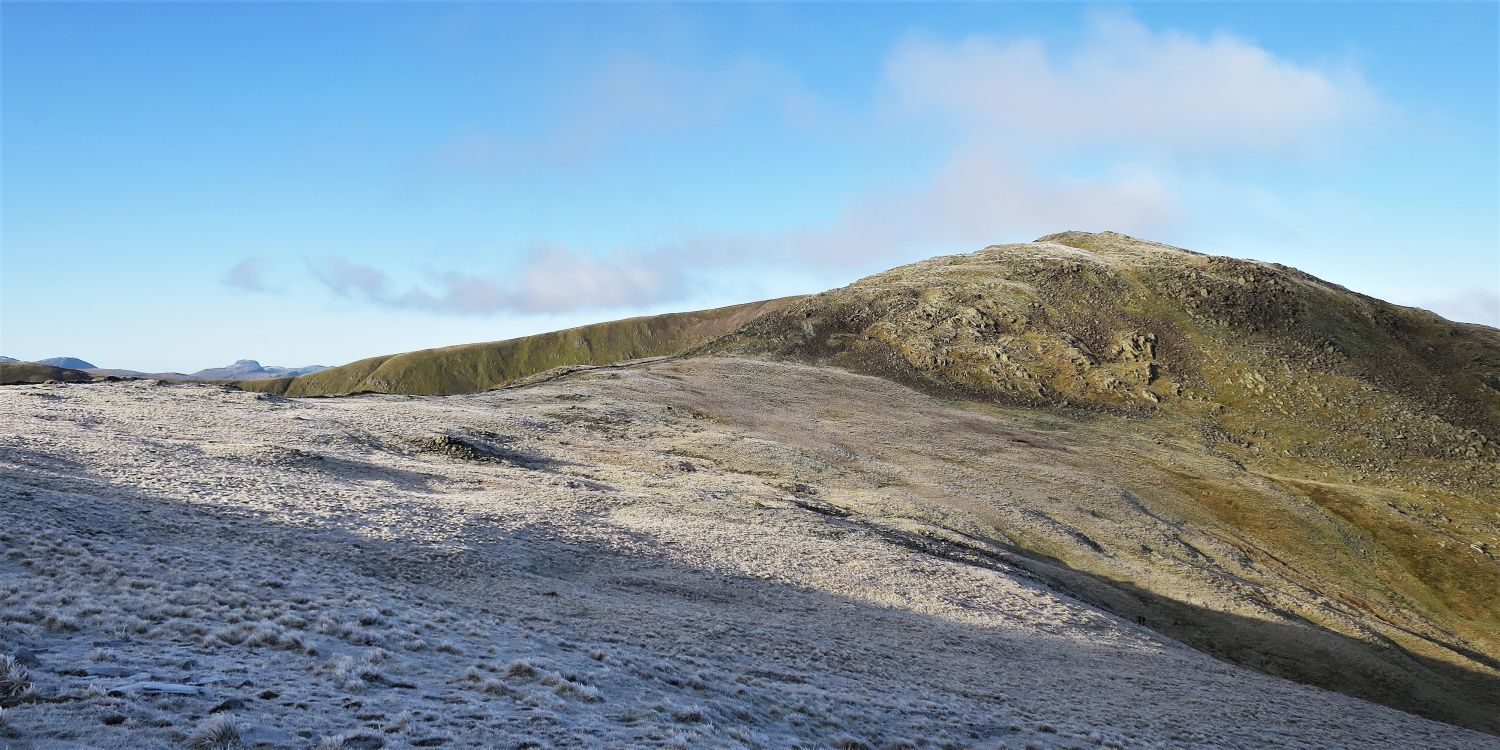 Looking back towards Hart Crag

“The fell is a vertebra of the Fairfield spine and is connected to the next height in the system, Hart Crag, by a lofty depression.” Dove Crag 2
AW

Note on the left a distant Great Gable appearing over the ridge of Great Rigg. 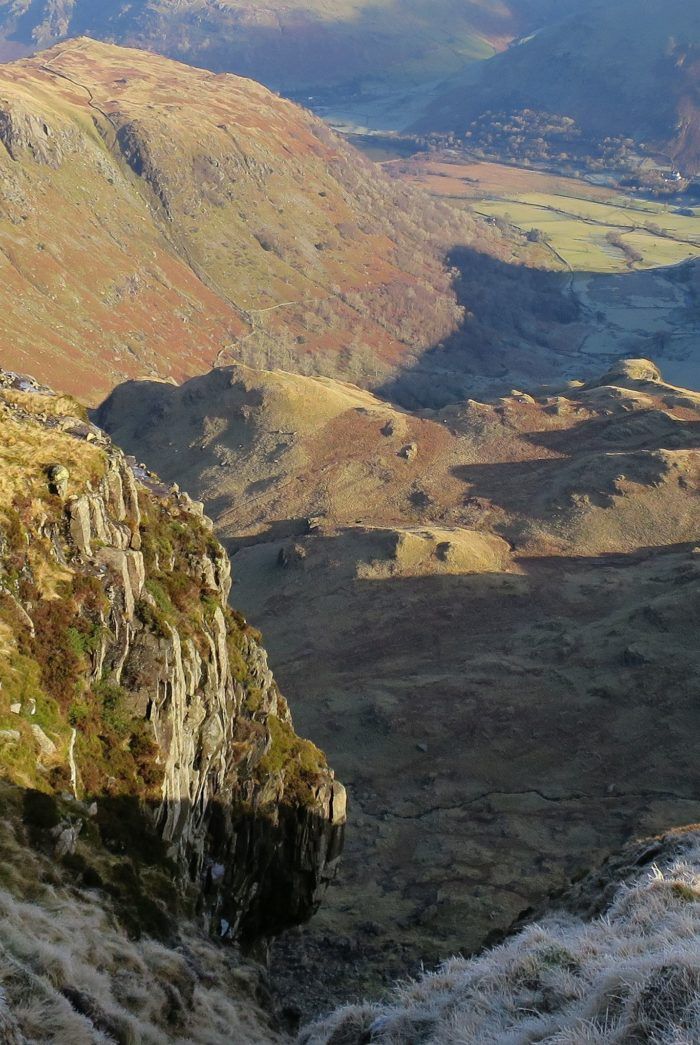 Book One
The Eastern Fells
Dove Crag 10
“Dovedale, from the top of Easy Gully”

The detour to the northern escarpment is well worth it, providing dramatic views down into Dovedale and beyond. This has to be one of my favourite locations where Alfred Wainwright once sat to take his photo from. Thank you AW.

“Easy Gully was so named by Rock-climbers; it is NOT a pedestrian route.” Dove Crag 2
AW 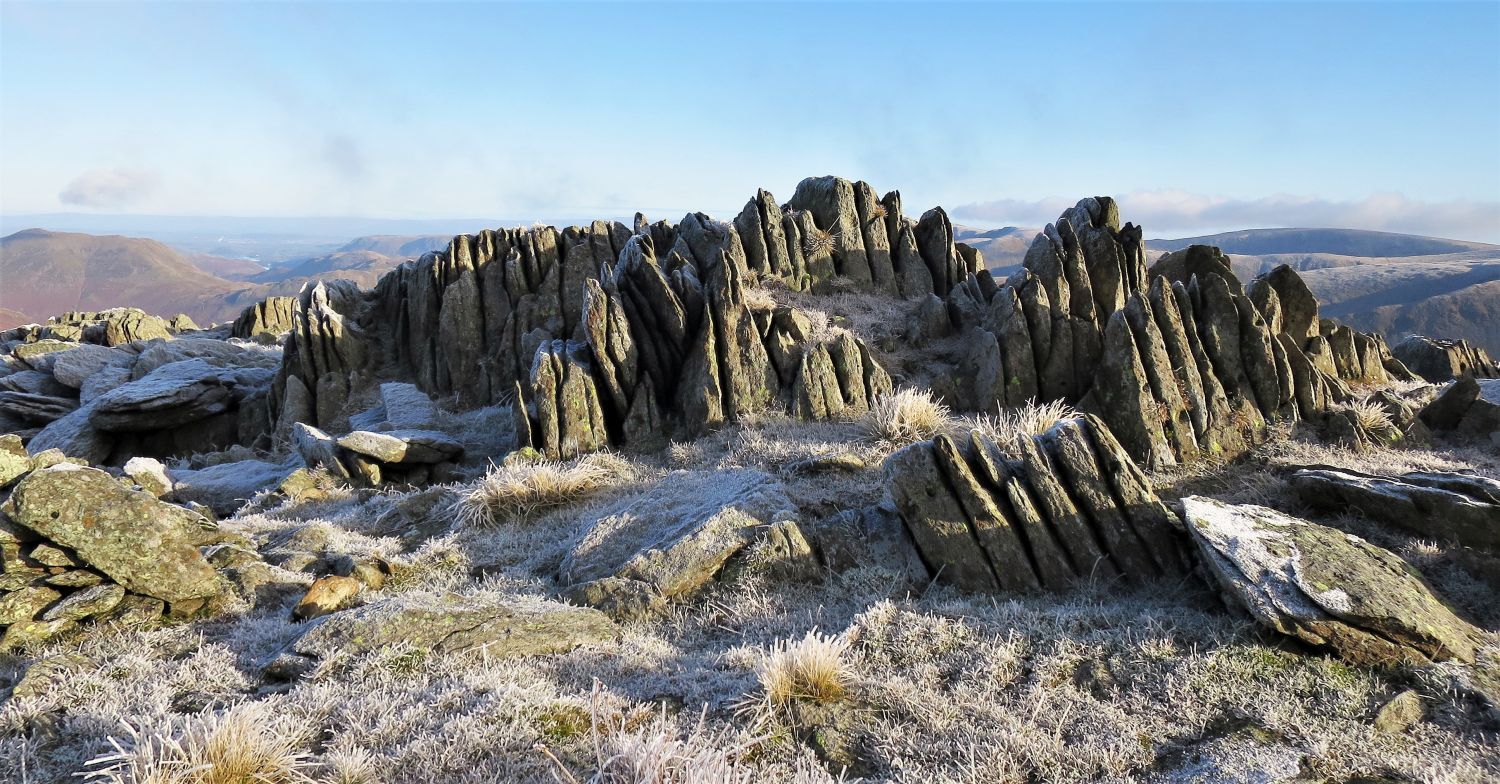 Rock formations on the summit plateau 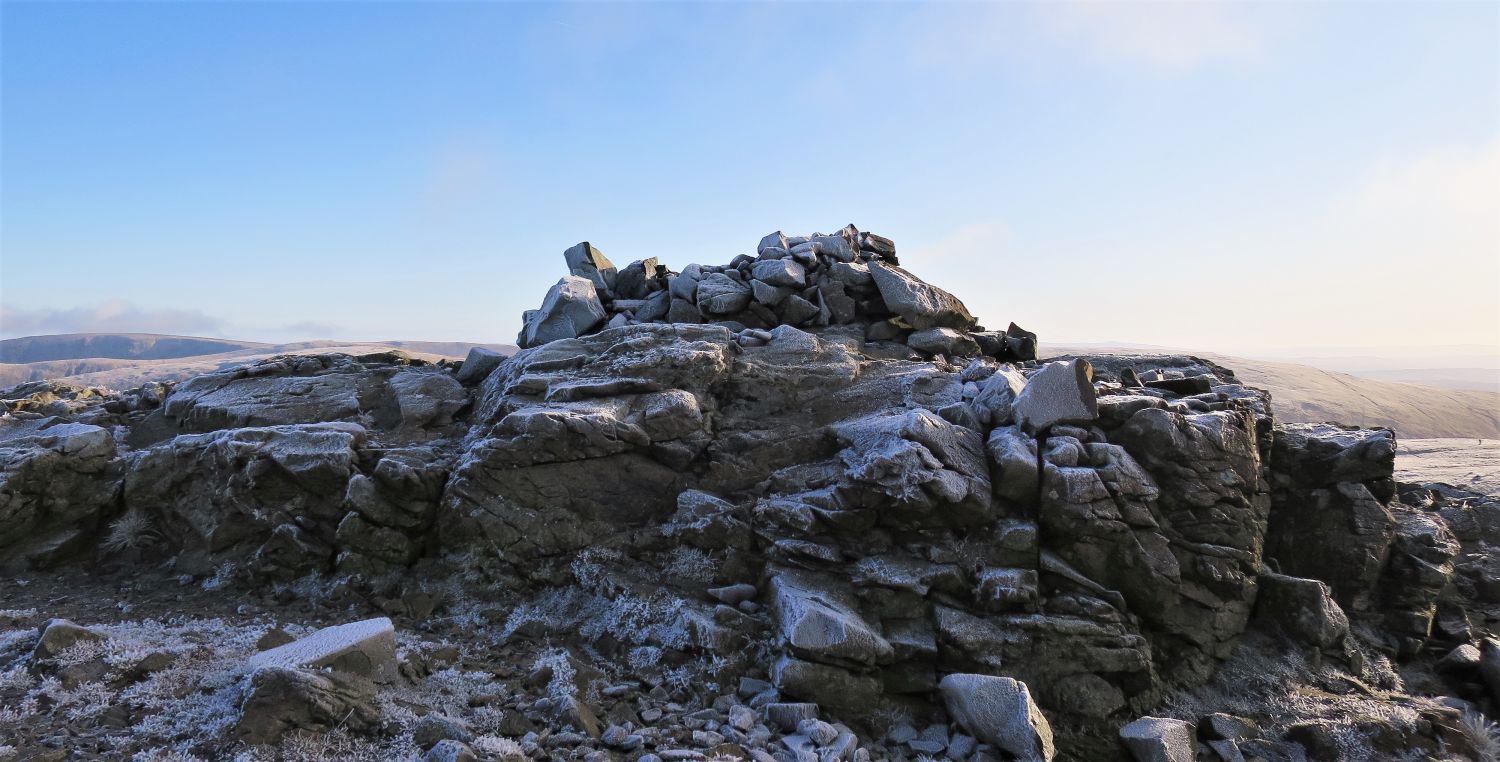 Book One
The Eastern Fells
Dove Crag 6
“The Summit”

“The actual top of the fell is a small rock platform crowned by a cairn, twenty yards east of the crumbling wall crossing the broad summit-plateau. It is of little distinction and there is nothing of interest in the immediate surroundings.” Dove Crag 6
AW

On leaving the summit of Dove Crag, avoid following the main ridge-wall path, and instead head south-east until the large cairn on High Bakestones is seen; a path leading to the cairn soon becomes apparent. From High Bakestones, the next objective is Little Hart Crag, seen here down on the left.

“This beautifully-built 8′ column, commanding a view of Scandale, is one of the finest specimens on these hills. It is more than a cairn. It is a work of art and a lasting memorial to its builder.” Dove Crag 10
AW

The descent to Bakestones Moss can be a little steep and rough in places. From there the ground becomes marshy and the path can be lost, especially in mist.

Note the tiny Scandale Tarn, and the head of Scandale Gill on the left.

Note the large cairn on High Bakestones on the left.

The approach to Little Hart Crag

Book One
The Eastern Fells
Little Hart Crag 5
“The Summit”

“There are two well-defined tops. The higher is that nearer to Dove Crag; it is surmounted by a cairn perched on the extreme edge of a rocky platform….”

The summit from the north-east top

“….The lower summit, to the north-east, is less conspicuous, but is easily identified in mist by markings of quartz in the stones near the insignificant cairn. This cairn is the key to the ridge going down to High Hartsop Dodd. Both summits are buttressed to the south by sheer walls of black rock.” Little Hart Crag 5
AW 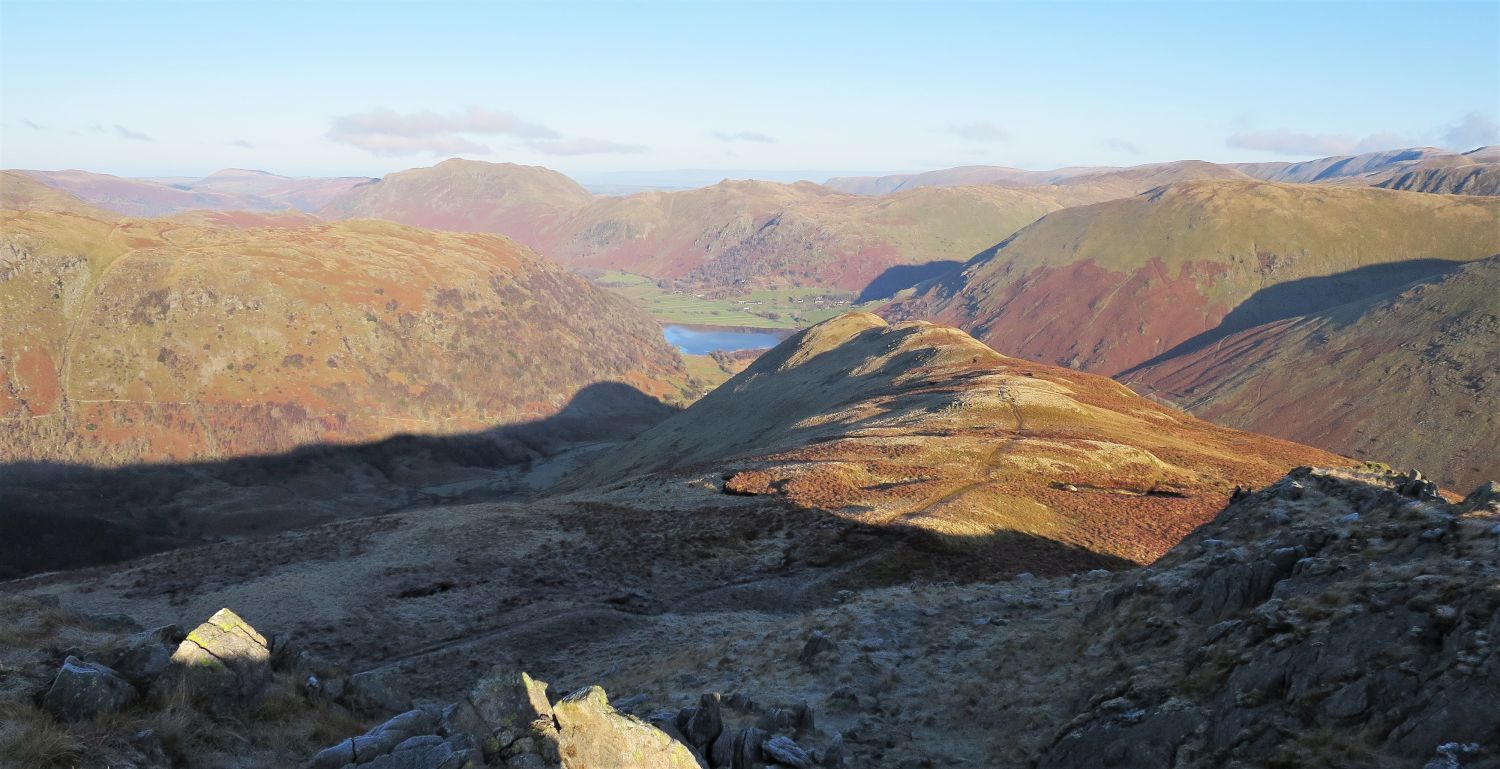 Red deer crossing over the ridge from Dovedale….

….and heading into Caiston Glen

“This unassuming fell had its brief period of glory in 1948, when it won headlines in the newspapers by the efforts of rescuers to save two terriers trapped in a hole on the steep Caiston flank.” High Hartsop Dodd 2
AW 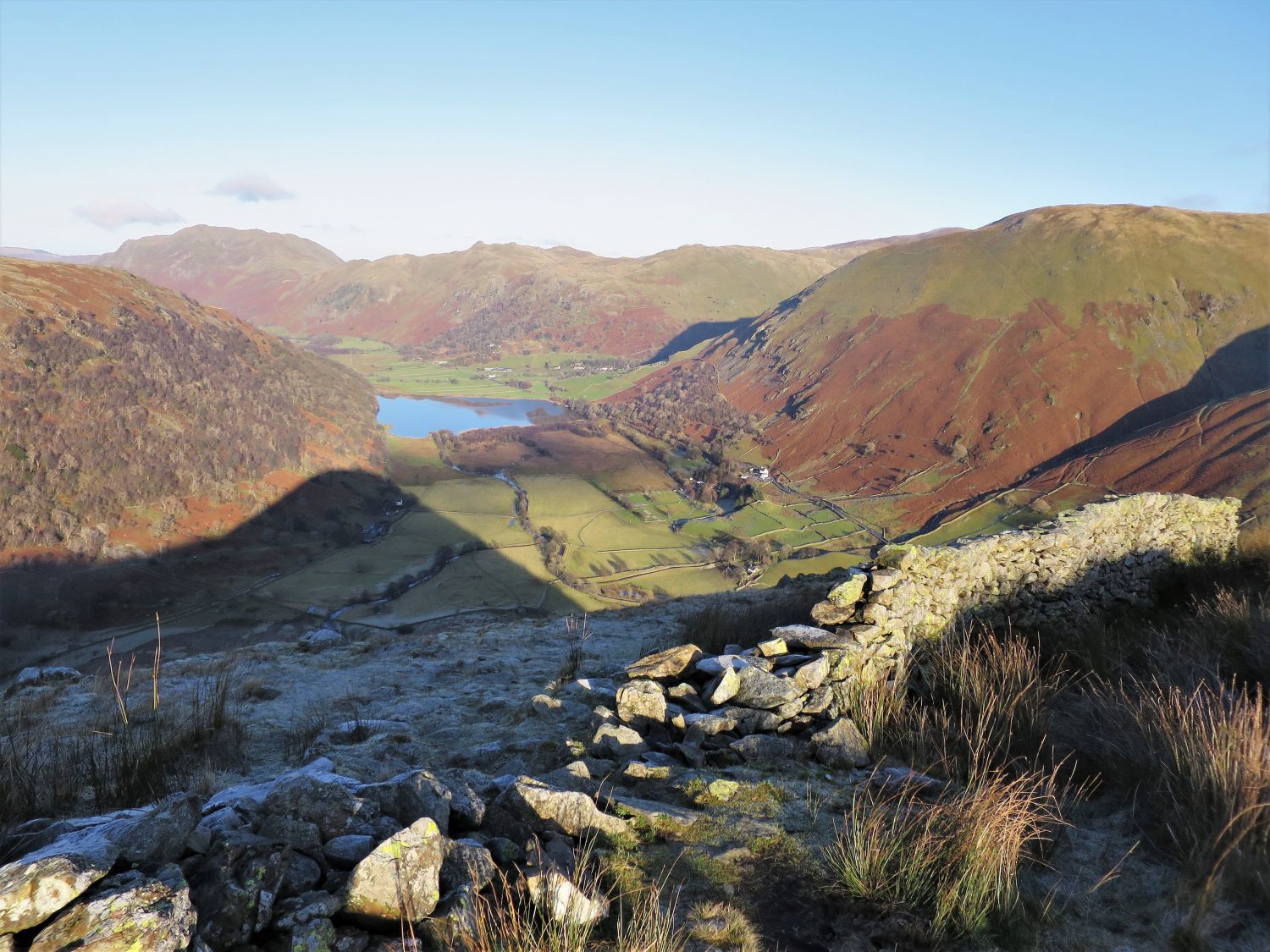 Brothers Water from the wall over the ridge

“In descending, in mist, remember that the wall does not cross the ridge at right-angles, but at a tangent. Do NOT follow the wall down; on both flanks it leads to crags.” High Hartsop Dodd 2
AW 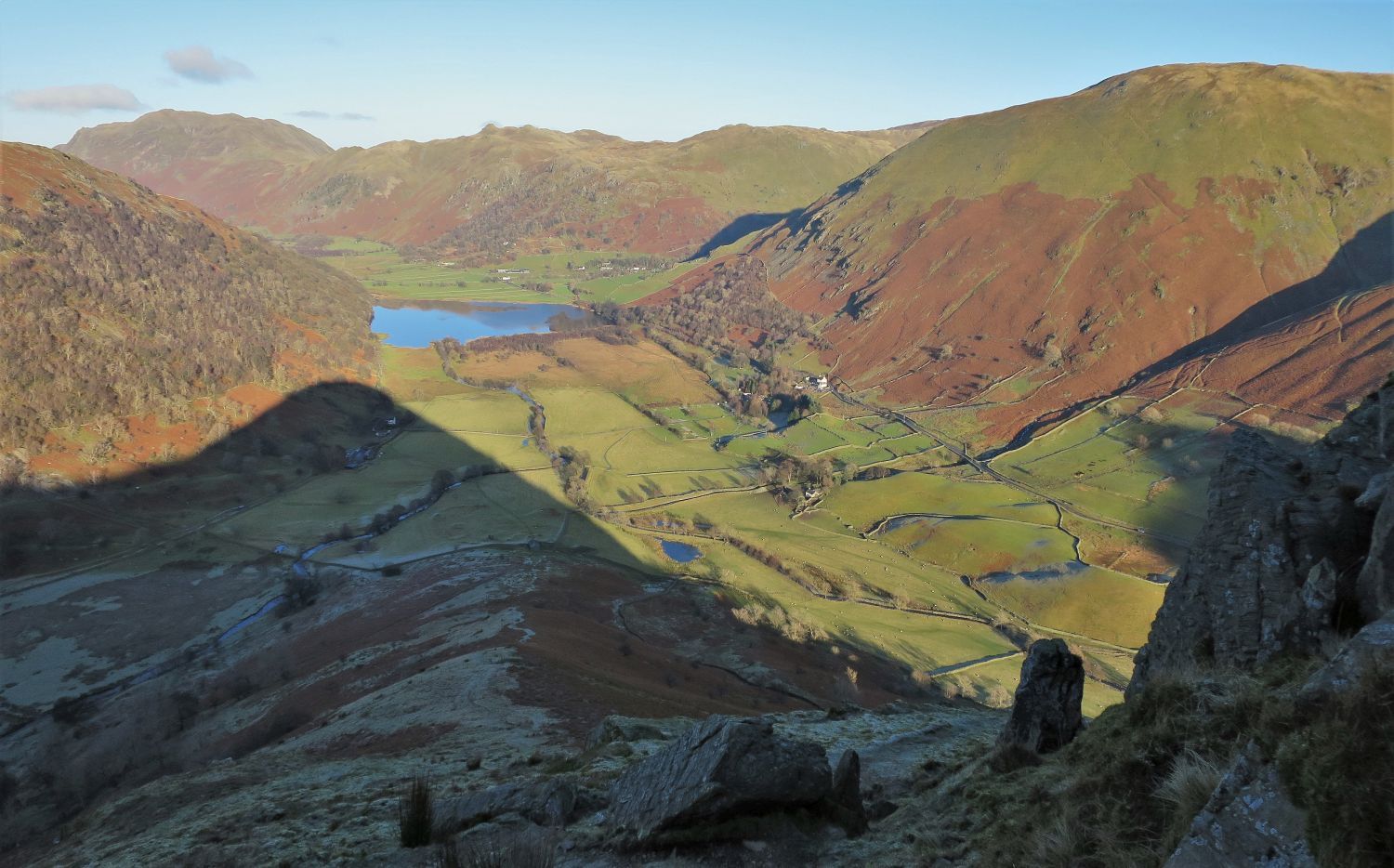 Place Fell, Angletarn Pikes and Brock Crags, with Hartsop Dodd on the right

The remaining 100 feet of the ridge to the pastures of Hartsop Hall are steep. 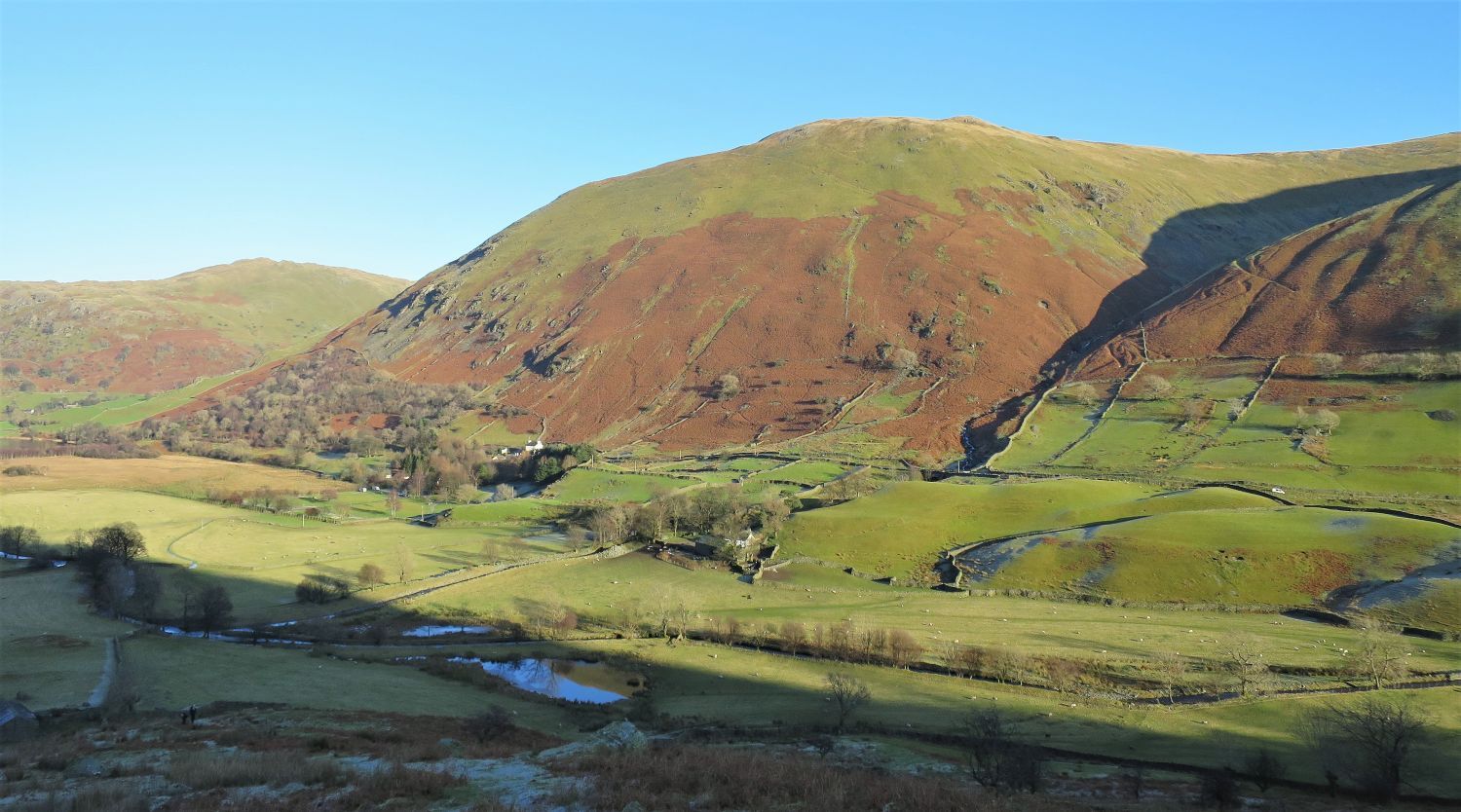 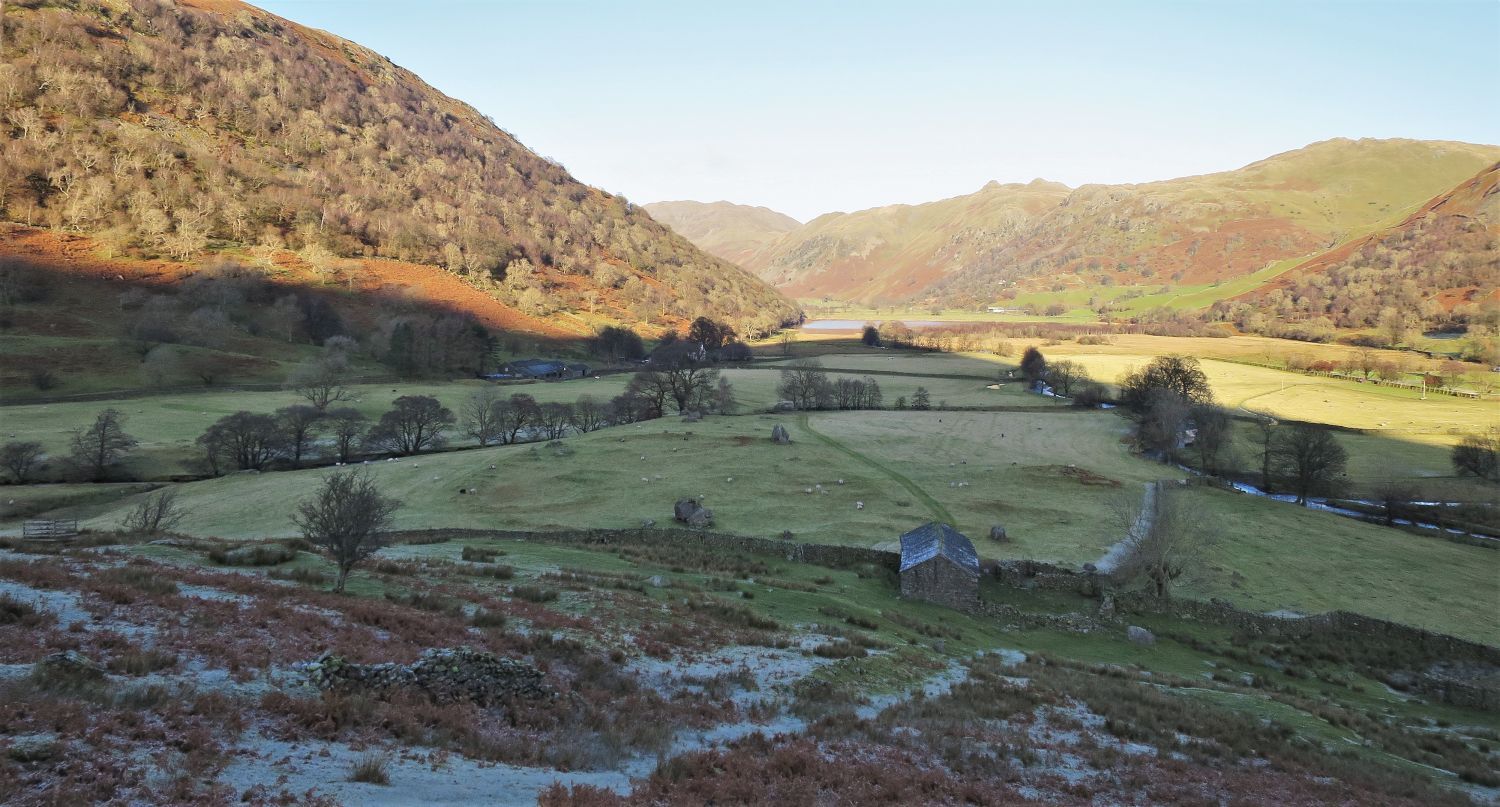 The approach to Hartsop Hall from the foot of the ridge

The “boulder-dotted” pasture is a site of an ancient settlement.

The track leading to Brothers Water and back to Cow Bridge