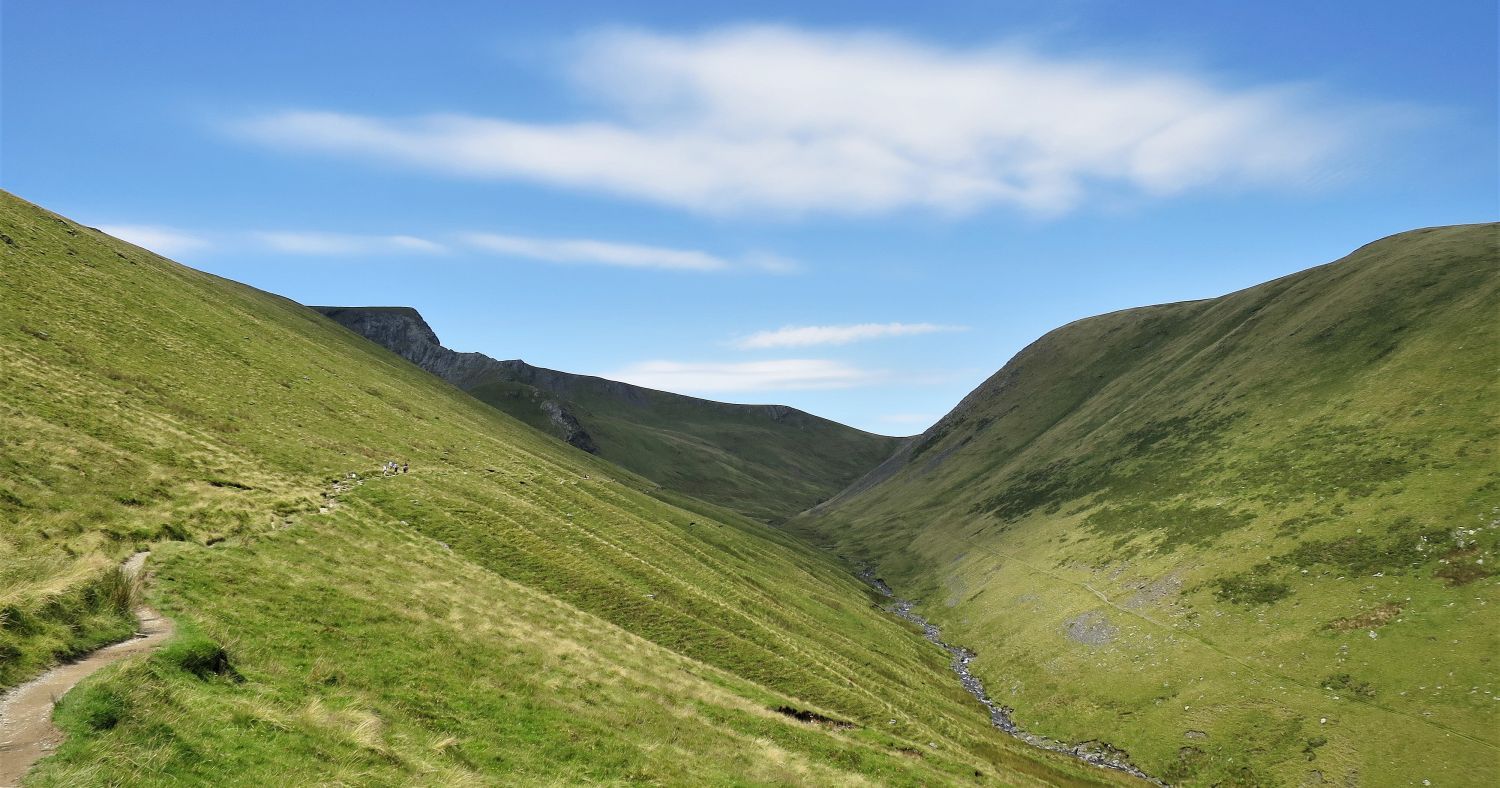 For me, the best area to walk at the height of summer is the northern part of the district. These grassy fells, especially at the back of Skiddaw and Blencathra, can be very rewarding in views and remoteness. This walk, from the village of Mungrisdale, circuits the side-valleys of Bullfell Beck and Bannerdale, and the deep valley of Glenderamackin. 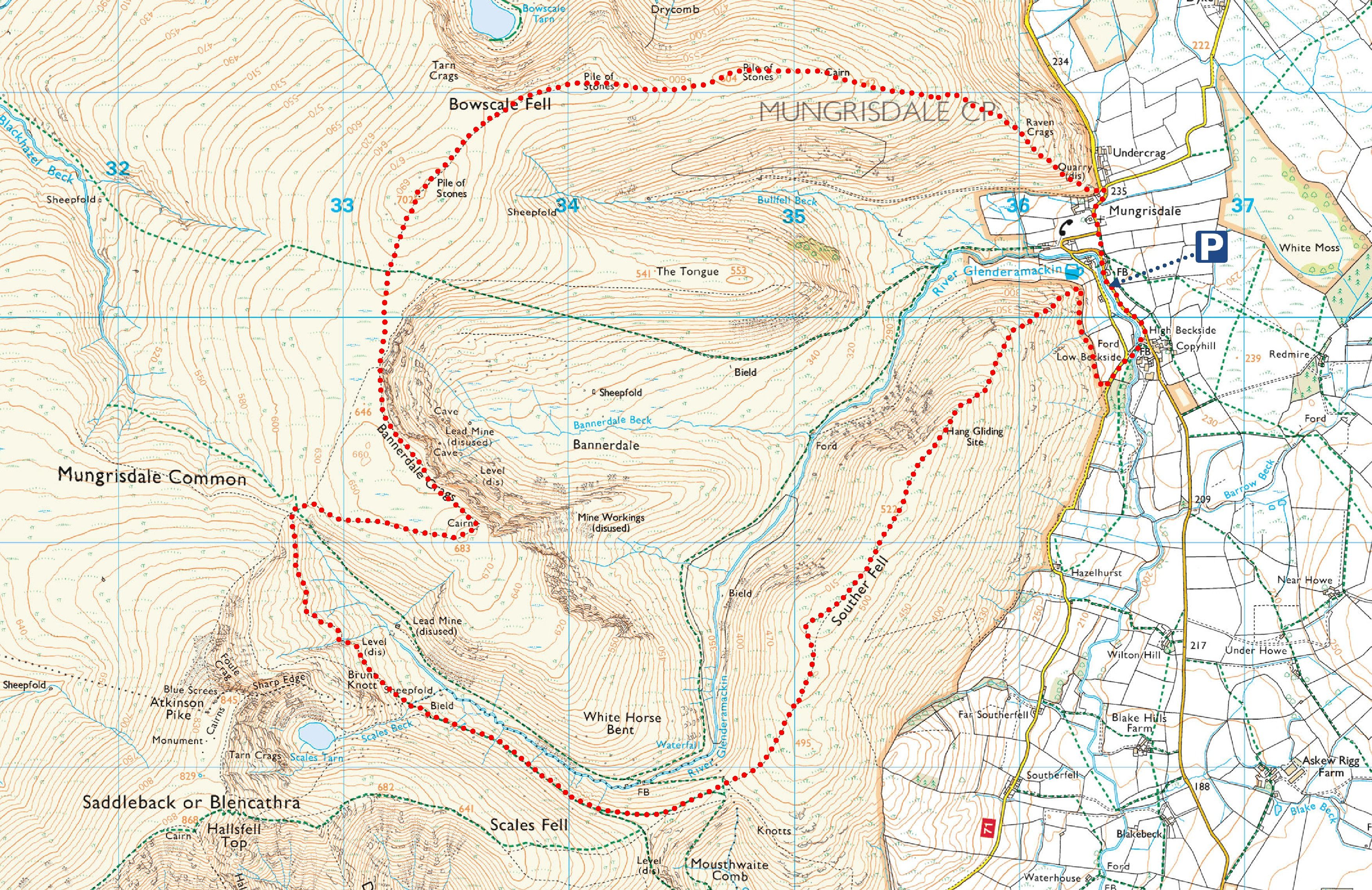 A well-maintained grass verge, on the south approach to Mungrisdale Village, has been kindly provided for about six cars or so. There is also a parking area opposite the village hall. Honesty boxes are located at both locations.

“You are kindly requested to make a parking donation of £2 towards the upkeep of our village greens. Thank you.”
Mungrisdale Parish Council

After a short walk through the village the whole of Bowscale Fell’s east ridge is seen over the valley of Mungrisdale. Raven Crags, on the right, is the starting point of the climb.

There have been several buildings at this site since about 550 AD; the present church was built in 1756, and restored in 1925.

“St. Kentigern, a 6th-century apostle of the Kingdom of Strathclyde, was also known as Mungo, which is how Mungrisdale gets its name.” Bowscale Fell 4
CH

“Climbing starts at once over a pleasant alp of gorse and bracken and grey rock….” Bowscale Fell 6
AW

Souther Fell (left), Bannerdale Crags (centre) and The Tongue (right) over the valley of Mungrisdale

“The most striking object is the shapely pyramid of the Tongue….Left of the Tongue the view is closed by the precipitous front of Bannerdale Crags” Bowscale Fell 5
AW 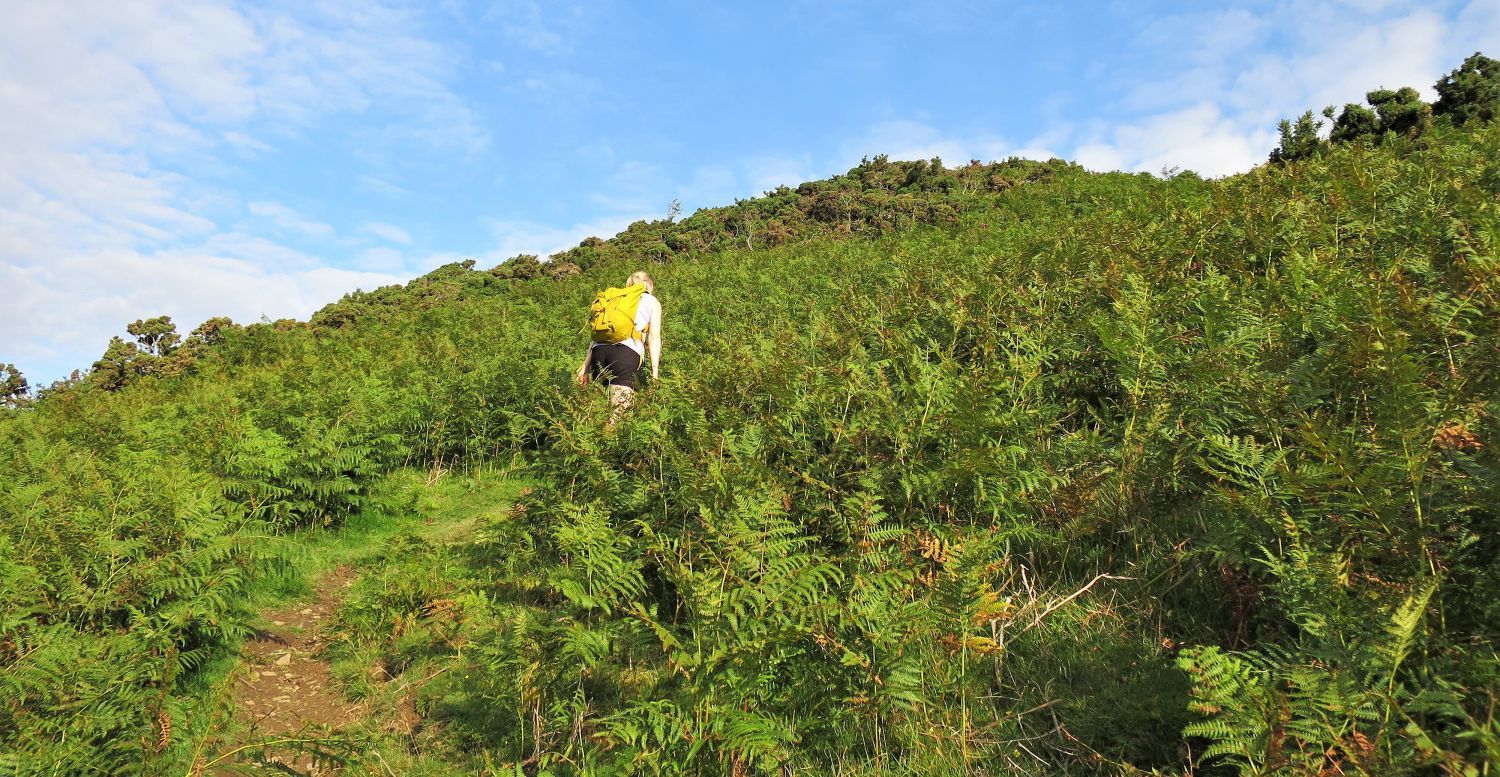 Jaclyn on the ascent of Raven Crags

The initial climb of Bowscale Fell’s east ridge is a rough steep stony track through gorse and bracken. 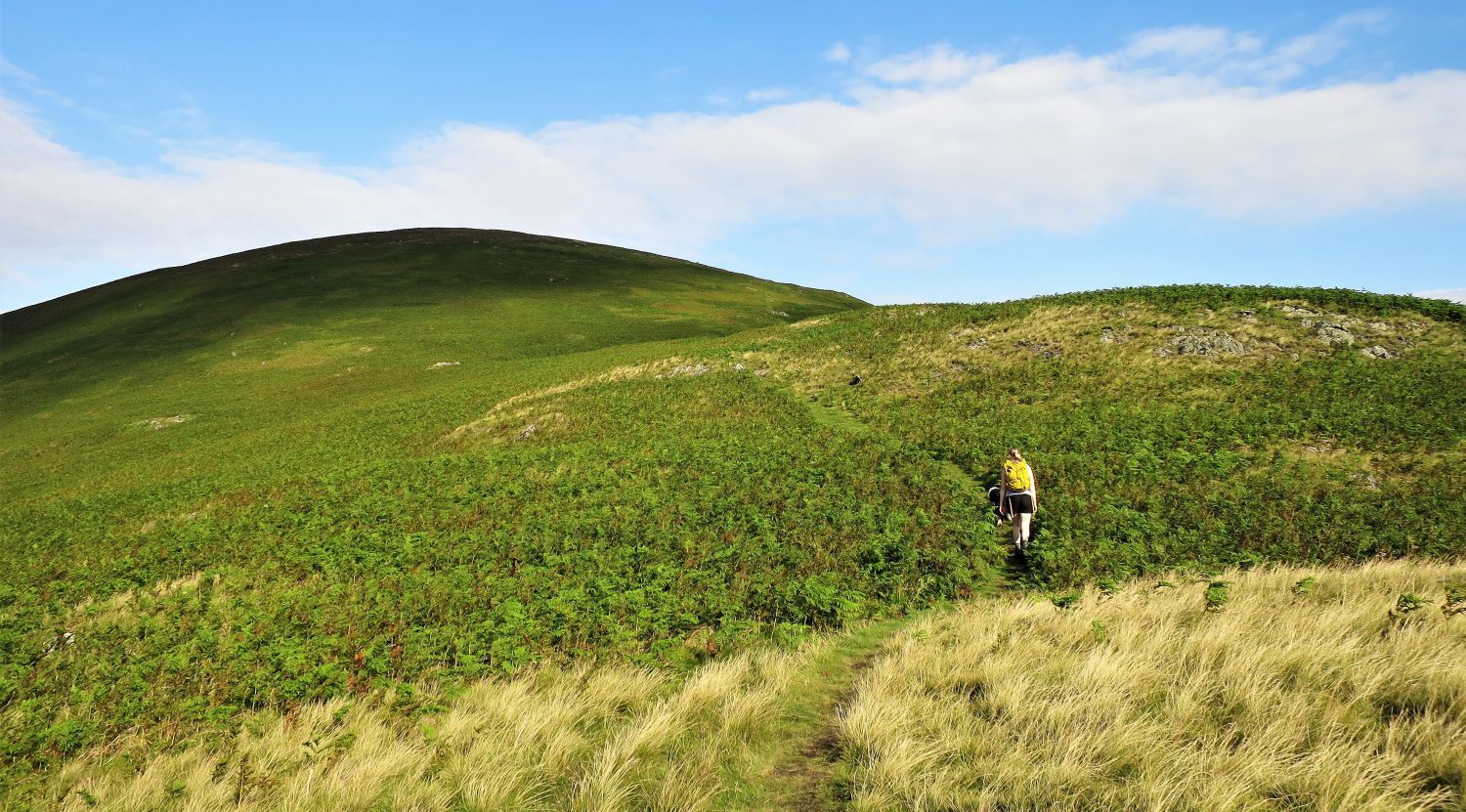 The continuing ridge from the top of Raven Crags

Bowscale Fell and the approach to the ‘first top’

After the initial steep section of Raven Crags is conquered, the continuing ridge is much easier walking, however, even though only the tip of Bowscale Fell can be seen ahead, the remaining ridge is a series of cairns, minor summits and saddles.

“….there is a gentle rise to the heathery ridge, a grouse moor, and two further undulations before the top of the fell is reached.” Bowscale Fell 6
AW

From the first cairn on the east ridge (1778′), the continuing ridge is a delightful walk.

Carrock Fell (once an ancient fort) dominates the view to the north, while the vast plain of the Eden Valley spans across to the east. 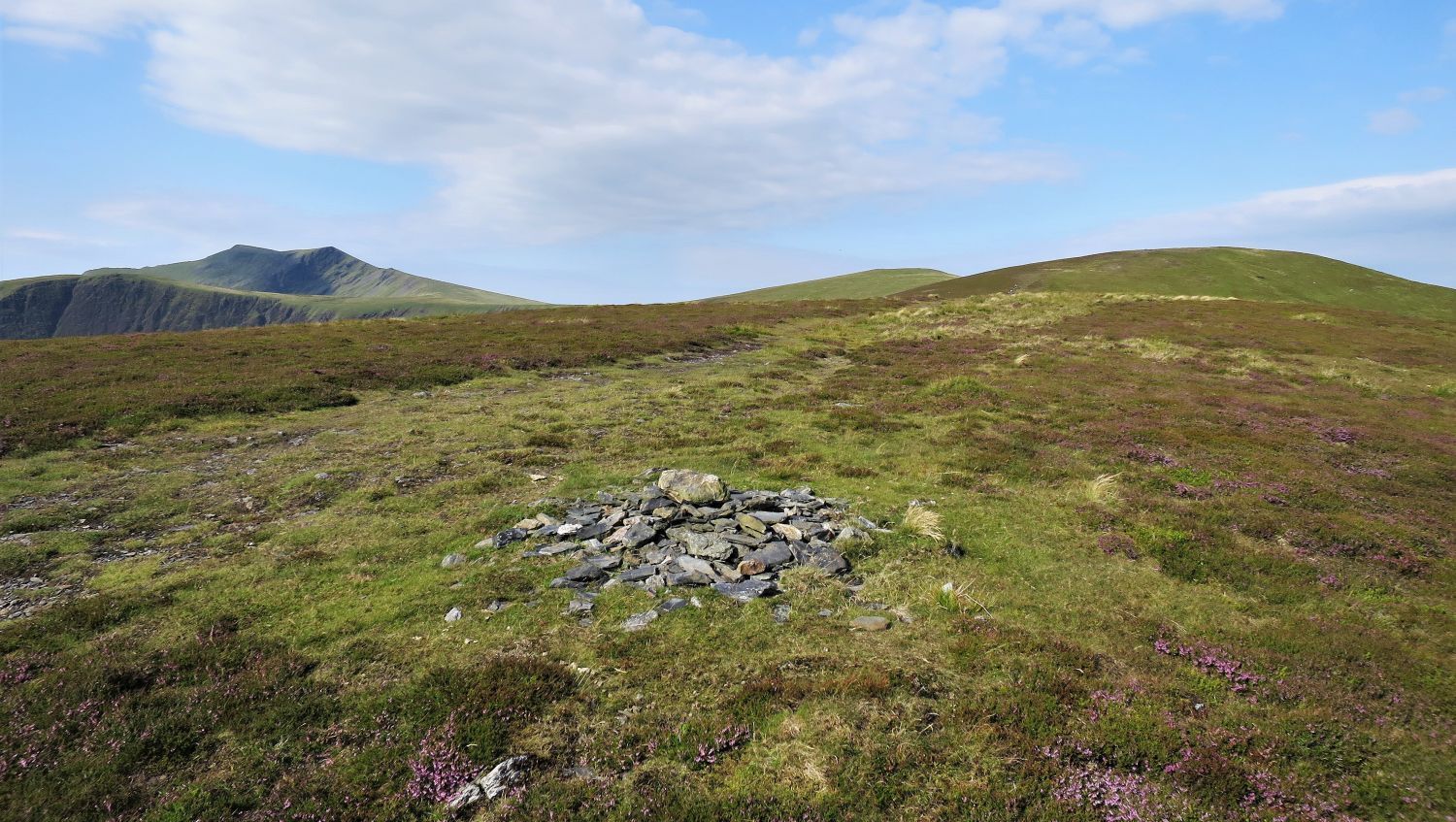 On arriving at the second cairn (1876′), the summit of Bowscale Fell (right of centre) seems much closer; Blencathra is seen on the left and the ‘subsidiary summit’ on the right. A third cairn at 1982′, marked “pile of stones” on the OS map, is the highest point of the ‘east top’. 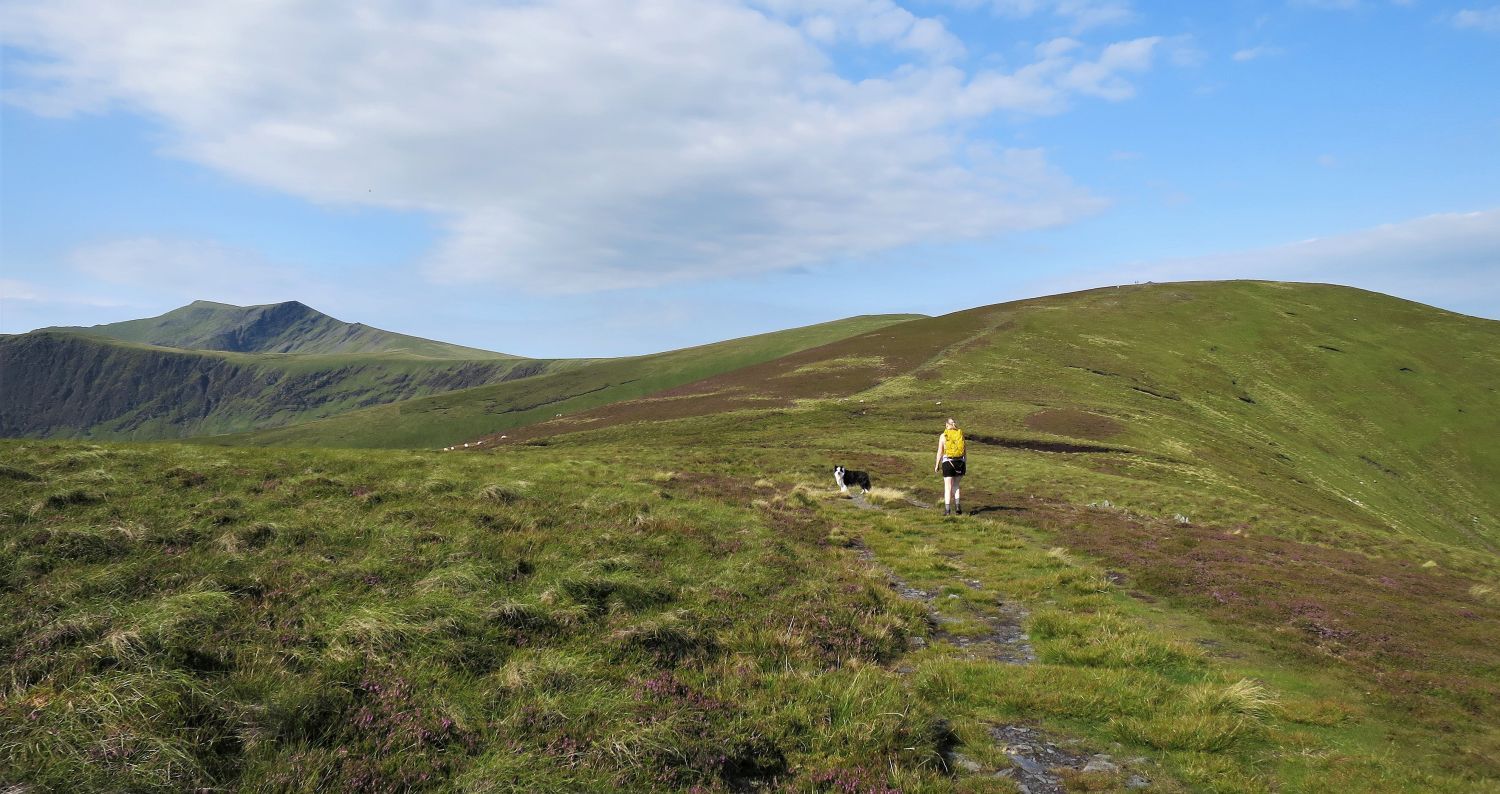 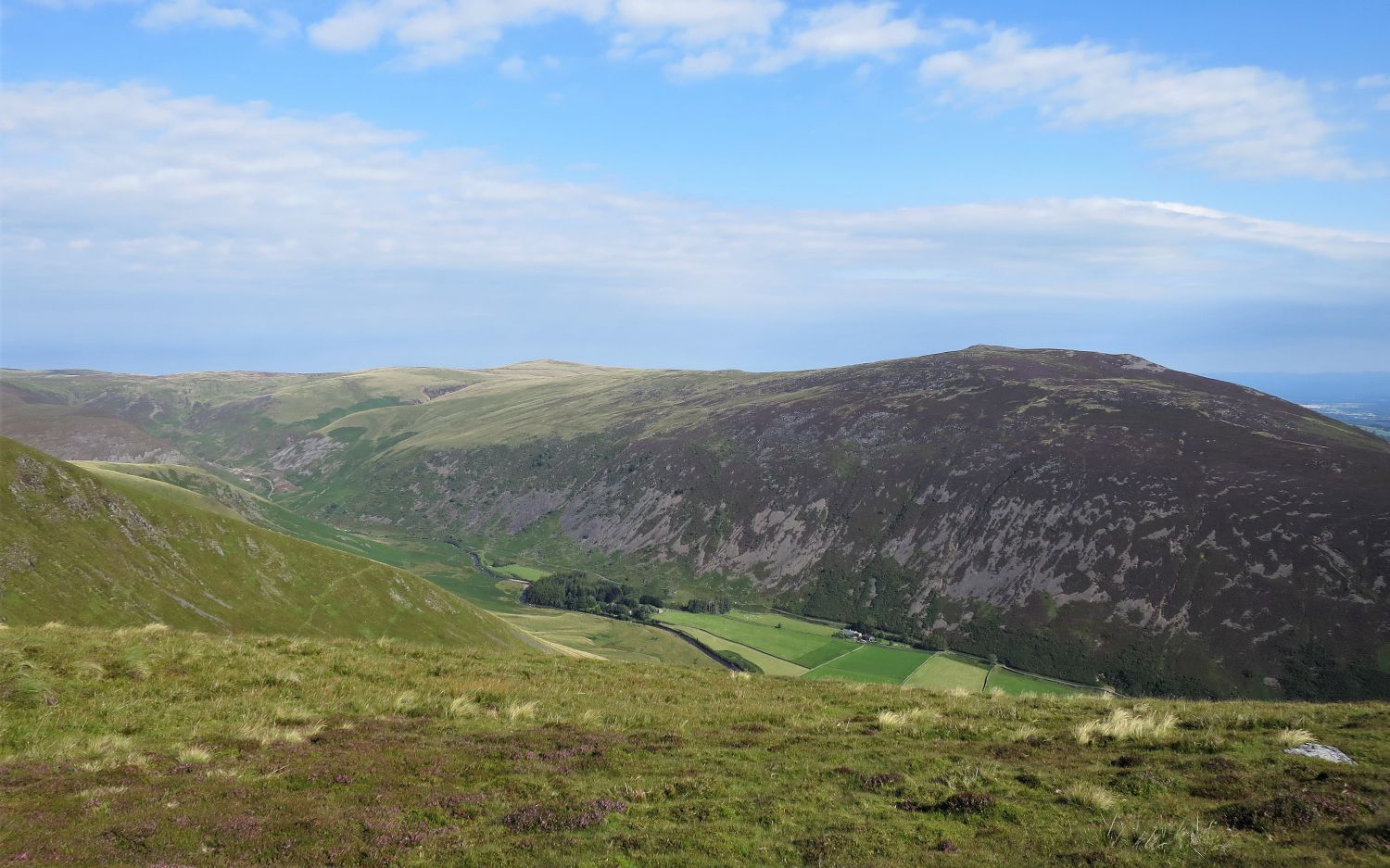 Bannerdale Crags and Blencathra from the ‘subsidiary summit’

The largest of all the cairns on Bowscale Fell’s east ridge, is to be found on the approach to the highest point of the subsidiary summit.

Blencathra and Bowscale Fell seen from the highest point of the ‘subsidiary summit’.

“The second of these undulations is big enough and high enough (over 2200′) to be regarded as a subsidiary summit.” Bowscale Fell 6
AW

Looking back to Carrock Fell and the ‘subsidiary summit’ 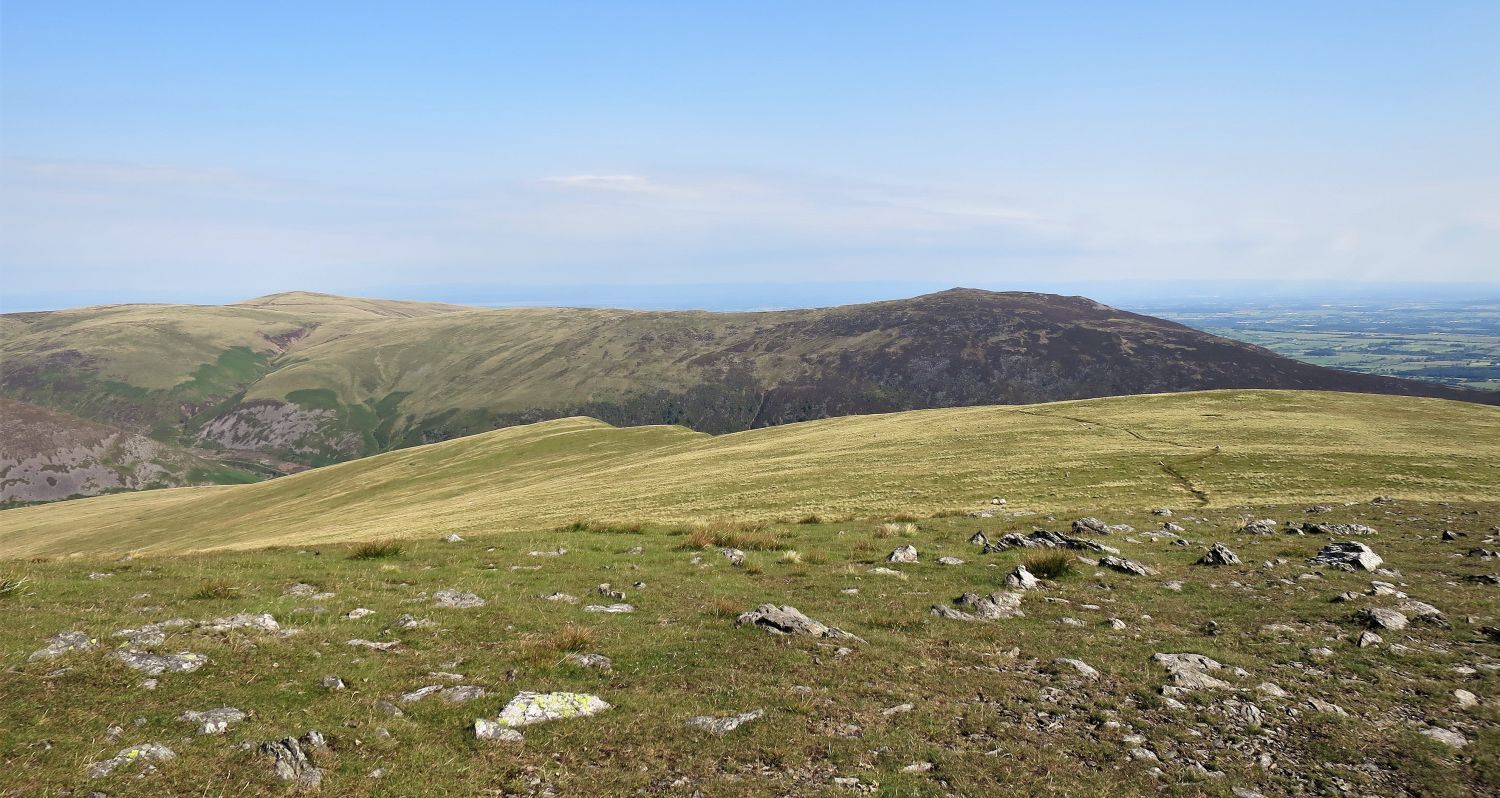 The summit of Bowscale Fell from the north-east cairn

“What appears from a distance to be a big square cairn….” 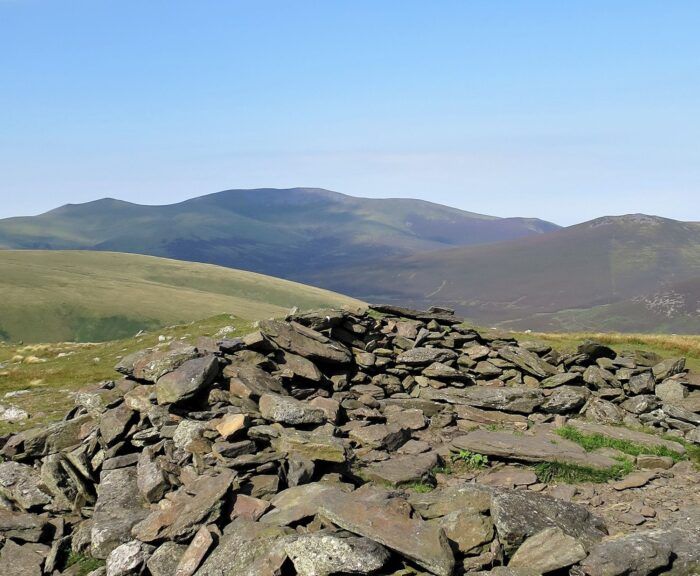 “….turns out on closer enquiry to be a rough-built shelter.” Bowscale Fell 8
AW 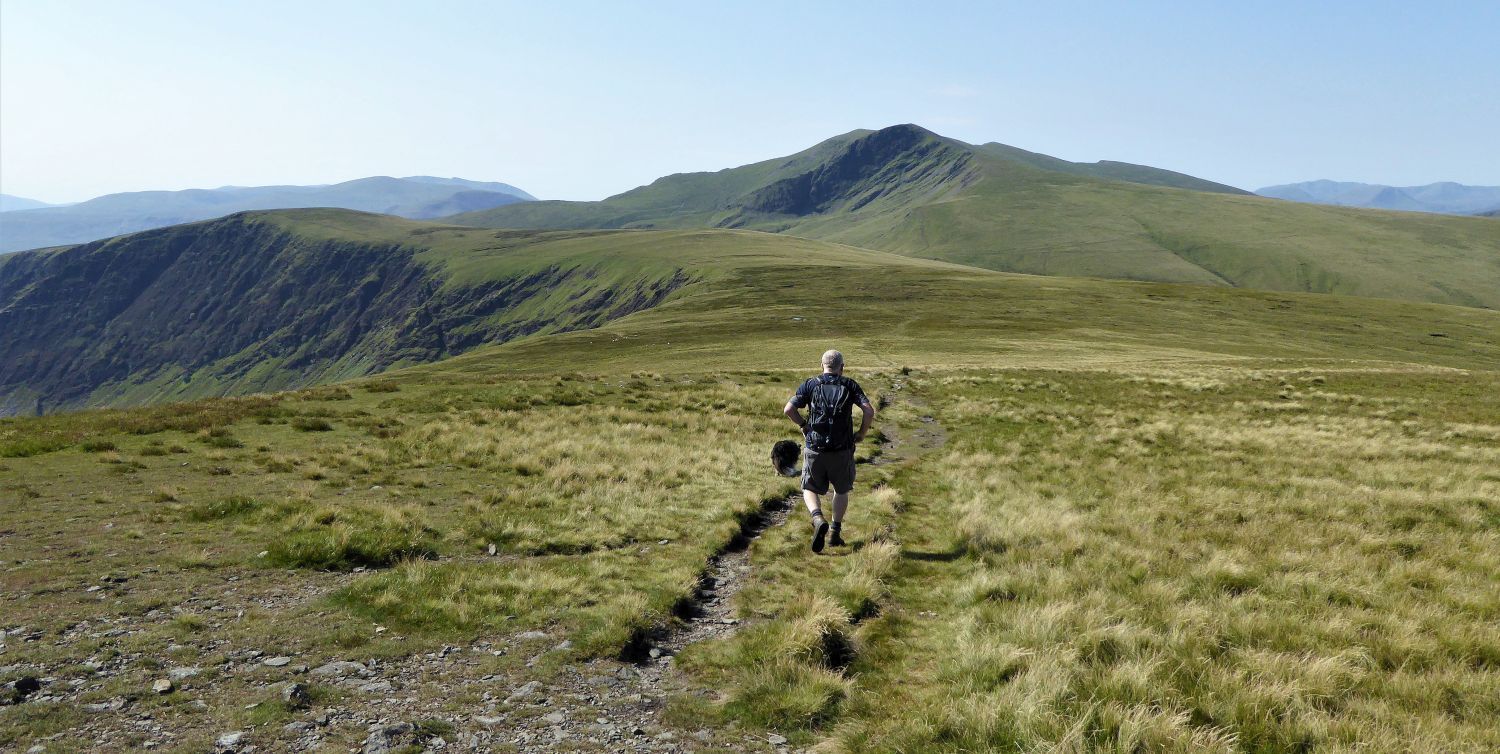 Blencathra from the ridge to Bannerdale Crags

From the track head left to avoid swampy ground.

“An extensive area of marshy ground and pools is best skirted on the left, where a useful sheep-track will be picked up along the edge of the escarpment. This route does not keep to the height of land, and is not therefore properly a ridge-route, but it is to be preferred, both for views and firm walking….” Bowscale Fell 9
AW

Looking back to Bowscale Fell from the escarpment 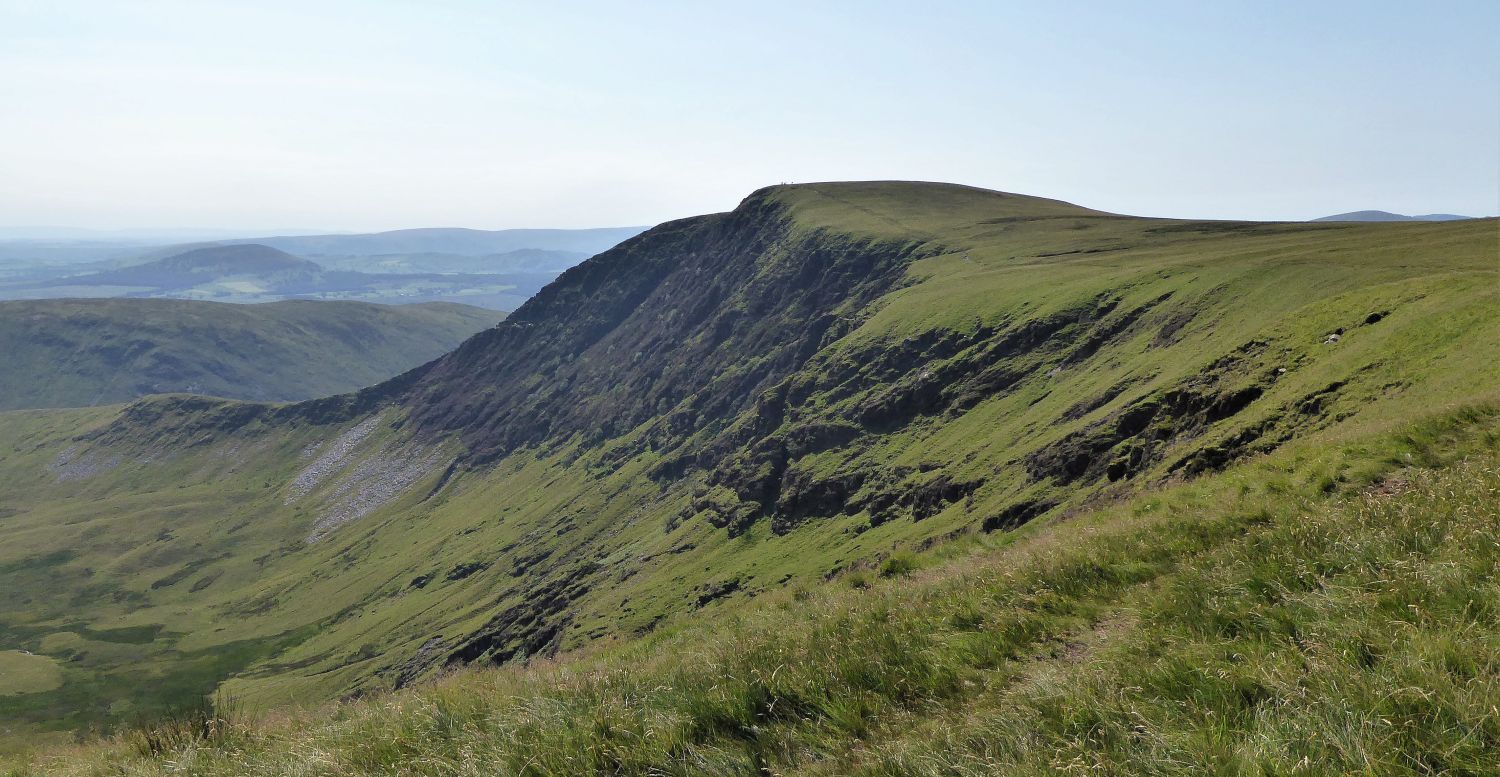 “Few visitors to Lakeland will have seen the crags, which turn their back on the district and are quite concealed from all places and viewpoints of popular resort.” Bannerdale Crags 2
AW 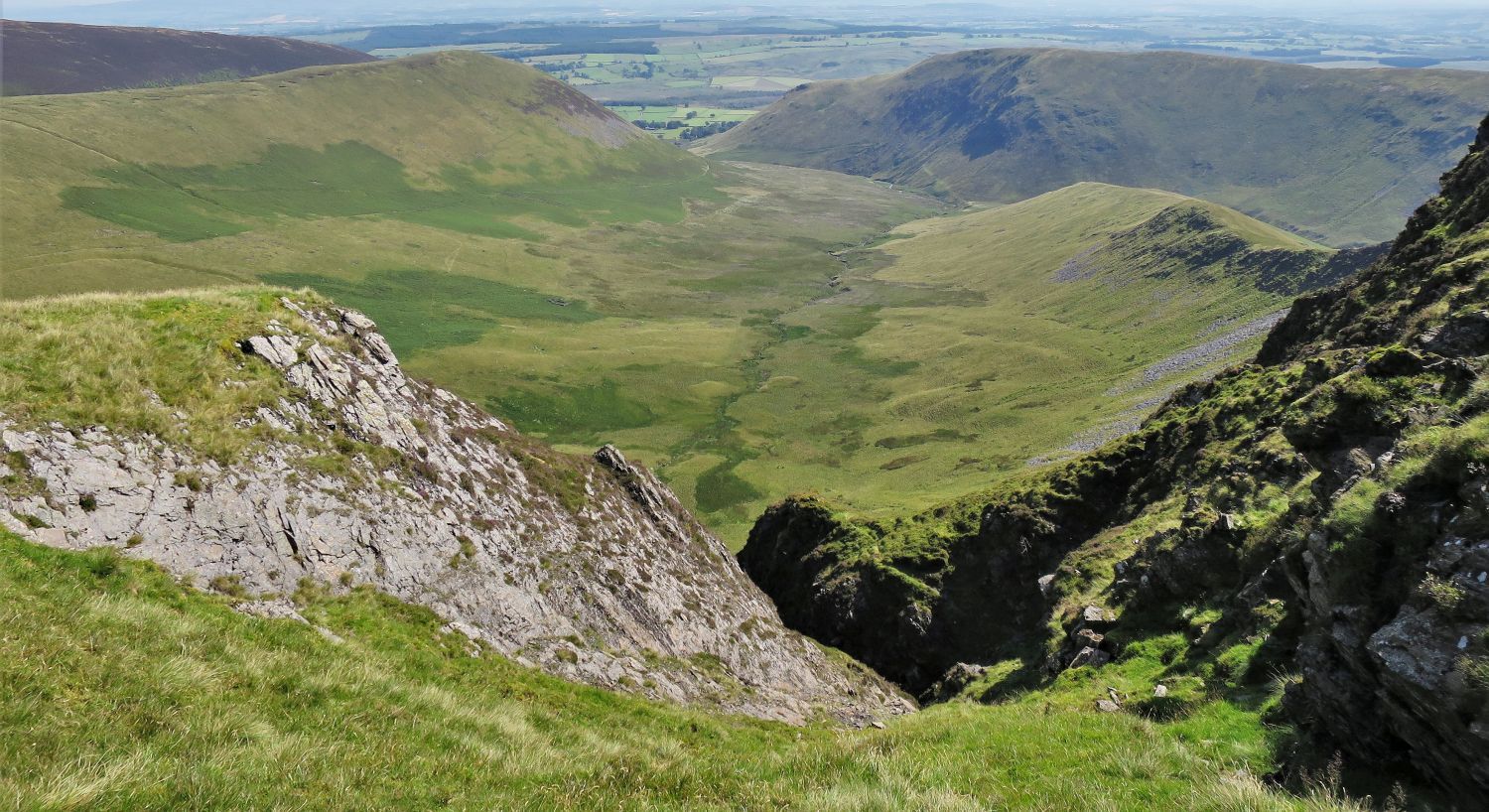 Looking down into Bannerdale from the escarpment 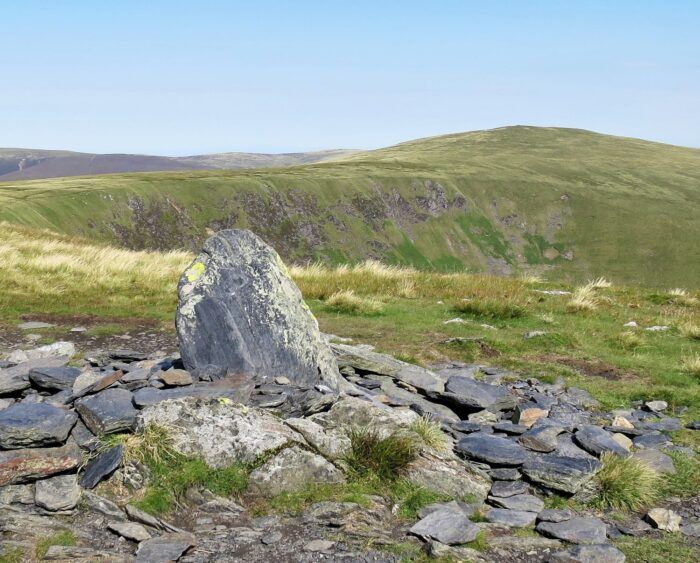 “….the main cairn is excellently sited near the edge of the great downfall into Bannerdale, and the crater-like rim in view to the north is magnificent.” Bannerdale Crags 8
AW

Blencathra from the ‘true summit’ of Bannerdale Crags

“There is a second cairn on the highest point which is no more than a pile of stones.” Bannerdale Crags 8
CJ

The descent to Glenderamackin Col from Bannerdale Crags is very pleasant walking. From there take the right-side traverse down the valley of Glenderamackin; a fell walker can be seen on this traverse. 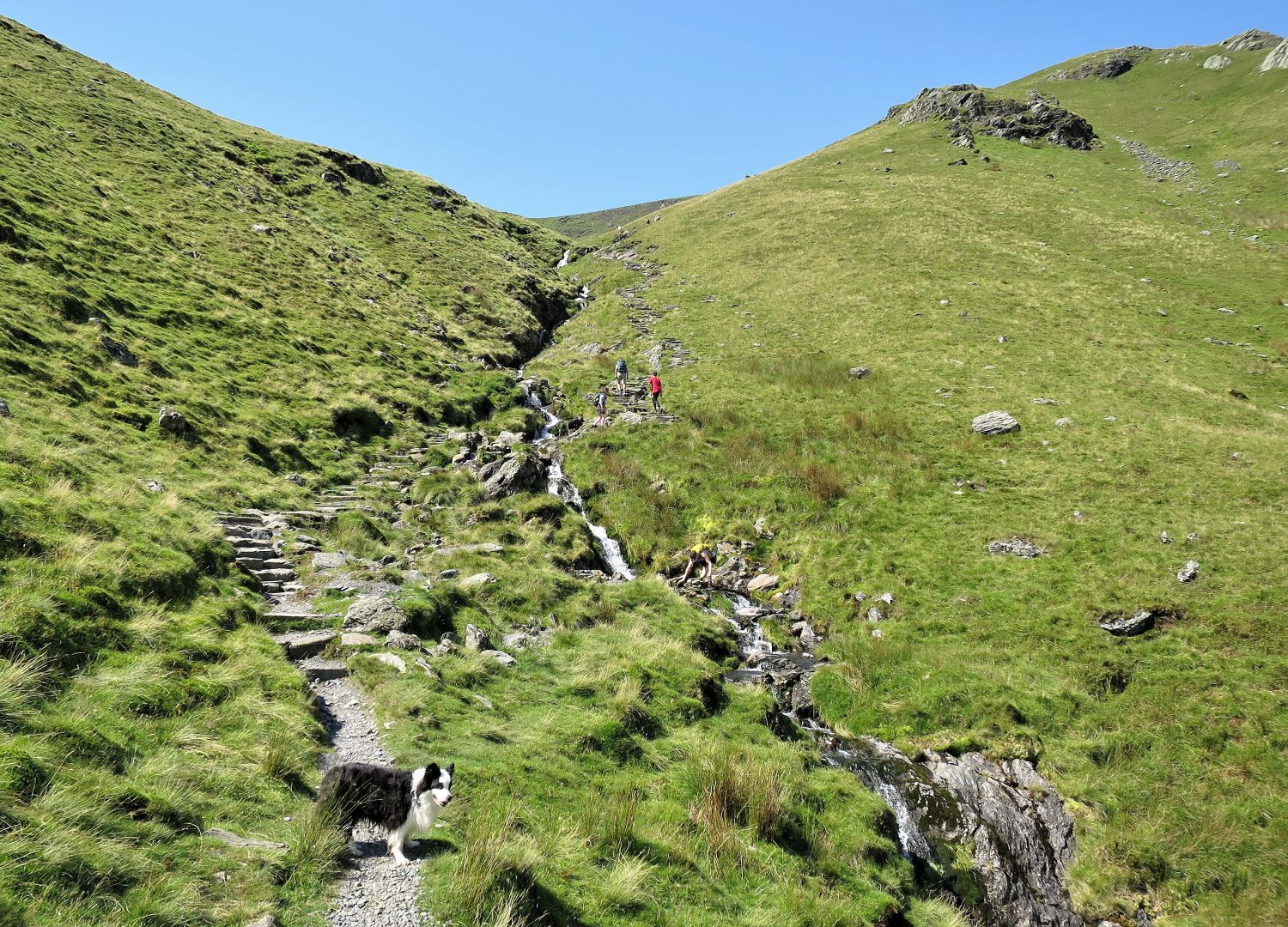 Once Scales Beck is crossed, you will pass many fell walkers heading to Sharp Edge and Blencathra. 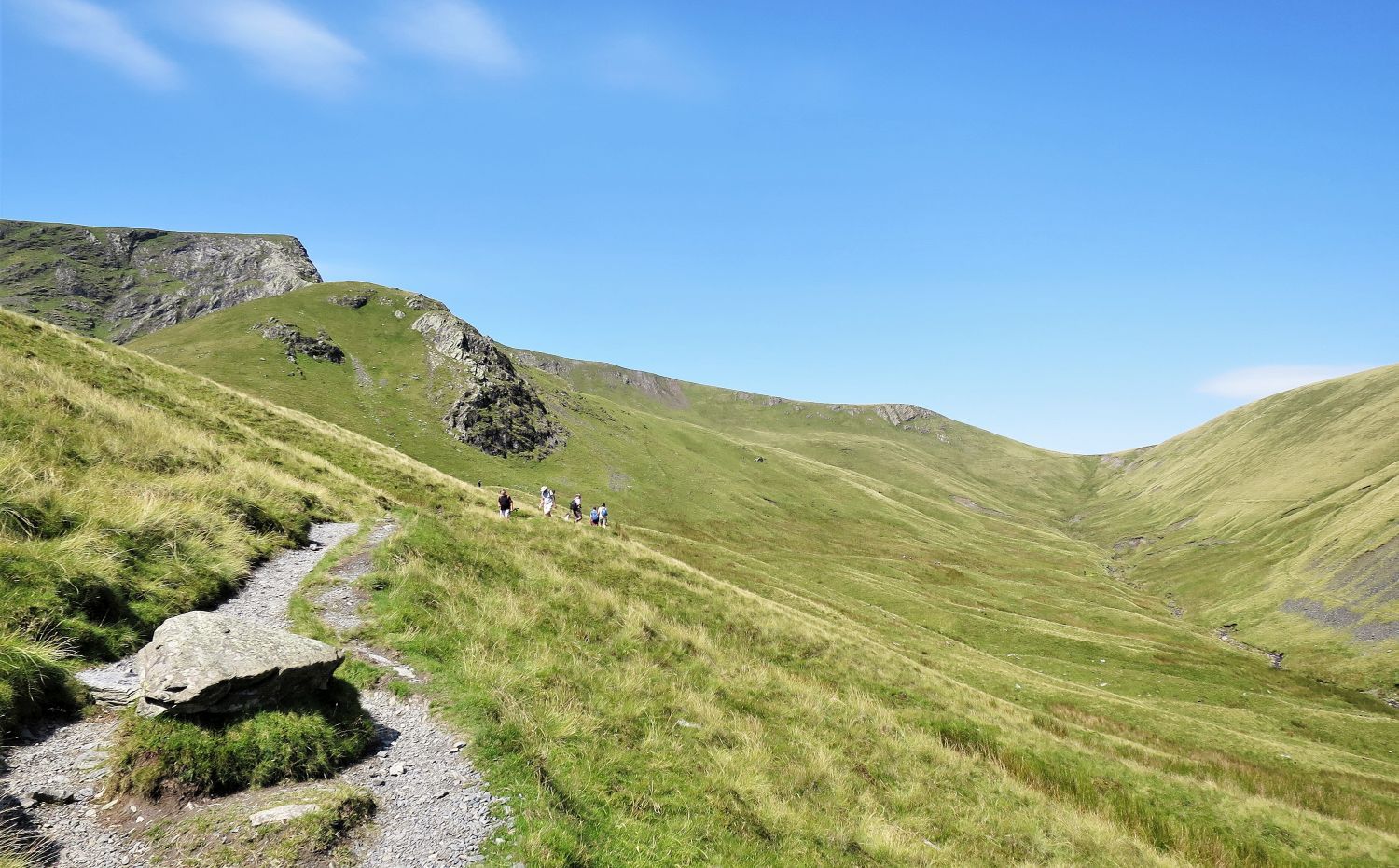 Looking back to Brunt Knott and Glenderamackin Col

Souther Fell from the approach to Mousthwaite Col

The reason for following the traverse on the right-side of the valley, is so no height is lost on the approach to Mousthwaite Col and Souther Fell. 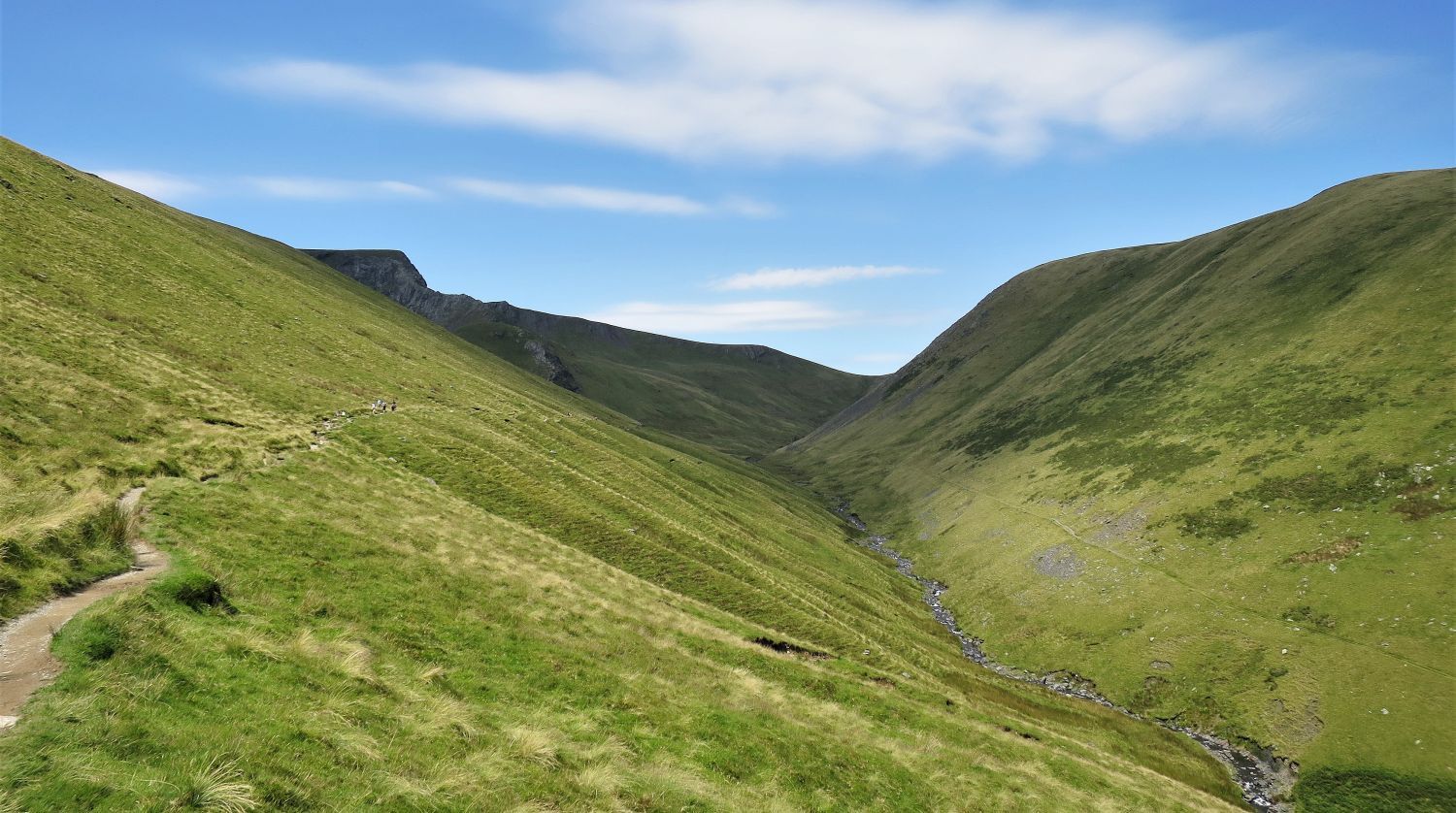 Looking back up the valley of Glenderamackin

The dramatic outline of Sharp Edge looms over the head of the valley.

Pleasant walking now and only a small rise onto Souther Fell.

Looking back to Scales Fell, Blencathra and the south ridge of Bannerdale Crags

“A study of the Ordnance map shows that Souther Fell is really a ridge of Blencathra, a continuation of Scales Fell across the depression of Mousthwaite Col, and there is thus an obvious link with that mountain.” Souther Fell 5
AW

Once the main ridge is gained, follow the path slightly left to visit a well-built cairn with a splendid view. 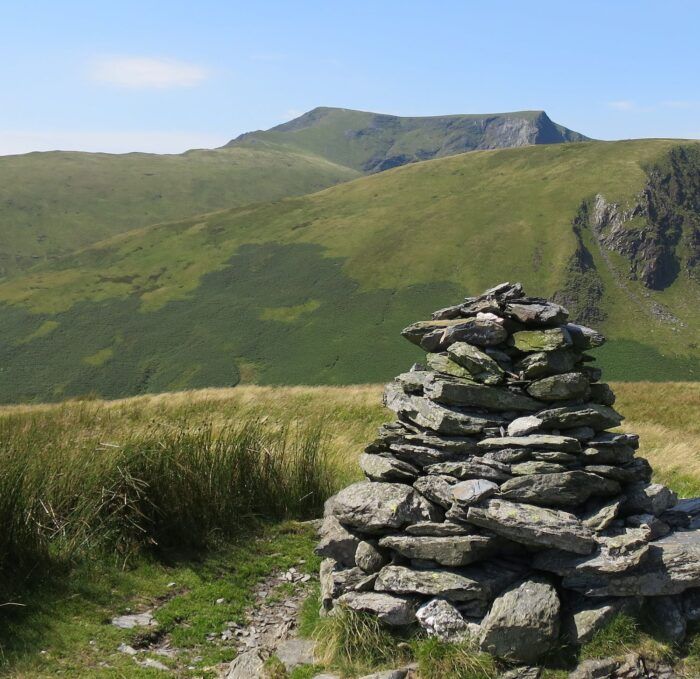 “The top of the fell is an undulating grass ridge at around 1600 feet for half a mile.” Souther Fell 7
AW

The ‘true summit’ of Souther Fell

It’s worth noting at this point that there are three descent routes to the village of Mungrisdale. From the ‘true summit’, head back south-east a few hundred yards and look out for a path that descends the eastern flank of the fell, or, continue along the summit ridge to the north-east ridge, where two paths descend more directly to the village. 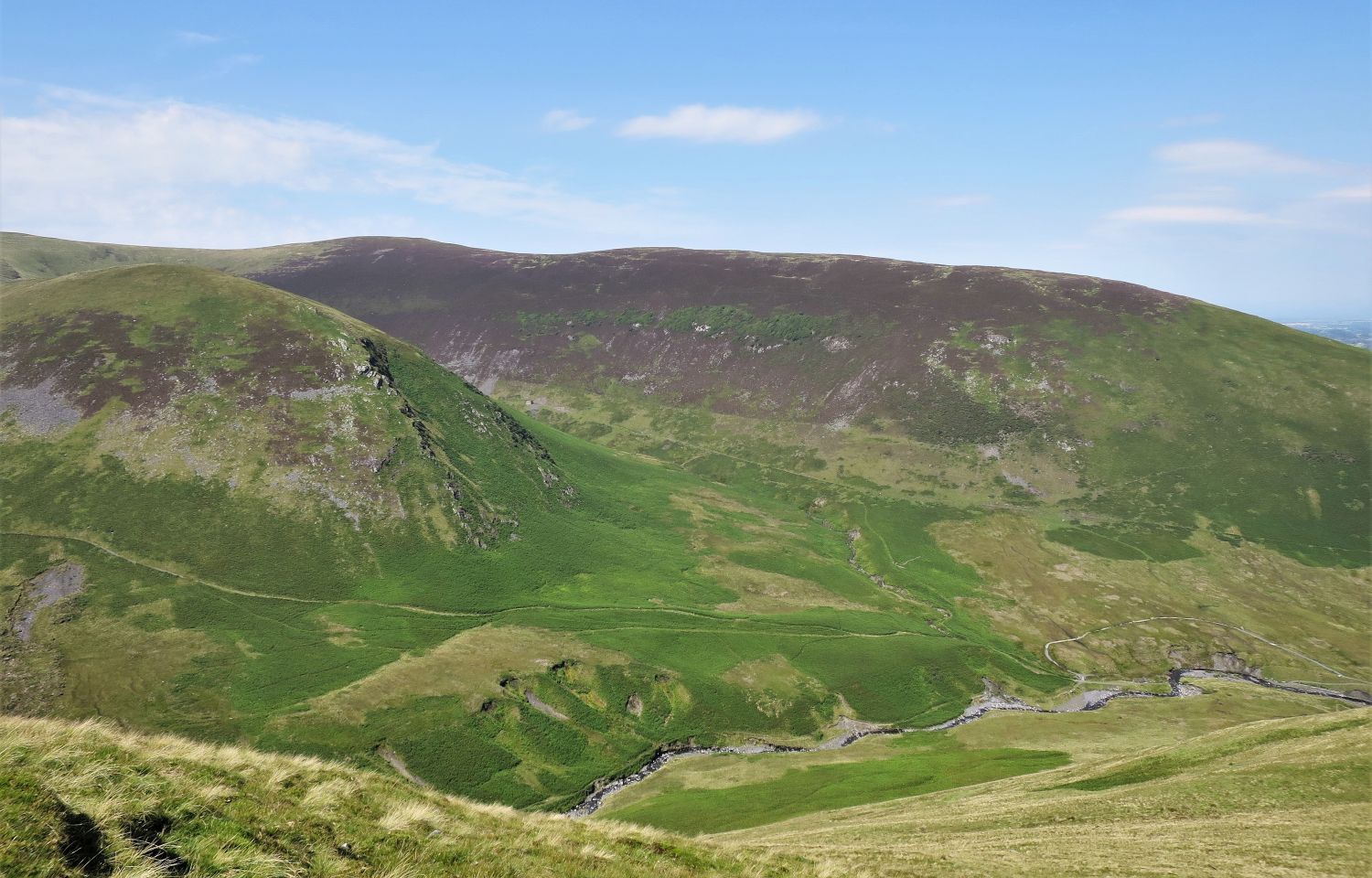 Beckside, the group of buildings on the right, is our next objective. 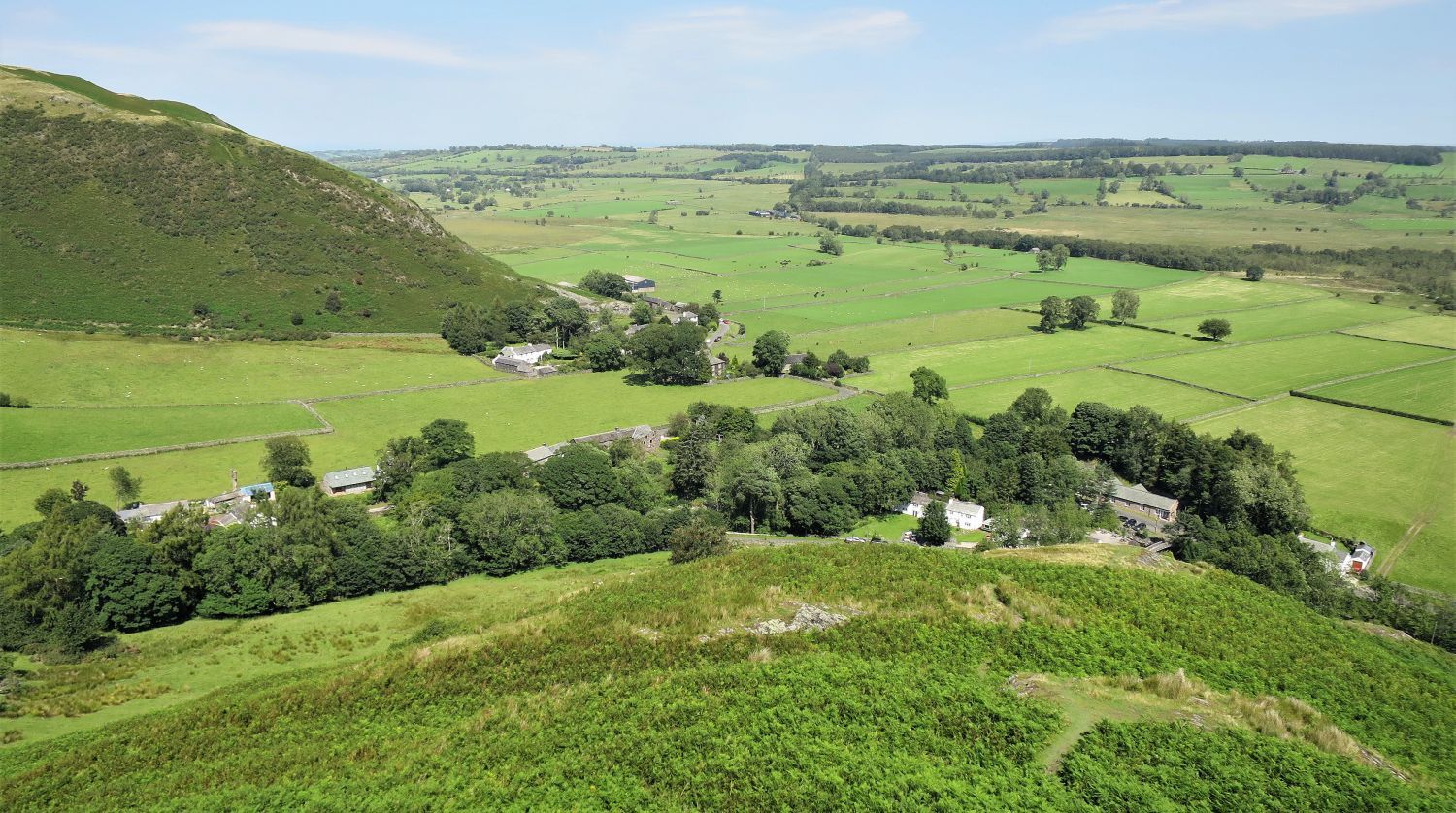 The village of Mungrisdale from Souther Fell’s north-east ridge

Halfway down the north-east ridge, a path on the right takes a direct route to Beckside, however, it can be tricky to find in the bracken during the summer months. You also have the option to continue down the ridge and then follow the wall back to Beckside (see map). 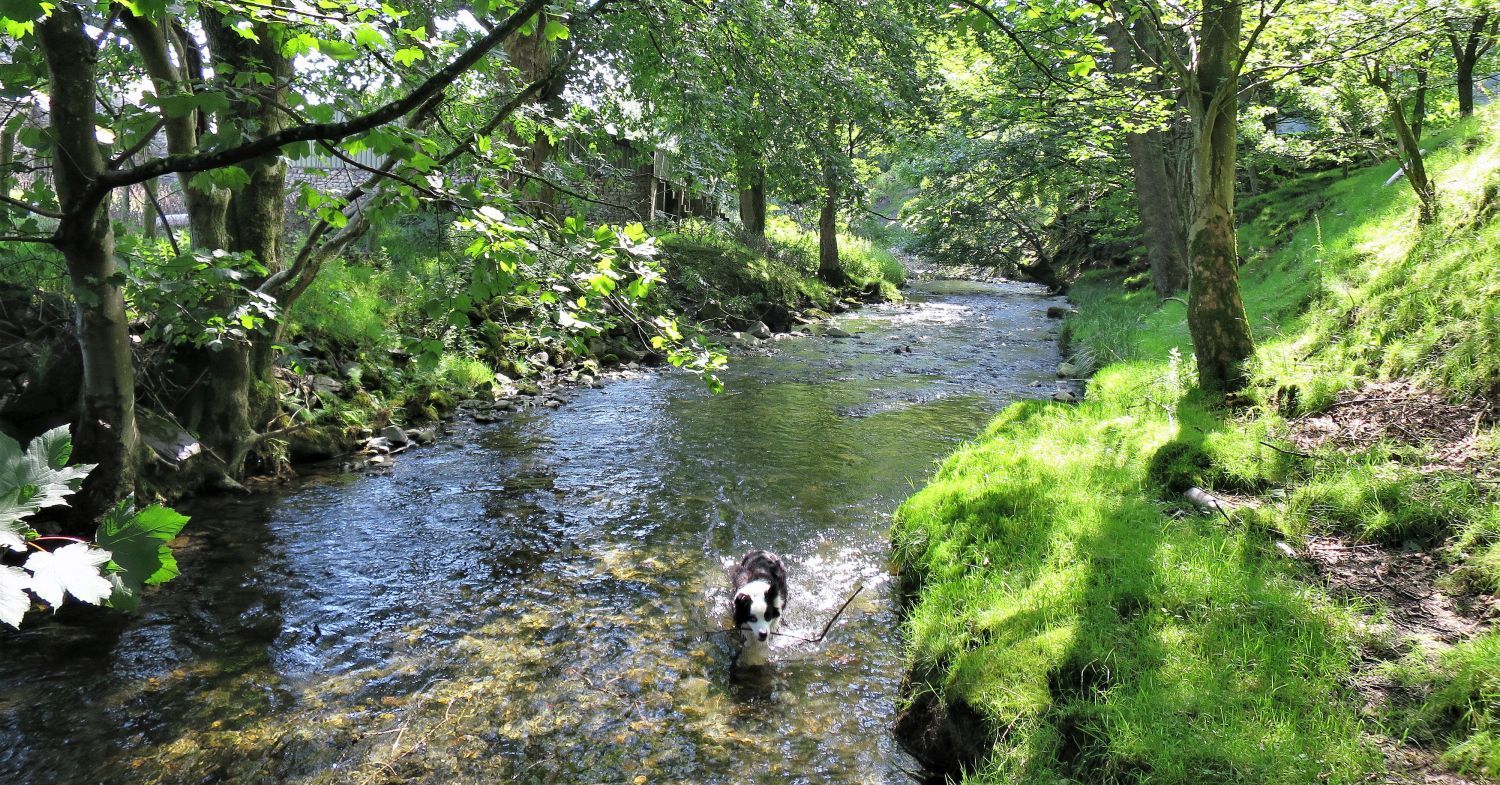 Frankie enjoying a well-earned dip in the River Glenderamackin